Reconstruction of extensive upper extremity defects with local or regional flaps is challenging. This case report presents a patient with an enlarging and easily bleeding irregular mass at the right distal dorsal-radial upper arm since months. A MRI revealed a 11 × 10 cm ill-defined lobulated soft tissue mass. An ultrasound guided core biopsy of the right arm showed histological features favor of a high grade malignancy, suspicious for Merkel Cell carcinoma. A complete excision of the lesion was performed followed by a double bipedicled fasciocutaneos flap. The double bipedicled flap is a reproducible flap for extensive upper arm defects and no former publications were found using this type of flap for upper extremity defects.

Extensive defects between the shoulder and elbow area are technically challenging with limited reconstructive options. A pedicled latissimus dorsi muscle flap or musculocutaneous flap may cover such defects but with a donor side morbidity and degree of weakness with reduced mobility at the shoulder. Its use is further limited in extensive distal defects of the upper arm. Skin grafts have less tolerance to postoperative radiotherapy, lack volume and will not survive on exposed less vascularized tendon or bone areas [3-5].

The author (MPJ Loonen) describes a reconstruction of an extensive upper arm defect after excision of a Merkel Cell carcinoma using a double bipedicled fasciocutaneous flap.

A 56 year old Pakistani man presented an enlarging and easily bleeding irregular mass at the right distal dorsal-radial upper arm for months. A MRI revealed a 11 × 10 cm ill-defined lobulated soft tissue mass. The lesion appeared close to the adjacent muscle in T1 with hyper intense foci and was heterogenously hyperintense in T2 with a feeding vessel (Figure 1).

Figure 1: Preoperative overview of the lesion.

Wide excision of the tumor was performed with superficial muscle fibers of the triceps brachii muscle by the oncology surgeon. Histopathological evaluation revealed tumor free margins with lymphovascular invasion (pT3NxMx). A Sentinel node biopsy showed no tumor cells. The final size of the defect was 12.5 × 11.5 cm.

The width of each flap was 50% of the width of the defect. The height of each flap is 75% of the height of the defect. The vascular perfusion of the flap was maintained using this flap ratio. Increasing the flap height may be indicated in case tension is experienced during closing of the flap of both flaps in the middle part but may limit the vascular perfusion of the flap (Figure 4). The fascia was approximated at the medial part of both flaps using PDS 3-0® sutures. The skin was approximated using PDS 4/0® deep dermal sutures. A Monocryl 4-0® intradermal suture was used. The donor defects were reduced in size using a PDS 4/0 purse string deep dermal suture. The remaining defects were closed using non-meshed split-thickness skin grafts with drainage openings made in the grafts. The grafts were fixated using Vicryl Rapide 5-0® transcutaneous sutures. The small dog ears were not corrected at the cranial and caudal ends of the flaps to prevent interruption in the flap perfusion. Dog ear correction can be completed 4-6 months postoperative. A subcutaneous drain was placed and removed when the drainage was less than 25 cc/24 hours (Figure 5). A light compressive non-adhesive dressing was placed on the skin grafts and removed 5 days after the surgery. No pressure was applied on the bipedicled flaps.

Figure 4 and b: Perioperative aspects before sealing of the defect with the double bipedicled fasciocutaneous flap.

Figure 5: Postoperative aspect after closure of the defect with the double bipedicled fasciocutaneous flap. 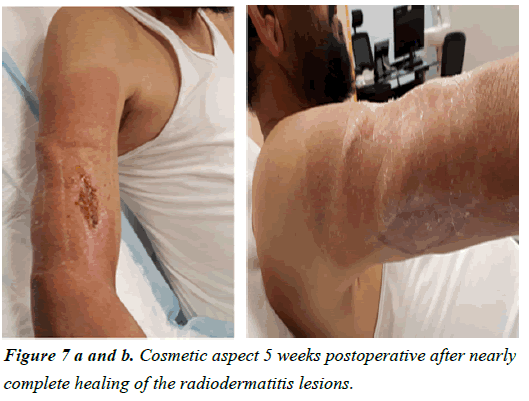 The double bipedicled flap is a reproducible flap for extensive upper arm defects.