Dot Enzyme Linked Immunosorbent Assay (Dot-ELISA) was standardized and evaluated to detect anti-Oesophagostomum antibodies in sera of sheep by using three different antigenic components obtained from the parasite Oesophagostomum i.e., Crude Somatic Antigen (CSA), Excretory Secretory Antigen (ESA) and Larval Antigen (LA). Dot ELISA was standardized at an antigenic concentrations of 0.06 μg CSA, 0.3 μg of ESA and 0.1 μg of LA with sera at 1:100 dilution with Phosphate buffered saline with Tween-20 (0.1% PBST), using sheep anti-rabbit antibodies with horse radish peroxidase enzyme as conjugate at 1:5000 concentration and di-amino benzedine as substrate. The sensitivity, specificity of test were 73.33%, 66.67% by using CSA; 80%, 72.22% by using ESA and as 40%, 66.67% by using LA with statistically significant p value (p<0.05). By using this test 22.01, 10.02, 5.5 were percentage positives detected respective to their antigens, crude somatic antigen, excretory secretary antigen and larval antigen.

Oesophagostomosis is one of the prevalent and pathogenic gastrointestinal nematode infections of livestock in India (Gupta et al., 1987., Singh et al., 1997), affecting their large intestines causing nodular worm diseases and often resulting in vast economic losses due to condemnation of intestines and also resulting in poor growth rate however prepatent stages of Oesophagostomum species are primarily involved in the pathogenic effects which can’t be diagnosed by conventional methods. Microscopic examination of eggs in the faeces is not reliable as the morphology of Oesophagostomum egg is similar to all stroyngle eggs, although L3 identification obtained through copra culture of eggs is reliable but is a difficult and laborious task. Also the egg stage is detected only after patency of approximately 41-45 days, till then the prepatent stages of parasite cause major damage to the host. Therefore it is essential to detect infection at early stages; therefore there occurs a need to develop immunodiagnostic tests which are more reliable and precise in detecting the infection rather than identification of egg. Although molecular diagnosis as PCR is confirmatory with high sensitivity and specificity but it is costly. Therefore Dot-ELISA can be used as rapid, reliable and low cost immunediagnostic tool for the diagnosis of the pathogenic stages of Oesophagostomosis under field conditions.

A. Collection of Adult Worms

Intestines with knotty gut lesions or with cheesy nodular lesions along with faeces were collected from sheep (Ovis aries) slaughtered at Chengicherla slaughter house, Hyderabad, transferred to the laboratory and processed by cutting longitudinally and the worms are collected using a tissue forceps from caecum and colon and placed in beaker containing PBS (pH 7.2). The worms were washed several times to remove host material in PBS (pH 7.2) and Oesophagostomum columbianum (as per keys provided by Soulsby, 1982., Singh, 2003) worms were collected.

Three hundred worms of O. columbianum were collected and washed five times in the Phosphate Buffer Saline (PBS) and were finally homogenized in 10 mL of cool 0.15 M Phosphate Buffer Saline (pH-7.2) containing two to three drops of 25 mM Phenyl Methyl Sulfonyl Fluoride (PMSF) stored at -20°C and few drops of 24 mM Ethylene-Diamino Tetra Acetic Acid (EDTA) maintained at 4°C in a glass tissue homogenizer (Jas et al., 2010), disintegrated by sonication (Soniprep-150) at 20 kHz, 1 mA of 5 cycles each of 90 sec duration with four intervals of two seconds each on ice bath. This extract was centrifuged at 4°C at 10000 g for 30 min (slightly modified) and the supernatant was collected as the CSA. Protein concentration of CSA was found to be 3.88 mg/mL according to (Lowry et al., 1951). This crude somatic antigen was aliquoted and stored at -20°C for further use in the assay.

Adult live O. columbianum worms were collected and washed five time in Phosphate buffer saline (pH 7.2), containing antibiotics penicillin (500 IU/mL) and streptomycin (5 mg/mL). Motile worms were transferred to RPMI 1640 medium glutamine amino acid rich containing penicillin (1000 IU/100 mL) and streptomycin (1 mg/100 mL) and cultured at a concentration of approximately fifty worms per twenty mL in a culture flask at 5% carbon dioxide atmosphere at 37°C for 24 hrs. The medium was changed every 6 hrs (fresh medium was added with 2% glucose) when the color of media was turning to yellow (pH of the media shifting to acidic). Worm viability was monitored throughout this period on the basis of motility, integrity of the worms. The culture media was collected by decantation and centrifuged at 4,000 rpm for 15 min to remove gross particles to prevent clogging of filter pores and then the supernatant was filtered through a syringe filter (0.22 μm pore size) from Millipore. Then the culture medium was centrifuged at 10,000 rpm for 30 min at 4°C and the supernatant was labeled as excretory secretory antigen. Finally, the antigen obtained was concentrated by dialysis (membrane cut off, 10 kDa) against polyethylene glycol (PEG 20000 SRL, India) in 8% solution over a period of 6 hrs at 4°C. The concentrated material was added with 1 mM Phenyl Methyl Sulfonyl Fluoride (PMSF) and 1 mM Ethylene diamine tetra acetic acid (EDTA) and stored at -20°C. The protein concentration of the ESA was determined using Lowry protein estimation kit (Genei, Bangalore) was found to be 4 mg/mL. Excretory and Secretary antigen was aliquoted and stored at -20°C for further use in the assay.

About 10,000 L3 larvae were collected into 1 mL (100 μL contains 1000 larvae) of cool PBS (pH 7.2), added with 5 mM PMSF, 5 mM EDTA are homogenized in a glass tissue homogenizer followed by sonication at 20 KHz, 1 mA of 5 cycles each for 90 sec duration with four intervals of 2 sec each on ice and repeated after a gap of 15 min. The disintegrated larval contents were extracted at 4°C overnight and centrifuged at 10,000 g for 30 min and the resultant supernatant was collected as the larval antigen and stored at -20°C by adding 5 mM PMSF. The protein concentration of the Larval antigen was determined using Lowry protein estimation kit (Genei, Bangalore) as 0.2 mg/mL and was aliquoted and stored at -20°C for further use in the assay.

E. Lab Animals and Raising of Hyper Immune Serum (HIS)

Figure 3: Photograph Showing the DID Reaction of LA with HIS. c: Control; LA: Larval Antigen; HIS: Respective Hyper Immune Sera 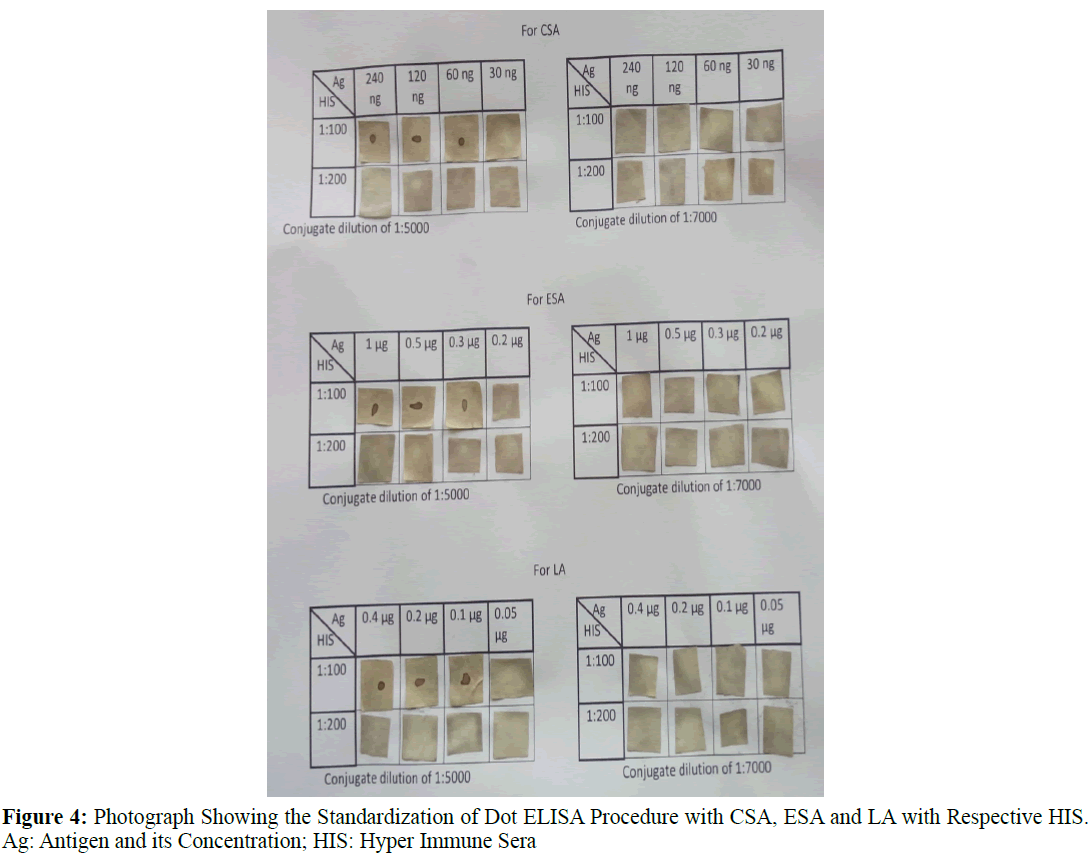 Figure 4: Photograph Showing the Standardization of Dot ELISA Procedure with CSA, ESA and LA with Respective HIS. Ag: Antigen and its Concentration; HIS: Hyper Immune Sera

A. Dot-ELISA for Detection of Anti Oesophagostomum Antibodies in Affected Sheep

The Dot-ELISA was optimized to estimate the concentration of antigen and serum by checkerboard titration. All tests were performed two times to eliminate variations in results if any. Gelatin was used as blocking agent rather than BSA as it was mentioned that blocking with BSA inhibits the action of rabbit anti sheep HRPO conjugate by the manufacture.

A nitrocellulose membrane (BIO-RAD, Germany) of size 1 cm2 was cut, washed in double distilled water, dried and put into a plastic tissue culture plates. Antigen (2 μL) was dotted on to individual strip and air dried for 30 min. The unadsorbed antigen was removed by washing the strips with PBST (sterile PBS (pH 7.2) containing 0.1% Tween-20). The uncoated inactive sites on the strips were blocked with PBST containing 2% gelatin by incubating for 1 hr at 37°C with constant shaking followed by washing the strips for three times in PBST. The strips were incubated in 1:100 dilutions of sera in PBST for 1 hr at room temperature with constant shaking followed by washing for three times in PBST as described earlier to remove unbound antibodies in the sample serum. Rabbit anti-sheep- IgG-HRPO (Jackson immune research, USA) was used as secondary antibody at a dilution of 1:5,000 in PBS (pH 7.2) containing Tween-20 (0.1%) as per the manufactures instructions followed by incubation at room temperature for 1 hr in the dark with constant shaking and subsequent washing as before to remove unbound conjugate. Freshly prepared substrate (3 mg of 3.3' di-amino benzidine (DAB) (SRL, India) in 5 mL of 50 mM tris buffer (pH 7.4), 0.001 g of cobalt chloride and 30 μL of H2O2) solution was added and the strips were dispensed and incubated for 15-20 min at 37°C in dark under constant shaking. The reaction was stopped by washing the strips in double distilled water. The positive reaction was indicated by the development of brown colored spot. When the reaction was complete, the strips were washed in distilled water and allowed to dry. Once dried, the strips were stored in the dark.

B. Performance of Assay

Sensitivity and Specificity of Dot-ELISA

The specificity of laboratory Dot-ELISA was measured by screening 18 sera samples of newly born lambs reared intensively in confined area away from their dams and were found negative for the clinical symptoms of Oesophagostomosis or any other helminthic ova in their feaces. The specificity thus arrived was measured by the formula:

Three sera samples collected from animals positive for Haemonchus contortus (confirmed during post mortem) were used to check the cross reactivity, out of which 2 sera cross reacted to Crude somatic antigen of O. columbianum but not to Excretory and secretary antigen, Larval antigen (Figure 5). 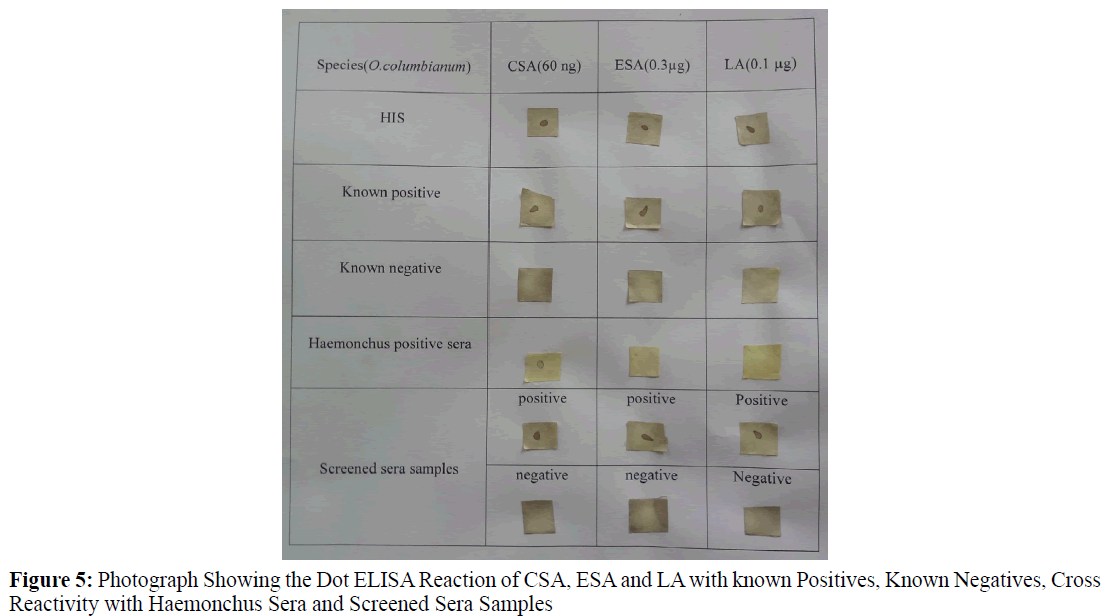 Indirect ELISA tests for the serodiagnosis of human oesophagostomosis and caprine oesophagostomosis which required 5 μg of antigen per well for diagnosis as per (Bashir et al., 2011) but Dot- ELISA needed very low concentration of antigens (less than 5 μg of antigen per strip) i.e., 60 ng of Crude somatic antigen, 0.3 μg of Excretory and secretary antigen and 0.1 μg of Larval antigen was sufficient to diagnose.

Dot-ELISA using Crude somatic antigen gave 6 positive reactions with 18 known negative sera for oesophagostomosis indicating 66.67% specificity, using excretory and secretary antigen gave 5 positive results out of 18 known ovine negative sera indicating 72.22% of specificity, whereas Larval antigen reacted positively with 6 out of 18 known oesophagostomosis negative sera indicating 66.67% B specificity. Specificity of other serological test as indirect ELISA using crude somatic antigen is 21.42% as recorded by (Bashir et al., 2011), 73.9% as recorded by (Jas et al., 2010). The overall specificity of Dot-ELISA was lower than that of indirect ELISA given by Jas which might be due to difference in detection methods of using optical density helping in quantitative evaluation of indirect-ELISA but Dot–ELISA is a qualitative test.

Therefore, it is concluded that, O. columbianum antigens were useful for the serodiagnosis of Ovine Oesophagostomosis by Dot-ELISA. Excretory and secretary antigen was most effective in diagnosis rather than Larvaland Crude somatic antigen. This test helps in mass screening and a huge number of samples can be screened in short duration. Further characterization and purification of these antigens might improve the sensitivity and specificity of the assay. Very low antigen concentration is enough to diagnose Oesophagostomosis by Dot- ELISA (i.e., less than 5 μg of antigen per strip) rather than indirect ELISA.