Aim: Obesity has become an important health problem in developed and developing countries. Nowadays, vitamin D deficiency is very common in obese individuals. Vitamin D deficiency and obesity are associated with cardiovascular disease, metabolic syndrome, type 2 diabetes, and other diseases. In our study, we aimed to investigate the effect of vitamin D deficiency on insulin resistance in obese subjects.

Materials and Methods: A total of 170 individuals, (146 females and 24 males) were included in the study. According to Body Mass Index (BMI), patients were divided into 3 groups. Serum vitamin D was compared with insulin resistance and HbA1c.

Obesity has become an important health problem in developed and developing countries [1]. Chronic binge eating is the most important cause of obesity. However, genetic susceptibility, sedentary lifestyle, and excessive fat storage in the body can also cause obesity. In developed countries, 40% of the population is overweight while 20% of the population is obese. In some countries, 3/4 of the adult population is overweight. In developed countries, this rapid increase in obesity without unchanged genetic background is caused by excessive energy intake and reduced physical activity. Continuous excessive energy intake leads to hypertrophy of adipocytes due to excessive triglyceride storage. In the liver and muscle tissues, impairment of insulin secretion occurs due to the interaction with the insulin signaling cascade and increased apoptosis of pancreatic beta cells, and insulin resistance is induced [2].

We have planned this study in order to show the effect of changes in Vitamin D levels on obesity and insulin resistance.

Amasya University Sabuncuoğlu Şerefeddin Training and Research Hospital database was used and we worked with 170 people (146 women and 24 men) who were enrolled in the clinics between January 1, 2016 and December 31, 2016 and who were treated and followed by dieticians. The patient’s data were examined and they were divided into 3 groups according to Body Mass Index (BMI) values. Serum vitamin D was compared with the insulin resistance and HbA1c. Liver enzymes, blood creatinine, and fasting glucose levels of patients were normal. Exclusion criteria were determined and patients with diabetes, metabolic disease, and deterioration of the liver and kidney function were excluded from the study.

GraphPad Prism version 6.00 was used for statistical analysis (GraphPad Software, La Jolla, California, USA). One-way ANOVA was used to compare quantitative data. Multiple logistic regression analyses were performed to investigate how dependent variables were affected by independent variables. The chi-square test was used to understand gender differences. The results were evaluated in 95% confidence interval and with the p<0.01 significance level. Correlation between the parameters was determined by using Pearson correlation analysis. Correlation coefficient (r) was evaluated as weak when it is between 0.00-0.24, moderate when it is between 0.25-0.49, when it is strong between 0.50-0.74, very strong when it is between 0.75-1.00. 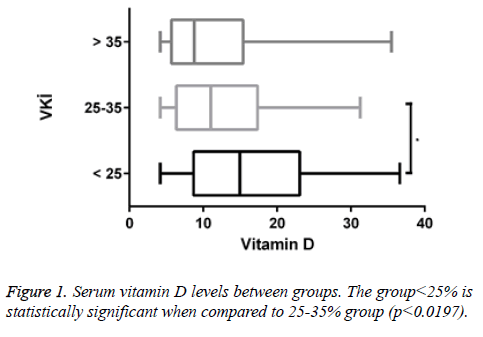 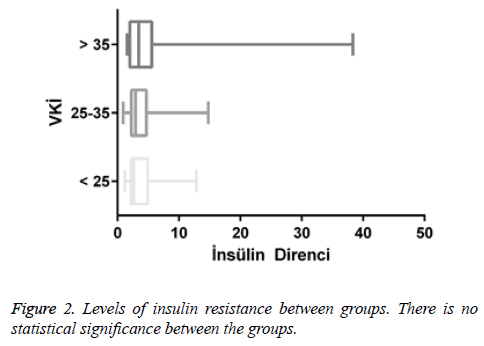 Figure 2: Levels of insulin resistance between groups. There is no statistical significance between the groups.

Table 1 shows gender differences according to the body mass indexes. No statistically significant difference was observed in terms of genders.

Table 1. Gender difference according to the body mass index. 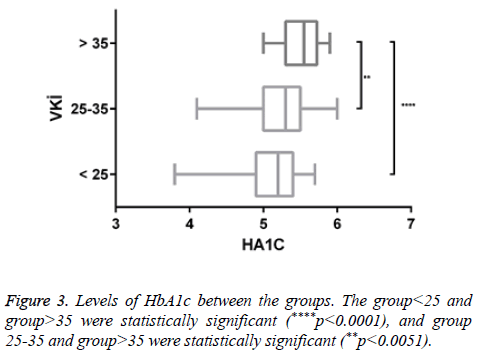 Table 2. Analysis of correlation between parameters.

Table 3. Some statistical values of the groups. 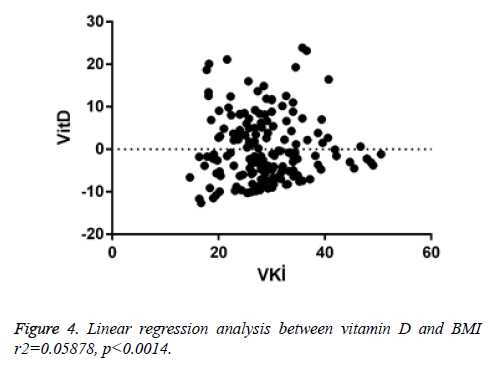 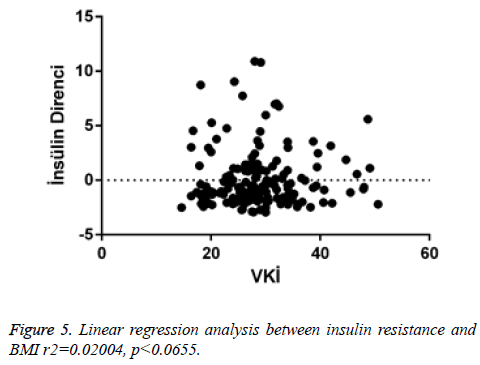 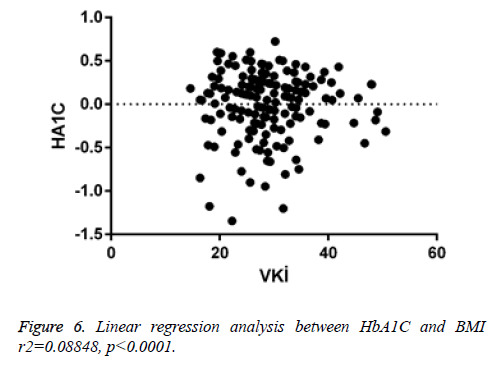 Industrialization and urbanization have caused significant changes that can lead to obesity in people’s lifestyles. The abundance, cheapness, and easy accessibility of food ingredients cause excessive calorie intake. On the other hand, the decrease in physical activity results in less energy expenditure [5]. Obesity is a chronic condition that causes particularly insulin resistance and type 2 diabetes, and liver fat, atherosclerosis, dementia, respiratory diseases, and some types of cancer. Throughout the world, obesity is considered as a reason for the increased frequency of the type 2 diabetes. Approximately 70% of type 2 diabetic patients are obese. Compared to normal people, the rate of the disease is 5 times higher in obese men and 8.3 times more in women [6].

Insulin resistance is biologically impaired in response to exogenous or endogenous insulin. Biological responses to insulin in vivo vary depending on the insulin concentration, the rate of insulin release, and the duration of vitamin D in circulation. The insulin is released from the pancreatic beta cell so that it can exert its biological effect. Vitamin D participates in the systemic circulation via portal tract and it binds to receptors on the cell surface. Then, the insulin enters the cell and initiates the post-receptor process. A disruption that can occur in one or several of these steps results in the abnormal response of the organism against insulin. Thus, insulin resistance is a complex cellular disorder that affects many organ systems and leads to severe metabolic defects [9].

Meta-analyses also confirm the results in the same way. In non-obese diabetic rats, the administration of high dose 1, 25- hydroxy-vitamin D inhibits the onset of diabetes by immunomodulation. This effect is related to the effects of inflammatory cytokines (IL-6 and TNF-alpha) on the beta-cell function. The application of this cytokine leads to hyperglycemia. Chronic administration of 1, 25-hydroxy vitamin D at pharmacological doses reduces the incidence of diabetes in non-obese diabetic rats [11].

Studies have shown that active vitamin D and its analogs inhibit in vivo IL-12 and Th-1 dominance. Again, CD4/CD25 and FoxP3 increase regulatory T cell numbers and thus they can be useful for the diabetes control. It has been reported that Ro-262198, a vitamin D analogue, is effective in the control of type 1 diabetes in adult Non-Obese Diabetic (NOD) mice and improves the course of the disease (100-fold strong immunosuppressive activity and non-hypercalcemic effect from vitamin D). These effects are due to IL-12 suppression, inhibition of infiltration of the pancreas with Th-1 cells, increased T regulatory (Treg cells) cells in the pancreatic lymph nodes, and suppression of immunological process, and thus delaying of the clinical onset of type 1 diabetes in NOD mice. In this process, CD4/CD25 Treg cells were found to be more important than Th2 differentiation. Also, due to the proapoptotic effects of active vitamin D or its analogs, it leads to the delay of the onset of diabetes by providing immunological tolerance through dendritic cells and T cells. It has been shown that the development of type 1 diabetes slows down in prediabetic adult NOD mice administered short-acting active vitamin D or its analogue [12].

In the development of type 2 diabetes, vitamin D and calcium have been reported to be effective at varying rates in the development of these processes. The effect of vitamin D on healing of beta cell function can be directly or indirectly influenced. One of the most important proofs of direct effect is the expression of the DVR gene and 1-alpha hydroxylase gene in beta cells. Vitamin D has been reported to increase insulin secretion in response to glucose stimulation but not basal insulinemia. Disruption in response to insulin secretion has been shown in DVR knock-out mice. Human insulin promoter gene contains DVR, with the effect of active vitamin D human insulin gene gain transcriptional activity. In case of missing DVR insulin secretion which is induced by glucose is inhibited. Improvement of the insulin secretion due to the vitamin D supplementation is considered to be a direct effect of vitamin D on the improvement of beta-cell function [15].

In insulin resistance, and type 2 diabetes, vitamin D is thought to be involved in impaired pancreatic beta-cell function with various mechanisms [8].

Studies have shown that elevated serum vitamin D concentration reduces insulin resistance and type 2 diabetes risk [17]. Another study has shown a positive correlation between insulin sensitivity and vitamin D concentration. Vitamin D deficiency has a negative effect on beta cell function. People with hypovitaminosis D are thought to be at risk for insulin resistance and the metabolic syndrome [18].

In addition, a 47% increase in insulin resistance can be explained by the relationship between high BMI and vitamin D deficiency [19]. Differences in insulin sensitivity and metabolic parameters were examined according to vitamin D levels in pre-diabetic elderly. There was a statistically significant negative correlation between plasma vitamin D levels and HOMA-IR and insulin levels in all cases. Insulin sensitivity is thought to be reduced in pre-diabetic elderly patients with vitamin D deficiency [20]. Despite its overstorage in body fat compartments, obesity synergistically interacts with vitamin D because of its reduced bioavailability. Insulin resistance and increased risk for type 2 diabetes are considered [21].

Vitamin D is thought to reduce insulin resistance which is induced by free fatty acids in muscle cells [23]. It was observed that there was a relationship between insulin sensitivity and vitamin D. In NHANES III study, it was reported that the incidence of metabolic syndrome due to possible insulin resistance in males and females with low vitamin D levels may increase and it can be caused by abnormal obesity [24]. In non-diabetic patients, initial vitamin D levels have been shown to be inversely proportional to glucose levels, insulin resistance, and risk of a 10 y metabolic syndrome independent of risk factors [25].

Vitamin D deficiency in obese adolescents can cause adverse effects on insulin resistance and glucose homeostasis. Vitamin D deficiency is associated with the risk of obesity, type 2 diabetes, and metabolic syndrome. The biological mechanisms of vitamin D in obesity and glycemic control have not yet been not well understood. It is thought vitamin D insufficiency leads disorder of insulin secretion, hepatic/periferic glucose intake, and inflammation. Most of the studies conducted to date show a significant relationship between circulating vitamin D concentrations and insulin sensitivity/resistance indices. In some clinical trials in which patients received vitamin D treatment, beneficial effects of vitamin D on insulin resistance and impaired glucose tolerance were observed in obese adolescents [27].

According to a study in which 320 healthy women aged 40-52 y were examined, the prevalence of vitamin D deficiency was found to be very high. Low vitamin D levels are associated with high body fat, high blood glucose, and decreased insulin sensitivity. Thus, vitamin D deficiency is a potential risk factor for the development of obesity and insulin resistance [30]. A study was conducted with 31 female patients who had BMI values more than 25-35. According to results, there was a negative correlation between low vitamin D levels, insulin, and HOMA index levels [31]. A study conducted with 1772 individuals (over 50 y old) showed that low serum concentrations of vitamin D were significantly associated with being overweight and obese [32].

In our study, serum vitamin D level decreased statistically due to increased BMI. This suggests that obese individuals may be at risk for vitamin D deficiency. It is thought that this deficiency may be due to imbalance in feeding, insufficient movement due to obesity, and not enough taking advantage of the sunlight.

There was a statistically significant increase in HbA1c levels due to increased BMI. This increase may be due to diabetic susceptibility in individuals with obesity-related increased insulin resistance.

Our study was done retrospectively and we think that there are some limitations. Patient records did not reveal information about the amount of vitamin D taken on the diet, which could affect patient’s serum vitamin D levels, and how long they have benefited from sunlight. There was no information about the lifestyles and daily physical activities of the patients. Another important issue is whether vitamin D deficiency contributes to the development of obesity, or whether vitamin D levels have reduced due to obesity-related eating habits. For clarification of these issues, there is a need for more detailed studies in which more patients with more information are examined.