Seaweeds were collected from substations along Sheva creek, Peerwadi coast and Dharamtar creek of Uran (Raigad), Navi Mumbai, west coast of India. Seaweeds attached to the boulders, jetties, rocks on the shores, stones, pebbles, fishing nets and pneumatophores of mangrove were collected monthly from June 2013 to May 2015. A total of 19 species of seaweeds representing 16 genera, 15 families and 13 orders were identified from Uran coast. Of these, 7 species belongs each to Chlorophyta and Rhodophyta, 2 each to Cyanobacteria and Ochrophyta and 1 to Charophyta. At all study sites, maximum species diversity was recorded during pre-monsoon and post-monsoon than monsoon. Diverse species composition of seaweeds is recorded at Peerwadi coast than the Sheva creek and Dharamtar creek. Lower species diversity at Sheva creek and Dharamtar creek is attributed to the non-availability of rocky substratum for settlement and maritime activities of Jawaharlal Nehru Port Trust (JNPT). The study shows that seaweeds from Uran coast are under stress due to industrial pollution and Port operations.

‘Seaweeds’ are the multicellular macroalgae with complex differentiated thallus (Subba Rao & Mantri, 2006). They are subdivided into four different groups: brown algae (Phaeophyta), red algae (Rhodophyta), green algae (Chlorophyta), and blue-green algae (Cyanophyta) (MacArtain et al., 2007). They constitute one of the important living resources of the ocean and were found attached to the bottom on solid substrates such as rocks, dead corals, pebbles, shells and plants (Sahayaraj et al., 2014).

Seaweeds are primary producers and play a central role in coastal habitats (Harley et al., 2012). They support the coastal and marine biodiversity (Christie et al., 2009) and are the base of food chain in the oceans (Figueiredo & Creed, 2009; Barot et al., 2015). Seaweeds are the providers of ecosystem goods and services like food, medicine and storm protection (Ronnback et al., 2007).

A biodegradable polysaccharide extracted from seaweeds Gracilaria dura, Gelidiella acerosa and Kappaphyucus alvarezi is used for preparation of biodegradable ropes to replace synthetic ropes used in seaweed harvest and other applications. It can also replace plastic in other forms like packing material, cloths drying rope, bag handles and other home décor items (Herlekar, 2015). Furthermore, products like biodiesel, bioethanol, biobutanol and hydrogen gases were synthesized from algae (Pooja, 2014).

Seaweeds are a source of novel bioactive compounds, such as phlorotannins and certain polysaccharides, that may confer certain health-promoting properties and consumption of seaweeds has been linked to a lower incidence of chronic diseases such as cancer, hyperlipidemia, and coronary heart disease (CHD) (Brown et al., 2014). Biological importance of seaweeds as food, medicines, therapeutics, fodder, fertilizer and manure is also documented by Burtin (2003), Dhargalkar and Pereira (2005), Kandale et al., (2011), Gupta (2012), Raja et al. (2013) and Krishnamurty et al., (2015).

Seaweeds are particularly useful organisms for studying diversity patterns and planning the conservation and sustainable use of inshore marine resources, and are also useful as indicators of climatic change (Van der Strate et al., 2002). Distribution and abundance of seaweeds is affected by local environmental productivity and degree of exposure to disturbances like high temperatures, desiccation stress, herbivores and competition with coastal fauna and flora (Figueiredo & Creed, 2009). The impacts of ongoing anthropogenic climate change in seaweed dominated ecosystems remain poorly understood (Harley et al., 2012).

In India, many of the rocky beaches, mudflats, estuaries, coral reefs and lagoons along the coast provide ideal habitats for the growth of seaweeds. In all, 271 genera and 1153 species of seaweeds have been enumerated till date from the Indian waters (Subba Rao and Mantri, 2006). Maritime activities of Jawaharlal Nehru Port Trust (JNPT, an international port) and other establishments affect the ecology of seaweeds from Uran coast, Navi Mumbai (Pawar, 2013). 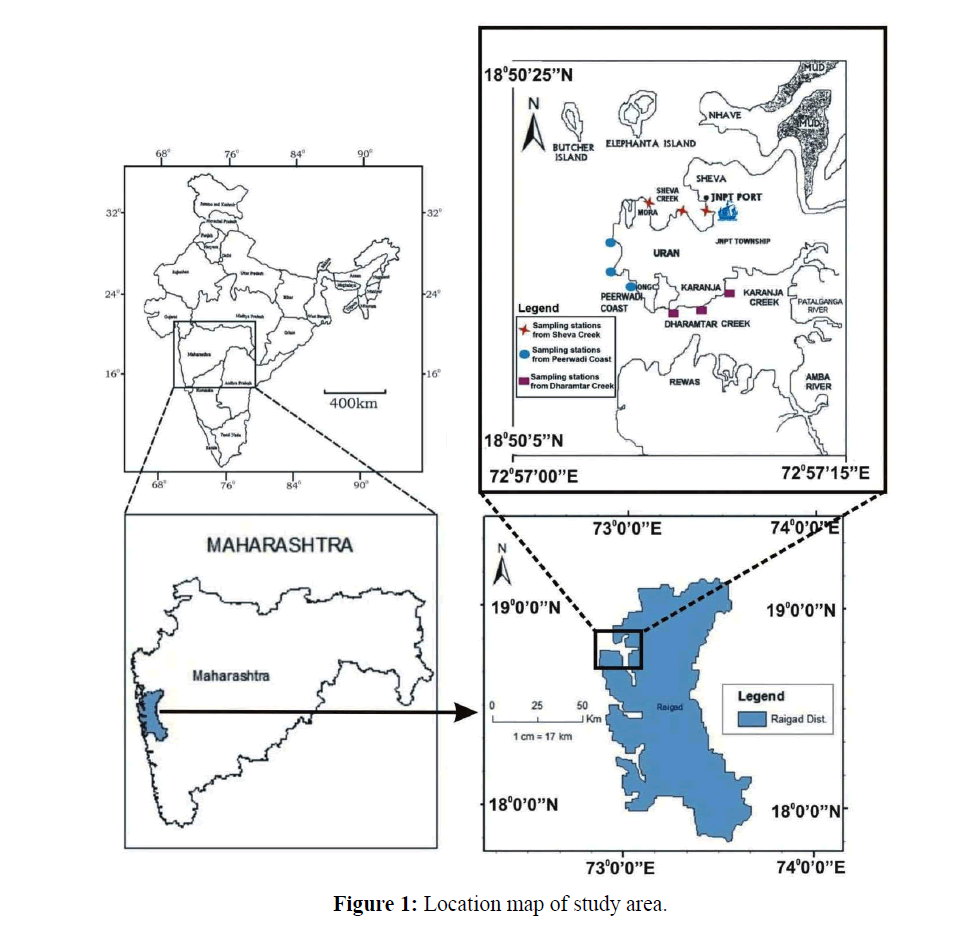 The study sites were visited monthly during spring low tides from June 2013 to May 2015 and seaweed samples were collected from the intertidal region. As per seaweed collection procedures documented by Rath and Adhikary (2006), seaweeds attached to the boulders, jetties, rocks on the shores, stones, pebbles, fishing nets and pneumatophores of mangrove were collected by scrapping and preserved in 4% formaldehyde-seawater solution. Microphotographs of the seaweeds were taken with Cannon EOS1100D digital camera and samples were identified following the standard taxonomic keys of Kaliaperumal et al. (1995), Dhargalkar & Kavlekar (2004), Krieg (2005), Bhavanath Jha et al. (2009), Edwards et al. (2012) and Manisseri et al. (2012). 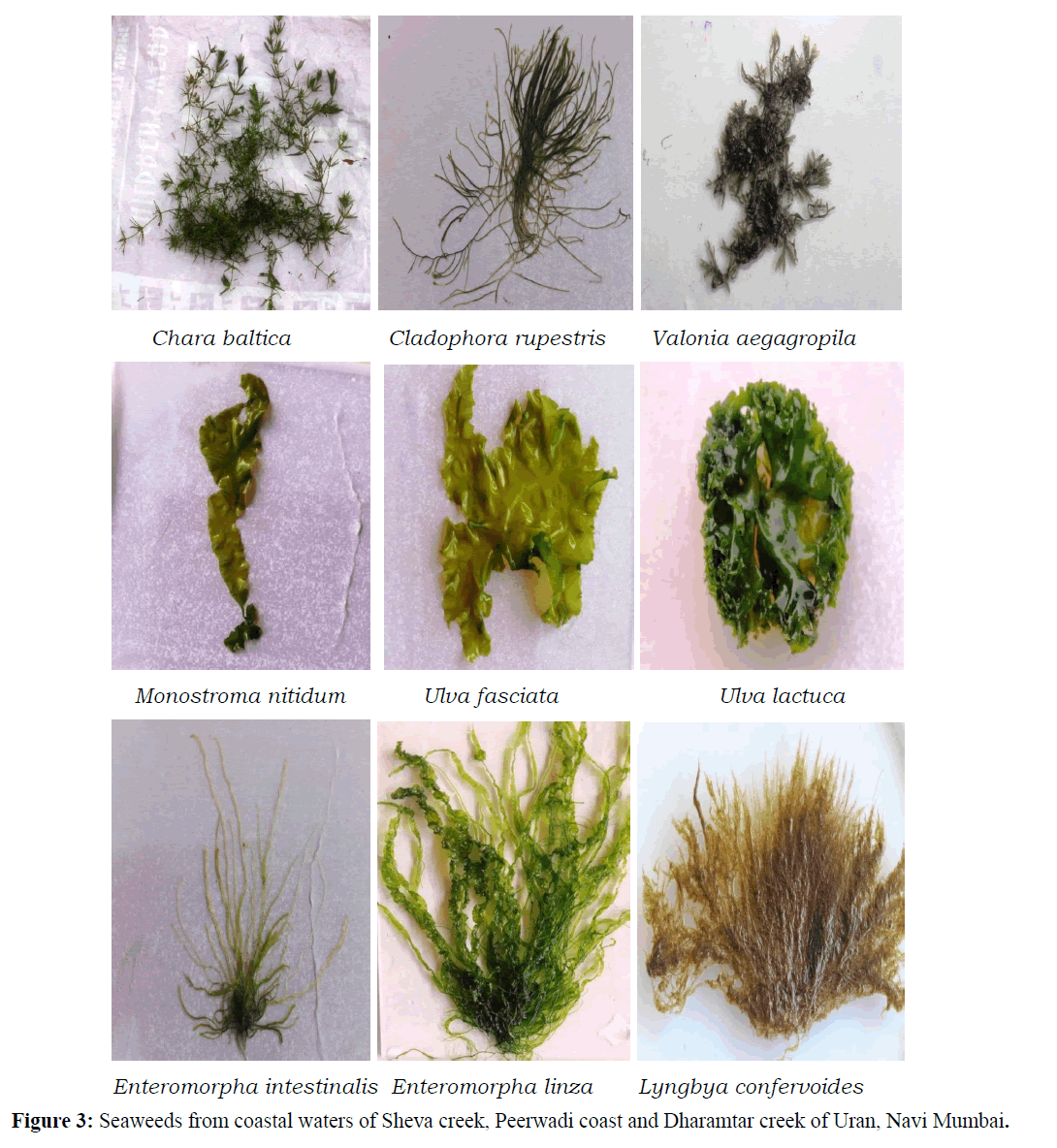 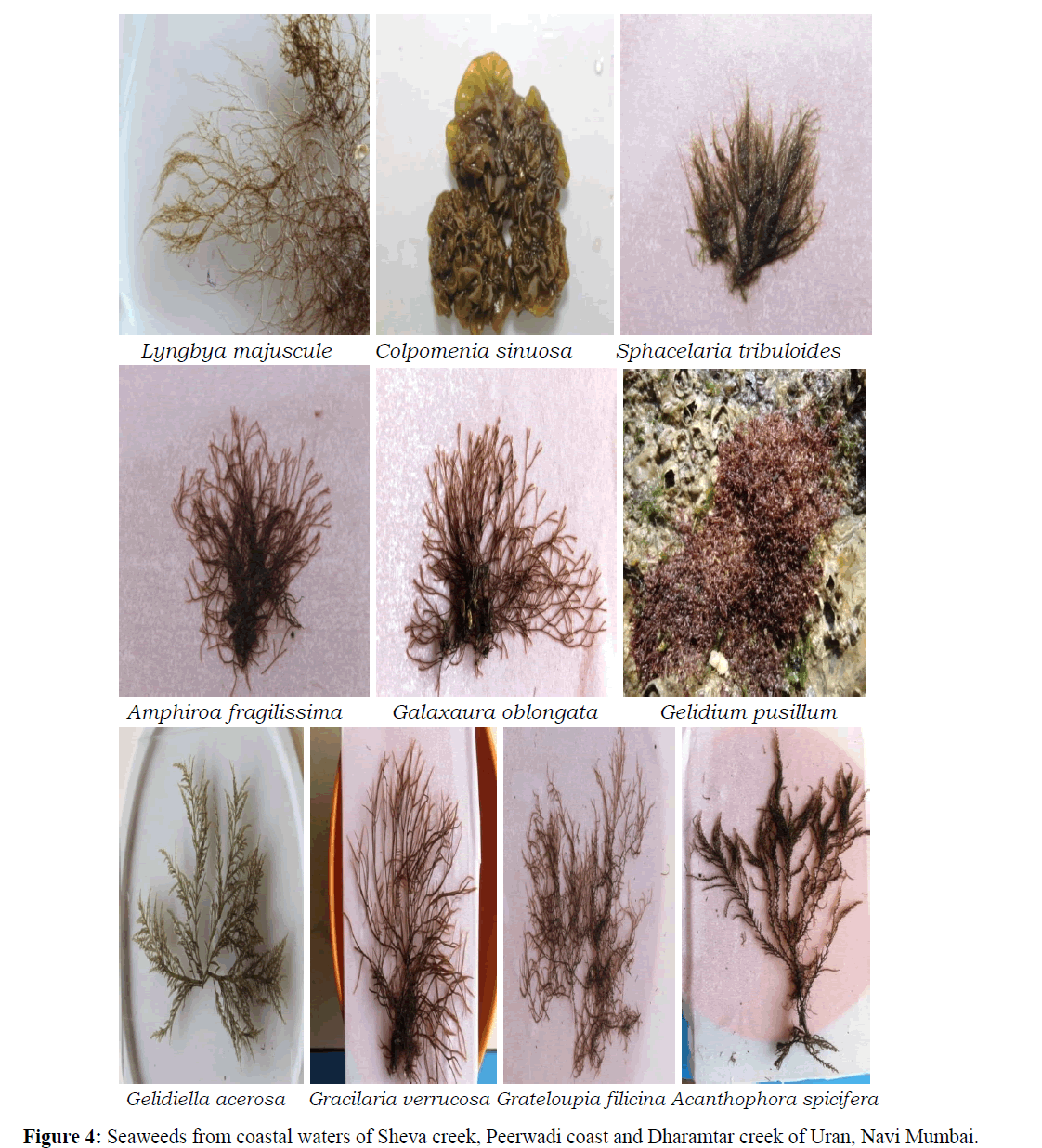 At Uran coast, maximum species diversity of seaweeds was recorded during pre-monsoon and post-monsoon than monsoon periods. Higher species composition of seaweeds was also noted during post-monsoon than premonsoon and monsoon. Maximum diversity of seaweeds recorded during pre-monsoon and post-monsoon is attributed to favorable environmental conditions with respect to variables like temperature, salinity, dissolved oxygen and nutrients (Table 2). Results of the study are in agreement with earlier reports of Rao et al. (2011) in the Bhimili coast, east coast of India, Reddy et al. (2014) in seaweed resources of India, Pariera and Almeida (2014) from Goa coast, Naik et al. (2015) in Karwar Bay, and Rodde and Sable (2015) from Malvan and Kunakeshwar in Sindhudurg District of Maharashtra.

During present study, diverse species composition of seaweeds was recorded at Peerwadi coast than Sheva creek and Dharamtar creek. This is correlated with the presence of rocky upper littoral zone which provide suitable substratum and appropriate habitat for seaweeds. Also at site II, comparatively less number of Container Freight Stations and other port related establishments are present (Pawar, 2015). Similar results were reported by Barot et al. (2015) at Okha coast, western India.

At Sheva creek has extensive mudflats with little rocky substratum. Jawaharlal Nehru Port Trust (JNPT) and other establishments are located in the stretch of Sheva creek. Also, Gharapuri Island (Elephanta caves) is present on the north side of the creek. The creek receives wastes and effluents from Asia’s largest industrialized zone namely Thane Belapur industrialized area along with the Navi Mumbai Urban area. Maritime activities of JNPT and nonavailability of rocky and coral substratum might be related to minimum density of seaweeds at Sheva creek (Pawar, 2013). Similar results on species diversity of seaweeds were reported by Rath and Adhikary (2006) in Orissa, east coast of India and Satheesh and Wesley (2012) in the Kudankulam coastal waters, south-eastern coast of India.

Dharamtar creek is the confluence of Karanja creek, Patalganga River and Amba River. Intertidal region of Dharamtar creek is with rocky and coral substratum towards the Dronagiri Mountain and remaining part of the creek is dominated by the marshy areas and mud flats. The rocky substratum of Dharamtar creek supports moderate species diversity of seaweeds. This is attributed to the substantial amount of waste water received from petrochemical complex and other industries that opens into Dharamtar creek (Pawar and Kulkarni, 2007).

At Uran coast, species composition of Chlorophyta and Rhodophyta has dominated the Cyanobacteria, Ochrophyta and Charophyta. This is correlated with the topography of the coast which is made up primarily of rocks of green basalt, which are glossy black above and covered by calcareous surfaces. Results of the study are in agreement with earlier reports of Kerswell (2006), Domettila et al. (2013), Karthick et al. (2013), Reddy et al. (2014), Sahayraj et al. (2014) and Valanja and Jamdhade (2014).

Seaweeds are known to be vulnerable to physical and chemical changes in the marine environment (Harley et al. 2012). Sahoo et al. (2003) reported that large-scale aquacultural activities in Chilika Lake, Orissa have resulted in eutrophication which has changed its floristic composition. Satheesh and Wesley (2012) noted that seaweeds are under threat in developing countries, where they are being disturbed by a variety of human activities. Gradual disappearance of marine algae along Visakhapatnam coast by disturbances created by discharge of effluents, environmental factors, tidal waves and cyclones is reported by Krishnamurty et al. (2015).

JNPT and Container Freight Stations (CFS) have affected the mangrove biodiversity and incidences of coastal pollution occur because of leakage/discharge of transporting materials along with industrial effluents (Pawar and Kulkarni, 2007; Pawar, 2013). Since no earlier reports are available on taxonomy and species diversity of seaweeds from Uran coast, data presented here can be taken as a baseline data in knowing the status of seaweeds from Uran coast and effect of industrial development on it and for a better management of marine algae.