Discussion on the clinical efficacy of blood purification in children with acute and chronic renal failure and its effect on serum levels of TNF-? and TGF-?

Purpose: To discuss the clinical efficacy and safety of blood purification therapies (BPT) in children with acute and chronic renal failure and its effect on serum levels of TNF-α and TGF-β1

Conclusion: Blood purification for treatment of children with renal failure was safe and effective, The scavenging effects of BPT on serum creatinine, urea nitrogen, uric acid, TNF-α and TGF-β 1 were obvious.

With the advances in medical technology, the diagnosis and treatment of many diseases had made great progress, but the incidence of renal failure (IRF) in children remained high. IRF in children with severe acute diseases achieved 5-20% [6]. In the past 30 years, although life support technologies and treatments had greatly improved, but the mortality rate of children with renal failure was still more than 50% [7]. With the advent of BPT, this kind of mortality dropped significantly. As reported in many Papers, BPT had reduced the mortality of children with IRF to 3%~37%; BPT were maturing into the most common kidney disease replacement therapies in recent years, as they had a profound impact. Currently BPT applied for patients with renal failure included hemodialysis and hemofiltration. Hemodialysis was used mainly for the clearance of small and medium-sized molecules, while hemofiltration was targeted for the small and larger molecules [8]. The scavenging effects of BPT on serum creatinine, urea nitrogen and uric acid had been recognized in many clinical studies. However, Children had lighter weight, smaller blood volumes and the causes of renal failure were complex, so its clinical application in children was difference from adults, the choice of BPT and hypotension during dialysis were problems appeared frequently [9].

Related studies showed that persistent inflammation in renal failure mediated renal injury and had an important role in chronic fibrosis [10]. Accordingly, whether blood purification in patients with renal failure produced a therapeutic effect by interfering with the inflammatory reaction was a key clinical problem many scholars concern. To learn more about the clinical efficacy and safety of BPT in children with renal failure and its effect on the inhibition of inflammationLevels of TNF-α and TGF-β1 before and after blood purification was observed to explore part of the anti-inflammatory mechanism, we also observed clinical cases, the blood gas analysis and the changes of blood biochemical markers, as stated below.

There were two types of blood purification therapies, namely hemodialysis and hemofiltration. Hemodialysis was performed with Gambro AK95S Dialysis Machine, whose filter is Fresenius hollow fiber dialyser and hemofiltration was done by GAMBRO prismaflex Dialysis Machine, which has a M100 e filter and supporting pipes. Both machines adopted bicarbonate as dialysate and used temporary vascular access. Continuous venovenous hemofiltration is realized by using No.16 needle to puncture the femoral vein or jugular vein. Meanwhile we use heparin to prevent blood clotting and the first-dose for hemodialysis and hemofiltration was 0.3~0.5 mg/kg and 0.5~1 mg/kg respectively, maintaining 1~3 mg/kg/h and 3~5 mg/kg/h correspondingly. The volume of the circulation for hemodialysis was 8~27 L, the blood flow rate (60~150 ml/ min), ultrafiltration (0~2700 ml), dialysis time (2~2.5 h), interval (1~2 days); As for hemofiltration, it was 6~42 L, 15~100 ml/min, 0~3900 ml, 6~8 h and 1~2 days respectively.

Detection method of TNF-α and TGF-β1

The Sandwich ELISA, whose ELISA kit was provided by the Beijing 4A Biotech Co., Ltd, and its operation was in strict accordance with the company’s standards.

Changes in vital signs before and after BPT

After BPT, Both ARF group and CRF group showed a significant decrease in blood pressure, the difference was statistically significant (P<0.05) compared with those before BPT. Other vital signs were stable (Table 1).

Table 1. Changes in vital signs before and after BPT(x ± s).

Changes in kidney functions before and after BPT

After BPT, both ARF and CRF group showed an obvious decrease in the levels of blood pressure, serum creatinine, urea nitrogen and uric acid. The differences were statistically significant (P<0.05). Kidney function was greatly improved (Table 2 and Figures 1 and 2).

Table 2. Changes in kidney functions before and after BPT (x ± s). 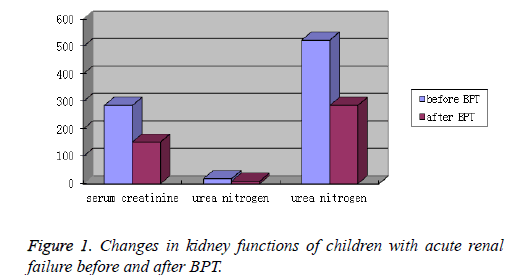 Figure 1: Changes in kidney functions of children with acute renal failure before and after BPT. 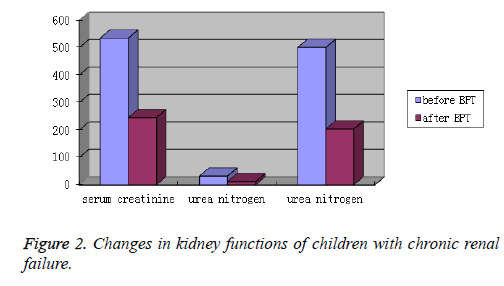 Changes in major electrolytes before and after BPT

Table 3. Changes in major electrolytes before and after BPT (x ± s).

Changes in Blood routine examination before and after BPT

Table 4. Changes in Blood routine examination before and after BPT (x ± s).

Changes in TNF-α and TGF-β1 before and after BPT

After BPT, both ARF and CRF group showed a obvious decrease in serum levels of TNF-α and TGF-β1, the differences were statistically significant (P<0.05) (Table 5).

Table 5. Changes in TNF-α and TGF-β1 before and after BPT.

Blood purification technologies, currently including hemodialysis, hemofiltration, hemoperfusion, plasmapheresis and their derived technologies, has been widely used in pediatrics, However, Children had lighter weight, smaller blood volumes, and limited ability to regulate themselves, so the efficacy and safety of BPT on them are still worth exploring [11,12]. In BPT, different diseases use different techniques, Hemodialysis and hemofiltration were mainly used for renal dysfunction, accumulation of metabolic products and excess load. The main indications of applications included: 1 acute renal failure; 2 chronic renal failure; 3 acute pulmonary edema; 4 imbalances of acid-base balance and electrolyte 5 partly poisoning; 6 acute congestive heart failure; 7. intractable edema. And age and weight requirements for blood purification technologies were different, generally speaking, For children who were older than 2 years and weighed more than 20 kg, the preferred choice was hemodialysis; As for children weighing 20 kg or less, and the main purpose of the treatment was ultrafiltration, hemofiltration was a priority [13].

Renal failure was not an independent disease, mostly resulted from the gradual development of kidney diseases which led to decreased glomerular filtration rate [14]. When the kidneys cannot be compensated themselves, renal failure occurred. The pathogenesis of renal failure included pre-renal, post-renal and intrinsic renal. The prognosis for kidney failure depends upon the cause. In this trial, the primary disease of ARF group was mainly chronic glomerulonephritis, nephrotic syndrome and interstitial nephritis [15]. If not combined with other critically ill, ARF group had a better prognosis after BPT, some children can be completely back to normal, but if their symptoms were considered as emergency medical conditions and left untreated, it could be life-threatening, even developed into CRF [16]. The primary disease of CRF patients were mainly chronic glomerulonephritis, polycystic kidney disease. These diseases mostly resulted from the progression of chronic kidney disease, could result in irreversible loss of kidney nephrons and functions, and had relatively poor long-term prognosis. Take this trial alone, the effect was obvious, but required long-term maintenance dialysis, and long-term complications, such as anemia, growth retardation were likely to occur.

The adequacy of blood purification could be embodied by a decline in the level of urea nitrogen (UUR), with UUR>65% usually indicated good purifying effect. In this trial ARF group (48.32%) and CRF group (58.65%) failed to meet the requirements [17]. The reason may be that children had less blood volume and were subject to hemodynamic disorders. The premise of increased dialysis adequacy must ensure patients tolerate and be hemodynamically stable, otherwise the patients were prone to complications associated with blood purification. The main complications of blood purification were disequilibrium syndrome, low blood pressure, low body temperature, filter clotting, bleeding, infection, pseudoaneurysm and the like. When the children experienced lower blood volume and excessive ultrafiltration, there will be complications such as hypotension. A child's blood volume was originally low and prone to complications, so for children received blood purification, doctors need to use capacitycontrolled dialysis machines and small surface area dialyzers to avoid accidents. In the course of dialysis health care workers should pay close attention to whether there is tendency for hemorrhage or potentially bleeding. Under the premise of no abnormal blood clotting in dialysis machines and no abnormal bleeding in patients, health care workers should minimize the amount of heparin. Therefore, the safety of children's blood purification was more important than the dialysis adequacy. This study showed that the blood purification technology we take was more secure and reliable for children.

TNF-α was a typical pro-inflammatory cytokine, mainly emerged in the early state of inflammatory response, and was closely related with the inflammatory cascade. In a variety of ischemia-reperfusion injury and immune-related kidney disease, TNF-α was considered to be an important factor leading to kidney damage [18]. The secretion of TNF-α can serve as a good indicator of the extent of acute phase inflammatory response. TNF-α was a pleiotropic cytokine produced chiefly by activated macrophages, played a proinflammatory role. It was named after it can induce the hemorrhagic necrosis of tumor cells in mice. In the kidney, TNF-α is mainly secreted by activated macrophages, but may also be produced by many other cell types [19]. TNF-α is generally undetectable in health kidneys; however, when the majority of renal cells were stimulated, they can secrete TNF- α. TNF-α had connection with a variety of renal inflammations. In patients with renal failure, serum levels of TNF-α were significantly increased. TNF-α worked on renal parenchyma through tumor necrosis factor receptor 1 (TNFR1), causing inflammation of glomerular and even renal insufficiency (Levels of TNF-α rise in serums and urine). In patients suffering from glomerular disease and proteinuria, the level of TNF-α secreted from stromal fibroblasts had a relationship with the degree of renal fibrosis. Therefore, TNF-α inhibitors can reduce inflammation. Currently, the use of suppression or inhibition treatment against TNF-α had already achieved a certain effect in clinical practice. Since TNF-α can be absorbed by biofilm, it may be able to clear the TNF-α by blood purification to reduce inflammatory Injury and promote recovery. TGF-β1 was a multifunctional cytokine, performed many cellular functions, including the control of cell growth cell proliferation, cell differentiation and apoptosis. In kidney disease, it induced the accumulation of extracellular matrix, promoting the formation of galotinous in fibroblasts, had a close relationship with chronic renal disease and renal fibrosis, it was a sign of chronic renal disease. TGF-β1 was also a pleiotropic cytokine, The TGF-β1 superfamily of ligands had a key role in embryonic development, homeostasis and tissue repair. Abnormalities of the signal peptide of TGF-β1 were associated with a variety of diseases, including cancer, fibrosis and autoimmune diseases. TGF-β1 promoted fibrosis through promoting the formation of collagen in fibroblasts. Previous studies have shown that TGF-β1 plays an important role in the fibrosis of renal disease [20]. Blocking signaling pathway of TGF-β1 can prevent renal fibrosis. The application of antiserum TGF-β1improved the accumulated of extracellular matrix. The increase of TGF-β1 and its receptor was a sign of chronic renal disease [21]. In this trial, both ARF and CRF group showed a obvious decrease in serum levels of TNF-α and TGF-β1 after BPT, indicating that blood purification can reduce the amount of TGF-β1 in circulation, just as evident in other studies. It also showed TNF-α can mediate inflammatory leading to renal damage while blood purification had antiinflammatory effects, thus blocking the progression of fibrosis and dying of epithelial cells.

In summary, BPT could rapidly improve the clinical symptoms of children with acute and chronic renal failure, such as hematuria, proteinuria, edema and hypertension. It showed stable therapeutic effect, less complications, which was safe and effective. The scavenging effects of BPT on serum creatinine, urea nitrogen, uric acid, TNF-α and TGF-β1 were obvious, some patients partially returned to normal. We therefore believe that blood purification had a significant clinical effect for children with renal failure, it had no effect on vital signs, can effectively reduce the mortality rate of children and serum levels of TNF-α/TGF-β1 in circulation. It can alleviate the acute-phase inflammation and reduce the side effects of renal repair, may have a beneficial effect on the course of chronic renal disease and promote the recovery of renal function, therefor it was a safe and effective treatment for children with renal failure and should be promoted in clinical practice.