The study aimed to evaluate the efficiency of direct and indirect organogenesis for large-scale multiplication, propagation and conservation of Abutilon ranadei, an endemic and critically endangered plant. Nodes and leaves from in vitro germinated seedlings were used as source of explants for direct and indirect shoot organogenesis respectively. High frequency shoot organogenesis (77.5%) with 7.1 ± 0.2 shoots were achieved when nodes were cultured on MS medium with BAP (3.0 mg/l) and GA (0.5 mg/l). The best callus induction and proliferation response was achieved with 2,4-D (2.0 mg/l) and BAP (1.5 mg/l). Maximum response (92.5%) for shoot regeneration from callus with 13 ± 0.8 number of shoots were obtained in MS medium fortified with KN (1.5 mg/l) and NAA (0.4 mg/l). Microshoots regenerated via direct as well as indirect organogenesis were rooted best in ½MS containing 1.5 mg/l IBA and 1.0 mg/l BAP. The well rooted plantlets were successfully established in the soil.

The genus Abutilon (family - Malvaceae) is one of the pharmaceutically important groups of the flowering plants. These plants are used for making ropes cordages, jute dyes, drugs, gum, wrapping cloths, tissue paper for making coarse cloth etc. [1,2]. A. ranadei is endemic and critically endangered shrub known from few localities in the Northern Western Ghats of India [3]. It is the wild relative of the plants of the agricultural importance e.g. Abelemoscus, Gossipium etc. The key feature of this species is bell shaped corolla with pale purple petals and orange yellow tips which has ornamental value. Poor seed setting, seed germination and seed viability are the certain constrains in its survival in nature [3]. Therefore there is an urgent need for large-scale multiplication and restoration of natural populations of these species using biotechnological tools. In the present investigation, efficient protocols were developed for direct and indirect shoot organogenesis, large-scale multiplication, and subsequent plantlet regeneration for conservation of A. ranadei.

Seeds of A. ranadei were collected from Amba Ghat locality from the Northern Western Ghats. Healthy and dry seeds were washed in running tap water for 5 minutes and were rinsed with Tween-20 (0.5% v/v) for 10 min followed by washing with sterile distilled water. Surface sterilization of the seeds were done using freshly prepared 0.1% HgCl2 solution for 4 min followed by three time washing with sterilized distilled water. The seeds were blotted on sterile filter paper and were transferred to Murashige and Skoog’s Medium [4]. All the cultures were maintained at 25 ± 2°C with continuous illumination of 2000 Lux light by white cool fluorescence light. (Philips, India).

Seed germination and establishment of cultures

The nodes were inoculated in MS media with different concentrations and combinations of plant growth regulators (BAP, TDZ and GA) for direct shoot regeneration. However, leaf derived calli were transferred on MS medium supplemented with BAP, KN and NAA. Shoots derived via direct and indirect organogenesis were transferred to halfstrength MS medium containing different concentrations and combinations of IBA and BAP. Well rooted plantlets were transferred in the plastic pots containing the coco peat, soil and sand (1:1:1) for their ex vitro establishment. The roots were treated with Fungicide (Bavistin, 05%, w/v) before transfer to the pots.

All the experiments were conducted in completely randomized design and were repeated twice with 30 replicates per treatment. Analyses of comparisons of means were performed using the Dunnett multiple comparison test.

Seeds were forming roots within a week after inoculation on half as well as full strength MS medium. However, the development of seedlings to complete plantlets was recorded highest in half strength MS medium Figure 1A. 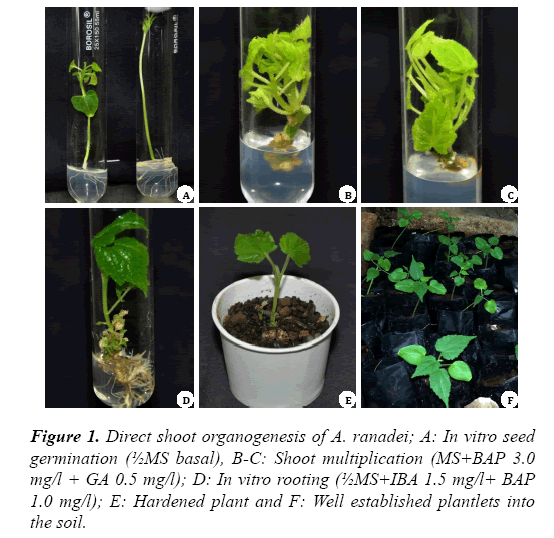 Nodes and leaves from the in vitro germinated seedlings were used for the shoot multiplication and callus induction experiments respectively. The high multiplication rate (77.5%) and shoot number (7.1 ± 0.2) were recorded in MS medium supplemented with BAP (3.0 mg/l) and GA (0.5 mg/l) (Figure 1B-1F).

The morphogenic response of nodal explants cultured on MS medium with different plant growth regulators are presented in Table 1.

In A. ranadei, callus formation varied significantly depending on the type and concentration of the plant growth regulators (Table 2).

The cut ends of the leaves showed the earliest sign of callus formation within 2 weeks of culture. The leaf discs cultured on PGR free MS medium failed to induce the callus. Callus induced on the 2,4-D supplemented medium showed brownish appearance (Figure 2A). 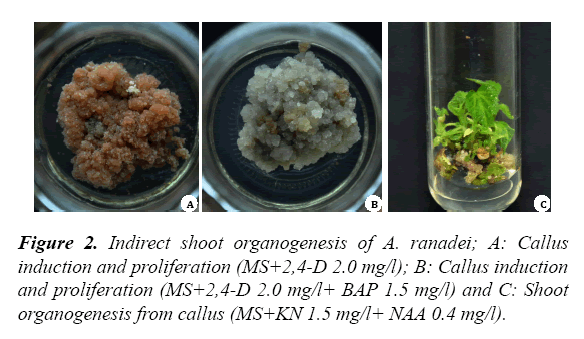 Optimum shoot formation (92.5%) with 13.1 ± 0.8 number of shoots was achieved on MS medium supplemented with KN (1.5 mg/l) in combination with NAA (0.4 mg/l) (Figure 2C). These findings are in accordance with the previous report on A. indicum where combination of KN and NAA proved superior for induction of shoots from leaf derived callus [6]. The in vitro rooting responses in microshoots of A. ranadei are presented in Table 4. The highest rooting frequency (85%) was achieved when in vitro regenerated shoots were transferred to ½MS medium supplemented with IBA (1.5 mg/l) with BAP (1.0 mg/l) (Table 4 and Figure 1D). However, singular supplementation of auxin was necessary for some the medicinal and horticultural plants [7]. The well rooted plantlets were successfully transferred to the soil with 82% of survival rate and with no sign of morphological differences (Figure 1EF).

In conclusion, an efficient direct and indirect shoot organogenesis protocols were developed for large-scale multiplication, propagation and conservation of A. ranadei. This is the first report on in vitro propagation of this critically endangered plant. This protocol will be helpful for conservation of other Abutilon spp. as well as medicinally important species.

Authors are grateful to Head, Department of Botany and Principal, Yashavantrao Chavan Institute of Science, Satara for providing necessary laboratory facilities and for encouragement. We also sincerely thank to Research Advisory Committee of the institute for financial assistance. We indebted to Dr. Sharad Kambale, Department of Botany, Shivaji University, Kolhapur for helping with the plant collection and its authentication.