Papillary Thyroid Microcarcinoma (PTMC) is a type of Papillary Thyroid Carcinoma (PTC), the tumor diameter of which is less than 1 cm. In the recent years, the incidence of PTC has increased gradually, especially for PTMC [1]. It is not difficult to diagnosis of PTC in general, but some smaller mass of thyroid benign lesions with papillary hyperplasia and papillary carcinoma, especially papillary microcarcinoma is difficult to distinguish, prone to misdiagnosis or missed diagnosis. Immunohistochemistry facilitate diagnosis of PTMC more easily when it is difficult to distinguish using histological criteria.

In the recent years, a large number of molecular markers in thyroid carcinoma have been used in the distinction of malignant from benign thyroid lesions. These biomarkers, such as CK19, TG, Ki67, CD56, Claudin-1, HER-2, CXCL12, TTF-1, BRAF, RET, HBME-1, Galectin-3 and so on [2]. Ki67 is a marker of cell proliferation; it has become a sensitive index of tumor cell proliferating activity. With the increasing level of Ki67 expression, the proliferative activity of tumor cells also increases [3]. CK19 is a low molecular weight cytokeratin which presents widely in simple epithelia and basal cell layers of stratified epithelium. The role of CK19 in the diagnosis of PTC is still controversial, some researcher suggested that CK19 was not a specific marker [2,4,5]. Galectin-3 is a member of oligosaccharide selective binding protein family known as lectins which plays an important role in the cell growth, cell-matrix interactions, apoptosis, neoplastic transformation and metastasis. HBME-1 is a monoclonal antibody generated against a membrane antigen of mesothelial cells. Previous researches suggested that a high positive rate of HBME-1 was observed in malignant thyroid tissues.

Immunohistochemical staining for various protein markers like CK19, galectin-3 and HBME-1 has been used frequently in the diagnosis of PTC [6-8], but the use of combinations of several proteins to evaluate the accuracy of PTMC diagnosis is still controversial. Therefore, in order to evaluate diagnostic significance of Ki67,CK19Galectin-3 and HBME-1 protein in PTMC, these four markers expression were evaluated in 120 specimens of PTMC and benign papillary hyperplasia thyroid by using immunohistochemistry in our research.

All specimens were fixed in 10% neutral formalin solution, dehydrated and embedded in paraffin following conventional tissue processing, cut into 4 um sections, and stained with haematoxylin and Eosin (H&E). Immunohistochemistry (En Vision method) has been performed, according to the kit instructions for operation: (1) Paraffin sections were removed paraffin and rehydrated. (2) Paraffin sections were washed in PBS, and blocked with 3% peroxide-methanol for endogenous peroxidase ablation. (3) Sections were incubated at room temperature for 2 hours with primary monoclonal antibody. (4) Sections were washed in PBS, and incubated with biotinylated secondary antibody for 30 minutes at room temperature. (5) The reactions became visible after immersion with DAB. (6) Finally, haematoxylin staining, conventional dehydration, sealed.

Data were analysed using SPSS V.17.0. The χ2 test was used for comparison of the data between the PTMC and benign papillary hyperplasia thyroid. Sensitivity, specificity and diagnostic accuracy of each marker were assessed in PTMC. The accuracy of diagnosis index was evaluated by ROC curve. 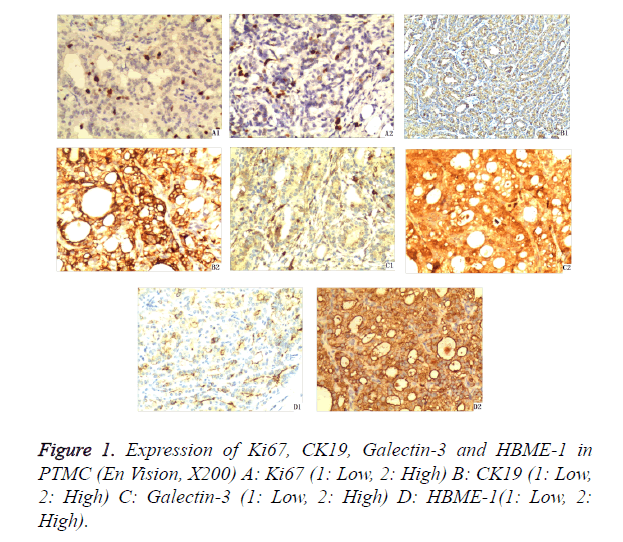 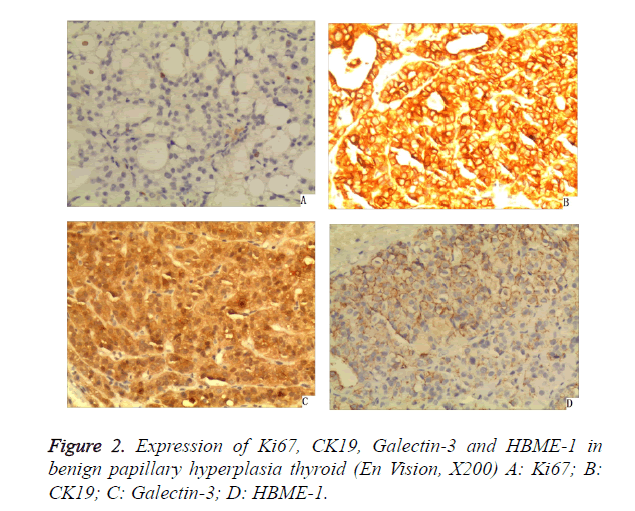 Table 2. Diagnostics performance of Ki67, CK19, Galectin-3 and HBME-1 in the distinction of PTMC from benign papillary hyperplasia thyroid. 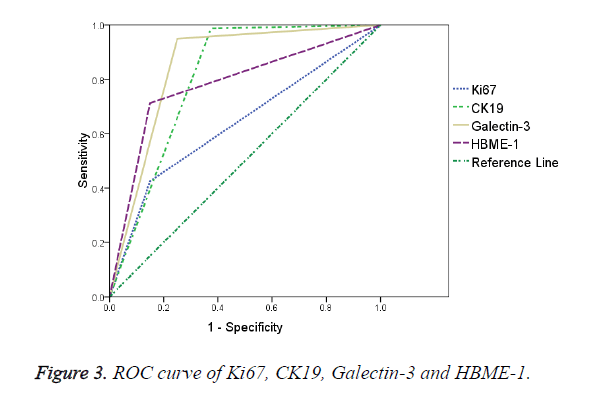 PTMC is a special subtype of PTC, the development trend of the young, accounting for 10.98%~28.10% of all the thyroid carcinoma cases [10]. The incidence ratio of male and female reported were different, mostly about 1:3, some as high as 1:9, the ratio was 1:5 in our study, consistent with most of the reported in the literature. The illness age was generally in 40~50 years old, the average age of this group is 48 ± 12 years old. The tumor size was small in generally, the smallest tumor length diameter was only 0.1 cm in this group. For the specimens in the case of seemingly as benign thyroid lesions, especially young women, the samples should been carefully examined, multiple sampling and especially paid attention to the calcified nodule, so as not to leak diagnosis. Although PTMC may be characterized by papillary carcinoma, such as glassy nuclei, nuclear pseudo inclusions and nuclear grooves, there were not many typical papillary thyroid carcinomas with these characteristics. And in some benign papillary hyperplasia of thyroid lesions, although there were no typical features of the papillary carcinoma, but when the nucleus increases, light staining and atypical changes, or papillary structure was not obvious and the nucleus was vacuolated, nuclear grooves, it was difficult to identify. Therefore, some auxiliary methods were needed to further clarify the diagnosis. We used immunohistochemistry to evaluate the expression of Ki67, CK19, Galectin-3 and HBME-1 protein in PTMC and benign papillary hyperplasia thyroid in our research, and analyse clinical significance of differential diagnosis.

Ki67 is a kind of DNA binding protein which is associated with cell proliferation and participates in the synthesis of DNA. It begins to appear in the G1 phase of the cell cycle, increases gradually in the S phase and G2 phase, reaches the peak in the M phase, and disappeared rapidly in the late stage of cell division [3]. There is no expression in the G0 phase [11]. At present, Ki67 has become a reliable indicator to detect the proliferation activity of tumor cell, and its positive expression indicates poor prognosis [12]. Choudhury [13] reported that strong expression of Ki67 in many malignant tumors. Actually, we have not found many data about the expression of Ki67 in PTMC. In our studythe positive expression rates of Ki67 were 43% in PTMC, and were 15% in benign. It was basically consistent with the conclusions of Aiad [14]. The sensitivity of Ki67 is low, but the specificity is relatively high in the diagnosis of PTMC. And diagnostic accuracy is not very high. We also found the absolute value of expression intensity was not very high, it may be related to the good prognosis of PTMC.

CK19 exists in a variety of epithelial and normal epithelial tumors, is strongly and diffusely expressed in papillary carcinoma, whereas it is usually absent or focally expressed in benign papillary hyperplasia of thyroid lesions [2,15]. Wu et al. [5] research suggests that in 331 cases of PTC, the positive rate of CK19 was 92.7%. Liu et al. [16] suggest that the expression of CK19 was 96.3%, for the PTC group. Respectively, for non-malignant thyroid lesions group, the expression was 40.4%. So the expression of CK19 in PTC was much higher than that in the benign thyroid lesions. In our study, the positive expression rates of CK19 was 99% in PTMC, respectively the rate was 38% in benign. The sensitivity of CK19 in the diagnosis of PTMC is very high, the specificity is relatively low, and the accuracy is high. Therefore, CK19 is a useful marker in the differential diagnosis.

Galectin-3 is a member of the lectin protein family, has a variety of biological characteristics, including cell growth regulation, cell adhesion, inflammatory reaction, cell apoptosis and so on. Galectin-3 is highly expressed in papillary thyroid carcinoma, but not in nodular goitre or adenoma. It is considered as one of the most valuable molecular markers to distinguish between benign and malignant tumors of the thyroid gland. Ma et al. [6] research suggests that in 43 cases of PTC, the positive rate of Galectin-3 was 95.3%. In our study, there was 76 cases positive expression in 80 cases of PTMC. The results of these researches were basically consistent. The positive expression rate of Galectin-3 was similar to CK19 in PTMC. The area under the ROC curve of Galectin-3 was the largest one. It suggested that Galectin-3 was better than CK19 in the differential diagnosis.

HBME-1 is a specific marker on the mesothelial cell microvilli surface. It plays an important role in the formation, growth and metastasis of tumor blood vessels. Early scholars found that it was also expressed in follicular thyroid cancer, especially in papillary thyroid carcinoma. A number of studies [16,17] found that HBME-1 was highly expressed in papillary carcinoma, but negative or partial expression in benign lesions. Liu et al. [16] suggest that the expression of HBME-1 was 85.3%, for the PTC group. Respectively, for non-malignant thyroid lesions group, the expression was 37.2%. Ma et al. [6] research suggests that in 43 cases of PTC, the positive rate of HBME-1 was 85%. In our study, the positive expression rates of HBME-1 in PTMC was 71%, respectively in benign was 15%, similar to that in previous researches. A number of studies [5,18,19] showed that HBME-1 combined with other tumor markers can be a better diagnosis of thyroid papillary carcinoma.