Esophageal cancers linked to lifestyle and environmental factors appears to possess varying abilities to produce Carcinoembryonic Antigen (CEA), hence in this study the diagnostic precision of CEA in patients initially diagnosed of esophagus cancer before receiving any anticancer therapy was evaluated. Serum CEA levels were assessed in healthy subjects and patients initially diagnosed of esophageal carcinoma by endoscopic examination and biopsy (N=50 each), both categories including male and female smokers and non-smokers. The test was performed by two site sequential Chemiluminescent Immunometric assay kit. Sensitivity, Specificity, Positive Predictive Value (PPV) and Negative Predictive Value (NPV) of CEA was found out and Receiver Operating Characteristic (ROC) curve plotted. Serum CEA levels were significantly higher in esophagus cancer patients as compared to control and in healthy smokers as compared to non-smokers. The overall sensitivity and specificity of CEA for detecting esophagus cancer was 38% and 80% respectively. The AUC was 0.772 (SE=0.04) and significance level P<0.0001. PPV was 65.51% and NPV was 56.34%. Using ROC curve analysis the optimum CEA cut-off point for the best combination of sensitivity 66% and specificity 86% was > 2.81 ng/ml. The CEA positivity rate before therapy was 38% which dropped to 18% after therapy. Serum CEA is a test with high specificity but insufficient sensitivity for detecting esophageal cancer in isolation. However, it may help as an additional parameter in screening the risk groups and monitoring of palliative therapy.

The annual incidence rate of esophageal cancer is increasing having mortality sixth in malignant tumor. This cancer has very poor response to current means of therapy and have devastating prognosis. The five year survival rate of esophageal cancer detected early is 70% after surgical treatment, while in patients with advanced cancer the survival rate is just 10-13% [1]. Thus management of patients with esophageal cancer is a continuing challenge for the surgeons [2]. Currently, esophagus cancer is treated by surgery with chemo and radiotherapy. The anatomic features of this organ impose radiotherapeutic and surgical limitations which contribute to poor endresults. These facts assume great significance when one realizes that cancer of the esophagus probably has high incidence in India seen at the Tata Memorial Hospital, Bombay and even in our state at S.M.S. Hospital, Jaipur. Thus, the treatment of Esophagus cancer whether by surgery or chemo and radiotherapy, needs highly sensitive diagnostic methods. Studies have supported pre-operative & post-operative measurements of serum CEA in the diagnosis, prediction of prognosis & monitoring recurrence in patients with esophageal carcinoma [3-8].

CEA described by Gold and Freedman in 1965 is a b1– glycoprotein with a molecular weight of approx. two lakh located on the luminal surface of tumor cell membrane. It is normally found in gastrointestinal tract of embryos and in smaller concentration in normal adult tissue. It functions as an adhesion molecule promoting the aggregation of human gastrointestinal cancer cells [9]. Subsequent studies have shown that concentration of CEA in malignant tissue is assessed 60 fold higher than in nonmalignant tissue [10]. CEA testing is of significant value in the monitoring of patients with diagnosed malignancies in whom changing concentrations of CEA are observed. A persistent elevation in circulating CEA following treatment is strongly indicative of occult metastatic and / or residual disease. A persistently rising CEA value may be associated with progressive malignant disease and a poor therapeutic response. A declining CEA value is generally indicative of a favorable prognosis and a good response to treatment. Patients who have low pre therapy CEA levels may later show elevations in the CEA level as an indication of progressive disease.

Therefore, this study was planned under following aims: 1) To evaluate the diagnostic precision of serum CEA in patients suffering from esophageal cancer before receiving any sort of therapy and diagnosed recently. 2) To calculate the Sensitivity, Specificity, PPV and NPV of CEA in detection of esophageal cancer. 3) To find out best cut-off point of CEA for optimum combination of sensitivity and specificity by ROC curve analysis so that it may serve as an additional survelliance investigation for diagnosing and timely institution of palliative therapy among esophagus cancer patients and may even help to screen the risk groups in healthy smokers.

The subjects included 50 patients suffering from esophageal cancer diagnosed by endoscopic examination and biopsy and have not received any anticancer therapy before. 50 healthy subjects devoid of cancer were taken as normal control group.

Healthy subjects: Both smoker and non smoker not diagnosed of any gastrointestinal disease or cancer.

Patients: Those suffering from esophagus cancer currently diagnosed by endoscopic examination and biopsy and have not received any anticancer therapy.

Healthy subjects with any sort of GI infections or disease. For cancer patients: Patients receiving therapy from long time.

Each patient was strictly examined first by brief clinical history related to diet, lifestyle, initial symptoms or any treatment received before.

For every subject a brief smoking history was taken, whether smoker or non-smoker, method of smoking via cigarette, pipe, cigar, tenduleaf smoking stick etc. Quantity smoked per day if more than 10 cigarettes per day than heavy smoker, less than that smokers, and who did not smoke, or quit smoking from last few months were under non-smokers.

Both the categories i.e. of esophagus cancer patients and healthy control subjects were further divided under various sub-groups:

A written and informed consent was obtained from all the study subjects. The present study was performed after the approval of institutional research committee, S.M.S. Medical College and Hospital, (Rajasthan univ. of health sciences) Jaipur, Rajasthan, India. Ref.no.RS/278.

The Blood samples were collected before starting of any therapy in esophageal cancer patients and as a part of routine investigation in healthy subjects. Samples were taken in plain vial and allowed to clot. Serum was separated by centrifuging at 3000 rpm for 10 min and stored at – 20oc till further assay was performed.

Taking into consideration the range for normal healthy control group the upper limit of carcinoembryonic antigen is:

The data were analyzed using SPSS Software version 10.0 (SPSS Inc. USA) and MedCalc to estimate the significance of the observed differences and plotting ROC curves. Sensitivity, Specificity, PPV and NPV were calculated by the formulae given below and ROC curve plotted to give optimum cut-off of CEA for maximum sensitivity and specificity.

Table 1: Distribution of esophagus cancer patients and healthy control subjects in various sub-groups and number (n) of cases and healthy subjects +/- for CEA 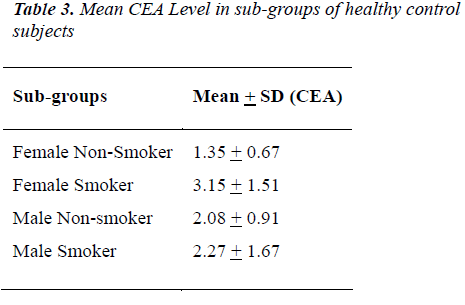 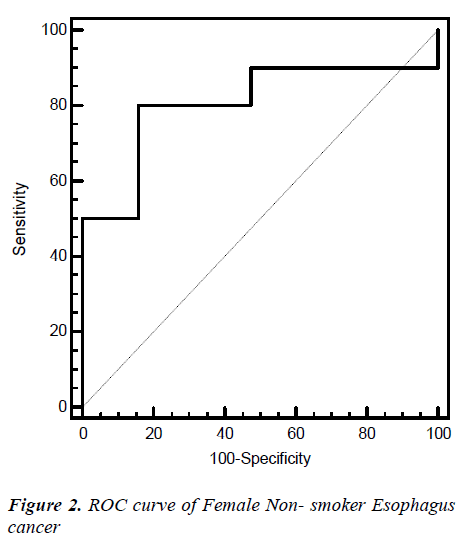 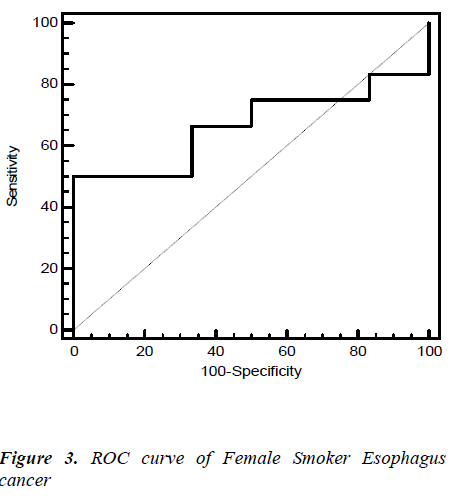 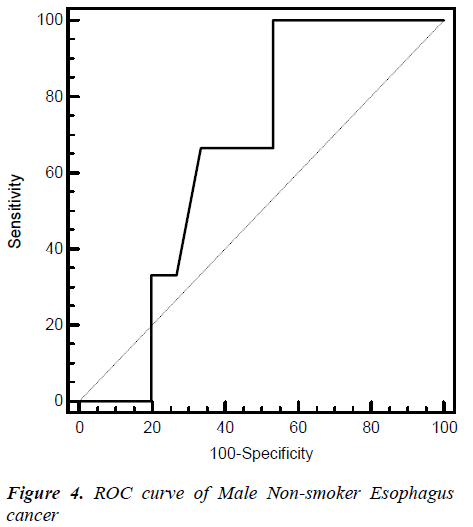 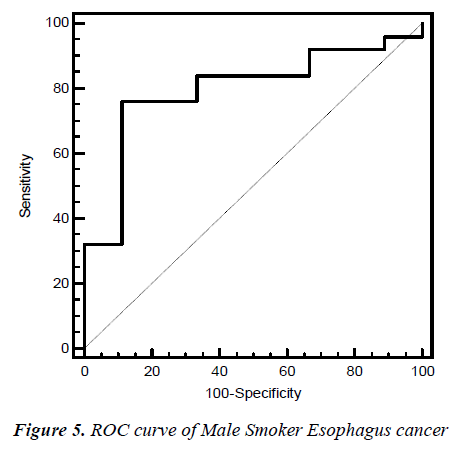 A study published in Dec. 2011 estimated that in U.K. 89% esophageal cancers are linked to life style and environmental factors. 63% esophageal cancer in men and 71% in women in U.K. in 2010 were caused by smoking [11]. Thus, smoking proves to be a major risk factor for esophagus cancer as it causes acid reflux and damages cell DNA of esophagus [12]. Carcinoma of esophagus appears to possess varying abilities to produce CEA hence CEA levels appear to be promising as a marker of tumor presence and this is seen in our result also where esophagus cancer group has significant higher level of CEA as compared to control group [1]. This was even supported by studies of Eva Munck wikland et al [5]. Thus CEA may help along with other investigations in planning of palliative therapy and its monitoring. Our data also indicates significant higher levels of CEA in smokers as compared to non-smokers of normal control group which supports the view that CEA protein in serum of cigarette smoker is twice higher than non-smokers. This was even studied by I. Fukuda et al., Kornek G. et al [13,16]. Thus, in control group this may help to screen the risk groups for esophageal cancer, as smoking increases the risk of both squamous cell carcinoma and adenocarcinoma discussed with a recent pooled analysis of European studies showing a four fold increase of esophageal cancer overall among current smokers [14].The sensitivity and specificity of CEA in detecting esophageal cancer was near about the study of Anbreen et al. done in upper gastrointestinal tract carcinoma [15].

It is as yet an unrecognised fact in geographic pathology that cancer of the esophagus has high incidence in India. An analysis of patient material reveals that 51% of cases are too advanced for any treatment at their initial presentation. Carcinoma of esophagus is a very lethal disease relatively unresponsive to therapy. Thus a comprehensive diagnostic programme is of great importance for successful therapy.

A persistently rising CEA value may be associated with progressive malignant disease and a poor therapeutic response. A declining CEA value is generally indicative of a favorable prognosis and a good response to treatment. Patients who have low pre therapy CEA levels may later show elevations in the CEA level as an indication of progressive disease [17].

Our findings suggest that although, sensitivity of CEA is low, it may prove as an additional parameter in conjunction with clinical radiological and histological confirmation for diagnosing and timely institution of palliative therapy among esophagus cancer patients. The best cut-off value for optimum balance of sensitivity and specificity estimated by ROC curve may prove useful as an additional surveillance investigation for malignant v/s non-malignant disease.

We express our sincere thanks to the Cancer Radiotherapy Department, S.M.S. Hospital, Jaipur for providing their help in above study.