Diagnosis of first-trimester fetal hepatic cyst: About a case.

The discovery in the first trimester of an ultrasound anomaly including intra-abdominal anechoic picture is not exceptional and almost all abdominal organs may be involved. However, it has been reported less than 40 cases in the literature and it was most often clinical cases rarely series.
These intra-abdominal anechoic images can be single, multiple and interesser one or more organs at once. Finally, they may be isolated or associated with other anomalies. The prognosis depends mainly on the presence of other morphological abnormalities, the type of body concerned or a chromosomal alteration associated. The management must be multidisciplinary and comes down mostly due to lack of supervision or recommendation to a therapeutic abortion. In any case a neonatal management should be planned.

Ultrasound examination of the first trimester (T1), in addition to the precise dating of pregnancy aims at carrying out a primary morphological evaluation of the fetus. Thus, during this examination, many morphological abnormalities and some chromosomes can be evidenced. It is ideally held between 10 weeks+6 days of amenorrhea and 13 weeks+6 days. The discovery in the first trimester of an ultrasound anomaly, particularly an intra-abdominal anechoic image (IAI) is not exceptional; moreover almost all abdominal viscera may be affected. However, less than 40 cases have been reported in the literature, mostly clinical cases, rarely in the series [1,2]. These intra-abdominal anechoic images may be unique, multiple and may involve one or more organs at a time. They may also be isolated or associated with other anomalies. In case of doubt or discovery of an abnormality during this T1 ultrasound, it is necessary that the patient has ultrasound where a trophoblast biopsy or amniocentesis will be discussed.

Evolution of IAI in most cases, except those associated with other serious malformations or abnormalities, is unpredictable and depends on several factors [3]. The prognosis relies mainly on the presence of other morphological abnormalities, the type of organ concerned or associated chromosomal alteration. Treatment should be multidisciplinary and usually consists, for lack of recommendation, of monitoring or therapeutic termination of pregnancy. In any case, if the continuation of the pregnancy is retained or desired by the parents, a neonatal care will have to be planned. We are reporting below on a case of isolated intra-abdominal cyst and probably of hepatic origin discovered at 12 weeks in another 25 years old pregnant woman.

Ms C., 24 years old, with a history of voluntary abortion in 2006 during the first pregnancy, non-insulin dependent gestational diabetes during the second pregnancy in 2010, ended with a normal delivery of a 3440 g baby boy at full term. She was admitted at 12 weeks and 3 days for an ultrasound at T1. The evaluation of the parameters recommended by the French technical committee of ultrasound, found a cranio-caudal length of 65.03 mm, at 12 weeks and 5 days pregnancy, a nuchal translucency of 3.24 mm and a bi-parietal diameter of 20.57 mm as shown in Figure 1. In addition, there was an intra-abdominal anechoic image, with a straight diaphragm of 16.59 mm, cystic, non-vascularized, thin-walled and with some thin intra-cystic membranes as shown in Figure 2. Liver or kidney involvement was not obvious. The rest of the examination was uneventful. The amount of amniotic fluid was normal. The patient was subsequently referred to the Necker Antenatal Diagnostic Center where nuchal translucency was measured at 2.7 mm. no other abnormalities were observed. 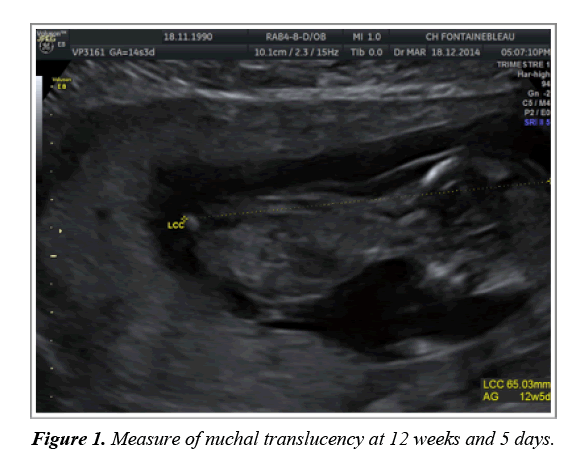 Figure 1: Measure of nuchal translucency at 12 weeks and 5 days.

Figure 2: Median parasagital ultrasound section with measure of the largest diameter of the cyst that is not vascularized at the Doppler.

The serological results were as follows:

• Immunization against rubella and toxoplasmosis.

• Positive cytomegalovirus on a single sample. Later on, a high anti-CMV IgG avidity at 14 weeks contributed to rule out an infection during pregnancy.

Hence, a trophoblastic biopsy was performed, and also the report on molecular analysis using array CGH in prenatal diagnosis did not reveal any genomic imbalance. The chromosomal formula was 46 chromosomes; Arr (1-22) x 2, (XY) x 1.

Moreover, gestational diabetes was diagnosed and treated with diet alone.

The evolution was marked by normal fetal growth detected by ultrasound. The ultrasound at 17 weeks showed a significant decrease in cyst size as shown in Figure 3, normal fetal growth and amniotic fluid. At 23 weeks and 3 days as shown in Figure 4, we saw a complete regression of the cyst, leaving only two small residual calcifications of 2 and 3 mm. The amniotic fluid volume remained steady. 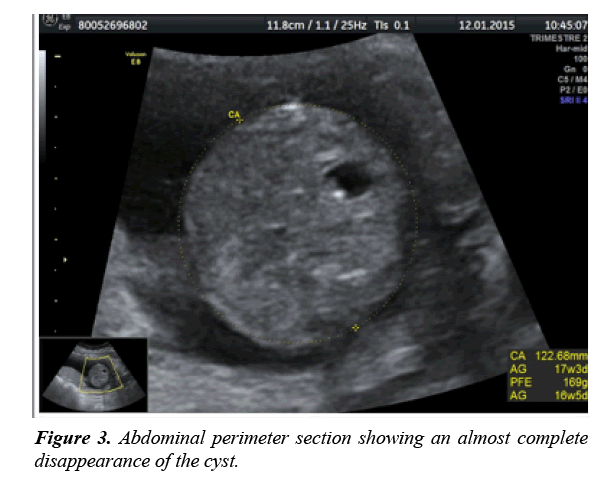 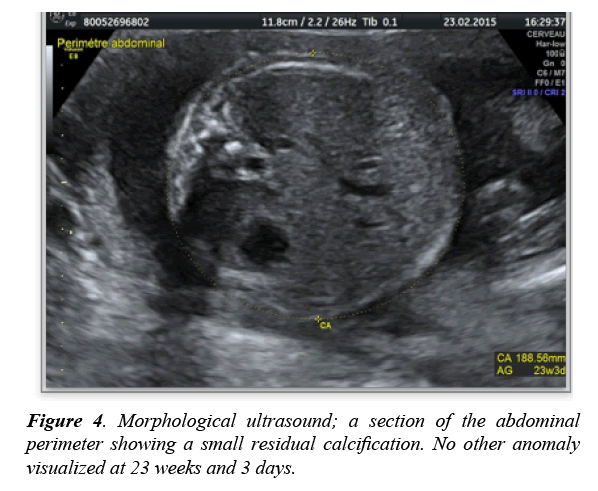 Figure 4: Morphological ultrasound; a section of the abdominal perimeter showing a small residual calcification. No other anomaly visualized at 23 weeks and 3 days.

At 37 weeks, pre-eclampsia was found, coming to a maturity, and then the onset of labor. This resulted in the birth of a male baby, Apgar score of 10/10, and weighing 3735 g.

First trimester (T1) ultrasound allows precise dating of the pregnancy, so taking this opportunity, a first morphological evaluation of the fetus has to be performed. It takes place between 10 weeks and 6 days and 13 weeks and 6 days. Usually transabdominal, it can possibly be carried out by the transvaginal route. Any abnormalities discovered by screening should be carefully studied in a reference center and other invasive examinations may be required (amniocentesis, trophoblast biopsy). The discovery of pathological intra-abdominal images (anechogenic, hyperechoic or mixed) is rare during the first trimester of pregnancy. Few cases have been reported in the literature, about thirty, and rarely in series [1,2]. However, they can be distinguished from normal anechoic images (umbilical vein, gallbladder, stomach, abdominal aorta and bladder). Until now there is no known real incidence of these pathologies due to the scarcity of related data in the literature. Only two series studies are currently available, and are limited in numbers. Referring to the latter, there was no correlation between maternal status and their occurrence. They were young women aged between 20 and 30, same as in our case. Almost threequarters of these cases involved isolated homogenous cysts with anchogenic and thin-walled contents (about 80% of cases) [2]. Resolution is spontaneous before 20 weeks; usually around 17 weeks. The hyperechoic and mixed images are rarer; they are associated with other abnormalities and different prognosis.

These images can be hosted on different abdominal organs such as kidneys, digestive tract, liver and bile ducts, and rarely on ovaries in the young girl. Diagnosis of hepatic cysts is usually easier to make in the second and third trimesters, however some authors have reported genuine cases in the first trimester. In the various cases reported, the mean diameter varies between 4 and 29 mm with an average of 15 mm. It was 16.59 mm in our case. No other morphological abnormality was found at the antenatal diagnostic center, the karyotype returned normal. This ranks our case among those with an isolated abdominal cystic image, so resulting in better prognosis. Concerning our patient, the ultrasound performed at 17 weeks found again a considerable decrease in the size of the cyst as shown in Figure 3; total disappearance of the cyst was confirmed at 23 weeks and 3 days, and leaving on the spot a couple of 2 and 3 mm calcifications as shown in Figure 4.

Confirmation of the diagnosis of hepatic cyst is difficult in the first trimester. At this stage, several differential diagnoses may be advanced, notably liver and biliary anomalies, malformations of the digestive tract mainly duplications (esophageal cystic duplication, gastric duplication, small bowel) and other digestive cysts [4]. However, if positive diagnosis is easy, determining that it originates from the digestive tract or from a precise organ can be difficult, and so requires better evaluation, fetal magnetic resonance imaging (MRI) in particular. Classically, they are opposed to megalocystis and ovarian cysts of female fetuses.

Duplication of the gall bladder and atresia are the most frequent abnormalities of the vesicle and bile ducts. In the prenatal period, the gall bladder can normally be accessed from 14 weeks in the first trimester [5,6] in the form of an elliptic or circular cystic image to the right of the intrahepatic umbilical vein and on the lower edge of the liver. Under ultrasound, atresia of the gallbladder associates the absence of visualization of the gallbladder with a cystic formation of variable size in the liver hilum. Its incidence is estimated from 5/100,000 to 32/10,000 [7]. It may be syndromic and may be associated with intestinal malrotation, situs inversus or malposition of the spleen. It is unlike the other cystic images isolated from a serious illness. Duplication of the gall bladder is another cause of uncommon cystic imaging. Ultrasound diagnosis is very difficult in the first trimester [8]. It appears in the form of two parallel tubular structures, and non-vascularized under the Doppler. Unlike atresia, and like most other isolated cystic images, it has a good prognosis and does not require any special obstetric care. Gastric duplication occurs in the form of a liquid image with a more or less thick wall and a strictly anechoic content. Diagnosis is easier as far as the lesser curvature of the stomach is concerned.

However, it is usually shaped as an antral mass. It is accessible on the first trimester of pregnancy. Meconium ileus and peritonitis are the main inherent complications. Confirmation of the diagnosis is histological and relies on the observation of an outer smooth tunica muscularis along with the muscularis, and an internal coating specific to the duplication, including at least partially the gastric mucosa. Duplication of the small intestine is equally inaccessible in the first trimester. It combines an anechoic structure of variable size, thick-walled made up of a hyperechoic inner layer and a hypoechoic peripheral layer. This structure has peristaltic movements. Moreover, there is a close contact with another digestive structure, most often in the ileo-caecal area. Its association with oesophageal duplication is classical [9,10].

The finding of an intra-abdominal cyst on the first trimester of pregnancy is an unusual situation, likely to cause stress to parents and to the sonographer. Faced with such images, a reference examination is recommended, and hence other more invasive investigations can be requested and conducted. The most common etiologies affect the liver, biliary tract and digestive tract disorders (ileal gastric duplications and atresia). However, although the literature does not report many cases, it is known that those isolated examples usually have a good prognosis and disappear before 20 weeks. Intestinal malformations are the main complications described.