This present experiment deals with a formulation of novel drug delivery system of chitosan implants to modulate the release of ketorolac through the fabrication of subcutaneous implant. The implants were prepared by compression technique. The chemical stability and the characteristic features of surface morphology of the implants were confirmed by using FTIR and SEM. The thermodynamic behavior of the novel implants was investigated by using DSC/TGA. The loading capacity of Ketorolac into chitosan implants was also evaluated. The release kinetic parameters were studied in dissolution media of phosphate buffer solution (PBS). The results find that the final formulation maintains chemical stability of the drug. The morphological features of the implant confirmed uniform inclusion and distribution of ketorolac into the chitosan matrix with an evidence of porous structure. The drug release pattern of the Ketorolac exhibited controlled release behavior from chitosan implants up to 45 d governed mainly by drug diffusion mechanism. The formulated of novel implants have shown a great potential in the long term subcutaneous delivery of ketorolac.

Ketorolac can be classified as model non-steroidal antiinflammatory drugs (NSAIDs) that are highly effective for the treatment of symptomatic and non-symptomic pain and inflammation. Compare to other conventional NSAIDS ketorolac is highly effective for management of different kind of pain and inflammation [1]. The mechanism of ketorolac is mainly involved in reduction of synthesis of prostaglandins and other inflammatory chemicals that are originated from the immune system. However, oral administration of ketorolac has many shortcomings including low patient compliance [2,3]. Preparations that reduce tolerability help patients with diseases of chronic pain such as terminal cancer and lethal autoimmune disease. In a previous study, implantable drug delivery system reduced the opioid reported toxicity to a large extent [4-6]. The present experimental study aimed at designing of novel ketorolac formulation in a specially designed subcutaneous biocompatible implant that can control the drug release for more than 45 days. Thorough literature investigation of subcutaneous implants reveals that the use of the long acting biodegradable polymer chitosan to design the formulation of ketorolac has not been executed before. Therefore, our investigation to design prolonged release dosage formulation in the form of subcutaneous implant will be useful for effective treatment and management of operative and non-operative pain.

Required amount of Chitosan powder, glycerol or Tween 80 PEG 6000 as mentioned in Table 1 were heated at a temperature of 75°C on a water bath under stirring condition with a glass rod. The exact quantity of pure Ketorolac drug was dispersed uniformly when the entire mass is in semi melted condition. The solidified blend was kept in a refrigerator for more than 1 h. After the solidification of the mass, hard mass was converted to fine powder and the entire fine mass passed through a sieve (aperture 0.45 mm). The fine granules were properly lubricated with talcum and compressed form 10 mm (flat) tablet shaped pellets. 7 different formulations were designed and formulated by using various quantity of glycerol or Tween 80 concentration [7].

The compressed implant in the form of tablets were crushed into powder form and the chemical stability of the powder samples were analyzed by a using a Perkin Elmer Spectrum 2000 FT-IR spectrometer, universal FTIR spectrum series at a resolution of 4 cm-1 [8].

Thermodynamic behavior of the ketorolac-loaded implants

The thermal behavior of the compressed implants in the form of tablets was evaluated by using Differential Scanning Calorimeter (DSC) and thermal gravimetric analysis (TGA). The required quantity of the samples (100 ± 1 mg) was placed in platinum crucible with a specified heating range of 25-500°C with a heating rate of 10 C/min [9].

Morphological features of the ketorolac-loaded implants

The internal morphological features and surface area of the ketorolac loaded implants was investigated by using Scanning Electron Microscope (SEM). Samples were undergone the process of gold-sputter coating (SPI ModuleTM Sputter Coater, SPI Supplies, PA) for the purpose of rendering electrically conductivity to the samples before analysis [10].

Actual concentration of loaded ketorolac in prepared implants was estimated by grinding ketorolac-loaded implants and extracting ketorolac in DMSO by at a temperature of 40°C for more than 6 h. The final solution was then properly filtered and diluted with Phosphate buffer solution. The concentration of ketorolac was then estimated UV spectrophotometry. All measurements were performed in triplicate and the encapsulation efficiency and the percentage of loaded ketorolac was calculated. The in vitro drug release of ketorolac implant was calculated in PBS (pH 7.4; 37°C) at different time intervals using UV-vis spectrophotometer (Lambda 25 UV/Vis Spectrophotometer, PerkinElmer, MA, USA) at a wavelength of 271 nm.

In order to evaluate the release mechanism of the ketorolac the percentage of drug release data were compared with the fundamental mathematical models of zero order, diffusion and using the Korsmeyer-Peppas equation.

Chemical integrity of the prepared implants evaluated by the FT-IR spectra of ketorolac-loaded implants are illustrated in Figure 1. A strong band in the region 3611 cm-1 corresponds to N-H and O-H stretching, as well as the intramolecular hydrogen bonds. The absorption bands at around 2921 cm-1 can be attributed to C-H symmetric and asymmetric stretching, respectively. These bands are characteristics of typical polysaccharides. First, the characteristic bands of the basic polymers were observed as follows; the main characteristic bands of chitosan were observed at 1652 cm-1 corresponding to carbonyl stretching, bands at 1423 and 1112 cm-1 indicating CAC and CAO stretching in chitosan. 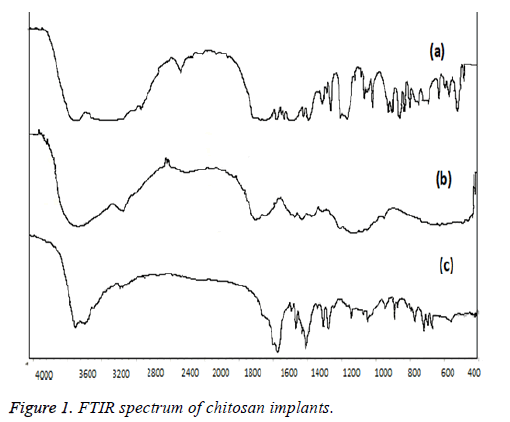 Ketorolac showed major characteristic bands as follows (3348 cm-1 (NH stretch), 1726 cm-1 (C=O the vibration stretching of carboxylic acid groups stretch for acid) and 1172 cm-1 C=O for diaryl ketone). In Figure 1, the FTIR spectrum of final chitosan-implant representing the chemical integrity of the ketorolac loaded in chitosan implants. It is clearly evident that the entire major characteristic peak which corresponds to identify of both chitosan and ketorolac are clearly visible. So the chemical integrity and stability of the drug and polymer in the final form of chitosan implant are intact.

Thermodynamic behavior of the ketorolac-loaded implants 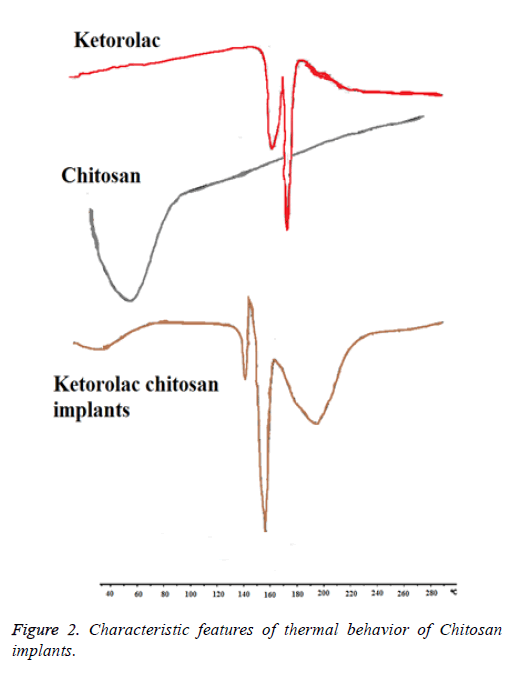 Morphology of the ketorolac-loaded implants 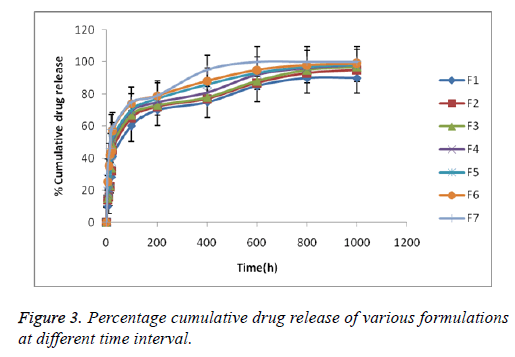 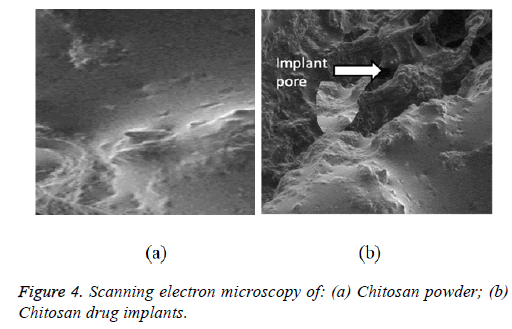 The entrapment efficiency values ranged from 98.00 ± 0.70% for all the formulation. The cumulative drug release (%CDR) profiles of ketorolac-loaded implants are presented in Figure 4. Ketorolac exhibited controlled release behavior from chitosan implants up to 1000 h. The formulation F5 shows a longer duration of time.

In vitro ketorolac release from ketorolac-loaded implants was fitted using different mathematical models and the kinetic parameters are listed in Table 2. It is evident from the release figure that the plots are curvilinear suggesting that the release process is not zero-order in nature. The release pattern is very close to Korsmeyer-peppas model.

Subcutaneous chitosan implant is formulated and designed by many researchers. Most of the work of subcutaneous drug delivery where chitosan and other polymers were used is based on longer duration of release profile [7,11-13]. Use of various polymers other than chitosan also has been investigated by various researchers but the results are not found very satisfactory. FTIR investigation is indicating that the interaction between physical and chemical aspect is minimal and can be neglected. In respect of melting point ketorolac in implant have a minimum shift as compare to raw drugs. Minimal shifting of melting point indicates the thermal behavior of the polymers and the raw drug has been not changed which is a positive aspect of chitosan implants.

The ketrolac drug release pattern an important criterion for successful development of subcutaneous implant drug delivery system. The dissolution study clearly indicating that chitosan based implant formulation are highly successful for delivering the drug release up to 45 days. For successful management of terminal cancer pain long-term medication in the form of subcutaneous implant dosage form may be an effective alternative of opoid based analgesic. Scanning electron microscopy of the final formulation is showing smaller pores like structure is present in the implant formulation which definitely creates a sustained property of the chitosan implant. In addition the release kinetic behavior is following Korsmear model which is showing the implant possess good characteristics of sustained release formulation. Most of the formulation is showing good release pattern among them F1 formulation is sustaining the release pattern for longer hours. As the n value of all the formulation is below 0.5. So it is clearly evident that the release pattern follows quasi Fickian diffusion. Therefore, the final results of the kinetic study permit us to make a conclusion that the chitosan based fabricated implant are able to prolong the drug release through diffusion pore for longer duration of time.

CHITOSAN polymer represented a good candidate for implant, where obtained integrity was intact and ketorolac release was sustained for more than 700 h. Moreover, the presented complex did not affect the chemical integrity or stability of the drug. The polymer proved its biodegradation and weight loss during the experimentation period. The in vitro study suggested that the proposed system can be valid for sustaining the drug for at least 45 d in vivo. Ketorolac exhibited controlled release behavior from Chitosan implants up to 1080 h.

The present study was supported by Acharya and BM Reddy college of Pharmacy, Bangalore-560107.