Introduction: The present study is to investigate the total antioxidant activity (TAC) in suspected neonates of inborn errors of metabolism with high risk, moderate risk and low risk. Dried blood spots have potential use in remote health applications for individual and population diagnosis and can enable epidemiological surveillance for known and unknown diseases. Dried blood spot sampling is most common method for collection, storing, transporting and analyzing a variety of human body fluids.

Materials and methods: After performing, while newborn screening is early period, the balance residual samples were used for specific secondary research studies with patient consent. Here we are using the secondary studies of DBS for total antioxidant activity as one of the biomarkers to find out the disease condition. TAC was evaluated in 449 risk subjects and 531 control neonates including high, moderate, low risk and healthy individuals. The risk variables were included birth weight, APGAR score, gestational age and previous complications of pregnancy. DBS -TAC method, is to elute sample by using phosphate buffered saline. After sample preparation, TAC by using FRAP assay (ferric reducing antioxidant power assay) were estimated by among four groups with risk indicators.

Discussion: DBS-TAC can be used as early biochemical marker for oxidative stress in high risk for IEM (Inborn errors of metabolism) which may result in reduced tissue damage by free radicals and help to monitor and optimize antioxidant therapy in such high risk neonates.

Conclusion: FRAP assay is presented as a novel method of assessing total antioxidant capacity and is considered as a useful indicator of the body's antioxidant status to counteract the oxidative damage due to ROS. The advantage of the FRAP assay is in being fast, easy to handle, with highly reproducible results. A significantly lower DBS TAC concentration in the IEM high risk patients compared to controls reflects a lower total antioxidant capacity. Thus, TAC may be useful as an early marker of oxidative stress to monitor and optimize antioxidant therapy as an adjunct in the management of IEM patients.

These diseases will be included in the first case, because the annual birth rate is 21.76 births /1000 population and in Delhi alone, nearly 900 births takes place every day; considering this figure there may be one or two babies born Delhi alone with a metabolic defect each day [1]. One in every 1,000 newborns has inborn errors of metabolism (IEM) or other disorders that can be detected at birth by screening (Table 1). Inborn errors of metabolism, often referred to as congenital metabolic diseases or inherited metabolic disorders are rare genetic (inherited) disorders in which the body cannot properly turn food into energy. The disorders are usually caused by defects in specific proteins (enzymes) that help break down (metabolize) parts of food [2].

The study has been approved by the institutional human ethical committee approval from Madras Medical College, Chennai: Approval No. 32042018 and obtained consent form from parents for the participation of this research study. Under aseptic conditions with precautions about dried blood spots sampling was collected from suspected IEM neonates and from healthy controls. All neonates aged (0-28) days after birth, normal newborns and including low birth weight neonates and that admitted to Neonatal Intensive Care Unit (NICU), Institute of obstetrics and Gynaecology and Govt. hospital for Women and Children, will be systematically enrolled into the study. The neonatal heel prick or Guthrie test is a screening test done on newborns. It consists of making a pinprick puncture in one heel of the newborn and soaking the blood into pre-printed collection cards known as Guthrie cards. Heel prick capillary blood collected on S&S 903 filter paper, air dried and transported along with ice pack in cold storage.

The study was conducted at Department of Biochemistry, Regenix Super speciality laboratories pvt ltd, Chennai. The study included 980 neonates aged under 28 days of life of either sex (201 male babies with mean age of 11 days, 223 female babies with mean age of 9 days and 25 ambigous genitalia babies with mean age of 6 days) were suspected as inherited metabolic disorders confirmed by specific assays like BIORAD-Quantase neonatal screening, aminoacid and acyl carnitine profiling by Tandem mass spectrometry, before the commencement of therapy and 531 neonates, age and sex matched healthy controls. The demographics of this study population shows risk factors associated with maternal complications type of delivery, familial conditions, mother’s history, drugs usage, gestational age, number of births, and number of previous siblings death (Figure 1). IEM suspected neonates were further classified according to the ACMG recommended panel criteria. All subjects underwent an initial screening that included a detailed history, signs, symptoms, clinical and laboratory findings of neonates were eligible if they had symptomatic conditions. Exclusion criteria were as follows as: signs of severe infection, severe vomiting, and congenital anomalies. 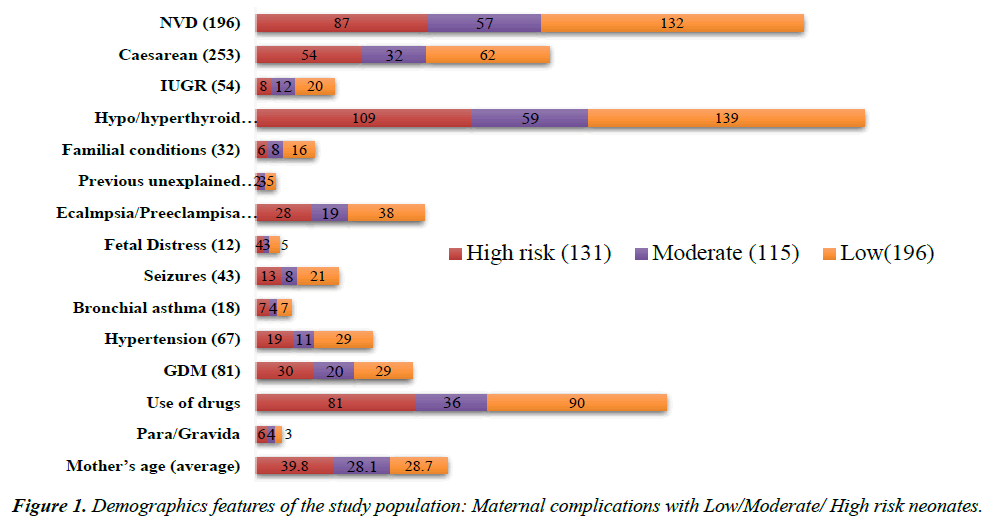 Phosphate Buffered with Saline (10X): 800 ml of distilled water; 8 g of Nacl; 200 mg of Kcl; 1.44 g of Na2HPO4; 240 mg of KH2PO4, pH-7.4 and add distilled water upto 1L. For sample preparation, simply punch out single 3 mm disc with dried blood spots in a 1.5 ml eppendrof, Add 200 ul of phosphate buffered saline then centrifuge with 12,000 rpm spin column for 2 to 5 mintues. The eluted sample is ready to use. The standard method for the total antioxidant activity was estimated by FRAP method by Benzie.F.F. and J.J.Strain. Total antioxidant capacity was measured by FRAP assay according to the method of Benzie.F.F. and J.J.Strain [3]. At low pH, when a ferric tripyridyltriazine (Fe III-TPTZ) complex is reduced to the ferrous (Fe II) form, an intense blue colour with an absorption maximum at 593 nm develops. Antioxidant power convert ferric to ferrous tripyritriazine complex. Ferric reducing ability of plasma (FRAP) values are obtained by comparing the absorbance change at 593 nm in mixture(test), with those containing ferrous ion in known concentration (Table 2).

Like FRAP assay, estimation of lipid peroxidation by MDA, Vit E, Vit C and SOD enzyme levels were carried out on DBS samples were measured by UV-Spectrophotometry (Chemito). Vitamin E was estimated by Baker and Frank method [4] and vitamin C by 2, 4 – DNPH method [5]. SOD enzyme activity was determined with the direct spectrophotometric method employing KO2 as previously described by Marklund, with some modifications [6,7]. Lipid peroxidation was measured by MDA estimation according to the colorimetric method of Satoh.k [8]. Lipoproteins are precipitated from the specimen by adding trichloroacetic acid. 0.05 M sulphuric acid and 0.67% thiobarbituric acid (TBA) in 2 M sodium sulphate are added to this precipitate and the coupling of lipid peroxide with TBA is carried out by heating in a boiling water bath for 30 minutes. The resulting chromogen is extracted in n-butanol, which is measured at 530 nm.

Table 3.  Comparison of oxidants and antioxidants profile in suspected cases of IEM.

The inborn errors of metabolism involve three inter-related and often overlapping factors as accumulation of toxic metabolite, deficiency of essential metabolites, and impaired functions of mitochondria. Oxidative stress often results has been proposed as a prime cause of the cellular injury that causes in the IEM. We quantified total antioxidant activity as early biochemical marker in various IEM to test their potential utility as clinically relevant marker. Likely SOD levels, Vit E, Vit C, MDA levels have been employed to measure oxidative and antioxidants stress in vivo using dried blood spots sampling as a secondary use of residual blood spots after it used for the neonatal screening.

In this study the biomarkers, taken as a whole, elevated markers of oxidative damage and depleted antioxidants defenses were seen in most of the IEM diagnostic group we assessed. In aminoaciduria’s, the ketogenic acids have been showing to include oxidative models. Previous studies on Urea cycle disorders under treatment found elevated levels of oxidative damage were seen in subjects with endocrine metabolic disorders like CH and CAH. Decrease antioxidant activity was marked in organic acidurias[9-12]. The summary of the oxidative stress, where elevated levels in high risk patients compared with control groups. DBS-TAC can be used as a early biochemical marker for oxidative stress in high risk for IEM (Inborn errors of metabolism) which may result in reduced tissue damage by free radicals and help to monitor and optimize antioxidant therapy in such high risk neonates (Table 4).

Table 4. Correlations between oxidants and antioxidants in Suspected IEM cases.

The risk of IEM is inversely proportional to TAC in neonates. Under normal conditions, the ROS produced in the course of metabolism are contained by the natural antioxidant system which consists of a series of antioxidant enzymes such as superoxide dismutase (SOD), catalase, glutathione peroxidase as well as numerous endogenous and dietary antioxidant compounds that are capable of reacting with and inactivating ROS thereby protects the functional and structural molecules against ROS-mediated tissue damage. MDA is a three carbon, low molecular weight aldehyde that can be produced from free radical attack on polyunsaturated fatty acids of biological membranes [13,14].

The determination of MDA is used for monitoring lipid peroxidation in biological samples. TAC reflects the increased formation of ROS and lipid peroxidation with progressive symptoms to evalute. Vitamin E, a potent chain breaking lipid soluble antioxidant, reacts with lipid peroxyl radicals eventually terminating the peroxidation chain reaction and thereby reducing oxidative damage. Vitamin C represents the major water-soluble antioxidant in the human body. SOD is an endogenous antioxidant that catalyzes the disputation of the superoxide anion radical [15-19].There are conflicting reports in the values of antioxidant vitamins (vitamin E and vitamin C) and SOD enzyme activity among IEM high risk cases in various stages in the literature. In our study, vitamin E, vitamin C, SOD and TAC levels are decreased in high risk cases.

FRAP assay is presented as a novel method of assessing total antioxidant capacity and is considered as a useful indicator of the body's antioxidant status to counteract the oxidative damage due to ROS. The advantage of the FRAP assay is in being fast, easy to handle, with highly reproducible results. A significantly lower DBS TAC concentration in the IEM high risk patients compared to controls reflects a lower total antioxidant capacity. Thus, TAC may be useful as an early marker of oxidative stress to monitor and optimize antioxidant therapy as an adjunct in the management of IEM patients.