198 adult human radii of known age, sex and race available in the bone bank of Department of Anatomy, Government Medical College Aurangabad (Maharastra) were used for the present study. Out of 198 bones 133 were of male and 65 were of female. Six measurements of radius were pushed into step-wise multivariate discriminant analysis. Among the six variables, the best function was obtained by antero-posterior diameter at mid-shaft (Ams) with the lowest Wilk’s lamda (0.503),the highest enigvalue (0.987), the highest canonical correlation (0.705), and the highest percentage of correct classification (90.4%).The second best function was obtained by Circumference at mid-shaft (Cms). Vertical diameter of the radial tuberosity (Vrt) shows far less classification capacity, because it includes the highest wilk’s lamda (0.830), the lowest enigvalues (0.205), the lowest canonical correlation (0.315), and the lowest percentage of correct classification (71.7%). Linear function was obtained using antero- posterior diameter at mid-shaft, circumference at mid-shaft and vertical diameter of radial tuberosity, witch could classify 89.9% of radii correctly.

Determination of the sex of the unknown decomposed body is one of the most important tasks in the medicolegal cases and skeletal remains play a very important role for establishing the identity of the subject [1]. Apart from forensic sciences, determination of sex is an equally important objective in the field of the physical anthropology, bioarchaeology, palaeodemography and anatomy. Various precedent studies have dealt with sexual dimorphism of pelvis, crania and long bones from the discriminant function analysis, accuracy of sex classification is 95% for adult pelvis and 92% for the skull [1,2]. Sexual dimorphism affects the dimensions of the bone, which differs within and between the populations [3]. These differences allow the development of discriminant functions which reduce the subjectivity of sexual diagnosis from morphologic traits [3]. The discriminant functions are population specific and differs with race and geographical location [3,4]. Skull, pelvis and sacrum are the bones of choice to determine the sex of an unknown individual. Sometimes in the medicolegal cases challenging situations comes when a doctor is asked to detect the sex of the decomposed body where these bones might not be available. In such cases, it is a big task to determine the sex of an individual in the absence of the above mentioned bones. Therefore, it is necessary to formulate discriminate functions for the other bones, especially the long bones like radius that is frequently found in skeletal remains. Here we present the utility of radius in determining the sex using its different measurements.

Study samples: 198 adult human radii of known age, sex and race available in the bone bank of Department of Anatomy, Government Medical College Aurangabad (Maharastra) were used for the present study. Out of 198 bones 133 were of male and 65 were of female. All the bones were dry, free of damage or deformity and were fully ossified.

Measurements: Following measurements were taken of radius in millimeters as described below.

2. Antero-Posterior diameter at mid-shaft ( Ams ): Holding the Radius bone in anatomical position the A-P diameter was measured at mid-shaft point.

A t-test was applied to compare the mean values of the measurements among the two sexes. t-value shows the relative importance of sex difference between the two sexes. A step-wise multivariate discriminant analysis was carried out to produce a linear function to compare the measurements of radius bone in a way to best separate the two sexes using SPSS 12.0. One sample Kolmogorov- Smirnov test was applied to all the six measurements in each sex to test for normality assumption. None of the measurement deviated from the assumption of normal distribution. Box’s M was calculated and found that the covariance matrices for males and females were not significantly different (Box’s M= 0.088, p= 0.767) Log determinant were 3.11 and 2.96 respectively. Multi-collinearity was not statistically significant. The Wilk’s lamda and correctly classified percentages were calculated. Wilk’s lambda is the ratio of within group sum of squares to total sum of squares. Value close to zero implies high predictability of membership. A statistical significance level of 0.05 was used.

We studied 198 bones of which 133 (67.2%) were of male while rest 65 (32.8%) were female bones. Table 1 shows mean values of different measurements of the bones. All the measurements were significantly larger among males than the females (p<0.001). Highest relative significance was shown by antero-posterior diameter at mid-shaft (t= 12.5).

Table 2: Discriminant functions for different measurements of radius for the discrimination of sex.

Where D is the discriminant score. The group centroids for males and females were 0.751 and -1.557 respectively with cutting point (-0.00011). This could correctly classify 89.9% of the bones with eginevalue of 1.166 and canonical correlation of 0.734. Sex wise plot of discriminant scores is shown in figure 1. The equation had least wilk’s lamda indicating best fit. 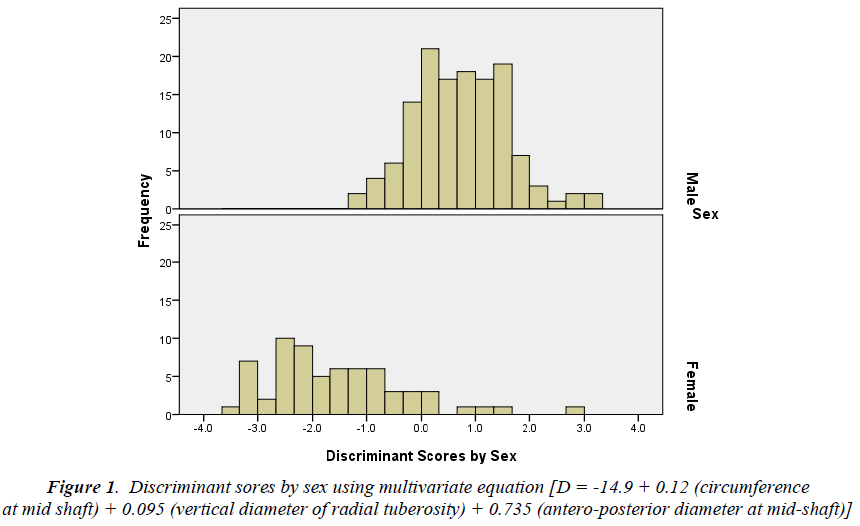 showed the validity of the skeletal remains for detection of sex [1]. The former studies were generally on the pelvic and cranial elements as these bones have considerable variance in males and females. This variance is largely applied in the anthropometry, bioarcheology and forensic sciences for determination of sex. The pelvic and cranial bones get decomposed earlier than that of the long bones, so we can not depend on them [5]. Recently it has been proven that the long bone circumferences can determine the sex of skeletal remains in the absence of pelvis and cranium [3]. The long bones have an added advantage that their measurements can be easily defined, epiphyseal and diaphyseal diameters of these bones show significant difference in the males and females [3,4,6]. Even in the fragmentary long bones there are certain landmarks which have proven their efficacy for analysis of sex, such as circumference at nutrient foramen of tibia [7,8], mid-shaft circumference of femur [9], distal end of fibula [10], circumference of humeral head [3], circumference at radial tuberosity [3,4] etc. Mall [11]) has worked on radius using its length, head diameter and distal radial width with these parameters he could identify the sex in 90% of the radii correctly [11,12,13].

The linear function best classifying males and females was as follows:

Where D is the discriminant score. With this linear function we could determine sex in 89. 9% radii correctly. This indicates that a set of variables ( Cms, Vrt and Ams) tends to be better for sex diagnosis than single variable. Former studies have also shown that with combination of variables, the long bones have as strong a discriminating power as do the pelvis or cranium have [1,3,4].

From above discussion we can conclude that by doing the discrininant function analysis the sex of an unknown individual can be detected in case of non availability of the skull, pelvis or sacrum which are the bones of choice for sex determination. This could be of immense help to detect the sex of an unknown subject in the medico-legal cases, which is an important task for forensic science, anthropology and anatomy.