Determination of effective radium content and uranium concentrations for the soap and the detergent powder samples in Iraq.

Soaps and detergents can be defined as cleaning agents that have the ability to react with water to remove the foreign particle from solid surfaces [1]. Soaps were made from many different sources such as; oils, animal fats, and plants, while detergents from was from oils (hydrocarbon compounds of petroleum or coal). From a chemistry viewpoint, soaps are salts of sodium or potassium with high fatty acids like stearic, palmitic and oleic acids which can either be saturated or not. They include a long chain of hydrocarbon with around 10-20 carbon and one carboxylic acid functional group [2]. Naturally, all minerals and raw substances include radionuclides. From radiation protection perspective, the focus directed toward the radionuclides presented in the 238U and 232Th decay series. Most activities of human that involve minerals and raw substances, the levels of exposure to these radionuclides are not markedly greater than that of background levels and are not of high concern to radiation protection [3]. However, certain human activities may be results in an increase in the exposures and need to be controlled by regulations. In this context, materials that are giving rise to the increased radiation exposures are well known by the Naturally Occurring Radioactive Material (NORM). NORM is an acronym for the Naturally Occurring Radioactive Material, which includes all radioactive elements, existed in the environment. Long-lived radioactive elements include uranium, thorium and potassium and any of their decay products, such as radium and radon [4-6]. These elements have been existed in the Earth's crust, atmosphere and specifically concentrated at certain places such as uranium ore bodies. Radium and uranium may be taken up by different cleaning materials such as soap and powder detergent, which usually used by people beings, Therefore it was decided to estimate the radium and uranium content in the samples that collected from the local market. Pediatric age groups such as Infants and children are the population most in danger for adverse health effects from recurrent exposure to 226Ra and 238U in soap and detergent powder. Due to their weight and developing systems, infants and children are exposed to higher doses. Their growing bodies absorb additional contamination and might sustain permanent injury if exposures occur throughout crucial growth stages. Therefore, pregnant and nursing women, women WHO could become pregnant, infants and tiny children are sensitive populations that ought to avoid intense giant quantities for an extended amount of your time. The calculable health risks from exposure to low levels of 226Ra and 238U are little, and short term exposures cause solely very little risks. See your health care supplier concerning your specific health issues. The radioactivity measurements in the cleaning materials have been studied by very few researchers. To illustrate, in 2002 Hana [7], studied Radium-226, Uranium-238 concentrations and Radon-222 in certain samples of teeth paste which are available in the Iraqi local markets using CR-39 plastic nuclear track detector. In this research, it was found that the ranges of each of Radon-222, Radium-226 and uranium-238 concentrations were (0.094-0.429 Bq/kg), (0.103- 0.471 Bq/ Kg) and (7.5-34.5 ppb) respectively. In 2014, Abojassim et al [8], investigated the radon concentrations in various teeth pastes samples which are available in Iraqi markets, using CR-39 plastic nuclear track detectors when it was found that the concentrations radon, radium and uranium (in ten samples) were ranged from 6.03 ± 0.70 to 101.08 ± 7.44 Bq/m, 0.08 ± 0.009 to 1.416 ± 0.104 Bq/Kg and 2.962 ± 0.345 to 49.620 ± 3.653 PPb respectively. The aim of this study is to estimate the radium and uranium levels at different types of soaps and powder detergents which used are available in Iraqi markets using LR-115 Type II.

Fourteen types of cleaning materials (domestic and foreign) were collected from Iraqi market of Iraq, as shown in Table 1.

Fourteen pieces of LR-115 Type II track detectors were attached at the top end of a plastic cup (radius 4cm and higher 7 cm) were to identify radium level, LR- 115 Type II track detectors were treated with chemical composition of C6-H8O8-N2 and size (1 × 1) cm2 made by the Track Analysis Systems Ltd., Bristol, UK. Uranium concentrations were determined in the fourteen soap and detergent powder samples using the same type of track detectors. The effective radium content and uranium concentrations were measured in the soap and detergent powder samples (10-20 gm) made in different countries. The above samples were dried 100°C for 3 h in an oven to make sure the removal of moisture completely. Dried samples were then crushed and sieved using a 2 mm sieve. The track detectors were attached at the top center of the plastic cup cover using two side tapes. The samples were stored at room temperature for 30 days before the counting aiming to reach the equilibrium state between the uranium and thorium and their respective decay products [9]. LR-115 Type II detector calibration factor was used to determine the concentration of gas which is emanating from a 226Ra with 3.3 kBq as determined by the IAEA in a close system. The LR-115 Type II detectors were then removed and chemically etched in a 2.5 N aqueous NaOH solution using a water bath at 60°C for 1.5 h [10]. Alphaparticle track measurements per cm2 were undertaken using an optical microscope (NOVEL, China) of 40x magnification power with USB 2.0 Camera Application V. 2.3 software. The track density was determined by using the following this equation [10]:

Where, ρ=Average of total track density for a sample (track/cm2) and α=Area of field view.

The effective radium content of the solid samples were calculated using this equation [11,12]:

Where, where m refers to a mass of sample (kg), A refers to an area of a cross section of the cylindrical can (m2) and h refers to the distance between the detector and the top of the sample (m). ρ represents the counted track density, k is representing the calibration factor of the LR-115 Type II track detector and T represents the effective exposure time.

The uranium concentration in fourteen samples of soap and detergent powder were calculated using a theoretical model that proposed by Islam et al [13] with nuclear track detectors (LR-115 Type II). A value of 1/140 was taken a ratio of the isotopic abundances of 238U and 235U in natural uranium is taken as 1/140. If the soap and detergent powder sample have CU ppm of uranium and a density, ρ, it then follows [14]:

Where NA is the Avogadro's number. The number of alpha particles hitting the detector that is contacted with the sample can be calculated as a function of the average ranged where Rα, the mean alpha particle range, is found to be 48 μm for 4-8 MeV energy range [15]. Then ρt, the track density on the detector surface formed by alphas coming from a layer dr, is given by: 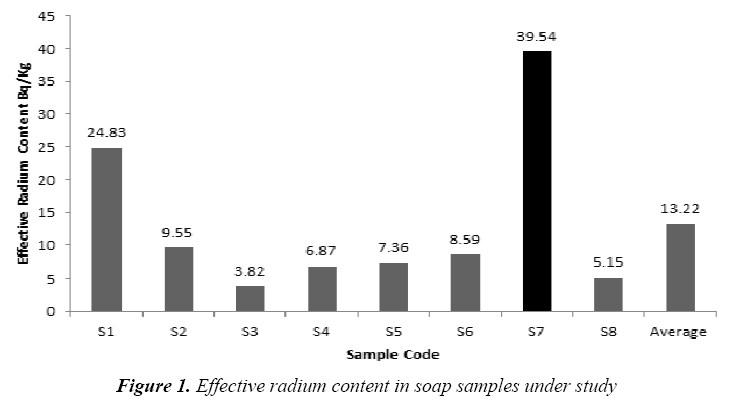 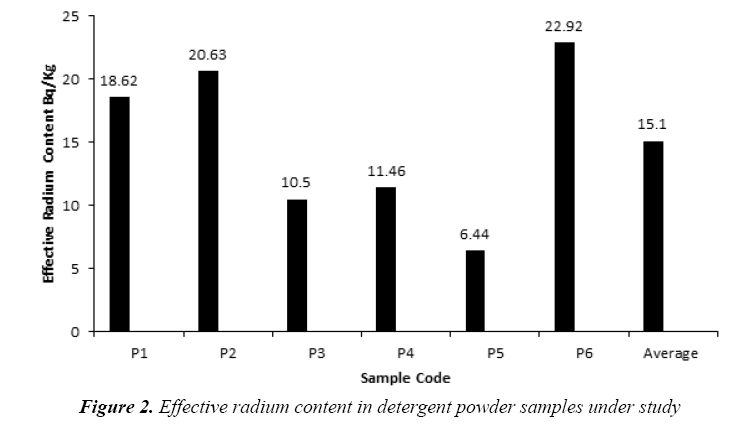 Table 4: Results of Uranium concentrations in soap samples under study 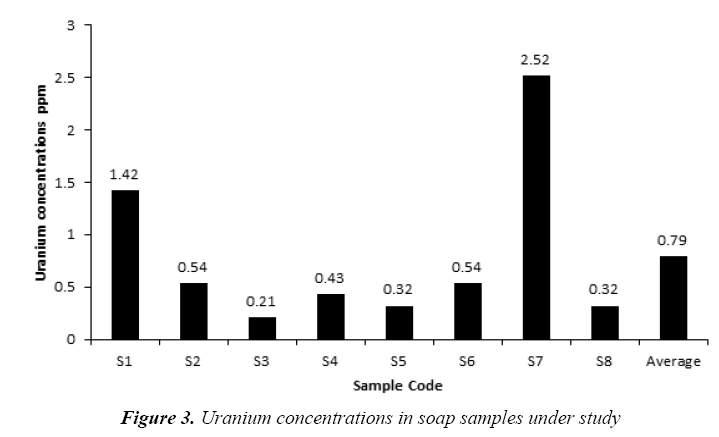 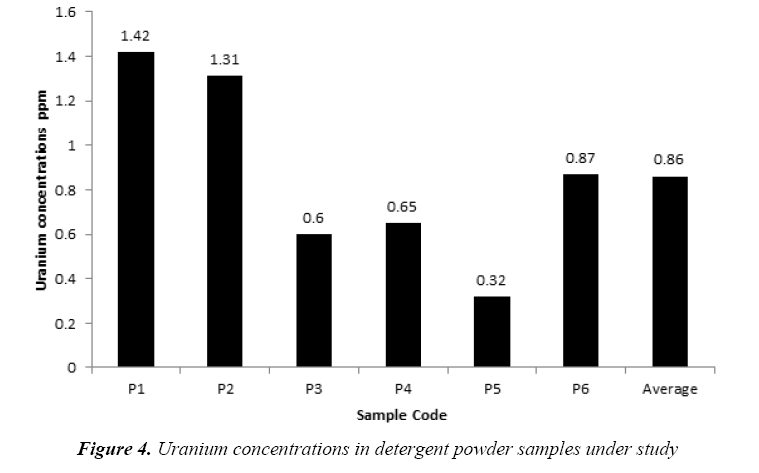 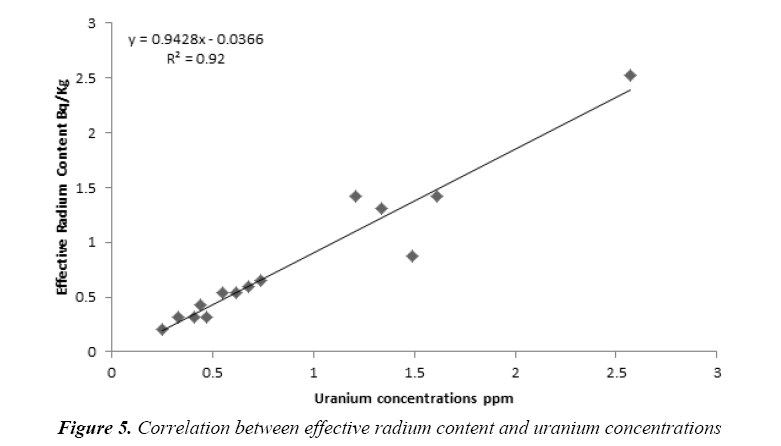 All results obtained in soap and detergent powder samples for effective radium content and uranium concentrations were less than the allowed limits by OECD and UNSCEAR.

I would like to knowledge all those contributed in declaring this issue. Special thanks to the staff of the department of physics at Kufa University.