Occupational exposure to dust is a well-known phenomenon, especially in developing countries. Although sources of air pollutants include power plants, cement factories, refineries and petrochemical industries, the emission of particulates is quite high from quarries [1]. The prevalence of occupational health hazards and mortality has been reported to be unusually high among various workers in India. Occupational lung disease tops the list of major occupational illnesses. Developed countries take more precautions with respect to health of workers, but in developing countries like India, where majority of workers are without proper protection and this aspect is quite neglected [2]. There is a widespread misconception that occupational health is mainly concerned with industries and industrialized countries. But in a country like India, millions of people are engaged in labor like stone grinding, Quarry workers, weaving, etc [3].

In India, quarry workers live below poverty line, without much education, in poor housing environments and without proper medical attention. It was shown that dusts generated from quarries contain 71% silica [4,5]. The occupationally related lung diseases are most likely due to the deposition of dust in the lung and are influenced by the type of dusts, the period of exposure, the concentration and the size of the airborne dust in the breathing zone [6]. In India, particularly in Nellore, where this study has been conducted, quarrying products are increasingly in demand for industrial growth, domestic, agricultural and other purposes. Stone quarrying represents an unorganized sector of industry. The quarrying industries in Nellore employ more than 5000 workers. Since no specific professional training is required and there is high level of unemployment, many laborers work in quarrying inspite of the associated health hazards. To the best of our knowledge, the health implications of continuous exposure to stone dust have not been studied among quarry workers in Nellore, Andhra Pradesh.

Considering the fact that quarry industry has become one of the major employers of labor for many people, we conducted this study to explore the effect of quarry dust on pulmonary function among quarry workers of stone crushing industrial sites in Nellore. We also tried to document the availability of health care facilities and safety measures at the site for minimizing occupational health hazards associated with stone quarrying.

This cross-sectional study was conducted in stone crushing site located on the outskirts of Nellore, Andhra Pradesh, India. Male workers aged 18 to 40 years who had worked at the site for two year or more, were included in the study. Workers with clinical abnormalities of vertebral column and thoracic cage, anemia, diabetes mellitus, hypertension, pulmonary tuberculosis, bronchial asthma, chronic bronchitis, emphysema and other respiratory diseases and subjects who had undergone abdominal or chest surgery were excluded from the study. The quarry workers organized themselves in clusters within the stone crushing industrial site. Five clusters were randomly selected from 10 clusters that made up the site using simple random sampling method. In each of the selected clusters, every member was fully interviewed/investigated. Approval of the protocol for this study was obtained from the Institute Ethics Committee of Narayana Medical College, Nellore. Written informed consent was obtained from all the participants. A total of 75 quarry workers were included in the study. In every subject height in centimeters and weight in kilograms were measured and the instrument automatically calculated body surface area in square meters. Pulmonary functions were assessed by computerized spirometer (Spirowin Version 2.0 of Genesis Medical systems pvt. Ltd) which gives ERS-93 predicted values at BTPS conditions. The test procedure was explained to the subjects and a demonstration of the test procedure was given. The subjects were allowed to sit quietly for 10 minutes to become mentally and physically relaxed prior to testing. Tight clothing and waist belt were loosened. Subjects were asked to inspire as much as possible and hold the sterile mouth piece in the mouth with the lips forming a tight seal around the mouth piece and expire rapidly and forcefully through the mouth piece. After preliminary trials, the test was performed three times and the best recording was taken. The readings for Forced vital capacity (FVC), Forced expiratory volume in the first second (FEV1), Forced expiratory volume percent (FEV1 /FVC%), Peak expiratory flow (PEF), Forced expiratory flow 25-75% (FEF25-75%) were noted. Age matched normal individuals were taken as controls.

The results were presented as Mean ± SD and percentage difference.

The baseline characteristics in controls and quarry workers were comparable with regard to age, height, weight (Table 1).Comparison of lung function parameters in quarry workers and their matched controls is shown in Table 2. All pulmonary function parameters were compared in terms of both mean values of FVC, FEV1, in FEV1/ FVC%, PEFand FEF 25-75% between cases and controls. The mean duration of exposure to dust in sweepers was 5.0 ± 1.93 years (Range 2-10 years).They showed a significant reduction in mean values of FVC, FEV1,FEV1/ FVC%, PEFR, and FEF25-75% in quarry workers when compared with matched controls (Figs.1 to 5).

Table 2: Comparison of pulmonary function tests between cases and controls. 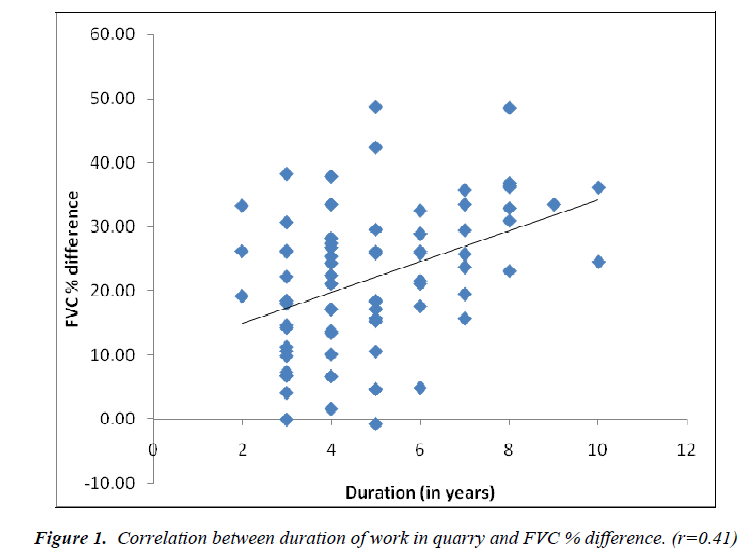 Figure 1: Correlation between duration of work in quarry and FVC % difference (r=0.41). 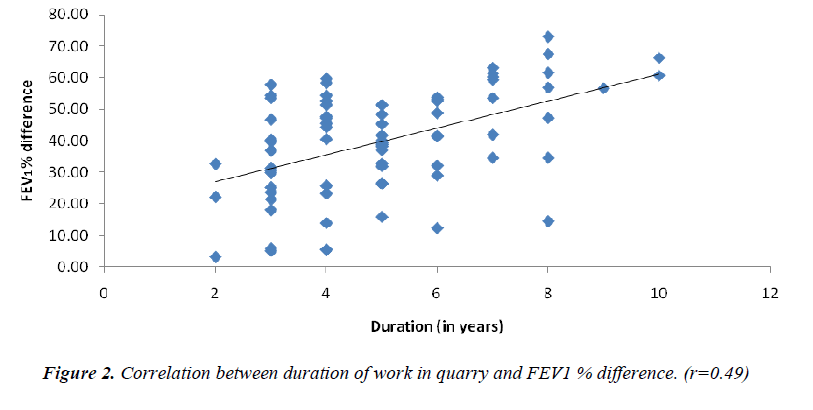 Figure 2: Correlation between duration of work in quarry and FEV1 % difference (r=0.49). 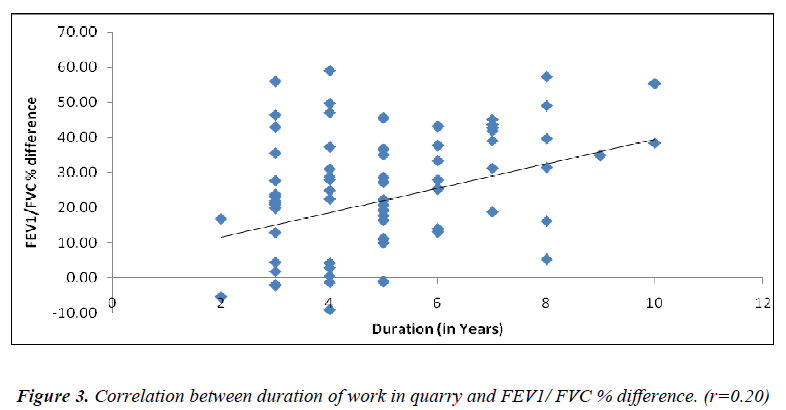 Figure 3: Correlation between duration of work in quarry and FEV1/ FVC % difference (r=0.20). 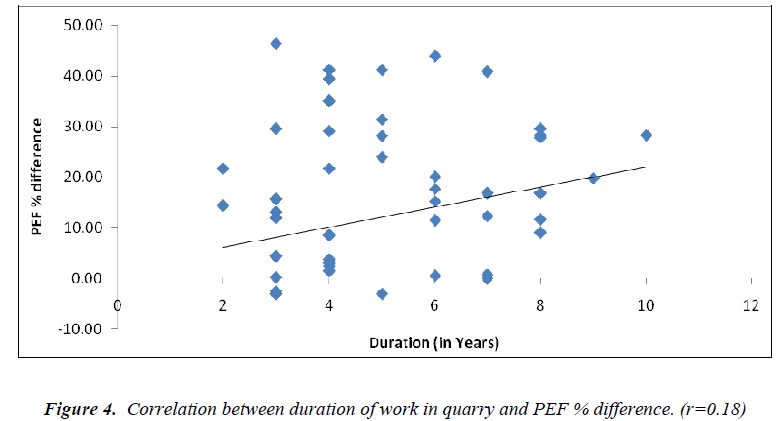 Figure 4: Correlation between duration of work in quarry and PEF % difference (r=0.18). 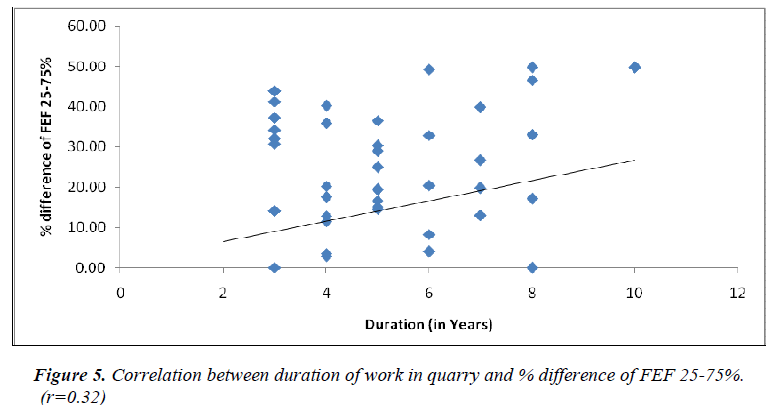 In modern years, there has been growing awareness in the developing countries on occupational health hazards. Usually, the workers work without adequate precautions. To the best of our knowledge, very few studies had been carried out in this region on the effect of stone quarrying work and its duration on pulmonary function health status. In this study, there was no statistical significant difference between cases and controls with regard to age, height, weight and other confounding factors which affect the pulmonary function. FVC is the total volume of air that is exhaled during a forced exhalation [7]. It is reduced in conditions in which there is obstruction to the airways resulting in trapping of air. FEV1 is the volume of air that is exhaled in the first second during FVC maneuver. It is useful to detect generalized airway obstruction. FEV1/FVC% is the volume of air expired in the first second expressed as percentage of FVC. It is a more sensitive indicator of airway obstruction than FVC or FEV1 alone. It is reduced in central as well as peripheral airway obstruction. PEF is the maximum velocity in liters with which air is forced out of the lungs. PEF is influenced to a greater extent by narrowing of large airways. It is decreased in airway obstruction. FEF25-75% is the average flow rate during middle 50% of FVC. It indicates the patency of the small airways [8]. In our study, we observed significant decrease in the mean values of FVC, FEV1, FEV1 /FVC ratio, PEFR, FEF25-75% and positive correlation of % difference of these parameters with the duration of the work in stone quarry workers, as compared to the controls. The parameters, FVC, FEV1 and FEV1/ FVC provide the best method of detecting the presence and severity of airway obstruction or restriction, as well as the overall respiratory impairment. In our study, FEV1 and FEV1/FVC ratio were also decreased, and it was more towards obstructive pulmonary impairment. PEFR values which are especially valuable in the diagnosis of obstruction were also reduced in our study. FEF25-75%, the more sensitive indicator of small airway obstruction was also found to be reduced. All the above findings suggested the obstructive lung function impairments in stone quarry workers.

Workers involved in stone cutting are exposed to silica dust of different concentration and particulate size [9]. Silicosis appears after prolonged exposure to silica dust. Besides, it depends upon a number of other factors such as total dose, duration of exposure, the type of silica inhaled and individual host factors [10]. In general, silica particles that are 2-10 micrometers size impact at points where the air stream changes direction(airway bifurcations) into the surface, because their inertia prevents them from changing directions rapidly (inertial impaction). This phenomenon usually occurs in areas with turbulent air flow. Such areas include nasopharynx, trachea and bronchi up to the first 10-12 airway generation. In more distal areas, smaller silica particles (0.2-2 μm) deposit on the surface by sedimentation. Silica particles less than 0.2μm can contact epithelium as they diffuse in the alveolar gas in the terminal respiratory units [7]. The deposited silica dust causes irritation of respiratory mucosa and hyper secretion of mucus in the large airways, associated with hypertrophy of the sub mucosal glands in the trachea and bronchi. Proteases released from neutrophils stimulate this mucus hyper secretion. There is also a marked increase in goblet cells of small airways leading to excessive mucus production and changes in its chemical composition [7,11]. The associated changes in the viscosity and elasticity of the mucus affect the subsequent clearance of mucus and leads to the formation of mucus plugs in the airway lumen [7]. This causes obstruction to the air flow leading to decrease in the FVC, FEV1, FEV1/FVC%, PEF and FEF25-75%. Silica particles between 0.5 - 3 μm sizes on reaching the alveoli are engulfed by macrophages, which subsequently undergo necrosis. New macrophages engulf the debris and thus a repetitive cycle of phagocytosis and necrosis is set up [10,11]. Some silicaladen macrophages are carried to the respiratory bronchioles, alveoli and interstitial tissue. Some of the silica dust is transported to the sub pleural and interlobar lymphatics and into the regional lymph nodes. The cellular aggregates containing silica become associated with lymphocytes, plasma cells, mast cells and fibroblasts [10].

Crystalline silica, particularly quartz and cristobalite, is much more fibrogenic than amorphous silica, indicating that physical form and surface properties play some role in the pathogenesis of silicosis [12]. Silica is cytotoxic and kills the macrophages which engulf it [10]. The released silica dust activates viable macrophages, with the secretion of macrophage-derived growth factors such as IL-1, which favor fibroblast proliferation and collagen synthesis. The intensity of the fibrosis may be upregulated through the intervention of lymphocytes. Thelper cells activated by IL-1, release IL-2, which is a potent signal for proliferation of T cells. Thus the lymphocyte population is expanded. Their production of macrophage migration inhibition factor, monocyte chemotactins, and gamma interferon would could and activate macrophages at the local site and the amount of fibroblast growth factors. In this manner the collagenous reaction in silicosis is mediated by immunocompetent cells [12].

The maximum expiratory flow is much greater when lungs are filled with a large volume of air than when they are almost empty. In silicosis, because of fibrotic tissue, the lung cannot expand to a normal maximum volume, even with greatest possible expiratory effort; the maximal expiratory flow therefore cannot rise to that of the normal curve [14]. Results obtained in a study conducted on FVC, FEV1, PEF by S.E Urom et al [13] are similar to our study. Another study, conducted by V.B Ghotkar et al [9] on FEV1/FVC%, PEF and FEF25-75% in quarry workers correlate to the results of our study. In our study, the correlation graphs reflect a relation between the duration of exposure to silica dust on FVC, FEV1, FEV1/FVC%, PEF and FEF25-75%. The correlation graphs show positive correlation between duration of exposure and deteriorated pulmonary function.

It may be said that, exposure to dust containing silica in stone quarry workers leads to deterioration of pulmonary function and it is correlated with the duration of the exposure. Protection of the workers may be provided by wet working, suitable ventilation, screening of employees before hiring, providing them with suitable masks and safety glasses. Workers should have information about health risks, suitable working conditions, personal hygiene and preventive measures. They should undergo frequent medical examination .They should receive balanced and sufficient nutrition, exercise, adequate sleep.