Veterinary drugs, when used for food animals, have the potential to generate drug residues in animal products. Antibiotics are introduced in veterinary medicine for more than 40 years ago; TCs are broad spectrum antibacterial drugs active against both aerobic and anaerobic bacteria and some protozoa which are probably still the most frequently used antibiotics in animal husbandry [1] and they are also effective against some pathogenic agents which mostly unaffected by other antibiotics e.g. Rickettsia, Mycoplasma pneumonia, Chlamydia spp. and Legionella spp. [2]. The most common TCs used for animal’s treatment are tetracycline (TC), Oxytetracycline (OTC), Chlortetracycline (CTC) and Doxycycline (DC). In Egypt, TC compounds are the most common antibiotics used in poultry farms (own survey) due to their relatively low cost, easily accessible and readiness availability. As a result of incorrect use of these antibiotics in veterinary practice and especially if the withdrawal times are neglected, residues of these drugs may pose a health threat to consumers [3]. In addition, to immediate adverse effects to exposure of human being to low levels of residues that are still unknown [4].

To ensure human safety, internationally recognized organizations such as World Health Organization (WHO) and Food and Agriculture Organization (FAO) have set a tolerance or Maximum Residue Limits (MRLs) for parent compounds of tetracycline and their epimers in muscle at a level of 200 μg/kg, 600 μg/kg in liver and 1200 μg/kg in kidney [5].

Several analytical procedures are available for determination of TCs residues in animal tissues. Traditionally, antibiotic residues are detected with inhibition tests, mostly agar diffusion tests as Four Plate Test (FPT), but also fast inhibition tests can be used with immunological test as Enzyme-Linked Immunosorbant Assays (ELISA) and Solid-Phase Fluorescence Immunoassays (SPFIA) [6]. However, these screening tests are not always accurate at or below the test threshold and often for drug class but not compound specific. Therefore, efficient methods are needed for determining this residue level in food.

The use of HPLC expanded during 1990, as an efficient separation technique [7]. It is a fast and reliable technique with high sensitivity for the analysis of TCs antibiotics residues (identification, confirmation and quantification), varying its efficiency according to chromatographic condition and type of detector used [8].

One hundred and sixty fresh slaughtered broiler poultry carcass samples each of breast muscle, thigh muscle, liver and kidney samples were randomly collected in a frozen state in colorless and labeled bags from different shops at Kafrelsheikh city during the period from July 2009 until August 2010. Samples were transferred to the laboratory and from each collected carcass; four sub-samples (breast muscle, thigh muscle, liver and kidney) were taken and examined for the presence of TCs antibiotic residues including OTC and TC.

• Oxytetracycline hydrochloride was obtained from Sigma

• Tetracycline hydrochloride was obtained from Nacalaitesque

All solvents and chemicals used for HPLC analysis were HPLC grade.

• Injection volume: 20 μL of both working standard solution and samples.

Extraction of TCs (OTC and TC) from chicken tissues

The technique used was according to that recommended by Oka et al. [10].

Stock standard solution (1000 μg/mL): One mg of tetracycline hydrochloride was weighted in volumetric flask, diluted with methanol to reach a concentration of 1000 μg/ml and stored at -20°C. Fresh solutions were prepared every 6 months.

First working solution (100 μg/mL): Ten mL of the 1000 μg/mL stock standard solution were pipetted into a 100 mL volumetric flask and diluted with methanol and stored at -20°C. Fresh solution was prepared every month.

Second working solution (10 μg/mL): One ml of the 100 μg/mL stock standard solution was transferred into a 10 mL volumetric flask and diluted to volume with methanol and stored for 1 week at -20°C.

Determination of the sensitivity of HPLC towards TCs antibiotic

In order to detect the efficiency of the extraction procedure of tetracyclines in chicken tissues, Random samples collected from Japanese markets were used for recovery tests were. All samples were subjected to analyses by HPLC to detect the free TCs samples. Free chicken samples were spiked with different concentrations (2.0, 1.0, 0.2 and 0.1 μg/g) of both OTC and TC (3 samples each) considering the MRL of 0.2, 0.6 and 1.2 μg/g for meat, liver and kidney, respectively [5].

Spiked samples were allowed to stand at 4°C for 12 h after standard addition of TCs and then mixed prior to work up [11].

The percent of recovery for each spiked sample was measured using the following relation:

The data was determined using linear regression from Microsoft excel that uses the following equation:

The obtained data were subjected to analysis of variance for one way ANOVA test according to [12]. Treatment means were compared by Duncan’s Multiple Rang Test [13].

*The percentages were calculated according to the number of positive samples (WHO/FAO, 2010).

The most common activities of residues regulating programmers is to control the presence of TCs veterinary drug residues in edible parts of chicken because the massive use of this group of antibiotics by veterinarian for treatment and for preventive measures in chicken farms due to their relatively low cost and easily accessible. Therefore, this study was carried out to determine the incidence level of TCs residues in edible chicken parts.

Figure 1 showed that the UV absorption values of both TCs (OTC and TC) were higher at 268 nm, more interference and non-specific absorption was obtained at this wave length. So, wavelength at 360 nm was fixed for residues analysis without any unwanted peak in its retention time. In addition, (Figure 2) showed that OTC and TC were separated from tissue matrix with good resolution and separation of both TCS and the peak shapes were obtained at flow rate of 1 mL/min. 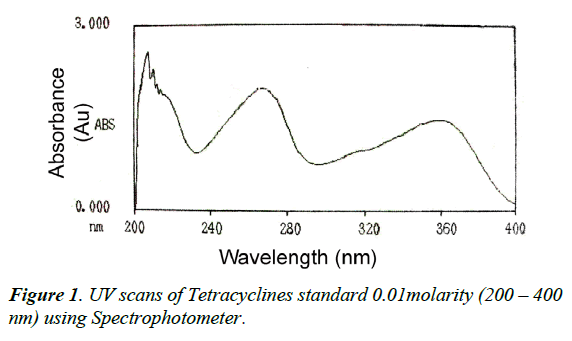 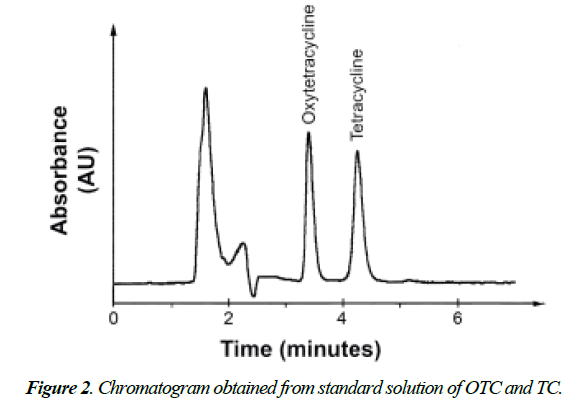 Figure 2. Chromatogram obtained from standard solution of OTC and TC.

There are agreement with the method developed by Biswas et al. [14] as they use the same mobile phase but with relatively low pH=1.6 and low flow rate 0.6 mL/min using an Rp-C8 phenomenex column at 35°C room temperature at 355 nm. They found that the tetracyclines compound at high flow rate could not be separated from the matrix interference due to reduce sensitivity of column. On the other hand, a mobile phase containing oxalic acid avoid forming chelate complex on RPcolumns and interact with silanols and avoid also tail peaking with good separation for tetracyclines [10,15,16].

Moreover, to insure validation of analytical method and verify the absence of potential interfering substances around the retention time of both OTC and TC compounds, a number of blank and spiked chicken meat samples were analyzed in order to assess the specificity of the method. The results showed that, no interference was observed in the region where OTC and TC were eluted as shown in Figures 3-5. 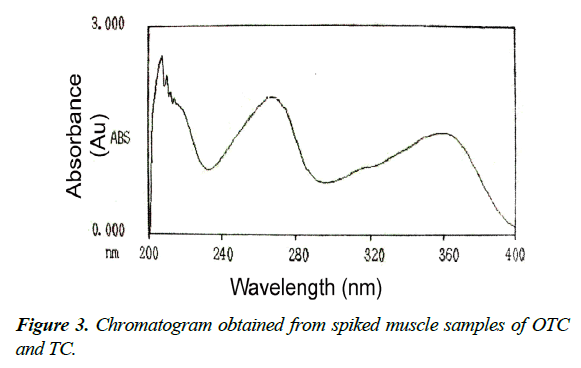 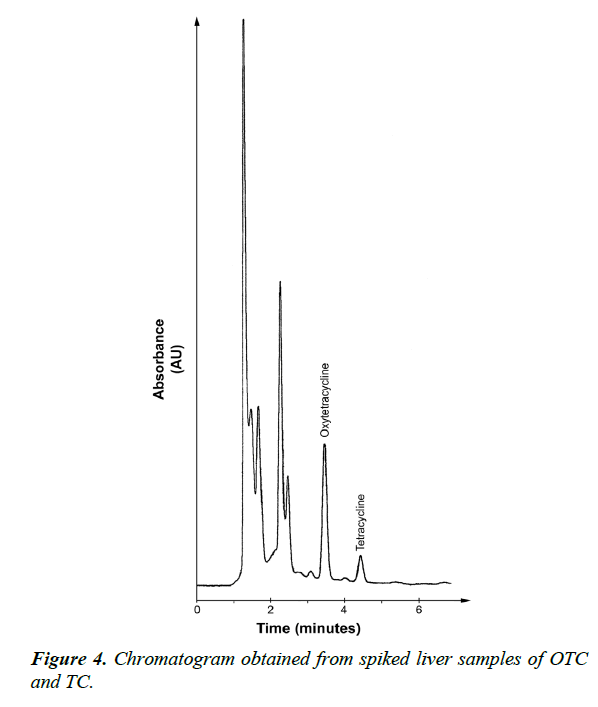 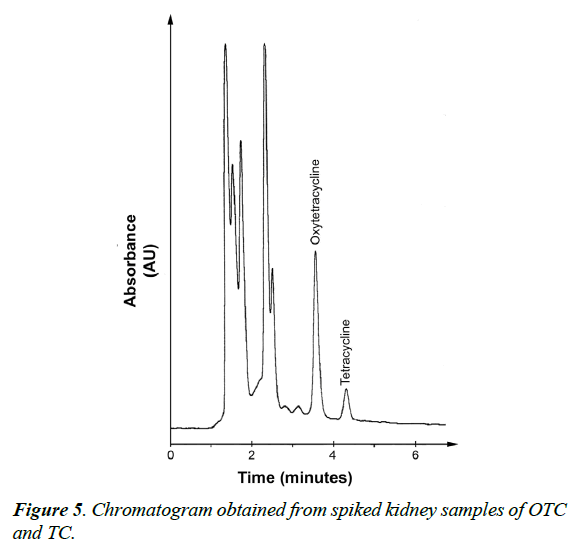 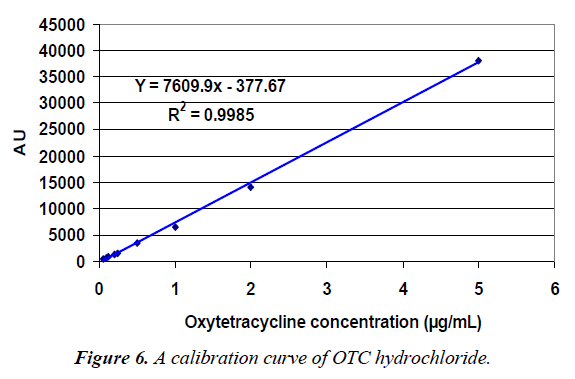 A recovery from 50% to 80% for tetracyclines and their epimers from spiked chicken muscle samples with the same mobile phase recorded by Gajda and Posyniak [16] while, higher recovery percentage (more than 91%) was recorded [3].

Incidence of Tetracycline’s veterinary drug residues in the examined samples

Our findings proved that OTC percent was higher in liver and kidney samples than breast and thigh muscle samples. The results were not unusual since the liver and the kidney are the major storage and excretory organs for tetracycline’s [2] and due to general increases in the abuse of OTC antibiotic drugs in some farms where withdrawal period is not observed before slaughtering of the chicken. Moreover, Prescott and Baggot [17] stated that tetracyclines were undergo extensive entrohepatic circulation which lead to prolongation of their elimination halflifes; thus persisting in the body for long time after cessation of drug administration. Long withholding periods for oral administration of tetracyclines (up to 21 days depending on indication and type of drug) have been recommended in the USA [18].

Nearly similar results was recorded [3] who examined 100 chicken samples and found that 57.1% of the muscles were positive for OTC residues while they found lower concentrations, 23.1% and 66.7% in liver and kidney samples respectively.

Incidence of TC residues in the examined samples

The residual concentrations of TC were detected in 8(5%) of breast muscle in quantities ranged from 0.13 to 0.80 μg/g and a mean value of 0.3905 ± 0.2633. Four (50%) of the examined samples showed residues above the MRL (Tables 6 and 7). The wide variation in the quantities of residues detected in the examined breast muscle samples may be due to differences in the route of the drug administration for treatment purposes and/ or through drinking water or by addition to the animal feed as growth promoters and these indicates differences in animal husbandry practices from different farms.

In case of liver samples the residual concentrations was detected in 21 (13.1%) with a concentration ranged from 0.13 to 0.26 μg/g and a mean value 0.1734 ± 0.0327. Moreover, the residual concentration level was detected in 8 (5%) of the examined kidney samples in quantities ranged from 0.14 to 0.32 μg/g, and a mean value of 0.2107 ± 0.0811. None of the examined liver and kidney samples had residues of TC drug above the MRL (Tables 6 and 7). In spite of, tetracycline residues were detected with a high percentage in the liver samples than in the kidney samples. This could suggest that, these samples were taken at the time when drug were metabolized in the liver not yet at the stage of clearance by the kidney. Therefore, antibiotics were most often administered close to the time of slaughter.

Similar results was reported by Abdulsalam et al. [19] who recorded that tetracycline residues were found more in cattle liver (44%) than its kidney samples (12%). Muriuki et al. [20] found that the percentage of TC residues in chicken samples were 24%, 14% and 7.6% in liver, kidney and muscle samples, respectively.

The authors thank the Egyptian Ministry of Higher Education who funded the student to complete her research work at the United Graduate School of Drug Discovery and Medical Information Sciences in Japan and offer their thanks to Dr. Kitada who supervised the student during her stay in his lab in Japan.