Background: Neonatal respiratory distress syndrome (RDS) is a common serious disease in neonatal period and is associated with neonatal complications and death.

Patient and Methods: A prospective case-control study was done on 50 neonates who incubated in neonatal intensive care unit (NICU) of Tanta University Hospital suffering from RDS (patient group) and 50 healthy neonates (control group). Estimation of serum zinc was prepared for all newborn in this study within the first 4 hours after delivery and proceeding to any nutrition or therapies.

Conclusion: RDS neonates were associated with declined serum zinc levels but more researches with higher number of neonates are needed to establish and document these results.

The relative haemodynamic stability present in paediatric population despite of significant underlying pathology.

Gaining awareness of the likely possibility of a similar diagnosis in a child not improving despite of simple measures.

Although a large proportion of fever in children is viral in aetiology, being aware of the appropriate time frame to refer to paediatric facilities to reduce morbidity and morbidity.

Neonatal RDS also termed as hyaline membrane disease, is one of the most prevalent causes of neonatal complications and death, it is caused by immaturity of the neonatal lung as most of the cases of RDS are preterm babies who delivered before complete maturation of the fetal lung and the main cause of RDS is due to surfactant deficiency in neonatal lung which is responsible for decrease the surface tension of lung fluid helping expansion and inflation of the lung during inspiration and prevent the alveolar collapse during expiration. European guidelines on the management of RDS recommend to start positive continuous pressure through the airways and delivered through the nose (NCPAP) from birth in addition to early delivery of artificial surfactant , in spite of this early treatment, neonatal RDS still causing neonatal complications and death attracting our attention for researches to found more therapeutic modalities or adjuvant therapies to help decrease the neonatal complications and death which occur due to neonatal RDS and the need for early diagnosis of this disease which will lead to early treatment with better prognosis [1,2].

RDS is mainly found in preterm neonates, the risk of RDS increased with declining of gestational age, however RDS may occur in full term neonates. RDS is manifested by increased the respiratory rate (tachypnea), increased negativity of intrathoracic pressure (retraction), forced expiration against partially closed epiglottis (grunting) and bluish discoloration of skin and mucous membrane(cyanosis) and typically worsens over the first 48 to 72 hours, then improves with treatment [3]. Zinc (Zn) is an essential trace mineral involved in growth, CNS development, reproduction, and immune system [4]. Zinc acts as an antioxidant substance through multiple mechanisms [5]. The zinc ion has a role in stabilizing different essential enzymes like copper/zinc superoxide dismutase, resulting in the breakdown and elimination of free radicals which is important in prevention of neonatal lung diseases where the lung is protected from these free radicals [6]. Zinc induces the cysteine-rich zinc-binding protein metallothionein, which serves as an antioxidant protecting the neonatal lung tissues from the harmful effect of oxidants like oxygen free radicals [7].

The primary reasons for zinc deficiency are inadequate dietary intake, impaired absorption or increased physiologic demands [7-9]. Physiological plasma zinc levels has a mean concentration of approximately 14 μmol/l [7,10]. Zinc deficiency is associated with growth affection, impaired nervous system functions, impairment of the function of immune system, systemic inflammation and increased liability to sepsis [8,9]. The problems of zinc deficiency have been seen to be cured, so the giving of zinc could be used to regain the immune function [10].

The action of zinc which act as antioxidant is important to decline the oxidative damage induced by mechanical ventilation is essential and beneficial in response to inflammatory damage [11]. Zinc help in epithelial formation, shares in the enzymatic functions and help in the repair of tissue destruction, protects the body against sepsis, and decreases the inflammatory action in the respiratory tract, thus, it is possible to find the function of zinc in protecting and management of some neonatal chest diseases like BPD [12].

Preterm neonates are at high risk to have zinc deficiency due to decreased body stores as there is short time for transport of zinc from the mother, increased endogenous losses from premature kidney and decreased the amount of feeding due to feeding problems which is mainly present in preterm neonates. Early detection of zinc insufficiency, through the detection of serum zinc levels, may be necessary to prevent severe squeals in these patients as the zinc is necessary in all of the body functions. The clinical picture of zinc insufficiency mainly in preterm neonates are growth disturbances, skin affection, chronic chest disease and affection of retina. The requirements of zinc for full term infants are about 0.8 mg/day, while in premature newborn may need up to 3 mg/kg per day to have good zinc stores , the serum levels of zinc insufficiency at delivery is below 7.1-8.4 μmol/L [13].

The aim of this study is detection of serum zinc levels in neonates with RDS.

A prospective case-control study was done on 50 neonates incubated in NICU of Tanta University Hospital suffering from respiratory distress which was diagnosed as RDS (patient group) and 50 healthy neonates with matched gestational age and sex (control group) who were examined routinely after delivery and did not suffer from RDS. The study was carried out from September 2016 to February 2018. The patient group consisting of 50 preterm with RDS (based on clinical and radiological diagnosis of RDS in the form of presence of manifestation of respiratory distress according to the criteria of Downs’ score combined with chest X-Ray findings which include multiple diffuse mainly fine granular densities (Grade I), air bronchograms which was caused by the collapse of some alveoli (Grade II), the characteristic ground-glass appearance (Grade III) or white lungs caused by diffuse bilateral alveolar collapse (Grade IV). The patient group was classified clinically according to the degree of respiratory distress where grade 1 was tachypnea only, grade 2 was tachypnea and retraction, grade 3 is tachypnea, retraction and grunting and lastly grade 4 is tachypnea, retraction, grunting and cyanosis [14,15].

Inclusion criteria: Neonates suffering from RDS whatever its grade, estimation of serum zinc was prepared for all newborn in this study within the first 4 hours after delivery and preceding to any nutrition or therapies.

Exclusion criteria: Neonatal sepsis, diseases of the respiratory diseases other than RDS, cardiovascular diseases, or central nervous system diseases, mothers who had zinc deficiency, mothers who had taken zinc supplementation. This study was approved by the Ethics Committee of the Faculty of Medicine, Tanta University. Written informed consent was signed from the parents of all neonates.

1 cc of blood was taken from the studied neonates, within the first 4 hours after birth and preceding to any nutrition or therapies, on EDTA tubes and had been centrifuged at 3500 rpm for quarter of hour.

Table 1 showed comparative demographic and clinical data of the studied groups which revealed non-significant differences in gestational age, weight, sex and age on admission between the patient and control group (P>0.05) while there was significant difference in Down score between both groups (P=0.001)

Table 1.Comparative demographic and clinical data of the studied groups.

Table 4. Comparison between the serum zinc levels in different grades of RDS in the patient group. 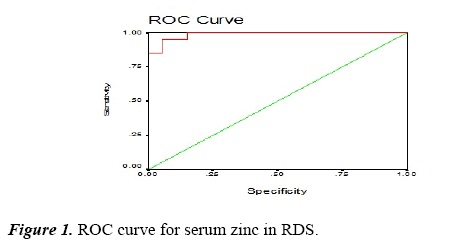 Neonatal RDS is caused by surfactant deficiency which occurs mainly in preterm neonates but may occur in full term or near term neonates and is an important cause of neonatal problems and neonatal deaths. RDS is a respiratory disorder of neonates that appears immediately after birth. It is one of the most significant causes of urgent admission to NICU and main cause of respiratory failure in neonates [17].

In agreement with the results of this study some researches which revealed that preterm neonates who are the most important risk factor of developing RDS are generally documented that there were a negative zinc balance within the first 4 – 8 weeks of life manifesting zinc deficiency, unless intakes by specific supplements [21].

In agreement with the results of this study, there were several researchers who did a hospital-based randomized, placebocontrolled trial in an industrialized country on preterm and VLBW who are the group of neonates at very high risk factors for RDS in them represent evidence support that using higher zinc doses in order to improve survival and reduce morbidity in VLBW neonates [22].

Our study showed that there was a cut-off value of the serum zinc in cases of RDS which was 7 μmol/l, the sensitivity was 98%, the specificity was 94%, the PPV was 95%, the NPV was 97% the accuracy was 96% which indicate that the levels of serum zinc could be used as one of early laboratory investigations that may be indicated in RDS cases and attract our attention to do researches on zinc supplementation to neonates which may suffer or already suffered from RDS. Zinc stores are not completed and its requirement increase in babies born prematurely, in addition to that this early detection may be beneficial to protect the neonates from severe complications of zinc deficiency [23].

Zinc is vital to help the function of the respiratory system and prevent damage of the respiratory diseases like RDS and chronic lung injury like BPD and decrease the damage that results from assisted ventilation and sepsis [24].

In agreement with the results of this study, Negi et al. [26] who observed that increased oxidative stress accompanied by the decrease in the antioxidant defences like zinc and this may play a role in the pathogenesis of a number of inflammatory pulmonary diseases including RDS.

RDS neonates were associated with decreased serum zinc levels, and that the levels of serum zinc could be used as one of early laboratory investigations that may be indicated in RDS cases, but more researches with higher number of neonates are needed to establish and document these results.

Zinc supplementation in RDS neonates especially premature neonates with RDS, the levels of serum zinc could be used as one of early laboratory investigations that may be indicated in RDS cases.