Detection of phage and in-silico analysis of WO phage associated cif genes from Wolbachia: A study based on Drosophila model

Wolbachia are endosymbiotic bacteria infecting the arthropod and nematode population inducing various reproductive manipulations in the host to enhance their transmission. 90% of the arthropod infecting Wolbachia is known to possess a bacteriophage named WO phage. Together the WO phage, Wolbachia and host form a unique tripartite association. Bacteriophages contain mobile genetic elements and play a crucial role in horizontal gene transfer. Also, WO phage is known to assist Wolbachia in inducing Cytoplasmic incompatibility (CI) in the host, as the two cytoplasmic incompatibility factor genes i.e., CifA and CifB are present in the eukaryotic association model of the WO phage. In the present study, we detected the presence of WO phage in Indian Drosophila host from five different eco-geographic locations using the Orf7 gene marker and found their presence to be limited to the Wolbachia infecting host. The multiple sequence alignment of Orf7 gene from two Wolbachia strains reveals a conserved sequence throughout. We also compared the Cif genes across six Wolbachia genomes and found interesting strain-specific variations. These single nucleotide differences in Cif genes can be explored functionally to understand their role in inducing CI. This can also explain the variations in the CI levels across the different Wolbachia strains. The present study is a preliminary work to understand phage distribution and Cif genes across the Indian Wolbachia genomes. Functional validation of the key findings in the study can help in establishing Wolbachia as a robust model for vector borne disease control.

Bacteriophages are the viral particles associated with bacterial genomes. One such bacteriophage the WO Phage, infect the endosymbionts Wolbachia [1]. Phage-Wolbachia-host forms a unique tripartite association wherein phage resides inside the Wolbachia strain which itself is in symbiosis with the host. Literature reports the restricted presence of WO phage in arthropod host and its absence from nematode host, where Wolbachia shares a mutualistic association [2]. Phylogenetic analysis carried out to understand the evolutionary history of WO phage with the Wolbachia host points towards an independent evolution of phage genome from the host genome [1,3,4]. Phage genomes possess the ability to carry out horizontal gene transfer and this ability can be exploited in the use of Wolbachia strains as a biocontrol agent for prevention of vector-borne diseases [5,6].

Studies have linked the presence of WO phage to the various reproductive manipulations exhibited in the arthropod host such as Cytoplasmic Incompatibility (CI) [7]. WO phage carries some signature domains e.g. ankyrin repeats whose role in CI has also been hypothesised [7,8]. CI can be either unidirectional or bidirectional and results from mating of Wolbachia uninfected female with infected male giving rise to unviable progeny, however, the infected female rescues the host from CI by making the progeny viable for both infected and uninfected [9]. CI incompatible crosses results in defects in paternal chromosomal condensation and separation leading to embryonic lethality. Wolbachia is known to be associated with the reproductive tissues of the host but the mature sperm of the infected male lacks Wolbachia and will produce viable progeny only if the egg is uninfected or carries the same Wolbachia strain [10]. However, the detailed underlying mechanism is still not clear [11]. Level of CI and its penetrance is dependent on host- Wolbachia-phage interactions [7]. While wMel strain is reported to show zero to low levels of CI in D. melanogaster, wRi strain shows high CI levels in D. simulans [12]. Also when wMel is transfected into D. simulans high CI levels were observed highlighting the host specific nature of CI. Two Wolbachia genes identified in the eukaryotic association model (WO phage genes encoding proteins having eukaryotic functions) in WO phage were reported for their role in CI [13]. Further, these genes were named as Cif (Cytoplasmic incompatibility factor). The functional role of CifA and CifB in causing CI was elucidated in some studies and contrasting results were observed. While transgenic expression analysis using the Cif homologs of wPip reveal inability of these genes in rescuing CI, the analysis from wMel Cif genes show that CifA alone as well as in association with CifB rescues host from CI, whereas, CifB gene alone was unable to rescue CI [14].

The tripartite association of phage-Wolbachia-host is intriguing and yet remains unexplored. Role of WO phage in cytoplasmic incompatibility which itself is a tool of Wolbachia persistence inside the host is challenging and needs deeper insight. In the present work, we detected the presence of WO phage in five natural populations of Drosophila host and performed a comparative analysis of the Cif genes linked with the eukaryotic association model of phage.

PCR based phage detection and Sanger sequencing across Drosophila host

Identification of CifA and CifB gene across 6 Wolbachia genomes

Four whole genomes of two Wolbachia strains from Drosophila host generated earlier were utilised in the present study [18]. CifA (Gene ID: 29555381) and CifB (Gene ID: 34927827) gene sequences of Wolbachia endosymbiont of D. melanogaster (wMel_Ref) were retrieved from NCBI database. These sequences were blast against four whole genomes of Indian Wolbachia (Table 1) as well as the reference Wolbachia wRi genome and the corresponding sequences in these genomes were extracted. 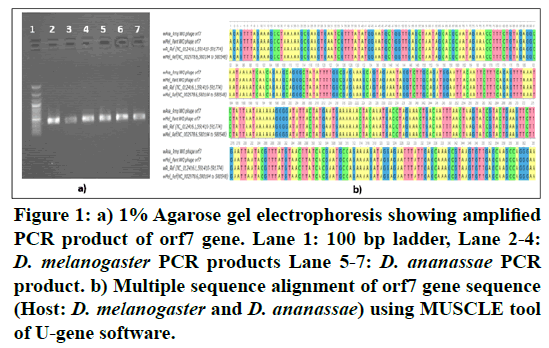 The MUSCLE tool alignment for these four Orf7 genes sequences produced a 365 bp position alignment and revealed a conserved gene sequence throughout the length in Figure 1B. Earlier studies done to understand the dynamics of WO phage with their corresponding Wolbachia host reveal incongruence with respect to Wolbachia phylogeny [3,4,6]. These results highlighted the fact that presence of a specific phage is not linked to the functional effects depicted by Wolbachia in the host. However, this observation raises a fundamental question on the persistence of WO phage in the Wolbachia genomes.

In the present study, we identified CifA and CifB genes in the six Wolbachia genomes using Blast searches. A single copy of both CifA and CifB gene was found to be present in all studied Wolbachia genomes with the exception of wRi_Ref, where these genes were found to be duplicated as seen in Table 1. In all cases, the CifA gene was located upstream of CifB. Literature reports that Cif genes were found to be associated with the eukaryotic association model of prophage [21]. Although, it has been noticed earlier that the presence of phage in Wolbachia genomes may not be an indication of the reproductive phenotypes induced by Wolbachia, but the role of Cif genes in causing Cytoplasmic Incompatibility in the host is recently documented [13,22,23]. The multiple sequence alignment produced a 1425bp position alignment for CifA and 3522bp alignment for CifB gene and reveal strain-specific variations in Figure 2A. GenemarkS tool used for gene prediction revealed the presence of a complete copy CifA protein sequence (474 aa) in all Wolbachia genomes, however, in case of CifB a complete protein sequence (1173 aa) was limited to the wMel strain as seen in Table 1. In case of wRi strains a single site substitution (TC) at 637 positions in the nucleotide sequence resulted in a change of codon from CGA (Arginine) to TGA which is a stop codon in Figure 2B. This SNV (single nucleotide variation) resulted in a truncated protein sequence with two regions predicted in CifB of wRi, each of approximately 200 and 900 amino acids. Similar results were observed in an earlier study for wRi_Ref [22]. This single nucleotide variation may have direct functional implication in the wRi genomes which are even known to rescue the bidirectional Cytoplasmic Incompatibility caused by wMel strain [12,22]. 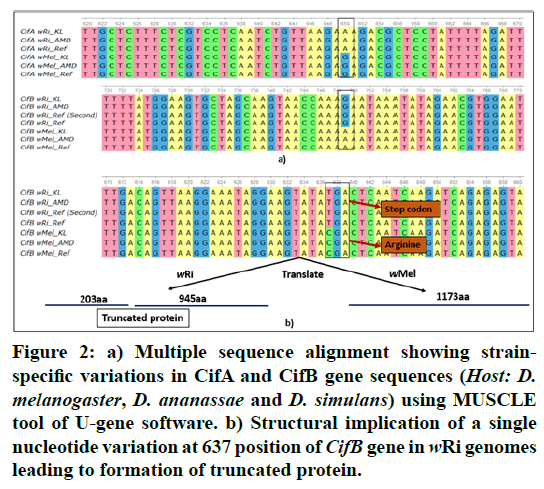 Cif genes have been categorised into four variants i.e., Type I, II, III and IV on the basis of structural analysis [13,22]. As per literature, Type I variants of Cif genes were found in both wMel and wRi genomes and a Type II variant was reported only for wRi_Ref [13,22]. Similarly, in our study, Type I variants were present in both wRi and wMel Indian genomes however, the Type II variant of the Cif genes was not identified in Indian wRi genomes. We subjected our protein sequences to HHpred server for identification of functional domains in the proteins as explained in Table 2. One catalase and apoptosis regulatory domain was predicted in CifA gene, however, due to poor matching scores no significant functions could be assigned for these domains. CifB gene was found to possess a conserved peptidase domain possessing proteolytic activity as seen in Table 2. In case of wRi genomes, the truncated protein sequence 1 of 200 aa was found to possess regulatory domains such as RNA promoter binding domain or transcription factors but due to low matching scores the exact functions of this region could not be stated. The other 900 aa sequence also possess the peptidase domain. An earlier study has also reported the presence of a putative catalase domain in the CifA region and predicted its function in preventing from the damage done by oxidative stress [14]. The role of CifB was derived from a sequence homolog in wPip strain i.e., CidB which has a deubiquitylating capacity and a cysteine protease active site [24]. Transgenic studies to understand the role of these cid genes in yeast and Drosophila model were also carried out. However, the knowledge about these genes is fairly new and needs further experimental validations. The existence of WO phage in 90% of the arthropod infecting Wolbachia and location of Cif genes in the flanking regions of the WO phage raises the possibility of a direct association between these CI inducing genes and WO phage.

The present work raises several interesting questions on the tripartite association of phage-Wolbachia-host. It compels the researchers to think whether the strain-specific variations in Cif genes is responsible for the differences in reproductive manipulation by Wolbachia. Do the non-CI inducing strains possess Cif homologs? In addition, wMel shows weak CI, whereas, wRi shows high CI levels. So if wRi Cif genes are transfected into wMel strain it can be made more virulent for the vector control programme. An understanding of all the significant genes like Ankyrin, type iv secretion system, Cif genes and their functional role can help scientist to create a superstrain of Wolbachia capable of controlling the spread of various arboviral diseases nd malaria, at the same time maintaining its persistence in the host species. Experimental studies designed to bridge this gap can prove to be a boon in making Wolbachia an ideal vector borne disease control agent.