Giardia lamblia, one of the most common intestinal protozoan pathogens worldwide, causes human gastrointestinal diseases. Because of its high prevalence and major impact on the patients’ quality of life, giardiasis has become one of the most important public health problems. We aimed to evaluate the prevalence and assemblages of G. lamblia isolated from referred individuals to the medical laboratories in the center of Kurdistan province, West of Iran. Direct wet mount and formalin-ether sedimentation technique were applied for microscopy determination of Giardia infection in 1383 obtained stool samples. DNA was extracted from positive stool samples and amplified by Nested-PCR using specific primers of G. lamblia Trios phosphate isomerase (TPI) gene. Genotyping and assemblages was determined using sequence analysis of the TPI gene. Based on microscopic examination, out of the 1383 samples, 23 (1.66%) G. lamblia were detected. Genotyping data indicated 12 (52%) cases as assemblage a cluster, and 11 (48%) cases as assemblage B cluster. Molecular analysis in this study reveal that assemblages A and B are the most common types of human giardiasis in Kurdistan province and giardiasis could be a zoonosis disease. Molecular identification of Giardia isolates from animals and control programs is recommended to prevent the spreading of giardiasis in humans.

Historically, Giardia lamblia was a very common causative agent of diarrhea [1]. This organism was first observed by van Leeuwenhoek in 1681 while he checked his own stools under the microscope [2]. About 280 million are currently estimated to be infected with Giardia each year throughout the world [3]. Because of its high prevalence and major impact on the patients’ quality of life, giardiasis has become one of the most important public health problems [4,5]. This neglected disease [6], can be debilitating for healthy individuals and can result in significant morbidity, especially in children [7]. Transmission of G. lamblia generally occurs by fecal-oral transmission through food, drinking water, or recreational water contaminated with feces containing the cysts. There have also been some waterborne outbreaks from water contaminated with feces [1].

G. lamblia complex is found in the intestine and can infect a wide variety of vertebrate hosts. This complex is morphologically similar, but with a genetically different assemblage [8]. Some assemblages of G. lamblia infect a wide range of mammal hosts, whereas others appear to be restricted to groups such as cats or dogs, and some are known to infect only one host species. These assemblages include A, B, C, D, E, F, G, and H. Assemblages A and B isolates are known to infect a broad range of hosts, including humans, livestock, cats, dogs, beavers and guinea pigs. Assemblages C and D infect dogs and cats, while assemblage E infects cattle, sheep, and goats. Furthermore, assemblage F infects only cats, assemblage G infects rats, and assemblage H infects seals. Therefore, only assemblages A and B can infect human and other mammals. While the other assemblages have so far not been detected in humans [9].

Most targeted genes used for characterizing G. lamblia species rely on the analysis of the small subunit ribosomal DNA (SSUrDNA), the Elongation Factor 1 Alpha (ef1a), the triosephosphate isomerase (TPI), and the glutamate dehydrogenase (GDH) genes [10]. Giardiasis is a major problem in Iran [11], as well as in Kurdistan province, west of Iran. There is however, no data currently available concerning the prevalence of different Giardia genotypes in this region. We aimed to assess the prevalence of G. lamblia genotypes (assemblages) in center of Kurdistan province.

In this study, 1383 fecal samples from 1 June 2015 to 30 November 2016 were collected from individuals who had been referred to 14 medical laboratories in center of Kurdistan province. Giardia cyst or trophozoite were identified in samples using direct wet mount and formalin-ether sedimentation technique by microscopic observation (Zeiss, Germany, 40X magnification). The isolates of positive samples were preserved in alcohol and kept at 4°C until used for DNA extraction [12].

Approximately 300 μl of fecal suspension was washed three times with distilled water to remove the trace of alcohol and then genomic DNA was extracted directly from feces using the DNA extraction kit according to the manufacturer’s instructions (YTA, FavorGen, Cat. No YT9032, Taiwan) with the addition of glass milk matrix method and freeze-thaw cycles (10 min). Finally the suspended DNA samples in lyses buffer were frozen in liquid nitrogen and thawed at 90°C in water bath. The extracted DNA was stored in sterilized tubes and frizzed at -20°C until tested for PCR [13].

To identify the assemblages of G. lamblia, nested PCR based on the genetic loci of TPI was used to amplify a fragment (530-605 bp) of the TPI gene using two sets of oligonucleotide primers. A fragment of 605bp was amplified using primers AL3543 [5’-AAATIATGCCTGCTCGTCG-3’] and AL3546 [5’-CAAACCTTITCCGCAAACC-3’] for primary PCR and a fragment of 530 bp was amplified using primer AL3544 [5’- CCCTTCATCGGIGGTAACTT-3’] and AL3545 [5’- GTGGCCACCACICCCGTGCC-3’] for secondary PCR, as originally described by Sulaiman et al. [14]. Primers contained degenerate bases to enable amplification of isolates across all assemblages. The primer sequences were checked for specificity by conducting BLAST searches of the NCBI GenBank database. The primers were synthesized by Bioneer® (Corp., Chungwon, Korea).

Genotyping was performed using sequence analysis on the 23 PCR products of G. lamblia. The secondary PCR products were sequenced using AL3544 primer. Nucleotide sequences were edited manually and the sequence representatives for each of the assemblages identified in the studies were submitted to the GenBank/EMBL/DDBJ database under accession No. of KY359204 to KY359226 (Table 3).

Sequence information was obtained for a representative isolate of each of the Assemblages A and B from the NCBI database. The sequences were aligned using ClustalW2. The resulting sequences were analyzed and compared with similar G. lamblia sequences deposited in GenBank using the Basic Local Alignment Search Tool (BLAST) program. Based on TPI sequences, a dendrogram was constructed using the neighborjoining (NJ) method in MEGA5 software and bootstrap analysis with 1,000 resamplings (Figure 1). 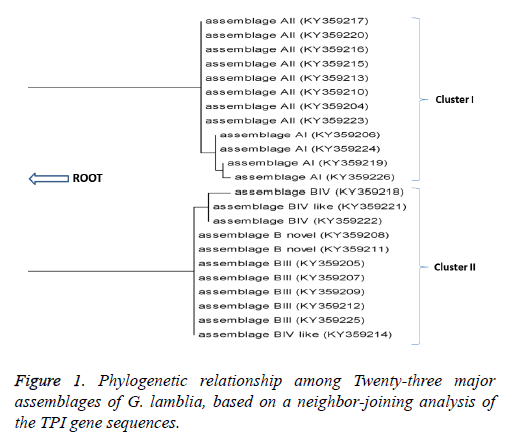 Figure 1: Phylogenetic relationship among Twenty-three major assemblages of G. lamblia, based on a neighbor-joining analysis of the TPI gene sequences.

Of the 1383 stool samples using parasitology methods, the overall frequency of the intestinal parasitic infections was 21.5%. Based on microscopic examination the prevalence of G. lamblia infection was found to be 1.66% (23/1383). Table 1 shows some of the patients’ demographic data such as sex, age, and residential area base on being symptomatic or not. Eleven (48%) infected Giardia patients with gastrointestinal symptoms were children under 12 years of age and 7 (30%) were older).

Table 1. Distribution of Giardia lamblia based on sex, age and location of the referred patients in Kurdistan province, Iran.

Table 2. Frequency of Giardia lamblia genotypes in patients with giardiasis cases based on demographic characteristics.

The DNAs were successfully extracted from all positive samples and the PCR fragments were successfully visualized on gel electrophoresis. The targeted TPI sequence fragment was sequenced in all isolates. After sequencing the forward strand of the positive PCR, their assemblages were determined using the standard nucleotide BLAST algorithm provided by NCBI (http://www.ncbi.nlm.nih.gov/). The genotyping results indicated 12 (52%) isolates as assemblage A (AI and AII) and 11 (48%) as assemblage B (BIII, BIV and B novel) (Table 3).

Table 3. Characterization of Giardia lamblia assemblages detected in humans in Kurdistan, based on sequence analysis.

G. lamblia has been associated with morbidity in animals and humans. It is also recognized as a human foodborne or waterborne pathogen and zoonosis disease [15]. G. lamblia has two major genotypes, which are referred to as “Polish” and “Belgian”, or assemblage A and B, respectively [16]. Current molecular data indicates that G. lamblia is a complex genus grouped into eight main assemblages (A-H ) [9]. So far assemblages C-H have not been detected in humans [17]. Moreover, it has been suggested that the G. lamblia assemblages differ from each other with respect to pathogenicity and clinical presentations [8]. For this reason, using molecular techniques is necessary to determine the assemblages infecting humans and those leading to clinical symptoms. Based on microscopic examination, we found that the prevalence of giardiasis infection was 1.66% (23/1383). This prevalence is close similar to reports from Qazvin [18] and Karaj [19] with a prevalence of 0.85% and 3.8%, respectively. However, high prevalence rates were reported in Kirkuk (10.31%) [20], Shiraz (10.6%) [11], Shahre-Ray (25.8%) [21], and Hamadan (20%) [22].

We identified both assemblages A and B, and an approximately equal distribution between these two in the study population, similar to distributions found Tabriz [23,24], Ahvaz [25] and Saudi Arabia [26]. In contrast, studies in Australia [27], Egypt [28] India [29], Kuala Lumpur [30], UK [31] and Bangladesh [32] showed that infections with assemblage B were more prevalent than infection with assemblage A, whereas this differed from findings in Tehran [13], Fars province [33], and Isfahan [34], where more infections were associated with assemblage A, and only few with assemblage B. The question, whether giardiasis is a zoonosis defined as an animal related disease that is transmissible to humans has been raised in the past [35]. For over twenty years, the World Health Organization has considered Giardia to have zoonotic potential [36]. Moreover, evidence for waterborne or anthroponiotic routes of transmission is still scarce [37]. Recent evidence shows that G. lamblia assemblage A and B are possibly zoonotic. In other words, sub-assemblage AI, AII, BIII, and BIV are potentially zoonotic, whereas sub-assemblage AIII is found exclusively in animals [38]. The predominance of zoonotic giardiasis in humans in Kurdistan is consistent with studies from some developed and developing countries such as New Zealand [39], Eastern England [40] and India [29]. In contrast, the predominance of anthroponiotic giardiasis in humans has been reported from Southern Iran [33], Tehran [13], Shiraz [11], Yemen [41], and Malaysia [30].

Molecular analysis in this study revealed that assemblages A and B are the most common types of human giardiasis in Kurdistan province and giardiasis could be a zoonosis. Molecular identification of Giardia isolates from animals and control programs is recommended to prevent the spreading of giardiasis in humans.