Many networks are available for coruscate secure communication on the wired, wireless, and ad hoc networks. The Central Network Authority Infrastructure (CNAI) is moving towards a new domain of communication such as Wireless Bio Sensor Network (WBSN), perhaps any node communicate with inter or intra region’s nodes, the chance to dissemble the packet, route and medium (source and destination). Moreover, other than wired, wireless networks, the WBSN is full of security challenges. For instance, the vulnerability of attack in the form of black hole and wormhole is causes the packet delivery between the medium of CNAI. These causes bring down the secure communication, to blow up drawbacks of security in WBSN, the attacks deduction and reduction is essential. Therefore this paper proposes a rapid response round trip time mechanism to detect the black hole and wormhole attacks. In addition to this, the path assignment protocol used to reduce those attacks and produce the higher efficiency and throughput with cost-effective.

Due to the advancement of wireless communication and sensor technology, have ensuring the security of the network is extremely important. There are several limitations associated with biosensor networks such as limitation in power, memory, computation capability, and communication rate which makes the wireless biosensor security a real challenging problem. A body biosensor network is a group of wireless sensor nodes used to measure biological parameters which can provide valuable medical information [1]. Presence of malicious node in the WBSN networks that arisen many attacks such as black hole [2] and wormhole attacks. In this paper we propose the Path Assignment Protocol, it communicate and detect the attacks on the each node and forward data packets by using it. Both attacks are vulnerable against an on routing path especially in the Dynamic Source Routing (DSR) [3] or Ad hoc On-Demand Distance Vector (AODV) protocol [4] are generally used protocol for forming the secure route against attack and prevent the discovery [5] of any routes by reducing overhead and improve the scalability and resilience to node. To find the black hole [2,6] and wormhole attack [7] on the WBSN, proposed system consists of three considerations. Firstly, watching the transmission time between the malicious nodes to detect the suspicious node transmission by using rapid response round trip time (R3T2), which is useful to detect the initial stage of the attack detection by comparison of history behind the transmission, whether the process takes the higher time or lower time of node packet delivery with un-suspicious nodes. Secondly, we introduce the Path Assignment Protocol (PAP) for finding the distance [8] between the suspicious nodes, which is useful to count the nodes available between the medium. Thirdly, to reduce both round trip time and new path of the nodes are reduced so attacks are also reduced by based on the threshold based wormhole [7,9] and black hole detection [2,10] in WBSN. An experimental result shows that the proposed method achieves high network performance in terms of throughput and packet delivery ratio and so on.

To design the WBSN as the high transmission delivery time and low communication overhead for secure communication. The rapid response round trip time used to malicious nodes to detect the suspicious node by using the transmission time consideration. To develop the efficient protocol for path detection [10] for the shortest distance for packet delivery [8]. The Path Assignment Protocol used to the find the shortest path between the two nodes. To maintain the accurate detection of the severe attacks such as block hole [7] and wormhole attack [7,9]. The threshold based method used to detect wormhole and black hole attacks.

The request and response time were taken and stores in the past interaction history (The past transaction history) for the future reference, this history of node transmission are used compare the any transmission delivery time with the new time interval between the two distinct source and destination.

The past transaction history contains the node identification number and gateway to interface node and the metric value for the current communication. If the packet sends over the network from two different nodes, the history of the source routing, hop-by-hop routing, and routing metric is stored in past transaction history. If any routing path exists while packet sending over nodes, the packet did not send that route because of the two reasons that firstly, the route is already patterned secondly, the route has some malicious attacker and also gives the delay of intruder, control overhead, packet delivery ratio, energy consumption, queue delay and agent trace of the overall networks. The analysed values are modelled by the following formulae which are used to find the correct route path of any nodes. In addition to that the attackers are finding based on the trust values.

Equations give the general past interaction history it will direct to the find the number of nodes are presented and in the form of attacker.

The analysed values of past interaction history constructed in the Table 1 which is useful to find and combine the number of iteration and number of route in the concern network nodes. This is used to store the previous history of the normal scheme in Wireless Sensor Networks (WSN).

Where threshold (t) is varied from the (0 < t ≤ 1) for choose the t is higher than 0 the delay is low, therefore the black hole attacks [2] are discovered else the delay is high the wormhole attacks are discovered from the mobile ad hoc network. Moreover path assignment protocol is used to find the distance [8] between the suspicious nodes by the route path between them. 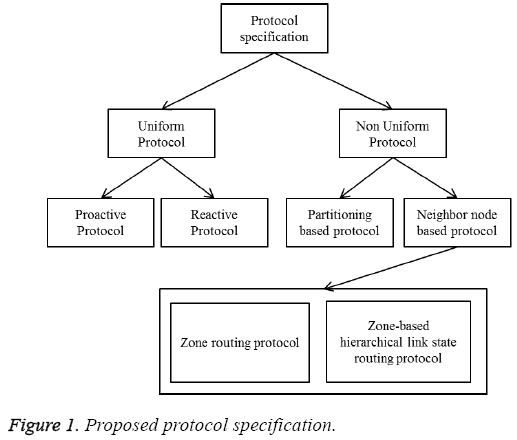 Consider the number of hop in the network zone, all nodes counted as the n1, n2, n3 and so on commonly N. Particularly the routing zone described as routing edge peripheral nodes of N are N’s neighbouring nodes [11] in its routing zone which are exactly d hops away from N this routing called as the Zone routing protocol. We combine this routing protocol with zonebased hierarchical link state by form the zone as hierarchical structure with respect to the neighbourhoods N as node level topology [11] and zone level topology, which is reduce the within multiple overlapping zones in the Zone routing protocol. This non-overlapping zones are formed the location management where reduce the data transmission energy of the cluster-head or location manager when data transmission between the two nodes. To improve the efficiency of the route finding by the reduction of overlapping, sequentially changing of variable size zones, those parameters are used to manage the Zone Routing Protocol (ZRP) with the Zone-Based Hierarchical Link State (ZHLS). This hybrid routing topology path assignment protocol used to find the path distance [8] based on the node ID and the zone ID of the destination is required for routing. The proposed hybrid routing protocols named path assignment protocol has potential to provide higher scalability than pure reactive or proactive protocols for insignificant to reduce the number of retransmission of the nodes applicable to routing. By working together the best or the most suitable nodes can be used to perform route discovery [5]. The nodes within each zone work together to maintain location information about the nodes which are assigned to that region. This is potentially eliminated the warm hole and black hole, by the novelty of hybrid routing protocols of path assignment protocol.

The WBSN environment is formed by using NS2, which consist of wireless nodes with the simulation setting such as simulation area, simulation time and simulation sources. The different types of attack such as black hole, wormhole are detected [9] based on the malicious nodes appear in the simulation setting and affect the same. Our proposed system aim is to show that path assignment protocol performs better than many existing method like SETX, ENCBTS-colluded ABH, AM and so on. Conclusions are drawn for the black hole attack, wormhole attack are reduced by the following network setup. The standard network simulator 2 used for mange and demonstrates dynamic nature of mobile ad hoc [14] networks and the performance evaluation are compared with the various parameters with various protocols by following simulation parameters given in Table 2.

To evaluate the performance of the proposed method, we compared proposed protocol with the standard existing protocols under a wormhole and black hole attack [2,15] on the network. The performance matrix of simulation is based on the mobility speed with respect to the packet delivery ratio, packet loss rate, detection ratio [16] in the simulation scenario are described in the following Figures. 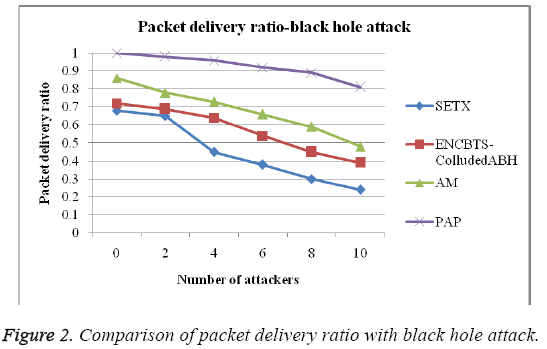 Figure 2 shows that the comparison of packet delivery ratio with black hole attack is calculated and compared by the various numbers of nodes. The sending request is reduced as the proposed protocol increases the packet size of request packets; it reduces the number of request packets more significantly which is shown in the Figure 2. Figure 3 shows that the packet delivery ratio in wormhole attack, the various protocols such as Secure Expected Transmission Count (SETX), ENCBTS-colluded ABH, Arthur-Merlin (AM) and Password Authentication Protocol (PAP) protocols, the proposed path assignment algorithm more accuracy than the other protocol which is shown in the Figure 3. 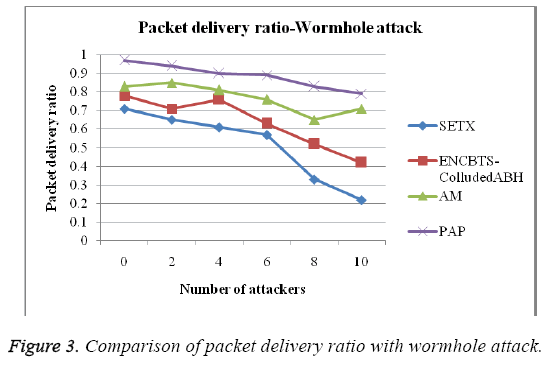 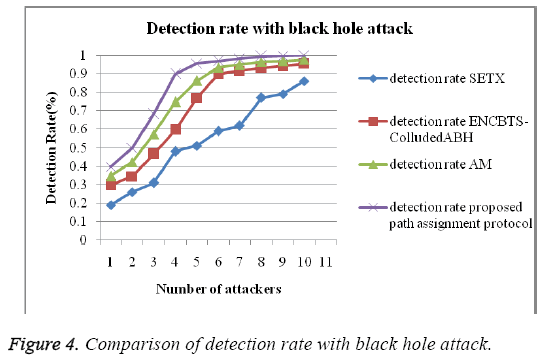 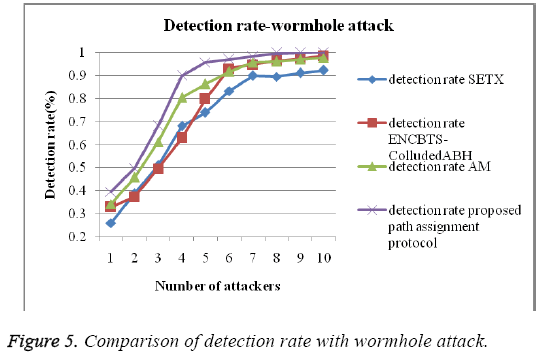 Figure 6 clearly stated that the packet loss ratio various algorithm. The proposed path assignment has 0.098% less loss than the existing system. The comparison of the packet loss is taken from the irrespective random number of reference nodes. 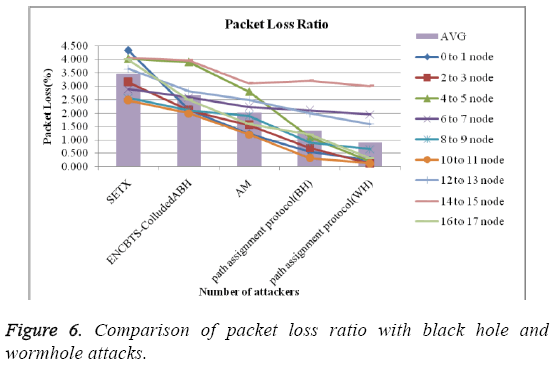 To provide the security to the wireless sensor networks, the proactive and reactive attacks are main challenge of the security concern, to fulfil the this security concern, Our proposed system used to deduce and reduce the wormhole [7,17] and black hole [2] attacks by using the rapid response round trip time and the protocol based path assignment protocol. The attacks on the wireless sensor networks are caused the path between the route, path assignment protocol are managed the route discovery [5,18] and prevent the causes in the same path. Once the tunnel are appeared in between the node are again transmit the packet from the initial state [19]. This was used to make the path as secure and shortest path detection [10]. The proposed system consists of the following stages such as (i) Observe the transmission time between the malicious nodes by using Rapid Response Round Trip Time (R3T2). (ii) The Path Assignment Protocol (PAP) for finding the distance [8] between the suspicious nodes. (iii) Threshold based wormhole [9,20] and black hole detection [2] in WBSN. These three mechanisms are used to prevent the WBSN from the wormhole and black hole attacks.

Due to the attackers in the WBSN, the security is the one of the challenging issuing in data transmission, the rapid response round trip time mechanism and path assignment protocol are proposed to overcome the security challenging and detect the dangerous attacks like black hole and wormhole attack and also improve the security, packet delivery ratio, detection ratio and reduce the packet loss rate, of the mobile nodes, the new proposed algorithm of path assignment protocol and rapid response round trip time mechanism gives efficient and secure method for deducting the attacks like black hole and wormhole attack. In addition to that, nearest neighbour node selection used to discover the minimum short route, finally the transaction histories are stored to past transaction history route table. Each and every node communication history result will recorded for verify previous process. Once the transaction history is exists the packet did not send that route because of the route is already patterned or else the route has some malicious attacker. In the proposed scheme of our experiments make evident of the efficiency with the consideration of several performance metrics like packet delivery ratio, packet loss rate, detection rate ratio and so on.