Rexiline Sheeba I1* and Jayanthy T2

The article brings out an innovative Z shape wearable patch antenna that was designed over textile also the other type of substrates to test its performance over ISM (industrial, scientific, medicine) band of microwave frequencies was discussed. Wearable antenna has the wearable and textile properties bending in 2D, which shows the flexibility for the wearable electronic devices. Since the performance of the antenna is working on ISM band, it is perfectly suitable for biomedical applications. In the proposed antenna silk substrate is chosen for implementation because of its low SAR and is placed on the thyroid gland to detect the cancer cells. The performances of the antenna were varied, when it is placed on the thyroid gland of the human tissue, Tissue properties were considered and analyzed within and without cancer affected areas. Since cancer cells are more water content tissues, the gain and electrical conductivity performance were found changed. While placing the antenna on thyroid gland it is also observed that there is a change in working frequency of the Z-patch silk substrate wearable antenna. The simulated results have been tabulated and measured. The results of the fabricated proposed antenna S11 have been shown by using the network analyzer.

Abnormal large thyroid gland is goiter. Both diffuse and nodular goiters are usually caused by an imbalance in certain hormones. An undifferentiated carcinoma called as anaplastic carcinoma is one among the rare forms of thyroid cancer. Sometimes develop from an existing papillary or follicular cancer. In this case the cancer cells do not look like normal thyroid cells under the microscope. This cancer often spreads quickly into the neck and also to other parts of the body, and is very difficult to treat. A micro strip patch antenna has a combination of wearable properties and textile properties in two dimensions. A planar structure flexible in 2D can bend along two planes, optimized to perform in proximity of human body which is said to be a softwear antenna. Shrestha et al., study “Breast tumor detection by flexible wearable antenna system”, eliminates the need for liquid coupling medium is used in conventional systems, leading to a simpler and cost effective imaging device [1]. This is achieved by proposing a planar micro strip antenna design on a flexible substrate and optimizing the antenna for the skin contact operation. It is shown that systems with a matched coupling medium still have 20% theoretical reflection loss at the skin, which is completely eliminated in the proposed system.

Simulation results show 3-fold increase in the current densities and electric fields in the tumor. Experimental results withinhouse breast and tumor phantoms showed that the received signal from a tumor has 33 dB maximum and 19 dB amplitude above noise level [2]. Pankaj et al. proposed a technique which is comparatively easier and safer than mammography and tomography for the detection of breast cancer. Mammography which is currently the most popular method of breast screening has some limitations, and microwave imaging offers an attractive alternative. In this work a cancer diagnosis model which consists of a micro strip antenna, breast model and tumor are designed in HFSS. This model shows that the tumor present in breast can be detected by observing the change in the distribution of volume current density of breast with tumor and without tumor. The model shows that the maximum current density of breast with tumor is 275.61 (A/m^2) and maximum volume current density of breast in absence of tumor is 109.5 (A/m^2). This particular technique is comparatively easier and safer than mammography and tomography in which the high intensity X-rays are used for detection of breast cancer. The overall idea for this innovative concept is to detect with potential benefits of adequate depth penetration via microwave imaging, while minimizing cumulative side effects to healthy tissue due to ionized radiation. Murali et al. study of “Development of wearable antennas with different cotton textiles” using Micro strip patch antenna is introduced [3].

The scope of the work is to design an innovative softwear antenna which has the combination of soft textile substrate and wearable properties in 2D plane and flexible, said to be a softwear antenna. The placement of this proposed softwear antenna on human thyroid gland with and without cancer cells show a variation in the performance of the antenna. This differentiates the cancer and the normal tissues in the thyroid gland [4]. The skin contact interaction between the antenna and tissue properties were shown in tabulation and different observations were made. Simulated and fabricated measured result was also included in the analysis (Figures 1 and 2). 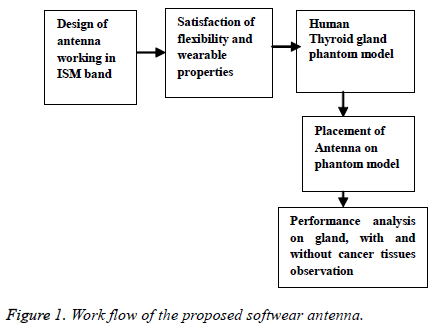 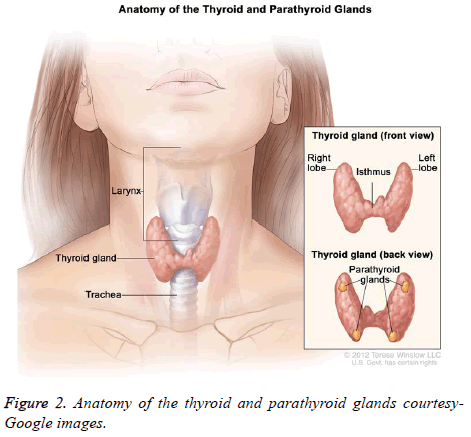 Figure 2: Anatomy of the thyroid and parathyroid glands courtesy-Google images.

Design of Soft Substrate Wearable Antenna and the Work Flow

Table 1 shows the design specification of the proposed softwear antenna using silk as a substrate. The actual length of the patch can be determined by solving for L:

Width leads to radiation efficiency as:

Effective Dielectric constant of the patch antenna is given by:

The extension of the length ΔL is: 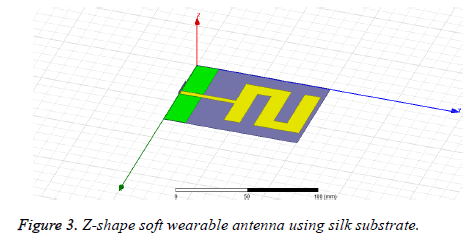 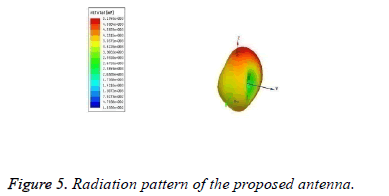 E and H-field pattern, specific absorption rate of the proposed antenna was shown in Figures 6-8 respectively. 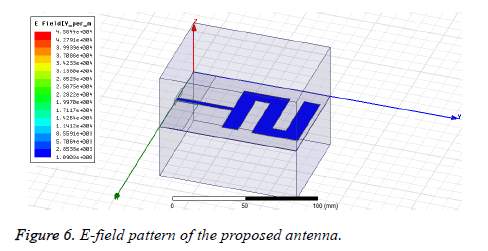 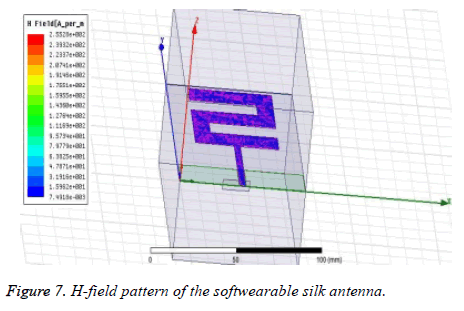 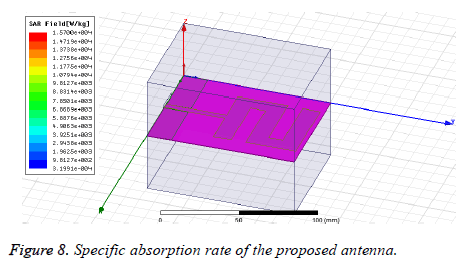 A reduced SAR factor is obtained when silk substrate is used in this proposed antenna.

From Table 2 it was observed that for all the substrates in the proposed antenna achieves a good gain and the frequencies are resonating in the ISM band.

Specific Absorption Rate (SAR) is also reduced when silk substrate is used in the proposed antenna and also other performances like E-field, H-field are also achieved in free space propagation (Figure 9). 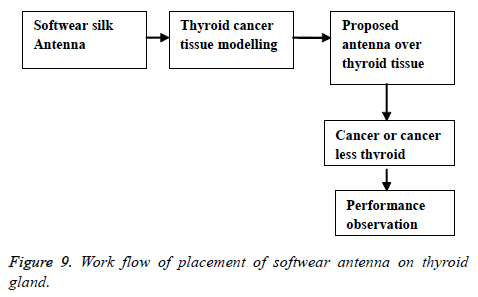 Performance of Antenna on Placement of Thyroid Gland

Performance of antenna on thyroid gland has been performed by high dielectric constant of Lizzy phantom model. The front view and propagation in Z-axis has been shown in Figure 10. And the placement of antenna in side view showed in Figure 11, respectively. 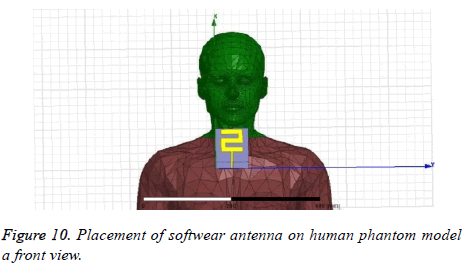 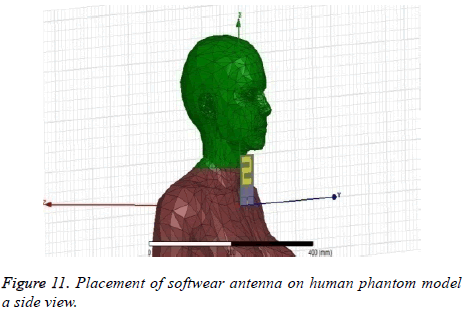 Figure 11: Placement of softwear antenna on human phantom model a side view.

The simulation result of its discrepancy after placing the soft silk substrate wearable patch antenna has been shown in the following figures.

After placing the proposed antenna on human phantom model thyroid gland εr=1.5 variation in performance has been observed. Figures 12 and 13 show the variation in S11, radiation pattern, and Figures 14-16 show E, H-field pattern and a performance change in gain was observed. 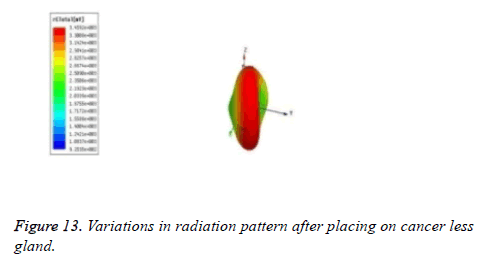 Performance of the Antenna on Placement of Cancer Thyroid Gland

Figures 17-19 show the various performance of variations in S11, Radiation pattern and gain after placing the proposed antenna on cancer thyroid gland εr=4.5. E and H field patterns are shown in Figures 20 and 21. Performance variation is due to the Permittivity of tissues in human body, which has more water content, cancerous tissues having more water content shows the variation in antenna performance, dielectric medium complex value in general given as: 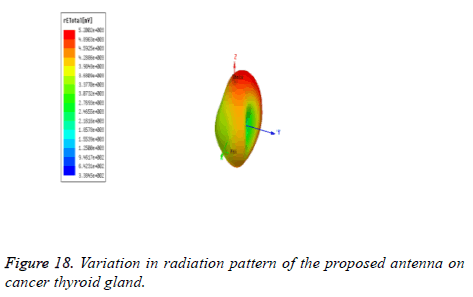 Figure 18: Variation in radiation pattern of the proposed antenna on cancer thyroid gland.

Figure 19: Variation in gain of the proposed antenna on cancer thyroid gland.

Figure 20: Variation in E-field pattern of the proposed antenna on cancer thyroid gland. 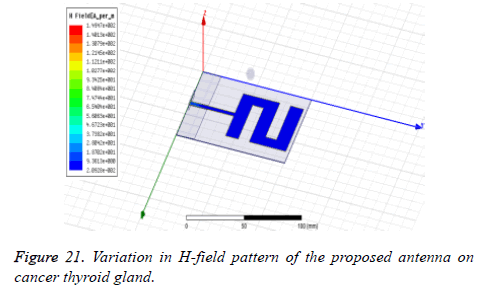 Figure 21: Variation in H-field pattern of the proposed antenna on cancer thyroid gland.

ε ̇ ̇ comprises of conductivity and electrical heating in the medium.

Table 3. Simulation results of the proposed antenna working on free space, on thyroid gland without and with cancer.

Fabricated softwear antenna using silk substrate using network analyzer is shown in Figure 22, which shows the S11 as 2.48 GHz and -17.6 as its return loss which is almost equivalent to the simulated results. 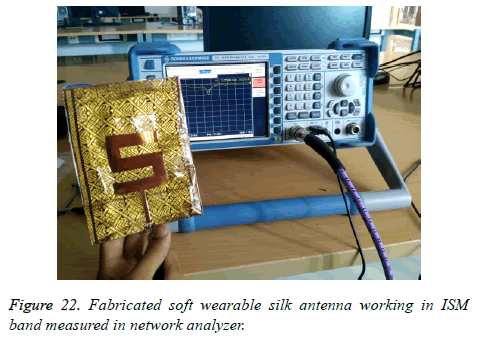 Figure 23 shows the VSWR measurement of the proposed antenna showing 1.28 which is approximately equivalent to its simulated one as 1.36. 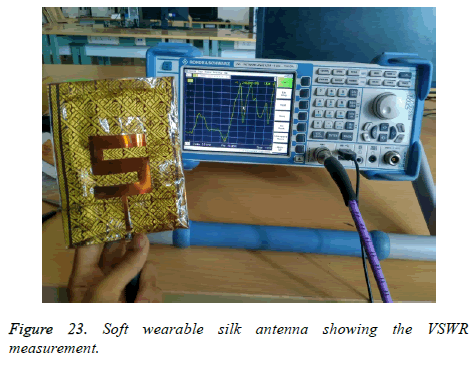 An innovative Z-patch soft wearable silk antenna working in ISM band using four different substrates has been designed and various performances were observed. On Analysis and comparison of the results, silk antenna is used as the substrate, as it has low SAR, when compared to other substrates. Due to its low SAR value and as it is a wearable silk antenna, having wearable and textile properties, the designed antenna can be used in biomedical wearable applications. The designed antenna was placed on human thyroid gland to obtain the performance whether the cancer cells are present or not in the thyroid gland. Different parameters such as E-Field, gain are considered and accordingly the presence or absence of thyroid cancer cells is detected. Due to the presence of high water content cancer cells the observations were made in the performance of the antenna, it is perceptive to observe the changes when it is wear on thyroid gland since the permittivity between cancer and cancer fewer glands varies, the performance of the antenna also changes consequently. Hence by using this proposed antenna on human body and by appraising its results, the presence or absence of thyroid cancer can be detected. The fabricated antenna has been measured using network analyzer, and the simulated and measured results were compared the result shows the simulated S11 and VSWR are approximately equal and working in ISM band is suitable for industrial, scientific and medicine purpose. The Proposed one should be placed on thyroid gland phantom and in real tissues in future to ensure the performance by using the network analyzer.