Deployment of connected and autonomous vehicles by transforming next decade reducing based on IoT.

Connected and Autonomous Vehicles (CAVs) will have a huge effect on our cities and regions in the next ten years, and society will experience profound improvement in the methods of transportation. As fast mobile Internet access is becoming increasingly popular and countless wireless networking technologies are being adopted on the market, new opportunities continue to arise for goods and services, allowing interconnection and Autonomous Vehicles (CAV). CAV can connect and communicate with the surrounding world digitally with the help of the Internet of Things. This involves not only connections to other vehicles (car-to-car), but also infrastructure connections (car-to-infrastructure) and other devices (car-to-device). This functionality therefore gives way to a new range of technologies, such as enhanced safety features, customized experiences for driving and entertainment, and even autonomous driving.

The Internet of Things (IoT) is a new wave of Internet that is expected to transform our lives. Internet has connected people and now it is connecting. Things‘to make seamless communication and intelligence pooling. IoT is a disruptive technology that has tremendous potential to change the world and is changing the way we live. The development and uptake of connected cars solutions in the coming years is driven by an increase in embedded connectivity in cars [1]. In addition, current megatrends on connected devices, energy efficiency, security, and health further drive growth in the segment. Besides this, the uptake can benefit from the realignment of short term milestones with a clear long term vision, from continuous innovation efforts, from the cooperation between different types of actors coming from different industries, and from large scale investments in infrastructure.

The Internet of Things (IoT) is defined as a paradigm in which objects equipped with sensors, actuators, and processors communicate with each other to serve a meaningful purpose. More than 85% of systems are unconnected and do not share data with each other or the cloud. One such technology that facilitates the interconnection is the internet of the things. In the IoT also means making devices smarter, by connecting them online to acquire and process data [2]. Today IoT has touched every corner of the world. Internet of Things is simply an interaction between the physical and digital worlds. The digital world interacts with the physical world using a plethora of sensors and actuators. IoT devices are equipped with sensors, actuators and processors. Figure 1 show us the main platform of IoT, Sensors are used for interacting with the physical environment. The data collected by the sensors have to be stored and processed by the processor [3]. The actuator performs. The desired action depending on the value from the sensor. The storage and processing of data can be performed at that remote server. The pre-processing of data can be done at the sensor level. The communication between the IoT devices is wireless. Sensors, actuators, compute servers, and the communication network forms the core infrastructure of an IoT framework [4]. (Figure 1). 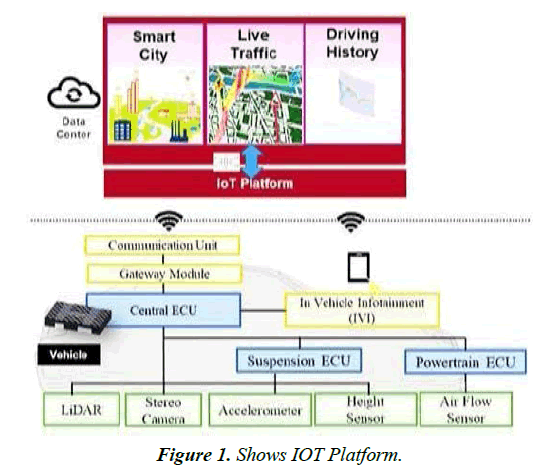 Background on IoT components in connected and autonomous vehicles

The European automotive industry, representing 6.1% of total EU employment and 7% of EU GDP, is facing a digital revolution in the 21st century in the form of the connected and autonomous vehicle (vehicle to everything-which includes vehicle-to-vehicle, vehicle-to-infrastructure, v e h i c l e - t o - network, vehicle-to-cloud, vehicle-to-device and vehicle-topedestrian). With the integration of Internet of Things (IoT) components into vehicles, they become part of a network [5]. Vehicles can communicate with each other, with the surrounding infrastructure and with other drivers. Gradually the technologies of IoT for connected and autonomous vehicles (combined with the evolution of Artificial Intelligence and communication networks) support assisted driving (steering, acceleration and brake support), then conditional automation(the system has longitudinal and lateral control in a specific use case), followed by high automation (the system can cope with all situations automatically in a defined use case) and finally full automation (the system is able to drive the vehicle in all conditions; no driver is required) [6,7]. The autonomous driving is grouped into six different levels by the international Society of Automotive Engineers (SAE) according to the amount of driver intervention and attentiveness required (Figure 2). The human driver does all the driving (Table 1).

Why IoT in connected and autonomous vehicles 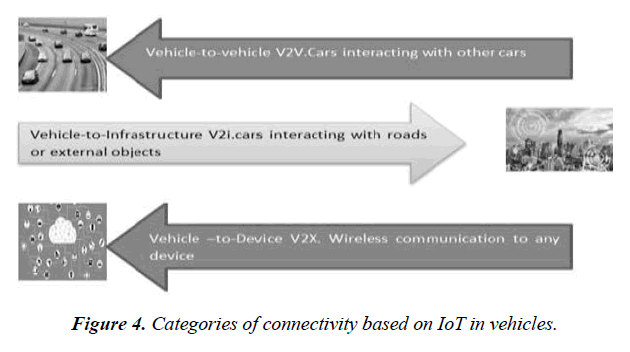 Figure 4: Categories of connectivity based on IoT in vehicles.

The Internet of Things (IoT) refers to the connectivity of multiple devices through the Internet. Driverless cars utilize this connectivity when updating their algorithms based on user data. These autonomous vehicles require an enormous quantity of data collecting and processing. In this case, through IoT, the driverless car shares information about the road (which has already been mapped out). This information includes the actual path, traffic, and how to navigate around any obstacles. All of this data is shared between IoT connected cars and is uploaded wirelessly to a cloud system to be analyzed and put to use improving the automation [14].

The connected cars have multiple communication possibilities to connect to other vehicles (Vehicle-to-Vehicle) or exchange information with the external environments (Vehicle-to-road infrastructure), networks and services (Vehicle to Internet). These interactions provide a promising opportunity to address the increasing transportation issues, such as heavy traffic, congestion, and vehicle safety as figure 1 explain [15].

The Internet of Things (IoT) is rapidly changing how we live. The Internet of Things finds various applications in healthcare, fitness, education, entertainment, social life, energy conservation, environmental monitoring, home automation, and transport systems. This is particularly true of the automobile industry, which is where some of the biggest innovations are being developed and implemented, With the emergence of IoT and Big Data economy, the players of automotive industry need to transform themselves in order to catch up with the new economy era. So with that in mind, here are some of the biggest ways the IoT is transforming the automotive industry and our roads [16].

A definition of a self-driving vehicle is any vehicle with features that allow it to accelerate, brake, and steer with limited or no driver interaction. Depending on who defines how and where the definition comes from, autonomous vehicles are divided into two different types

Semi-autonomous cars can accelerate, brake and steer, keep the distance from the car in front and also keep the lane at speeds up to 130 km/h, but the driver is still required and is still in full control. A fully autonomous vehicle can drive from point A to point B without needing any interaction from the driver. It is expected and believed that this type of car will debut in 2019/ 2020 timeframe. Below we have an example of autonomous car [17].

Connected and automated vechicles on roads and intersections

Technological advancements seen every day in areas like information technology, communication, and data analysis and storage etc.is not exclusive to these areas alone. The realm of autonomous cars is also progressing at a rapid rate these days. The economic effect of the use of autonomous (a word most people currently use in place of connected and automated vehicles) transportation is provided by reducing the time and cost of transporting goods and passengers and more efficient use of roadway capacity. Reducing fuel consumption will lead to a decrease in the emissions of harmful substances into the atmosphere, which will positively affect the environment to reduce the greenhouse effect. Autonomous. Transportation management will increase the comfort of passengers expanding the use of vehicles for people with disabilities(Figures 5 and 6). 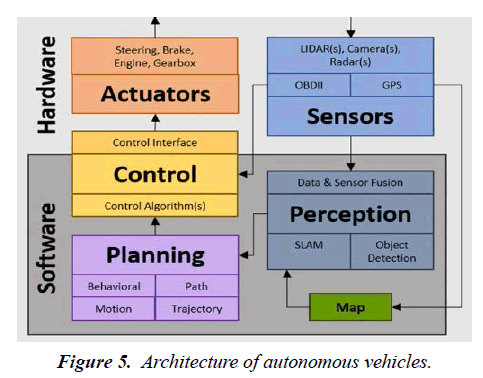 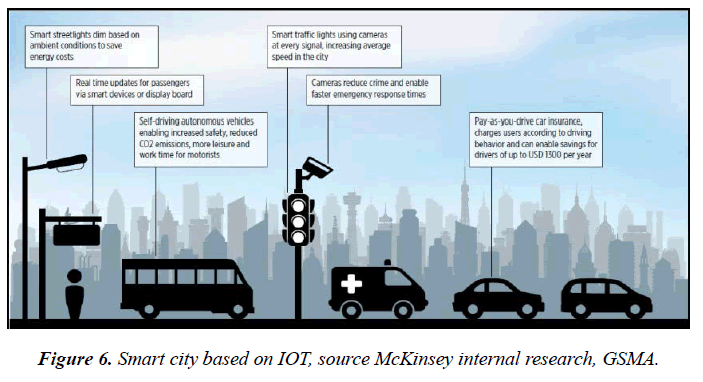 From a societal perspective, connected cars can help increase safety, productivity, and energy efficiency. An autonomous car can operate without human control and does not require any human intervention. Stated that modern autonomous vehicles can sense their local environment, classify different kinds of objects that they detect, can interpret sensory information to identify appropriate navigation paths whilst obeying transportation rules. Advanced safety features help drivers anticipate dangers and can even prevent collisions. Moreover, with access to information on current traffic conditions on the road, connected cars can dynamically optimize routes, limiting traffic congestions and freeing up time to do other things. In cities, the development of smart grids, data analytics and autonomous vehicles will provide an intelligent platform to deliver innovations in energy management, traffic management and security, sharing the benefits of this technology throughout society. Below figure describes the examples of IoT smart cities applications. 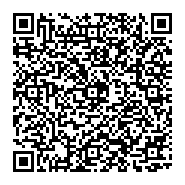