Density matrix in description of the collision of atomic particle with solid film.

In a number of current investigations within the scope of modern physics the time-resolved experiments and consequence theories play a central role in understanding of physical phenomena. Important application of these new results would be the detailed investigation of interaction of blood particles with environment. In the processes inside the moving elements of the living organism, the properties of the smallest particles, whose states are significantly determined by the speed of movement and the interactions with the surrounding objects, should play a significant role. As an important example consider the detailed information about the particle-solid and particle- nucleus interaction physics. Although the standard scattering theory in principal can give us estimations of probabilities of transitions of the system to different conceivable final states, it cannot explain some important intermediate processes which can effectively change the expected results. As an example of such a situation emphasize the next results:

Calculation and further analysis of density matrix (DM) for projectile which collides with a solid film reveals some new representations which hard to be anticipated without the calculation, namely:

1. The coherence properties in the projectile’s wave field are describing through the special function of coherence [1].

- density matrix of the projectile depending on two spatial points

and the time t.

3. During the collision with solid the number of different spatial areas where the mutual coherence in the projectile’s wave field is supported, can be multiplied.

4. The every part of projectile’s wave field can be individualizing as the separate particle having own property in its inner quantum state. The procedure which has a responsibility for such a transformation can be characterized as a spontaneous breaking of symmetry.

5. The process described in the point 3 can be considered as a special form of breaking in quantum mechanics.

7. The parts of the wave field considered above can be stabilized in its quantum state after been captured in its own polarization well (Figure 1). 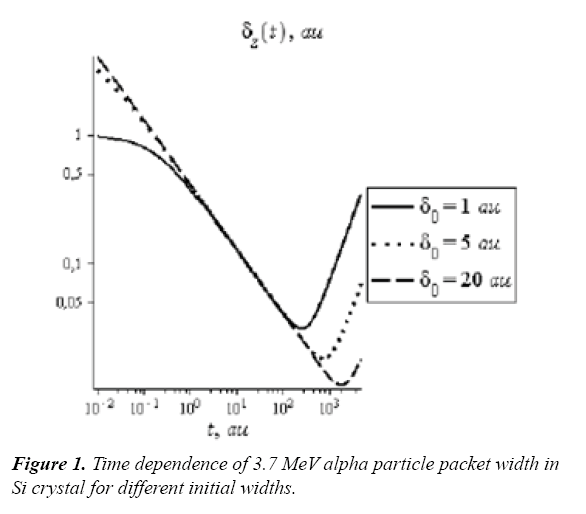 As an effect that requests new explanations consider the particle-atomic chain interaction phenomenon. Consider the passage of hydrogen atom parallel to the chain of seven carbon atoms. Interaction between the electron and atoms has described with the help of convenient potential coupling in the electron affinity well for each carbon atom. The detail of calculation is presented by Aleksandrov and Filippov [2].

In the Figure 2 we observe a possible splitting the electron’s wave packet during the passage of the hydrogen atom parallel to the chain of seven carbon atoms. The hydrogen atom is shown in the left of the second line, after traveling from the right to the left along the chain of carbon atoms shown in the first line. We see the non-uniform distribution of probabilities of localization the electron in the chain. The result was obtained with the help of direct numerical solution of the non-stationary 3D Schrodinger equation. 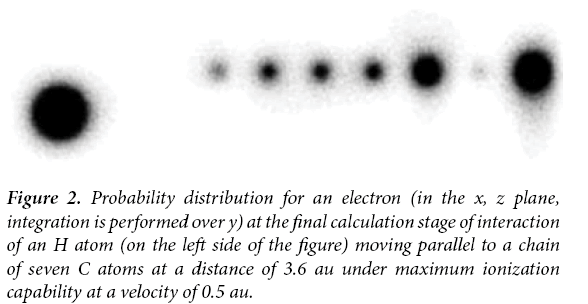 Figure 2: Probability distribution for an electron (in the x, z plane, integration is performed over y) at the final calculation stage of interaction of an H atom (on the left side of the figure) moving parallel to a chain of seven C atoms at a distance of 3.6 au under maximum ionization capability at a velocity of 0.5 au.

In above calculation all the non-elastic collisions with free electrons are dropped. If we take into account this interaction (assume that the event is take place in the carbon nano-tube), then the property of an electron’s wave packet significantly changes. When the coherence length becomes less the interatomic distance we come to conclusion that among several points of electron localization must survive only one (including the hydrogen atom conservation). How we can estimate the probabilities of each of outcomes? How we can understand the detailed mechanism of such a transition? That problem tightly connected to famous wave function reduction problem and in principal can be solved with the help of estimating the time- evolution of density matrix.

Analogous problems arise when the wave packet impinged a solid film and undergo an intense interaction with atoms in the film. Knowing the wave packet evolution during the passage through the solid film allows one to explain experimental results on the pore formation during the passage of high charged atomic ions through the thin carbon nano-membranes [3-5]. If it is finally proved that the formed pores allow estimating the parameters of moving wave packets of particles, it will lead to the discovery of another important area of research in modern physics and nanotechnology. Wave packets of particles are such structures in which information can be formed not even at the atomic, but at the continuum level, they pray to become the most important object of research for a long time.

Another important problem is the localization of charge carriers in the conductor when electric current flows. It is not clear the impact of this factor on the phenomenon of hightemperature superconductivity. Similar questions should arise in the study of the effect of localization of moving blood particles on their interaction with the walls of vessels or with the walls of cells in the processes of energy transfer and nutrient. All these problems are waiting the additional investigations.