In the present study, we report a case of a 58-year-old female patient presenting with Philadelphiachromosome (Ph)-negative blast cells and Ph -positive mature cells at diagnosis. The complete blood cell count showed the patient had a white blood cell count of 35.5 × 109/L and a differential blast count of 62%. A bone marrow biopsy showed closely packed marrow with blast cell infiltration. Blasts were weakly positive for MPO stain, but negative for PAS and ANAE stains. Moreover, blasts tested positive for CD34, CD13, CD117, CD15, CD33, and CD7 and negative for TdT, CD3, CD22, and CD19 in cytometric immunophenotyping experiments. The patient, who had the karyotype 46,XX,t(9;22) (q34;q11.2) [14]/45,XX,inv(3)(q21q26.2),-7[4], was therefore diagnosed as having AML. Fluorescence in situ hybridization (FISH) showed a decrease in Ph-positive clones and an increase in monosomy 7- positive clones after CD34-positive cell enrichment, suggesting that the blasts were primarily Phnegative. This case highlights the necessity of analyzing the cytogenetic characteristics of blasts to better understand the nature of the disease when only a fraction of the cells are Ph-positive.

The BCR/ABL1 rearrangement, the genetic hallmark of chronic myelogenous leukemia (CML), also appears as a distinct entity in mixed-phenotype acute leukemia and B lymphoblastic leukemia/lymphoma in the revised World Health Organization (WHO) classification. Although not defined in the revised WHO classification, Philadelphia chromosomepositive (Ph+) acute myeloid leukemia (AML) is also considered a rare entity with a poor prognosis [1,2].

A 58-year-old female was admitted to our hospital because of a pale appearance, which began about 20 days before admission.

She had been diagnosed with schizophrenia about 40 years previously and had taken drugs occasionally since then, but no treatment record was available. The patient and her family had no memory of hematological abnormalities. A physical examination showed pale conjunctivae and splenomegaly. The complete blood cell (CBC) count revealed a white blood cell (WBC) count of 35.5×109 /L with a differential count of 62% blasts, 27% neutrophils, 6% bands, 2% metamyelocytes, 2% lymphocytes, and 1% monocytes (Figure 1A). The hemoglobin was 47 g/L and the platelet count was 30×109/L. 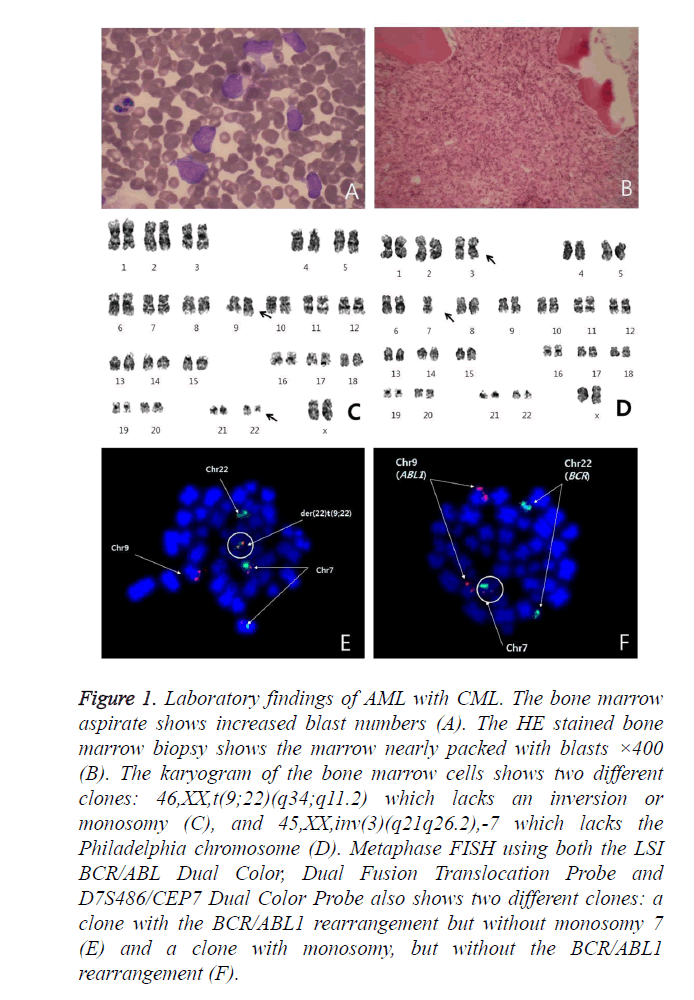 Figure 1. Laboratory findings of AML with CML. The bone marrow aspirate shows increased blast numbers (A). The HE stained bone marrow biopsy shows the marrow nearly packed with blasts ×400 (B). The karyogram of the bone marrow cells shows two different clones: 46,XX,t(9;22)(q34;q11.2) which lacks an inversion or monosomy (C), and 45,XX,inv(3)(q21q26.2),-7 which lacks the Philadelphia chromosome (D). Metaphase FISH using both the LSI BCR/ABL Dual Color, Dual Fusion Translocation Probe and D7S486/CEP7 Dual Color Probe also shows two different clones: a clone with the BCR/ABL1 rearrangement but without monosomy 7 (E) and a clone with monosomy, but without the BCR/ABL1 rearrangement (F). 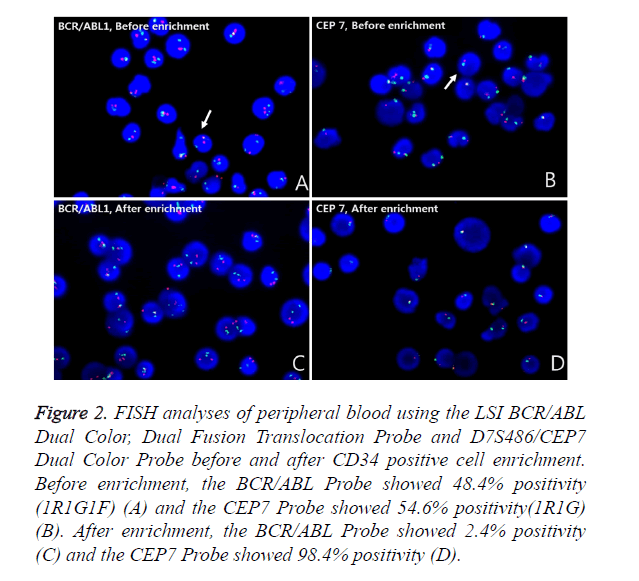 When blast numbers are increased and both a Philadelphia chromosome-positive clone and a clone negative for Philadelphia but with other cytogenetic abnormalities are observed, such cases could be reported as CML with additional cytogenetic abnormalities in a Philadelphia-negative clone or acute leukemia with a Philadelphia-chromosome-positive subclone, according to the history [2]. The emergence of clonal karyotypic abnormalities has been described in Philadelphianegative (Ph–) cells of CML patients treated with chemotherapy, interferon (IFN), and imatinib therapy. The incidences are vary with studies (2% ~17%) [5-7]. Although these cases showed similar prognoses to those of CML patients without cytogenetic abnormalities in Ph– clones, they can, in rare cases, progress to MDS or acute leukemia. Among various accompanying chromosomal abnormalities, monosomy 7 or 7q deletion is associated more frequently with development of MDS or AML [8,9]. However, in these progressed cases, the clinical outcome is variable from resolution with imatinib to death [10]. In rare AML cases, Philadelphia-chromosomepositive subclones can appear during treatment [11]. In this study, blast numbers were clearly increased in the Philadelphia-chromosome-negative clone and the BCR/ABL1 rearrangement was positive in CD34-negative cells. The findings suggest that this could be a case of AML in the setting of CML. A number of mechanisms have been suggested for cytogenetically abnormal Philadelphia chromosome-negative clones in CML [3,12,13]. There might be a mutagenic effect of imatinib. It is also possible that the proliferative stress placed on a small pool of Ph– cells after eradication of Ph+ cells by imatinib results in mutation and the emergence of clonal Ph– hematopoiesis. In addition, the presence of a majority of Ph+ cells at presentation of CML can mask the presence of concomitant Ph– clonal hematopoiesis. However, there is little evidence of the existence of cytogenetically abnormal Ph– clones in pre-treatment CML samples. Although a complete history was not available, this case could support the theories of preexistence. In this case, we were aware of the presence of the additional clone because of monosomy 7 and inversion 3. However, a large portion of acute leukemias show normal karyotypes and if these cases have Philadelphia chromosomes in mature cells, blasts could be mistakenly thought to have the Philadelphia chromosome. Chronic myelogenous leukemia blast crisis and acute leukemia with the Philadelphia chromosome are usually considered difficult to distinguish if a history is not available. Additionally, when only some of the cells are Philadelphia chromosome positive, this case shows the necessity of studies of the cytogenetic characteristics of blasts to better understand the nature of the disease.

This work was supported by the Soonchunhyang University Research Fund.