This study was conducted to analyse the socio-demographic variables in patients of suicidal attempt. This is a retrospective study comprising of 132 patients with suicidal attempts. They were evaluated for various socio-demographic factors. Females more commonly indulged in attempting suicide as compared to males and majority of the subjects belonged to the age group 21 to 29 years. In males majority of the cases were unemployed (40%), while in females mostly were housewives (63.14%). Marital status and level of education were found to be important factors. Patients from urban background out numbered the rural population in attempting suicide.

The episodes of attempting suicide are increasing world wide, reflecting the decreased threshold of attempters to adverse conditions. Suicidal attempts are commonly encountered in emergency in any hospital.

This study was carried out in the Department of Psychiatry and Department of Medicine in Gandhi medical college, Bhopal from 2006 to 2007. The sample comprised of all patients with a history of attempted suicide and who were willing to participate in the study during this tenure. A total number of 132 patients were evaluated with detailed history, physical examination and data collected.

History of previous attempt was found in 4% of males & 9.75% of females. Occupation wise, in females, house wives, and in males, unemployed ones formed the larger groups. 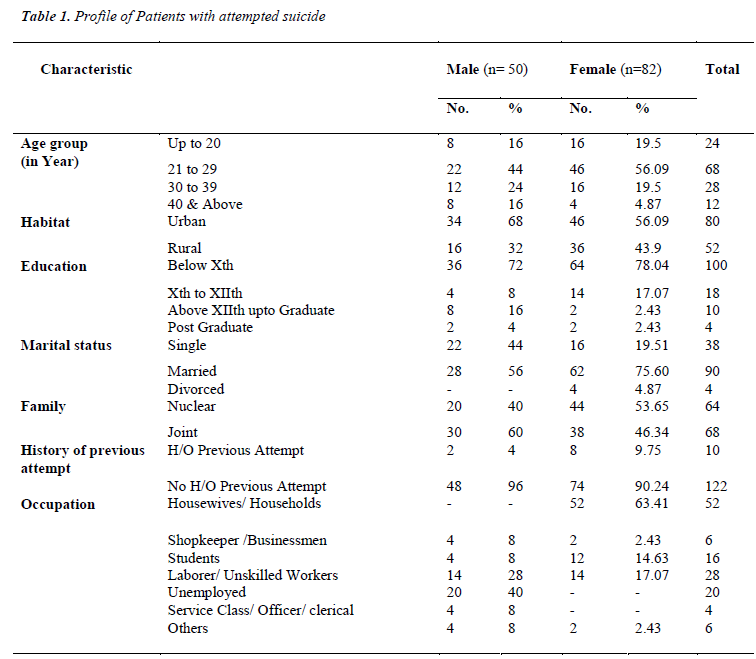 The study group comprised of 132 cases with history of attempted suicide. Among them majority of the subjects belonged to the age group 21-29 years (51.51%) followed by the age group 30-39 years (21.21%). The similar findings were reported by. Logaraj et al [2] and Ponnudurai [3]. There is female predominance as, among attempters, 82 of the patients were females (62.12%) and males were 50 (37.87%). Thus male: female ratio being 1:1.67 in the study. This kind of trend confirm the findings reported by Logaraj et al [2] but contrary to this study, male predominance in attempters was found by Ponnudurai [3,5,8]. We found that more failed suicide subjects were from urban back ground (60.6%) than rural background (39.39%) but contrary to this, more patients from rural back ground were reported by Logaraj et al [2]. Our data shows that among attempters majority of the cases were from the married group similar to the findings by Logaraj et al [2],

Bhatia et al [4]. However in some other studies unmarried male subjects were found to be more vulnerable for suicide [3,5,6,7]. Most of the attempters belonged to low education strata who were educated below Xth standard (75.75%) this was similar to other studies[4,5]. In our study we found that majority (51.51%) of the attempt cases were from joint families, it was opposite to the findings by WHO SEAR reports 2002 in which attempted suicide was more common in nuclear families [9]. We found, that out of 132 patients, 10(7.5%) patients had history of previous suicidal attempts with a male : female ratio of 1:4. However , more percentage(24%) of cases with pervious history of attempts, were found in other studies [2,4]. Occupation wise study showed that among females, largest group were housewives (63.4%) followed by laborers (17.07%) and students (14.63%). Among males, the largest group was unemployed (40%) followed by laborer/unskilled worker (28%), shopkeeper (8%). These findings were similar to some other studies [4].

Attempted suicide is a complex affair, however, present study implicates that the suicidal attempts are common in unemployed population with an absolute female predominance. Urbanization has also contributed to an increase in the level of stress in routine life. Further, it is difficult to derive concrete conclusions from small retrospective study at a tertiary hospital. Elaborate clinical studies along with long span survey on a large sample size involving multiple study centers will be necessary to convincingly analyze the various socio demographic variables in cases of attempted suicide.