Defection of phalanx: a complication of Bunnell's pulley reconstruction

Objective: To report defection of phalanx under the reconstructed pulleys with Bunnell’s technique.

Methods: We followed up 26 reconstructed annular pulleys in 23 digits of 18 cases for 20 months and analysed the X-ray results of those phalanges. The function of pulley reconstruction was observed. The joint flexion and extension movement of the finger joint was recorded.

Results: All the reconstructed pulleys were healed. The efficacy was good. No bowstringing sign was found. The defections of phalanx were found in the areas of reconstructed pulleys in all cases. Narrowing of medullary cavities, osteophyte formation and thinning of cortex of phalanges were found in some cases with X-ray examination. The joint flexion and extension movement of the finger joint has improved.

Conclusion: Defection of phalanges will be found after Bunnell’s pulley reconstruction. It could be caused by pulley’s pressure which is converted from the traction load of the flexor tendon. Prognostic Studies, Level IV.

35 patients underwent Bunnell’s pulley reconstruction between 2001 to 2012 in our hospital. Only 18 of them (12 males and 6 females) were contacted. The data of those patients were collected. Age at surgery was 5 to 60 years old. The median following time is 20 months (4 to 114 months).

As Bunnell described [6], we used a free tendon graft obtained from the superficialis tendon of adjacent finger or the palmar plate to restore the pulleys [7]. The length of them were more than 5 mm. After the suture, we put the suture nodes on the lateral side of the finger. Drainage was extracted 48 h after the surgery. Flexion and extension exercise was encouraged in the first 4 weeks under the protection of an elliptic open aluminium ring preventing the pulley from over-loading. After that, the ring was moved and patients can use their fingers as normal.

Statement: This study was approved by the Institutional Review Board (IRB) and informed consent was obtained from each patient.

We got in touch with 18 patients, of who, 26 annular pulleys in 23 digits were reconstructed, and collected their X-ray films. On those X-ray films there were osteophyte formation, narrowing of medullary cavities, and thinning of cortex. First, we drew two curves to simulate the normal shape of the phalanges. Secondly, we measured the width of the cortex at the narrowest site and marked it as “C”. Then we measured the distance of those two curves at the same direction and marked it as “D”. After that we recorded the ratio of “C” and “D” (Figure 1). 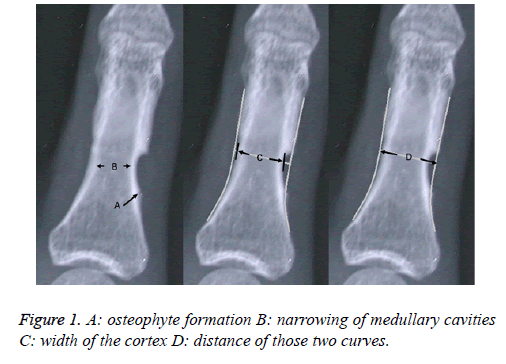 Figure 1: A: osteophyte formation B: narrowing of medullary cavities C: width of the cortex D: distance of those two curves.

All the reconstructed pulleys were healed. No bowstringing sign was found. We can find all the phalanges had defections in the areas of reconstructed pulleys (Table 1). Narrowing of medullary cavities, osteophyte formation and thinning of cortex of phalanges were found in some cases (Figure 1). The joint flexion and extension movement of the finger joint has improved.

Even not well-known as re-rupture, stiffness, synovitis, and infection [8], bone defection may be the most common complication of Bunnell’s pulley reconstruction. In our research every phalange got defection under the reconstructed pulley in spite of age, gender, finger number and range of motion.

Conolly reported another case of bone defection in which a 7 years old boy got a fracture of phalange after the pulley reconstruction [3]. They stated that this complication was the result of the inability of the tendon graft to grow and the tightness of the tendon loop. In our research, bone defection happened in adult cases in spite of children.

Lin reported a case of a 35 years old male who got hourglassshaped bone resorption around the proximal phalanx under the reconstructed pulley [4]. They stated that the length of reconstructed pulley was not the same with the normal one which caused stress concentrated at a small area. They thought that was the reason of bone resorption and called it pressure erosion of the bone. We agree with the pressure erosion theory for the defection of the bone was also located underneath the pulleys with glass-hour like shape in our research. Diaphyseal narrowing remained the same in follow-up X-rays years later in both their research and ours. We also found osteophyte formation in our cases means the repairing ability of the bone is stable.

Ferran and Dias reported a case of a 27 year old female who got bone resorption only 7 months later after the pulley reconstructed [5]. In our research the same complication occurred from 4 to 114 months after surgery.

Palmer [9], and Leung [10] mentioned that tunnel of tendon graft in scaphoid and lunate may grow bigger or even fractured after years. Now we believed that it was the result of pressure erosion, just like what happened in our research.

Doyle and Blythe [11] suggested that we reconstruct the pulley through tunnel drilled in the base of phalanx in order to avoid increasing thickness of finger. That was rejected by Schneider [12] and Le [13] who believed that it would cause a fracture of phalanx. It seems that the latter opinion is right for it is easier to get fracture of drilling tunnel than Bunnell’s pulley reconstruction.

In this study we observed bone defection under reconstructed pulleys and it has nothing to do with gender, age, finger number or range of motion. It may happen before 4 months since the surgery was performed. We believe that it was caused by pressure erosion. But it needs more experiments to prove it. So does the mechanism and further influence.