Objective: The purpose of this study was to investigate whether miR-495 is a factor influencing survival in clear cell renal cell carcinoma (ccRCC) patients.

Methods: Quantitative real-time PCR (qRTPCR) was performed to evaluate the expression level of miR-495 in 186 participants. Then the association between tissue miR-495 expression level and clinical outcome was investigated. Overall survival was evaluated using the Kaplan-Meier method. Multivariate analysis of the prognostic factors was performed with Cox proportional hazards model.

Results: The expression level of miR-495 was significantly decreased in renal cancer tissues compared with that in normal matched tissues, and a high expression of miR-495 was found to be significantly associated with Histologic grade (p=0.000), Lymph nodemetastasis (p=0.000), and Distant metastasis (p<0.001). In addition, the results of Log-rank test indicated that ccRCC patients with low miR-495 expression experienced shorter overall survival. Multivariate analysis suggested that miR-495 expression was an independent prognostic factor for overall survival of patients with ccRCC.

Conclusions: Our results indicate that miR-495 relates to the prognosis of patients with ccRCC and may act as a promising predictor of ccRCC recurrence.

Renal cell carcinoma (RCC) is responsible for approximately 3% of all cancers in adults and is the third most common urological cancer, with incidence rates increasing 2% per year [1,2]. Approximately 60,920 novel cases of RCC were diagnosed in the United States in 2011, with an estimated 13,120 mortalities [3]. Clear cell RCC (ccRCC) is the most type of RCC. Radical nephrectomy is effective to cure early and local ccRCC, but patients with metastatic RCC [4] face a poor prognosis and have limited therapeutic options. Therefore, investigating the pathogenesis and biological features of ccRCC is crucial to enhance early detection and treatment.

MicroRNAs (miRNAs) are short non-coding regulatory RNA involved in regulation of important cellular processes as differentiation, proliferation, cell cycle, or apoptosis [5,6]. Accumulating evidence has shown that miRNAs can participate in tumour genesis, progression and metastasis either as oncogenes or tumour suppressors [7,8]. MiR-495 was reported to act as a tumor suppressor gene or an oncogene in a lot of cancers including non-small cell lung cancer, breast cancer, glioblastoma, and gastric cancer [9-11]. Recently, Lv et al. found that miR-495 suppresses human renal cell carcinoma malignancy by targeting SATB1 [12]. Those results informed that down-regulation of miR-495 levels are associated with worse outcome in ccRCC. However, to our knowledge, the relationship between the expression of miR-495 and survival in ccRCC patients remains to be determined.

Fresh clinical ccRCC specimens and adjacent normal tissues were collected from 166 patients who underwent radical nephrectomy between 2007 and 2010 in the Second Affiliated Hospital & Yuying Children’s Hospital of Wenzhou Medical University. All patients did not receive anticancer treatment, including chemotherapy, radiotherapy and biotherapy, prior to surgery resection. Samples were flash frozen in liquid nitrogen until use. The clinical and pathological information from patient records was gathered, and the details were listed in Table 1.

Statistical analysis was conducted using the SPSS 18.0 for Windows (SPSS Inc., Chicago, IL, USA). The distinct expression of miR-495 between tumor tissues and normal tissues was examined by independent samples t-test. Chis-quare test and t test were performed to explore the associations between miR-495 expression and clinical characteristics. The overall survival was analyzed by log-rank test, and survival curve was plotted based on Kaplan-Meier method. Multivariate analysis was performed using the Cox proportional hazard model. P values less than 0.05 were considered statistically significant. 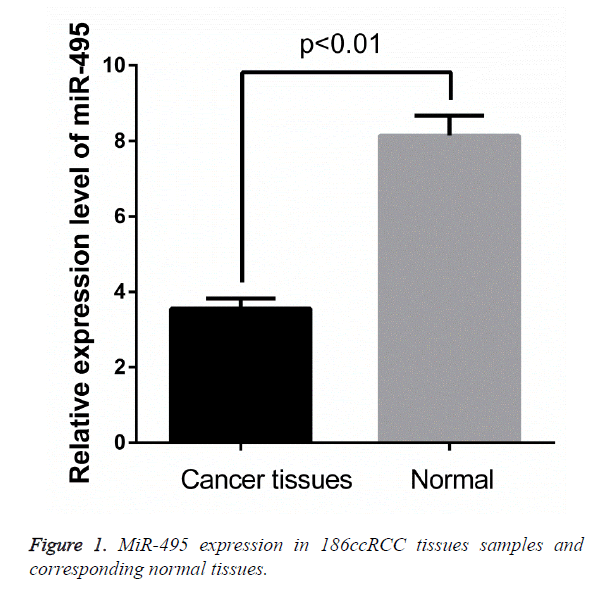 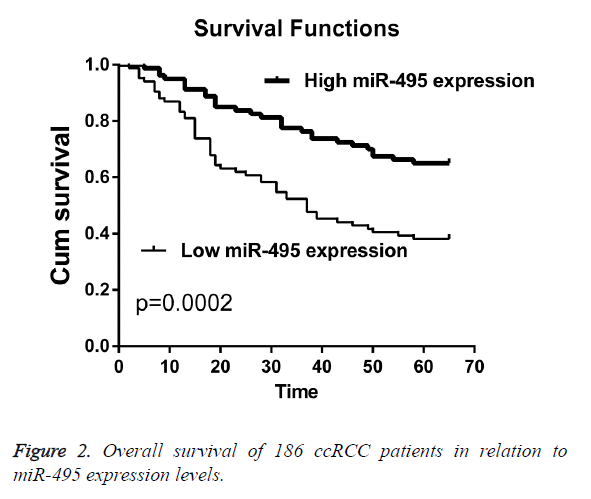 The correlation of miR-495 expression with different clinicopathological parameters in gliomas was illustrated in Table 2. Low expression of miR-495 was found to significantly correlate with higher histological grade (p=0.000), lymph node metastasis (p=0.000) and tumor distant metastasis (p=0.001). No significant correlations were observed between miR-495 expression and any other clinicopathological features, such as gender, age, tumor size, tumor stage (p>0.05).

Renal cell carcinoma remains to be one of the leading causes of death [13]. It is necessary to search for novel markers for ccRCC, which could improve the outcome of this lethal disease. MiRNAs are aberrant expressions in multiple tumors and play an important role in tumorigenesis and development and may be used as novel biomarkers for the prognosis and treatment of cancer. For instance, Bai et al. found that down-regulation of miR-32 predicted poor prognosis in human non-small cell lung cancer [14]. Zhang et al. showed that MicroRNA-377 suppressed proliferation and invasion of human glioblastoma cells by directly targeting specificity protein 1 [15]. Zhang et al. identified Serum miR-200c as a prognostic biomarker for gastric cancer [16]. Zhu et al. found that MiR-451 acts as an anti-oncogene in RCC and the down-regulation of miR-451 was correlated with lower survival rate of RCC patients [17]. In our present study, our attention focuses on miR-495.

In our present study, we showed that miR-495 was significantly down-regulated in ccRCC tissues for the first time. The relationship of the miR-495 with various clinical features of ccRCC was analyzed. The results showed that low expression of miR-495 was correlated with higher histological grade, lymph node metastasis and tumor distant metastasis. Suggesting that miR-495 might be involved in the carcinogenesis and metastasis of ccRCC. Furthermore, ccRCC patients with low miR-495 expression level had distinctly shorter OS than patients with high miR-495 expression level. The results of Cox regression analyses revealed that miR-495 may be an independent prognostic marker for ccRCC patients.

Several studies reported that miR-495 acted as a tumor suppressor gene or an oncogene in a lot of cancers. For instance, miR-495 functions as a tumor suppressor in acute myeloid leukemia (AML) by targeting essential leukemia-related genes [18]. Xu et al. found that MicroRNA-495 suppressed cell growth and migration in endometrial cancer by targeting FOXC1 [19]. Another study revealed that miR-495 acts as an oncogene in breast cancer via down regulation of E-cadherin and REDD1 [20]. To our interest, Lv et al. found that MicroRNA-495 served as a tumor suppressor in human ccRCC, suggesting that miRNA-495 could be promising biomarkers for ccRCC prognosis.

We provide the evidence that miR-495 was down regulated in ccRCC patients and may act as independent prognostic factors for ccRCC patients.