Mitomycin C (MMC) is antitumor-antibiotic, currently in use for treatment of various solid tumors. The effect of different dosages of MMC was tested in human lymphocyte culture after exposure for different duration. The exposure of 0.05μg/ml MMC for 24 hours was not sufficient to induce mitotic inhibition and chromosomal aberrations. The cells exposed to concentration 2.0μg/ml and above for last 24 hours showed complete inhibition of mitotic activity. Low concentration exposure for long duration inhibits mitosis rather than exposure to high concentration for short duration. Mitotic indexes in after exposure of MMC for same duration were decreased significantly with the increase in the dose of MMC. The highest frequency of chromosomal aberrations was observed in cultures treated with 0.5μg/ml MMC for the last 24 hours of culture. MMC did not induce chromosomal aberrations randomly; which more commonly affected chromosome 1, 9 and 16. Most commonly affected was chromosome 9 followed by the involvement of chromosome 1 and least was the involvement of chromosome 16. The non random interchange breakages induced in these chromosomes were significantly at secondary constriction region i.e., site of paracentric heterochromatin, most commonly that of chromosome 9.

The ideal antitumor drug should produce maximum mitotic inhibition of tumor cells with minimum side effects. To achieve this, the dose of the drug in the lowest possible concentration should be administered. Maximum chemotherapeutic drugs are first studied in animals but cytogenetic studies involving culture of human cells in which action of drug can be assessed in multiplying human cells. Mitomycin C (MMC) is a chemically reactive antitumor-antibiotic derived from Streptomyces caespitosus [1]. MMC had been in clinical use for more than 30 years. MMC has proved effective in the frontline treatment of many solid tumors such as superficial bladder cancer [2], gastric carcinoma [3], pancreatic neoplasias [4], anal carcinomas and esophageal carcinomas [5]. It is also used in combinations with other anti-tumor agents in palliative treatment of many advanced cancers or cancers that have become resistant to other forms of therapy [6]. The activity of this agent in solid tumors and its enhanced effectiveness against hypoxic cells those are resistant to radiation [7]. This increased interest in MMC and investigations of new approaches that increasing its effectiveness.

The usual side effect of currently practiced dose of MMC is myelosuppression which is dose dependent and increases with dosage >10 to 20 mg/m2. This toxicity is dose limiting [3,8]. There is need of further evaluation to find new dose regimen for MMC to enhance its therapeutic effects and minimize side effects.

The primary action of MMC has been considered to inhibit the deoxyribonucleic acid (DNA) synthesis. Very few workers have studied the cytogenetic effects of MMC on human chromosomes in lymphocyte culture. There were many short comings of these Cytogenetic studies. Some of them have used very few samples for testing effects of MMC on chromosomes; some have used crude method for identification of chromosomes while some have used other DNA damaging drugs simultaneously with MMC [9-13]. This indicated that there was need of further evaluation of MMC actions on chromosomes in lymphocyte culture to overcome all the short comings of previous studies. Hence present study was undertaken to provide the basis for evaluating antitumor effects MMC with regards to its effects on specific sites and specific regions of chromosomes of human lymphocytes.

Each sample of peripheral blood was cultured in RPMI1640medium (Himedia) supplemented with 10% FBS (Himedia) and 10 μg PHA/ml (Geni) and incubated at 37°C for 72 hrs. Group A was not exposed to MMC, Group B was exposed to six different concentrations (subgroup B1-B6: 0.05, 0.1, 0.5, 1.0, 2.0, 5.0 μg/ml med-ium respectively) of MMC (Sigma, USA) for 24 hours of culture, Group C was exposed to two different concentra-tions (subgroup C1 and C2: 0.05, 0.1μg/ml respectively) for whole 72 hours. Each sample of group D, after 24 hrs of incubation, was exposed to two different concentra-tions (subgroup D1 and D2: 0.5, 1.0μg/ml respectively) for 1 hour. After 25th hr, cells were washed with RPMI 1640 medium thrice to obtain a MMC free cell suspension and cells were resuspended in fresh medium and reincub-ated for remaining period. One hr prior to harvesting 100 μL Colchicine (Himedia) (0.25 μL/ml) was added to each culture tube. Cells were centrifuged at 1000rpm for 10min. Cells were suspended in 5ml of prewarmed (37°C) 0.075M KCl (hypotonic solution) and incubated at 37°C for 10min. Cells were resuspended in 5ml of chilled fixative (methanol: glacial acetic acid: 1: 3). The fixative was removed by centrifugation and the procedure was repeated thrice. To prepare slides 2-3drops of fixed cell suspension were dropped on clean slides and air dried. After treatment of 0.1% Trypsin-EDTA for 12-20 seco-nds, slides were stained in 5%Giemsa solution in phosph-ate buffer (pH 6.8) for 4-5min. Slides were screened using Olympus CX31(Japan) microscope and microphotograp-hed. Data was analyzed using S.P.S.S. version 14.0 soft-ware.

Mitotic index indicates proliferating activity of cultured cells. The mitotic index (Mitotic Index = Number of cells in mitosis per 1000 observed cells) was determined after exposure to different dosages of MMC for different duration (Table 1). The exposure of 0.05μg/ml MMC for 24 hours (subgroup B1) was not sufficient to induce mito-tic inhibition. The cells exposed to concentration 2.0μg/ ml and above for 24 hours (group- B5-6) showed complete inhibition of mitotic activity. Low concentration (0.05, 0.1μg/ml) MMC exposure for long duration of 72 (group C) hours inhibits mitosis rather than exposure to high concentration (0.5, 1.0μg/ml) for short duration of 1 hour (group D). Mitotic indexes for same duration of exposure were decreased significantly with the increase in the dose of MMC. The number of chromosomal aberra-tions induced after different doses of MMC for different time exposure is shown in Table 1. The frequencies of total chromosome aberrations in each group were express-ed per 100 metaphases examined.

Table 1: Effect of MMC on mitotic index and number of induced chromosomal aberrations 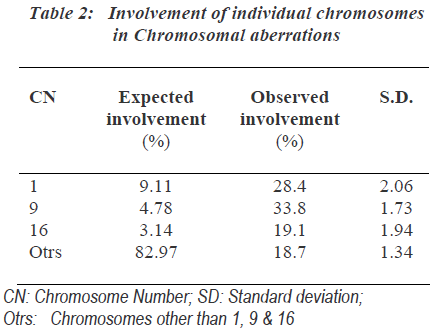 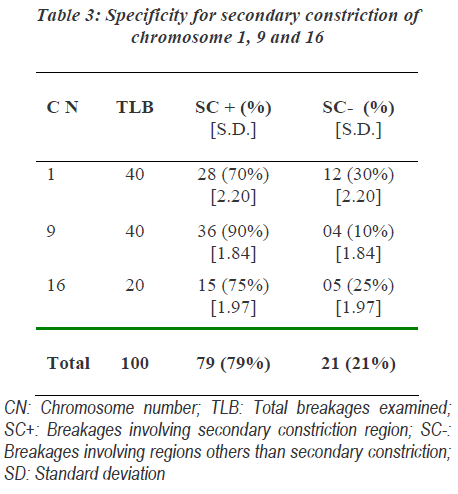 Table 3: Specificity for secondary constriction of chromosome 1, 9 and 16

Mitomycin C is an antitumor antibiotic. Due to its clinical applications, it is a centre of biomedical research. The primary action of MMC has been considered to inhibit the deoxyribonucleic acid (DNA) synthesis by cross-linking of the complimentary strands of DNA [15]. This would inhibit DNA replication and probably this might be the antitumor action of this drug. Very few workers have studied the effects of MMC on human chromosomes that were with many drawbacks. Cohen MM et al and Shaw MW et al used five samples and during that period, G-banding technique and individual chromosome identification criteria were not available [9-10]. Latt SA found in five individuals MMC-induced sister chromatid exchanges (SCE) in lymphocytes grown in medium containing 5-bromodeoxyuridine (5-BRDU) [11]. 5-BRDU itself was an agent which produces chromosomal damage. The observations in his study might be summative effects of two DNA –damaging agents i.e., 5-BRDU and MMC. Tchun TS et al studied MMC effects only in one individual [12]. Abdel-Halim et al used sample from one individual with 5-BRDU pretreatment. To overcome these short comings, in the present study, samples from 100 healthy individuals were studied [13]. The observations of the present study suggested that lower concentrations MMC exposure for long duration inhibited mitosis significantly more than exposure to higher concentrations for short duration. Thus, during chemotherapy, rather than giving high dosage of MMC at long intervals, it is better to give small doses of MMC repeatedly to cause maximum inhibition of mitotic activity of tumors so that toxicity will be minimal. Currently practiced standard dose of MMC is as intravenous bolous at 15-20 mg/m2 on day 1 of a 6 to 10 week cycle [3]. The usual dose-limiting toxicity of MMC is myelosuppression and this toxicity is dose related, increasing with doses >10 to 20 mg/m2 [8]. By using such methods of sustained release of MMC, MMC can be used at low concentration with sustained release which will be more beneficial for reduction of toxicity of MMC. The results of the present study suggested that MMC did not induce chromosomal aberrations randomly; t more commonly affected chromosome 1, 9 and 16.

Fauth E et al showed that MMC-induced micronuclei revealed the preferential occurrence of parts of chromo-some 9 by using interphase FISH technique [18]. This finding strongly correlated with preferential underconden-sation of heterochromatin of chromosome 9 [9]. Similar correlation had been noted in lymphocytes treated with 5-azacytidine [19] and idoxuridine [20]. Heterochromatin of chromosome 9 had unique DNA composition which had been shown to contain a mixture of various repeated sequences [21]. Molecular study by Kumar S et al indicated that MMC is selective for guanine nucleosides in the sequence 5’-CpG-3’ (CpG) [22]. Induction of DNA lesions by MMC is enhanced when the cytosines of these MMC-susceptible sequences are 5-methylated [23]. Para-centromeric heterochromatic bands have been reported to contain GC-rich repeats and harbor highly methylated DNA [24]. Thus, the findings of present study i.e., a non-uniform distribution of MMC induced interchanges among human chromosomes with a striking preference for heterochromatic region of chromosome1, 9 and 16 can be explained as per molecular basis. Secondary constric-tions correspond to late-replicating regions of DNA [25]. DNA damage to this secondary constriction regions with non-transcribed DNA was repaired less rapidly than in euchromatin [26]. This explains that MMC affected CpG sequences all over the DNA but the affected heterochro-matin regions did not get repaired and it was seen to be affected more than other regions. Thus the present study with the use of human cells may be useful model study for DNA damaging drugs.