Cystitises in the equine species: pathogenetic causes, histomorphological aspects and analogies with the human species

Reports in literature of urinary bladder alterations in the equine species are few and far between Most excretory urinary tract inflammation pathologies are triggered by some sort of infection, although chemical and physical causes have also been evidenced, particularly in human medicine. Infrequent cases of phlogosis caused by toxins in the bloodstream (Cantharidin and Mycotoxin in the horse) have, however, been observed in veterinary medicine. The aim of this paper is to present a comparative study of equine cystitises and their analogies with the human species. To this end, the authors have examined 235 urine bladders taken from regularly slaughtered horses.

Few descriptions of pathologies of the urinary bladder in the equine species, as distinct from other species such as dogs, cats, swine, bovines, and ovicaprines [1-7] are available in published records.

Some authors believe that urinary system infections occur less frequently in the equine than in other species. It may well be that the lower incidence of reports of this sort of infection should not merely be ascribed to a particular natural species-specific resistance, but also to the relatively scant interest in this subject thus far. Reports of urinary bladder alterations, which also include a case of encrusted cystitis secondary to a Corynebacterium matruchotii infection, in the equine species are, in fact, few and far between [8-11]. As far as we could tell from our research, no anatomohistopathological investigations appear have been carried out with regard to the different forms of cystitis, and we thus thought it appropriate to implement a study aimed at pinpointing urinary bladder alterations in the horse.

e collected 235 bladders from horses that had been regularly slaughtered in various slaughterhouses within the district of Bari over the last few years. Equines, all of foreign origin, were split into two different age groups: horses aged 10 months to 5 years, and horses aged 5 to 20 years.

Once collected, the bladders were immediately drained of urine, cut longitudinally and then examined. They were fixed in tamponated formalin, embedded in paraffin wax and sectioned at 4μ.

The slide sections for each bladder sample were stained using the E.E.,Van Gieson and Von Kossa methods (Merck, Darmstadt, Germany).

Macroscopic examination enabled local alterations in the bloodstream, e.g. active and passive hyperaemia, and above all haemorrhages of different origins, such as petechiae, ecchymoses, or more widely dispersed manifestatiotions of variously distributed actual extravasations to show up. In some cases, the haemorrhagic events were accompanied by calculi, either in the form of modest quantities of sandy concretion settled on the bottom of the bladder, or in the shape of a large quantity of amber yellow gravel taking up approximately 1/3 of the overall volume of the organ. Furthermore, some cases of volume change were also observed (hypotrophy, hypertrophy, and atrophy). Lastly, there was considerable evidence of inflammatory processes. As a rule, a determining cause for bladder phlogoses, such as those within the excretory urinary tracts, tends to be the ingress of inflammatory process- causing micro-organisms into the bladder; however, other pathogenetic causes have now been identified. Specifically, these causes are recognized as being physical (especially radiation), chemical (provoked by pharmaceuticals), and immunological, related to allergic factors of a dietary or pharmacological nature [12].

Aetiological agents, such as E. Coli, Proteus, and Corynebacterium, can cause various cystitises, their morphological picture depending not only on the aetiological agent involved, but also on the intensity of the infective cause, on its duration, and on the susceptibility as well as the inherent resistance of the organism itself. The most prominent aspect of the anatomohistopathological lesions is a marked presence of different types of exudate, which are primarily responsible for forms of both acute and chronic cystitis (Table 1). Our study revealed the following: Cystitises are extremely common inflammatory processes that can attack the bladder, with a much higher incidence in female subjects. Along with the predisposing factors, i.e. pH alteration, urinary stasis, bladder mucosa irritation, the pathogenic action of some micro-organisms that have managed to make their way into the bladder by ascending or descending routes, plays a key role in determining the origin of these phlogoses. A higher incidence of phlogosis of ascending origin in females can be ascribed to anatomical conformation as well as to shortness of the urethra. In nearly all cases, the excretory urinary tract inflammation is triggered by an infective cause, such as E. Coli, Proteus, or Corynebacterium urealyticum, although, particularly in human medicine, chemical and physical causes are also well-known. Nonetheless, in veterinary medicine, cases of phlogosis caused by toxins occasionally present in the bloodstream (Cantharidin and Mycotoxin in the horse, Cyclophosphamide in the dog) have been observed.

The attached table illustrates the various forms of cystitis observed during our study.

In mild forms of Simple Acute Cystitis, the mucosa appeared widely reddened, sodden and oedematous, especially in the submucosa (Fig. 1). The phlogosis was sometimes accompanied by uneven, diffuse punctuate or petechial haemorrhages, as well as by slight catarrhal exudations. Apart from hyperaemic and congestive phenomena in the capillaries, histological tests also revealed a certain amount of leucocytic penetration into the lamina propria, and regressive alterations of the covering epithelium tending to desquamate with small mucosal erosions. 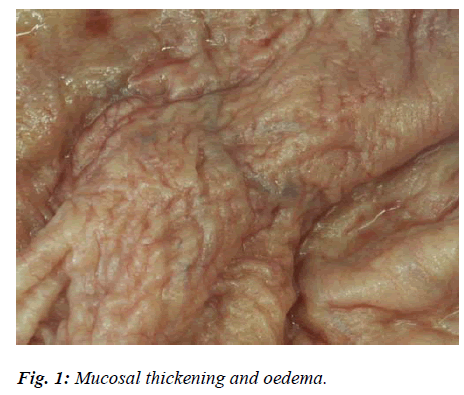 In other cases, the mucosa appeared very hyperaemic, thickened and oedematous with desquamation of the epithelium. This characteristic was chiefly due to the presence of thick, creamy, yellowish material mainly on the bottom of the mucosa, and was diagnosed as a Purulent Cystitis, confirmed by the ascent or descent of pyogenic agents into the bladder. In addition to the oedema, the histological test highlighted a marked infiltration of neutrophilic granulocytes into the mucosa, its covering epithelium appearing significantly damaged, while haemorrhagic infiltrates could be seen in the submucosa.

In some samples, the severely hyperaemic mucosa appeared to be dotted with more or less pervasive haemorrhagic suffusions which, in some cases, turned into widespread haemorrhagic stuffing. Markers such as these are clear evidence of acute haemorrhagic phlogosis (Haemorrhagic Cystitis).

The presence of shiny, translucent blisters, speckled with haemorrhagic infiltrate, lent an uneven aspect to the mucosa, which was mottled and swollen in a bunch-like, noduliform manner very closely resembling that of Bullous Cystitis, as described in human medicine. The histological test, on the other hand, flagged up four chief markers that enabled us to categorise the aforementioned aspect as signifying chronic cystitis: the strong prevalence of productive phenomena, the fibrous changes in the mucosal chorion, partly destroyed and partly hyperplastic, with diffuse infiltrates in the submucous and muscular coat, the pavement-like pattern of the metaplasia exhibiting signs of vacuolation, and the formation of outgrowths of a polypoid aspect related to the hyperplastic reaction (Figs. 2 and 3).

Evidence of the onset of fibrous tissue, which tended to replace the muscle fibres in part, was also noteworthy. This type of growth led to the development of small cystic formations and the presence of a slight inflammatory infiltrate (Cystitis Cystica).

In other cases, slight reddening of the mucosa, confined to the regions subjected to a build-up of calculi, epithelial exfoliation with mucosal hyperplasia and a fair degree of parietal thickening were recorded. In a few cases only, was there any evidence of sclerosant Hyperplastic Cystitis, characterised by wall thickening and stiffness due to the proliferation and sclerosis of the connective tissue. In these sorts of cases, there was a prevalence of productive processes at the expense of the stromal component, while in other cases the stromal hyperplastic reaction led to deep wide-based outgrowths. Histologically speaking, there were marked lymphoid infiltrates in the perivasal tissue above the epithelioid changes evidenced by proliferative fibrous tissue infiltration.. The chorion, too, displayed clear evidence of having undergone fibrous transformation, while the covering epithelium was partially destroyed, partially hyperplastic, with evidence of metaplastic phenomena (Fig. 4). 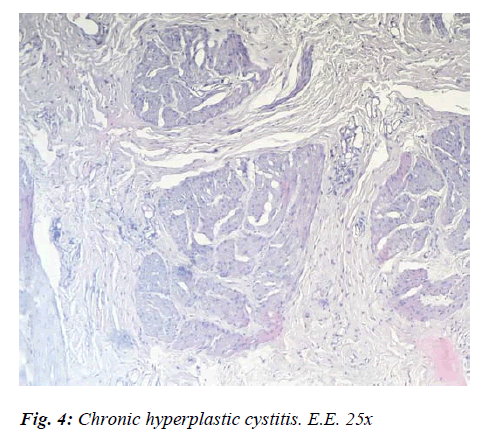 The presence of minute formations of greyish-white nodules, composed of follicular lymphocytic aggregate buildup, clearly pointed to an evolution towards Follicular or Nodular Cystitis. Histologically, what appeared to be a round cellular infiltrate, presenting as nodular formations deep in the lamina propria, was observed.

In a sample subjected to careful macroscopic examination, the thickened bladder wall appeared to reveal layers of chalky deposits in the shape of somewhat solid crusts, randomly distributed (Fig. 5 and 6). 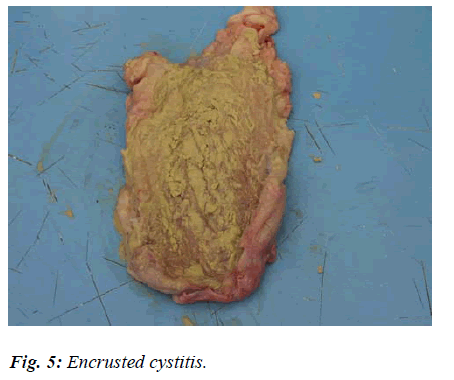 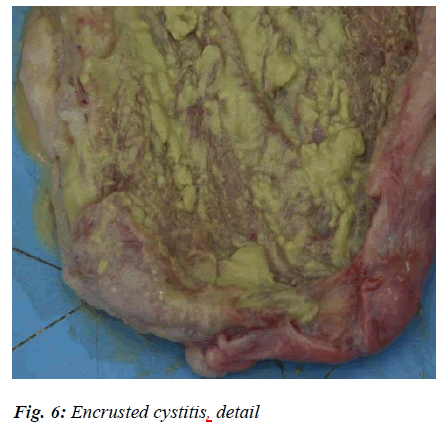 This sort of appearance, described in human medicine as an Encrusted Cystitis, is caused by the prolonged action of specific bacteria, i.e. Escherichia coli according to Ascenzi e Mottura [13], Proteus according to Nicolosi et al [14], and Corynebacterium urealyticum according to Suarez et al [15].

It would appear that pathogens are able to split urea and, thus, render urine alkaline. This pH gradient encourages the scattering of calcium and magnesium phosphates onto the pseudo-membranous exudates covering the bladder wall. What follows is the formation of greyish-white, solid, brittle plates (or crustae), dotted all over the mucosa and surrounded by a hyperaemic halo.

After histological testing, apart from the tendency to chorion mucosal fibrosis, which indicated that the epithelium was variously compromised, there were initial signs of metaplasia, widespread oedematous areas, a presence of lymphoid infiltrates, and considerable degeneration of the muscular tunica in its various stages were observed (Fig. 7). 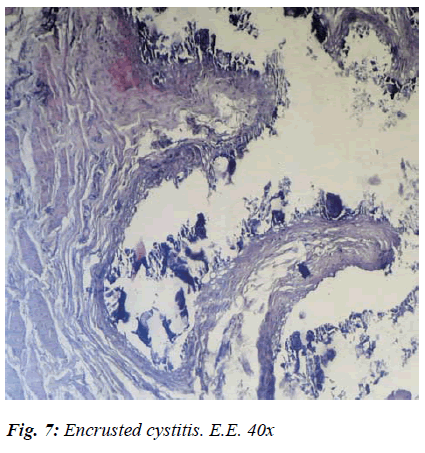 Our research threw up quite a high incidence, i.e. 19.55%, of inflammations of the urinary bladder. Such an apparent contradiction, though, can be explained by the fact that testing was carried out on female animals that had just arrived from Eastern Europe which had, therefore, been under stress because of the lengthy journey. This hypothesis is borne out by the fact that a good number of the changes, in both the young and the adult subjects, were acute.

As with phlogoses affecting the various apparatuses, some local or general predisposing factors undoubtedly also have an important pathogenetic role to play where the bladder is concerned. These factors encourage urinary stasis and bladder congestion. Furthermore, the flatcelled metaplasia found in most chronic phlogoses could be an indication of on-going oestrogen treatment or, possibly, hypovitaminosis D, while the not insignificant number of haemorrhagic forms might suggest some chemical or toxic action. Our observation of an encrusted cystitis representing a severe and rare form of chronic phlogosis, in the horse as well as in other animals (16-19), characterised by the presence of excessively alkaline urine and by the formation of plates of calcified encrustations, was also striking.

In conclusion, we can claim that urinary cystopathies are also fairly common in the equine species, and that, regardless of pathogenetic cause, their anatomohistopathological profiles are, at the very least, superimposable.

The research work was supported by grants from MIUR, Rome (Italy).