Cystic Hygroma of the Neck: A Case Report and Review of Literature

Cystic hygroma is fluid-filled sac that results from a blockage in the lymphatic system. It is a congenital malformation of lymphatic system, resulting from failure of development of communications between lymphatics of various regions. It commonly occurs in the neck as a large, deep, diffuse swelling. They are usually found in the posterior triangle of the neck. We present a case of cystic hygroma in a 5-months old baby boy that was managed in our Centre.

Cystic hygroma (CH) is a congenital malformation of lymphatic system.1 The incidence of CH is approximately 1 in 6000 live births [1]. It presents as a painless, fluctuant swelling. They are soft tissue tumour of disputed pathogenesis originally reported by Redenbacker in 1828 and the name “Cystic Hygroma” was coined by Werner in 1834 [1]. It is also a benign infiltrative malformation of the lymphatic channels [2].

It often presents as a swelling in the head and neck region accounting for 70-80%, but can be present at other anatomical locations like axilla, superior mediastinum, thorax, abdomen, shoulder, retroperitoneum, scrotum, pelvis, limbs and pharynx [2]. Due to its variable presentations, its optimum treatment often poses a potential challenge.Cystic hygroma (CH) is a congenital entity which occurs due to failure in development of communication between lymphatic and venous system [3].CH is considered as a developmental tumour of lymphatic origin and is a relatively rare lesion [4]. The cause of cystic hygroma is believed to be developmental defect or primary multi-locular cystic malformations of dilated lymphatics [5].There are two histogenic theories: Firstly, cystic hygroma is due to congenital blockage of lymphatic system or secondly it is a true neoplasm [2].

However, CH does not cause significant morbidity, except facial disfigurement, sudden increase in size when infected, and rarely respiratory difficulty [3]. We therefore, present a case of cystic hygroma in the posterior triangle of the neck in a 5-month old boy which was managed in our Centre.

A 5-months-old male infantwas referred to the Maxillofacial Clinic of Barau Dikko Teaching Hospital, Kaduna from the Pediatric Outpatient Clinic with complaints of right sided neck swelling which was present since birth but has been gradually increasing size. The child weighed 5.8kg. On examination, there was a large swelling in the cervical region on the right side of neck measuring 12 X 6 cm2 (Figure 1). The swelling was non-tender, fluctuant, easily compressible and transluminant,located in the posterior triangle of the neck. Aspiration biopsy yielded yellow colored fluid. Ultrasonography of neck region showed cystic swelling, which measure 29.0cm3. There was significant internal echoes within it and has septations. It is avascular and appears separate from the thyroid gland. The great vessels on the right side are laterally displace but not compressed. There are small adjacent lymph nodes with largest measuring 1.5cm x 0.8cm. The left side of the neck was preserved. A diagnosis of cystic hygroma was made. Blood investigations showed hemoglobin concentration of 11.5g/dl, and chemistry showed urea 1.1mmol, sodium 138mmol/l, potassium 4.1mmol/l, chloride 98mmol/l, bicarbonate 20mmol/l and creatinine 20mmol/l. Surgical enucleation of the cyst was done under general anaesthesia (Figure 2) and postoperative period was uneventful. The cyst wall (Figure 3) was submitted for histopathology examination, the result showed cyst wall lined by predominantly flattened epithelium, focally columnar and papillary. This overlies a fibrocollagenous wall with areas of marked lymphocystic aggregation. Serous salivary glands noted.The diagnosis was given as cysticlymphangioma(hygroma) (Figure 4). 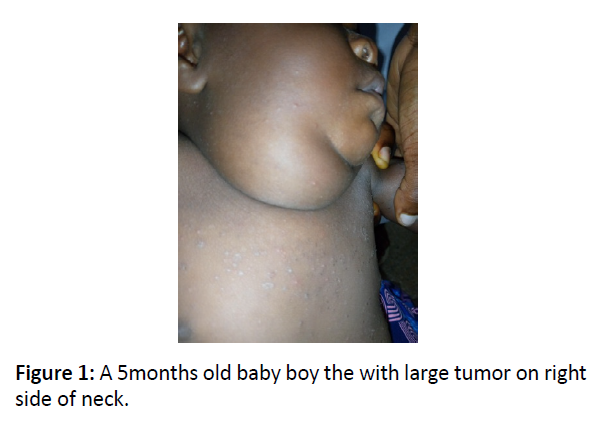 Figure 1: A 5months old baby boy the with large tumor on right side of neck. 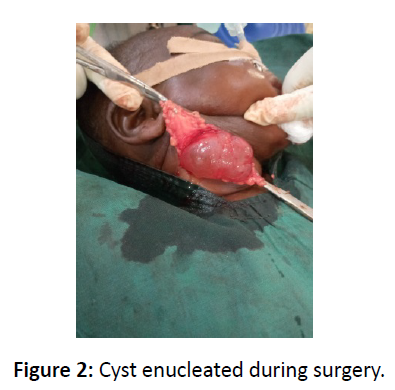 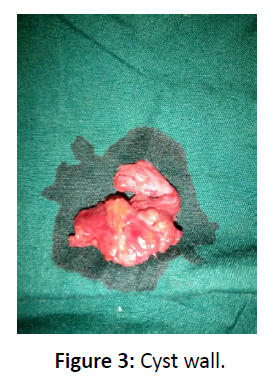 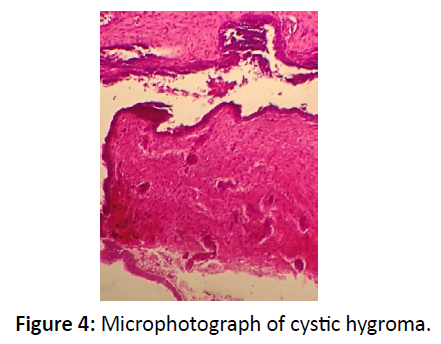 Cystic hygroma (CH) is a benign congenital malformation of the lymphatic system [1]. CH is lymphatic is origin which occurs due to sequestration or obstruction of lymphatic sacs [2]. Almost 80% to 90% of cystic hygromas present itself before the end of second year of life [3]. our reported case was a 5-months old baby boy. These cysts vary in size from a few millimeter to more than several centimeters in diameter [2,3]. The case in our report measured 12 cm X 6 cm. They are classified into septate (multiloculated) or non-sepate (single cavity) cystic lesions [4]. This case report was septate from the ultrasonography report.

However, it be can be misdiagnosed with other cystic neck swellings like: branchial cleft cyst, haemangiomas, dermoid cyst, thyroid mass and other childhood tumours [4,5]. Our case was initially thought to be haemagioma until aspiration biopsy yielded yellow coloured fluid. There are three histological subtypes of lymphangiomas: capillary lymphangioma (composed of small lymphatics), cavernous lymphangioma (composed of large lymphatics), cysticlymphangioma (cystic hygroma-composed of large lymphatics spaces with collagen and smooth muscle) [6]. Our case was cystic lymphangioma. The cyst may contain milky, serous, sero-sangious or straw-colored fluid. The aspirate in this case report was yellowish colored. It is usually a transluminant lesion, however, it may turn opaque when there is hemorrhage or infection in it [3,6- 8]. Our case report was a transluminant lesion. Hygroma are benign lesions, however, sometimes complications can arise such as: haemorrhage inside cyts, infection, spontaneous or traumatic rupture, nerve compression causing pain and paraesthesias, respiratory difficulty, dysphagia, and disfigurement [6,7]. Our case did not suffer any of the above complications. CH is associated with various syndromes such as turner syndrome, Noonan syndrome, and fetal hydrops [8]. Our case did not associate with any syndrome. Microscopically, cyst wall consists of a single layer of flattened epithelium which may or may not contain vascular component, however, in some cases rapid enlargement/ discoloration of the swelling can be attributed to the vascular component [9]. Our case did not show any vascular component (Figure 4). CH has never become malignant [5]. Our case exhibitedfeaturesof a benign lesion. Diagnostic modalities to confirm the diagnosis of CH along with clinical suspicion includes ultrasonography, computed tomography (CT) scan, MRI, which can give the exact extent of the lesion and regarding infiltration into adjoining structures [9,10].Ultrasonography was used in our case to arrive at definitive diagnosis of cystic hygroma. CT scan with contrast is better in localizing the lesion and its extent [7].

Various treatment modalities have been considered for successful treatment of CH, these include: injection of sclerosant agents, repeated aspiration, injection bleomycin, radiotherapy and surgical exploration [11]. Surgical enucleation under general anesthesia was done for our case (Figure 3). Due to difficult and challenging surgical procedure owing to multicystic nature of the lesion, with thin wall and proximity to vital neurovascular structures, many non-surgical options have been advocated such as: injection of bleomycin or sclerosants [12,13]. A study by Alqatein et al., reported spontaneous regression of the lesion which often associated with recurrence and hence is not valid treatment for CH and they concluded that surgical excision of the lesion should be considered in all cases [12]. Several authors combined sclerotherapy and surgical excision for cystic hygroma extending to major vessels or vital structures [13,14].

Midwives, gynaecologists’ and birth attendants needed to carefully examine the neck of all newborns for early detection of cystic hygroma.

Declaration of Patient Consent: The consent to use patient images was obtained from the parents.

Conflict of Interest: None