Immune responses, ischemia-reperfusion injury and hyperglycemia induces cardiac fibrosis via activating the renninangiotensinaldosterone system, the collagen proteins generation and depredating cytokines production [7]. Thus, investigation of the pathogenesis and molecular mechanisms of cardiac fibrosis is necessary for the severe cardiovascular events prevention and treatment.

Transforming growth factor (TGF)β1 has been regarded as a multifunctional peptide [8]. TGFβ1 has a key role in various biological activities, especially in the cardiovascular system [9,10]. TGFβ1 modulates the transformed phenotype of fibroblasts and elevates the generation of collagen proteins and fibrosis [11-13].

Previous studies have also confirmed that TGFβ1 inhibits the activity of matrix metalloproteinase and inhibits ECM degradation in prostate cancer (PrCa) cells [14]. Specifically, TGFβ1 is involved in the modulation of multiple transduction pathways and directly stimulates the proliferation of CFBs [15,16].

The previous studies demonstrated that the CXCR4 plays a key role in the pathogenesis of CFBs [20]. CXCR4 antagonist AMD3100 promoted wound healing in diabetic mice by increasing cytokine production and elevating the activity of fibroblasts [21].

Many studies found that TGF-β1 regulates CXCR4 expression in both mRNA and protein level, which then affected stem cell migration and adhesion [22,23]. However, whether TGF-β1 induces proliferation and migration of CFBs by CXCR4 remains unclear.

The aim of the present study was investigated whether treatment with AMD3100 could abolish the alterations in CFBs and ROS generation induced TGF-β1 and the molecular mechanisms that underlie the protective effects of AMD3100 on CFBs function with the suppression of the ROS pathway.

CFBs migration was determined by using transwell culture plates with 8.0 μm pore polycarbonate membrane (Corning Costar, Cambridge, MA, USA). CFBs (2 × 104 cells/well) was seeded to the upper insert, the lower chamber were added 500 μL of DMEM medium containing TGF-β1 with different concentrations (0-20 ng/ml) at 37°C in a humidified, 5% CO2 atmosphere for 12 h. Then, the DMEM medium was removed from the upper insert and non-migrated cells were removed by scraping. The migrated cells were stained with Calcein-AM at 37°C in the dark for 30 min. Migrated cells were quantified with a light microscope (200x magnification, Carl Zeiss Microimaging, Thornwood, NY, USA).

CFBs (2 × 104 cells/well) were suspended in 6-well plates (Thermo Fisher Scientific, Waltham, USA) at 70-80% confluence. Then 24 h later, the cell monolayer was scratched with a yellow pipette tip. TGF-β1 (20 ng/ml) and AMD3100 (1 μg/ml) was added to each well. Images were analyzed at 0 and 24 h with a light microscope (Carl Zeiss Microimaging, Thornwood, NY, USA) and the scratch area was measured by the Image-Pro Plus software.

CFBs were incubated with 10 μM 2’, 7’-dichlorofluorescein diacetate (DCF-DA, Sigma-Aldrich, USA) at 37°C for 30 min. The fluorescence intensities of DCF were monitored with a microscope (Carl Zeiss Microimaging, Thornwood, NY, USA) at excitation (488 nm) and emission (525 nm).

All data are presented as the mean ± SD of at least three experiments. Comparisons between two groups were analyzed with student's t-test (SPSS 23.0; SPSS Inc., Chicago, IL, USA). P<0.05 were considered to be statistically significant. 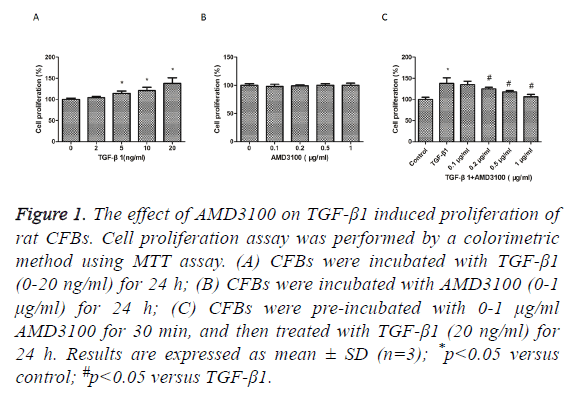 We next detected the effects of TGFβ1 and AMD3100 on migration of rat CFBs by a Boyden chamber transwell assay. TGFβ1 significantly induced CFBs migration (Figure 2A).

AMD3100 treatment did not affect CFBs migration (Figure 2B). However, TGFβ1induced increase in CFBs migration was inhibited by pre-treatment with AMD3100 (Figures 2C and 2D). 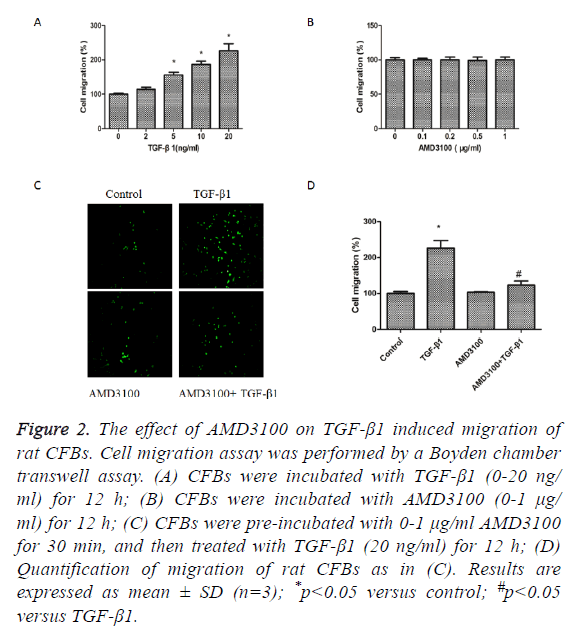 Next, we assessed CFBs migration by scratch assay. In the control group and AMD3100, there were no differences in migration of the CFBs (Figure 3). In the TGF-β1 group, CFBs showed significantly enhanced migration ability (Figure 3). However, TGFβ1 mediated increase in CFB migration was abolished by pre-treatment with AMD3100 (Figure 3), as presented by a wider scratch area. 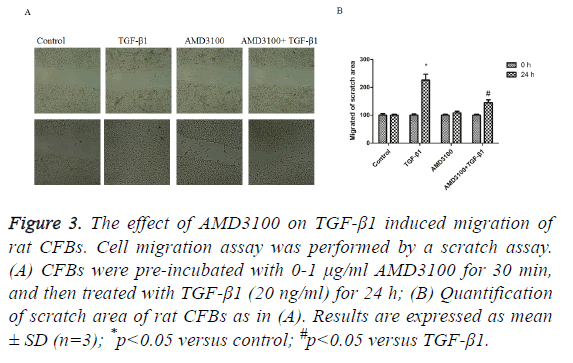 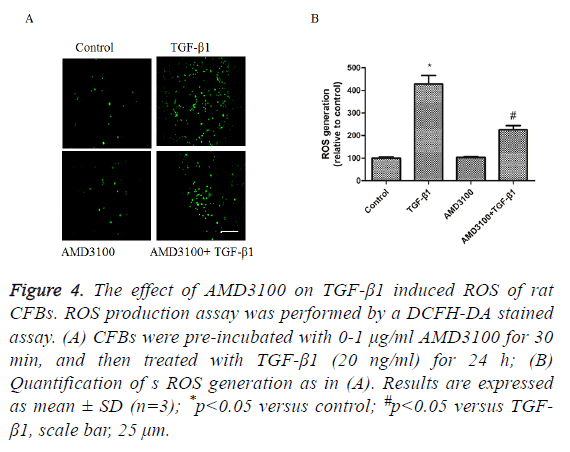 This study demonstrated that AMD3100, CXCR4 antagonist, inhibits TGFβ1 stimulates proliferation and migration of rat CFBs. We also confirmed the molecular mechanisms as the activation of Akt pathway and reduction of ROS generation.

Activation of fibroblasts through proliferation and migration is important in wound healing and maturation of scar tissue after myocardial infarction [24,25]. Thus, the decreased CFBs proliferation and migration in the infarcted area might cause the deactivation of cardiac fibroblasts, which inhibits excessive fibrosis or delays the wound healing and maturation of scar tissue after myocardial infarction. TGFβ1 is an important signaling molecule that induces cardiac fibrosis by activating the proliferation and collagen production of CFBs [26,27]. The excessive TGFβ1 involved in the pathogenesis of maladaptive remodelling and fibrosis [28]. TGFβ1 binds to receptors and induces a number of signal pathways, including Akt signaling pathway. TGFβ1 also induce ROS generation, which activate the Akt signaling pathways [29]. So Akt signaling pathway has an important role in pathogenesis of CFBs.

In previous studies, the results demonstrated selective antagonism of the SDF-1/CXCR4 pathway reversed the development of cardiac fibrosis and left ventricular hypertrophy in the mice diabetes model [30]. In this study, AMD3100 had no effects on proliferation and migration in rat CFBs. It is thus suggested that AMD3100 has no cytotoxicity on rat CFBs. However, AMD3100 significantly inhibited TGFβ1 stimulates proliferation and migration in rat CFBs.

In conclusion, we revealed for the first time that AMD3100 attenuates TGFβ1 stimulates proliferation and migration of rat CFBs, at least partly via the activation of ROS pathway. These findings implied that CXCR4 might trigger cardiac fibroblast abnormal alteration and induce the process of cardiac fibrosis.

The authors did not report any conflict of interest.