Carotid artery stenosis or occlusion is common, involves the internal carotid and middle cerebral arteries, and is frequently caused by atherosclerosis or arteritis [1-3]. Embolic cerebral infarction can occur because of detached plaque or thrombus, and can even result from decreased blood velocity, which acts as a hemodynamic barrier. Timely blood reperfusion can reduce the risk of infarction in patients with carotid artery stenosis [4-6]. Therefore, before surgical intervention, evaluation should be performed to determine whether cerebral ischemia will respond to blood reperfusion after anastomosis. Evaluation of cerebral blood flow perfusion can accurately reflect the blood supply of brain tissue, thereby providing an important reference for design of a clinical treatment plan [7-10]. In this research, we retrospectively analyzed the efficacy of anastomosis in 57 patients with unilateral middle cerebral artery stenosis who underwent surgery; the patients were evaluated before and after anastomosis, using 64-slice Computed Tomography (CT) and Perfusion CT (PCT).

The frontal, central, and posterior white matter in the half-oval central layer was assessed for Cerebral Blood Flow (CBF), Cerebral Blood Volume (CBV), and Mean Transit Time (MTT) in the bilateral internal carotid artery supply area. Results for the paretic side were compared with the computer-generated relative values of rCBF, rCBV and rMTT at corresponding locations. Each Region of Interest (ROI) measured about 100 mm2. When obtaining the ROI, one should confirm the infarct area and large blood vessel supply region. Bilateral absolute values before anastomosis and relative values before and after anastomosis and recovery of perfusion should be compared in the ischemic areas.

Before surgery, rCBF and MTT were determined for the arterial distribution and watershed areas on the paretic and unaffected sides. Analysis of variance showed the following: (1) There was no significant difference in regional cerebral blood flow in all patients (P>0.05), indicating no obvious abnormality in flow on the paretic side; (2) MTT in the middle cerebral artery distribution on the paretic side was obviously delayed (P<0.05), indicating perfusion delay in the two areas (Figures 1 and 2). 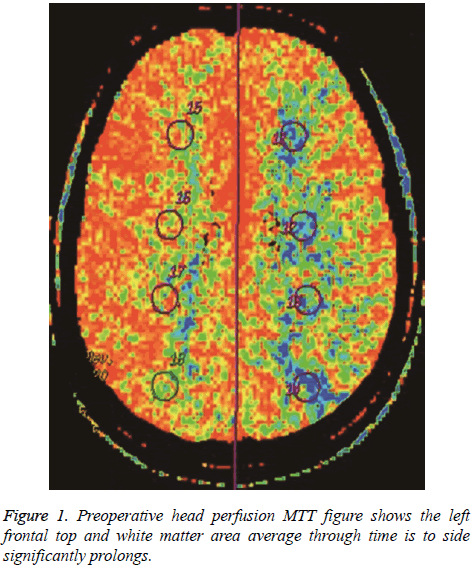 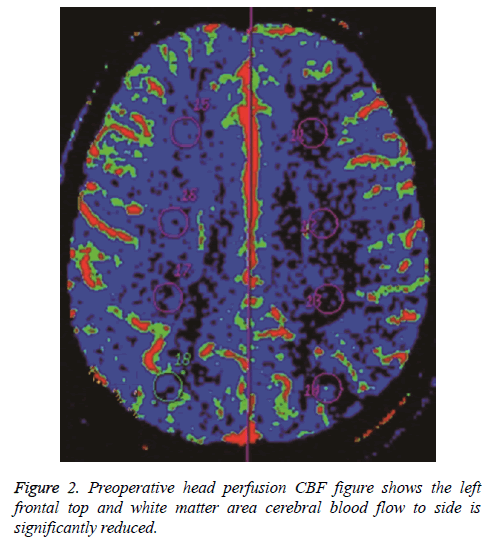 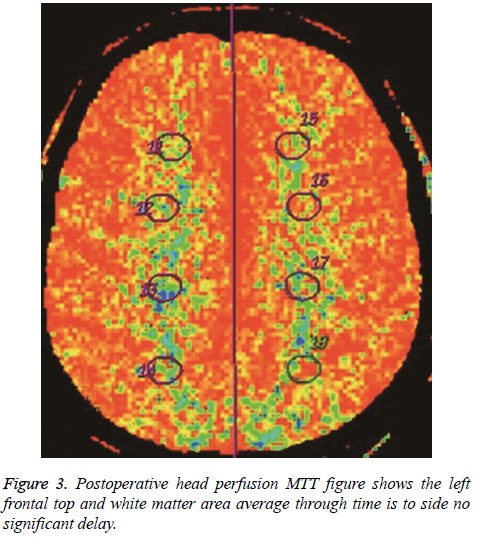 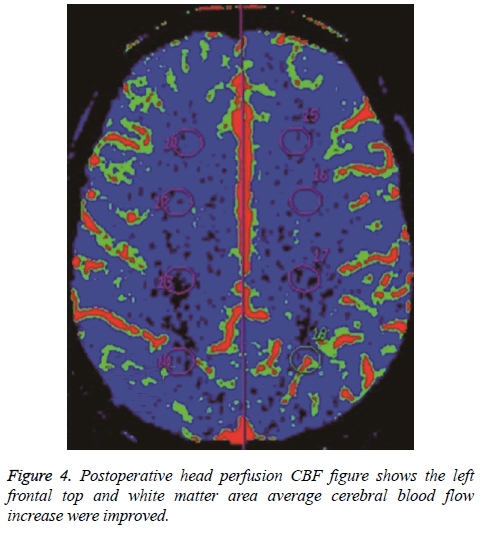 The use of intracranial and extracranial vascular anastomosis in the treatment of carotid artery stenosis has increased. The efficacy is indirectly evaluated by improvement in clinical symptoms. This method is limited by subjectivity. Therefore, a more objective method should be used to evaluate treatment efficacy by performing an evaluation of microvascular cerebral blood flow. The clinical application of PCT has fulfilled this need. With the emergence of multilayer spiral CT and improvements in computer processing technology, the assessment of perfusion scans and parameters has received increasing attention. PCT can evaluate the blood supply in local brain tissue and enables semi-quantitative analysis of the extent of ischemia.

Meanwhile, compared with nuclear and magnetic resonance perfusion imaging, CT perfusion imaging provides goodquality images, accurate measurements, and good reproducibility. Although no obvious clinical symptoms were observed, the extent of restricted CBF in the middle cerebral artery distribution was slightly reduced, possibly because CBF was still adapting to changes during progression to ischemia. Research shows that when the blood flow rate in brain tissue is maintained at 46 ± 24 ml/100 g/min, patients will not show clinical symptoms of cerebral ischemia [13].

However, constant low perfusion in brain tissue will lead to long-term ischemic restriction of brain cells, resulting in neurological symptoms, including depression and cognitive deficits. The foundation of treatment lies in recovery of cerebral blood flow perfusion. Timely intracranial and extracranial vascular anastomoses can improve or even reverse symptoms [14,15].

In addition to the slight decrease in CBF, this research showed that MTT in middle cerebral artery stenosis was significantly prolonged. MTT can more accurately reflect the extent of ischemia and effect on brain tissue because MTT is negatively correlated with cerebral perfusion pressure [16].

According to the formula CBF=CBV/MTT, CBF is inversely proportional to MTT and proportional to CBV. In the early stages of ischemia caused by arterial stenosis, the decrease in CBF perfusion and impairment of cerebrovascular capacity leads to prolongation of MTT. Therefore, CBF remains within normal limits. When CBF perfusion is reduced to a degree that surpasses cerebrovascular capacity, CBF will be reduced [17]. Therefore, MTT is an early and sensitive indicator of impaired CBF perfusion [18]. Meanwhile, vascular expansion can lead to an increase in CBV. CBV will decrease when stenosis is increased, and collateral circulation cannot compensate for the deficit. As a result, CBV cannot be used for evaluation of early stages of ischemia.

Although CBV cannot reflect acute ischemia in brain tissue, the rCBV in the bleeding area in 6 patients was greater than average. This was caused by excessive vascular expansion caused by persistent ischemia. When blood circulates, the active oxygen and Ca2+ released during perfusion can damage the endothelium, which leads to vascular permeability or even microvascular rupture [19]. Therefore, high CBV in the central area of pathological change could be used as an index of the severity of ischemia and can predict complications and bleeding after surgery.

As a common method of evaluating local cerebral blood flow, CT is used to measure the perfusion value of CBF and other parameters before and after surgery. In practice, there are many advantages in the evaluation of CBF with CT perfusion, which can be performed immediately following regular CT examination. The method is easy to perform and master. The scanning and image processing time are relatively short. By using perfusion software for processing, image data after dynamic scanning can be rapidly transformed into several parameters. Therefore, the location of cerebral ischemia at an early stage and the extent of pathology can be determined. However, this technique makes measurement of cerebral blood flow in the cerebellum or brainstem difficult and is associated with increased radiation exposure [20]. Despite some deficiencies, PCT is still considered an effective method for examining CBF perfusion in patients with middle cerebral artery stenosis. Quantitative analysis can be used to objectively evaluate the treatment efficacy of middle cerebral artery anastomosis. CBF perfusion is used for routine evaluation of patients with suspected cerebral ischemia and for evaluation of circulation after treatment.