Cronkhite-Canada Syndrome (CCS) is a rare, non-hereditary disease characterized by gastrointestinal polyposis associated with diarrhea and epidermal manifestations, such as hyperpigmentation, alopecia, and onychodystrophy. The pathogenesis of CCS is still not well understood but it probably involved autoimmune mechanism. Herein, we here report a case of steroid-responsive CCS in a male patient whose polyps presented with IgG-4 positive plasma cells.

A 66 y old male farmer with no medical history of any systemic diseases had a 2 y history of non-bloody watery diarrhea associated with weight loss (more than 10 kg within 6 months). He defecated 6 to 8 times daily. He received upper and lower endoscopic examination, abdominal computer tomography, and small bowel barium series in the other hospitals, but there was no definite diagnosis. Endoscopic examinations revealed polyposis in both the stomach and colon. Pathology of the polyps showed inflammatory change without malignant change. Clinical symptoms were not alleviated after long-term proton pump inhibitor and mesalazine therapy. He had no family history of polyposis, malignancy of gastrointestinal tract, and he did not have fever and abdominal pain.

His vital signs were normal on examination. General skin hyperpigmentation and dystrophic nails were found (Figure 1), but no oral pigmentation. Laboratory results revealed low level of serum albumin (2.7 g/dL, range: 3.8-5.3 g/dL) and cholesterol (100 mg/dL, range: 122-200 mg/dL). The erythrocyte sedimentation rate was elevated (42 mm/h, range: <15 mm/h), and the C reaction protein slightly increased (0.847 mg/dL, range: <0.3 mg/dL). Serum IgG was within normal range, and anti-nuclear antibody was negative. Gastroesophageal endoscopy found diffuse mucosal erythematous gastric mucosa with fold thickening and numerous semi-pedunculaed and sessile polyps with variable size at the cardia, body, antrum, and duodenal bulb with the exception of esophagus. Ileo-colonoscopic examination showed multiple erythematous sessile and semi-pedunculated polyps with variable size from ileocecal valve, cecum, to the left side colon (Figures 2A and 2B). Multiple EMR and polypectomy from the gastric and colon polyps showed retention polyps with cystically dilated glands filled with mucus in an edematous and inflamed lamina propria mainly composed of plasma cells, neutrophils, and eosinophils. IgG4- positive plasma cells were seen with uneven distribution (Figure 3). Focally, the number of IgG4-positive plasma cells was up to 30 in one high power field. The IgG4 to IgG-positive cell number ratio was around 40%. Helicobacter pylori was negative. 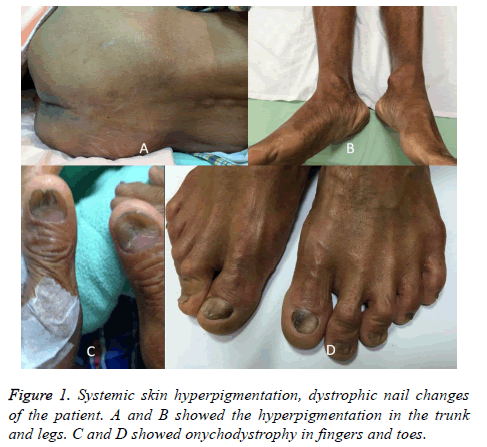 Figure 1: Systemic skin hyperpigmentation, dystrophic nail changes of the patient. A and B showed the hyperpigmentation in the trunk and legs. C and D showed onychodystrophy in fingers and toes. 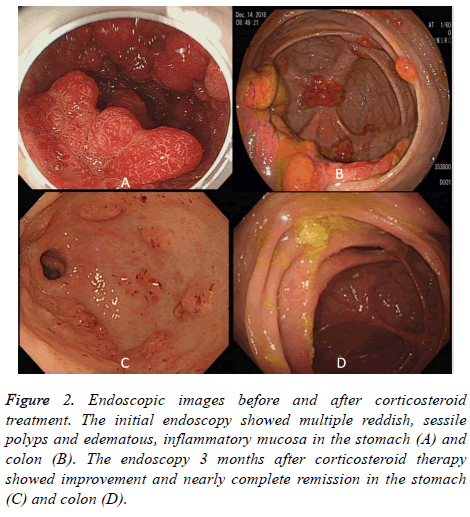 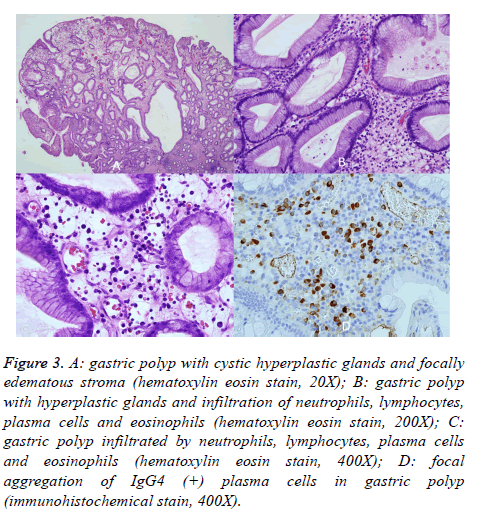 Combining the polyposis, ectodermal manifestations, and clinical symptoms, he was diagnosed with Crokhite-Canada syndrome. The patient was treated with daily oral prednisolone 30 mg per day and then tapered over 3 months. The frequency of diarrhea was reduced and he gradually gained his body weight. The follow-up endoscopy 3 months after corticosteroids showed marked improvement in the stomach and colon polyps (Figures 2C and 2D). However, several tubullovillous adenomas were found in the left side colon which was removed by EMR. His nail change and skin hyperpigmentation also improved after 12 months treatment.

Cronkhite-Canada Syndrome (CCS) is a rare and serious disease with high mortality rate. The mean age of onset is estimated to be in the sixth decade, with a slight male predominance 3:2 in ratio [1-3]. However, early onset in a young man in his age 26 had been reported [4].

CCS is characterized by diffuse polyposis in the GI tract in associated with ectodermal changes, such as alopecia, onychodystrophy, skin hyperpigmentation [5]. The principal symptoms of CCS are diarrhea, weight loss, abdominal pain, taste abnormalities, and other gastrointestinal complications, such as protein-losing enteropathy and malnutrition [6]. Diarrhea is a common symptom in CCS and is found in 70% to 78% of patients [7], which is attributable to diffuse small intestinal mucosal injury, but bacterial overgrowth may be contributory. In our case, diarrhea was the first feature to be relieved, and this finding was the same as the finding of Yi Qun et al. [6]. Besides, onychodystrophy and alopecia were also improved later in their case report, as in our case.

GI polyps are found in 52% to 96% of patients and range in location from stomach to the rectum [1], but jejunum and ileum are seldom severely involved [7]. Gastric and colonic polyps were mostly sessile (2-40 mm) with engorged mucosa and rare punctate hemorrhage [7]. Unlike inflammatory bowel disease (IBD), ulceration or scars were not common, but pseudopolyps or cobb-stone appearances in IBD may be confused with CCS.

In the histologic finding, common features of CCS polyps were focal dilated cystic glands, some filled with proteinaceous fluid and mucus, whereas the others displayed hyperplastic, inflammatory, or adenomatous features. Prominent infiltration of eosinophils, lymphocytes and neutrophils was present in one third [7]. These polyps are harmatomas similar to the juvenile (retention) polyps, but unlike juvenile polyposis, the mucosa between the polyps is histologically abnormal, with edema, congestion, and inflammation. To consider gastric infection, H. pylori may also coexist (54%) [7]. There were several reports suggesting the strong associated of CCS with IgG4-related disorders, but in the case series, the rate of IgG4-positive plasma cells was low and the immune dysregulation of crypt cells differentiation was proposed [7,8].

The 5 y mortality rate was reported to be 55%. Potential fatal complications include malnutrition, infection, and developing gastric and colorectal cancers [9]. Delay in diagnosis is common primarily due to non-familiarity of physicians with this rare entity or nonspecific manifestation of early CCS which lead to poor outcome. Though the etiology of CCS remains obscure but immune dysregulation may be important, given the increased IgG4 mononuclear cell staining in the CCS polyps [10]. Optimal therapy of CCS is not known because of rarity of the disorder. Combination of corticosteroids and nutritional support appears to lessen symptoms. In the Japanese experience, a greater than 85% response was observed with dosages exceeding 30 mg/d, dosing at 30-49 mg/d appeared optimal [7]. The total treatment duration is also not evidenced-based, some recommended a range from 6 to 12 months [7,9-11]. Relapse was common with steroid tapering, and long-term maintenance therapy by azathioprine may decrease its recurrence [12]. In view of supports of the immunologic basis for CCS, cyclosporine and Infliximab have been used as a treatment for steroid-resistant CCS [13,14]. With appropriate treatment, abdominal symptoms were relieved within a few months, whereas polyp regression often required more than 6 months (averaging 248 d for gastric polyps and 238 d for colonic polyps) [7]. In our case, remission of diarrhea appeared in the first month and this patient had weight gain. After 3 months corticosteroid therapy (prednisolone 30 mg daily), dramatic remission of gastric and colonic polyps was observed.

The rate of CCS-related cancer was lower in the patients with sustained endoscopic remission compared to those with relapses or non-responders [7]. Endoscopic documentation of regression of polyposis is likely to be clinical end point of treatment. Comprehensive endoscopic surveillance is also important, including chromoendoscopy and directed biopsy from irregular polyps, to exclude pre-cancer lesions prone to evolve to invasive carcinoma, although there are currently no guidelines to be followed. In 1999, Watanabe et al. found a case of CCS with triple gastric cancers [15]. Later, Yashiro et al. reported higher incidence rate of serrated colon adenomas (40%) in CCS than in general population (1%) [16]. Among 383 reported cases of CCS in Japan from 1980 to 2011, the prevalence of gastric or colon cancers was approximately 10%-13% [7], and seven cases of adenoma-bearing carcinomatous foci were all early colon cancers detected close to the adenoma. The surveillance interval is empiric, but annual surveillance is recommended to assess mucosal disease activity and to remove adenomas and other premalignant lesions [7].

In summary, CCS is a rare, non-hereditary disease characterized by gastrointestinal polyposis associated with diarrhea and epidermal manifestations. Typical endoscopic findings are edematous GI polyps involving stomach and colorectum with congestion and inflammation. The useful distinguishing feature of juvenile polyps is abnormal appearing edematous and reddish mucosa between polyps. Appropriate medical therapy can alter the natural history of CCS. Oral corticosteroid therapy appeared to be effective. Annual endoscopic surveillance is essential to detect or remove dysplastic or premalignant lesions.