Methods: This retrospective cross-sectional study was conducted on 97 patients diagnosed with cerebral palsy and admitted in children’s Medical Center in 2012. Data were gathered from the archives of the hospital. These data includes patients demographic characteristics like age, gender, causes of hospitalization, duration of hospitalization, total costs, treatment costs, paraclinical costs like echocardiography, tests, EEG, ECG, radiology and hoteling costs. The gathered information was analysed with SPSS, version 20. P value<0.05 was considered significant.

Conclusions: Evaluation the costs associated with this disorder would be helpful in determining required budget and facilitating the lifetime quality of patients and their families.

Cerebral palsy is the most common motor disability in childhood. The term refers to a group of permanent disorders of the development of movement and posture, leading to activity restriction, that are attributed to non-progressive disturbances that occurred in the developing fetal or infant brain (1). Depending on which areas of the brain are affected, CP is classified to four main types: 1. the most common type of CP is spastic CP (stiff muscles) that involves about 80% of patients with CP. Increased muscle tone and awkward movements in this type are evident; 2. Dyskinetic CP involves 10-15% of people with CP. In this type the movements are uncontrollable and muscle tone changes (varying from too tight to too loose); 3. Ataxic CP involves 5% of cases with CP. Cerebellum damage is the cause of ataxia (poor balance and coordination); 4. Some patients have symptoms of spasticdyskinetic CP. In addition to motor disorders in children with cerebral palsy, sensory and cognitive impairments, seizure and behavioral problems are manifested [1-3].

Investigations from Western Australia, Sweden, the United Kingdom and the United States have informed cerebral palsy rates of between 2.0 and 2.5 per 1,000 live births [4-7]. While the total number of children with CP has remained constant [3] or increased since 1970 [5-7], there has been a regular rise in the risk of cerebral palsy related to preterm and post-term infants [4-9]. UCP (United Cerebral Palsy) and CDC (Centers for Disease Control and Prevention) estimated that around 8,000 to 10,000 babies and infants are diagnosed per year with cerebral palsy [10,11]. Nowadays the treatments that are implemented by multidisciplinary teams to improve body movements in patients with CP include physical therapy, orthopedic surgery, seizure control medications, BOTOX injection and hydrotherapy [2,12].

The patients with cerebral palsy require long-term supportive care or services. Taking care of children with cerebral palsy is difficult and costly for their families Average lifetime costs per person estimated at $921,000 for persons with CP The costs include: direct nonmedical costs (costs of home and vehicle modifications, special education) (9.2%); direct medical costs (physician visits, inpatient hospital stays, medications, assistive devices) (10.2%); Indirect costs (value of productivity losses in workplaces and households) (80.6%) [13,14]. The frequent and occasionally long hospitalization of the patients due to the underlying disease or its complications impose a huge burden on their family `s shoulder.

Regarding incomplete investigations concerning hospitalization costs (treatment, paraclinic, hoteling), especially in our country, in this study we aimed to evaluate the cost of hospitalization due to the underlying disease or its complications in children with cerebral palsy referring to Children’s Medical Center in 2012. Total costs and hospitalization costs based on sex and age were measured. This evaluation can be helpful for preparation of essential facilities and estimation of approximate costs.

This retrospective cross-sectional study was conducted on 97 patients with 6.32 ± 4.24 y old diagnosed with cerebral palsy and admitted in children`s Medical Center in 2012. Simple sample selection method with regard to the previous studies was used for determination of sample size.

Patients with cerebral palsy based on paediatrician’s diagnosis and the one that hospitalized in children`s Medical Center in 2012 due to underlying disease or it`s complications were entered into the study. On the other hand, patients without cerebral palsy, causes of hospitalization except underlying disease or its complications and incompetency of patient`s information file were excluded from this study.

The files related to patients with inclusion criteria in 2012 were investigated and data were gathered from the archives of the hospital. These data includes patients demographic characteristics like age, gender, causes of hospitalization, duration of hospitalization, total costs, treatment costs, paraclinical costs like echocardiography, tests, EEG, ECG, radiology and hoteling costs. It should be noted that some hospitalized patients in 2012 were just suspected CP and weren`t old enough to be diagnosed definitely. If the diagnosis was approved in the coming years, these patients would be entered into the study. The gathered data were entered into SPSS software version 20 and then were analysed.

The study was carried out in accordance with the Declaration of Helsinki, the ethics committee of the Kermanshah University of Medical Sciences approved the protocols of the study. The patients were informed about the procedure of the study and written consent was provided. Also, patients were free to leave the study whenever they want.

Qualitative and quantitative data were analysed and reported as frequency (%) and mean ± standard deviation, respectively. P value<0.05 was considered significant. The gathered information was analysed with SPSS, Version 20. The descriptive statistics index which includes prevalence, distribution and dispersion were calculated.

In this survey, 97 patients hospitalized in children`s Medical Center during 2012, with average of 6.32 ± 4.24 y old were studied. The oldest and the youngest patients were 18 y old and one day-old baby boy, respectively. Figure 1A represents dispersion distribution of studied population based on age. 44 of patients (45.5%) are female and 53 of them (54.6%) are male (Figure 1B). The average days of hospitalization were 7.69 ± 10.74. Minimum and maximum duration was 1 and 91 d, respectively (Figure 1C). 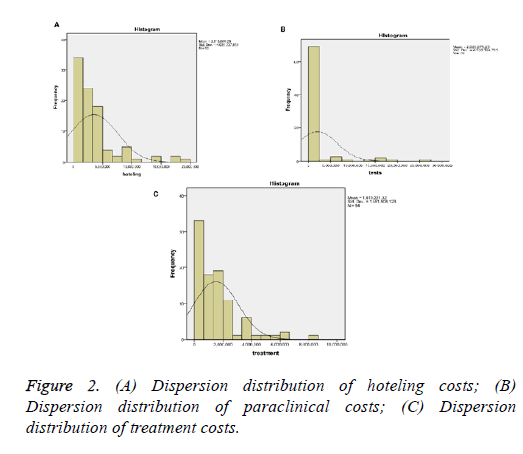 Assessment about costs over the lifespan of individuals with cerebral palsy is limited. In the decade 1990-2000 costs of cerebral palsy were evaluated twice in United States, in 1992 (the costs was estimated $503,000 per case) [15] and in 1994 [16]. In 2000 the average cost of services used by the young adults with hemiplegia CP was calculated £12500 annually [17]. In 2007 Hoving et al. evaluated 40265 Euro as the costs for children with severe CP per annum in Germany [18]. In 2006 another investigation concerning cost of hospitalization, in-patient hospital utilization of children with CP was done. Data about 37,000 children with CP that hospitalized in 1997 were analysed. The expenditure was about 600 million dollars. Children with CP manifested longer lengths of stay (6.3 vs. 4.1 d, p<0.001), higher total costs (16,024 vs. 9952 dollars, p<0.001), more diagnosis (5.6 vs. 3.0, p<0.001) and more procedures (1.7 vs. 1.1, p<0.001) per admission. Patients with CP were transmitted to other facilities (p<0.001) or prescribed home health care (p<0.001) upon discharge. Therefore, hospitalization of children with CP demonstrates a huge expenditure for health care systems. Statistical studies in order to improve the management of conditions and prediction of the costs associated with CP could facilitate children and their family’s situation and decrease charge of the hospitalization [19]. In 2009 a study on lifetime costs of cerebral palsy was conducted in Denmark. Of those individuals with CP, 2367 ones who were born in 1930 to 2000 and were alive in 2000, were analysed. The lifetime costs were divided into three categories: health care costs, productivity costs, and social costs. The lifetime cost of CP was about €860 000 for men and about €800 000 for women. The largest component was social care costs, especially during childhood. Including adults with CP in the labor market would have a beneficial effect on the lifetime costs of CP. The measurement of lifetime costs of CP should be considered to evaluate quality of life in children and adults with CP as the main target [20]. Care improvements in United States have caused enhanced survival of children with Neurological Impairment (NI). Children with NI which includes cerebral palsy account for a fundamental proportion of inpatient resources expended in US and their impact is growing. Therefore allocating budgets to these impairments is challenging [21].

Considering the incomplete investigations about hospitalization costs (treatment, paraclinic, hoteling), especially in our country, in this study we aimed to evaluate the cost of hospitalization due to the underlying disease or its complications in children with cerebral palsy referring to children`s Medical Center in 2012. We divided direct medical costs associated with patients to 3 groups: hoteling costs, paraclinical costs, treatment costs. Eventually we calculated total inpatient hospital costs. The average cost of hospital bed and caregiver hospital stay for all the admitted population in 2012 were calculated 5,276,865 Rials. The average cost of paraclinic which includes echocardiography, tests, radiology, EEG (electroencephalogram), ECG (electrocardiogram) for the total population was evaluated 2,020,075 Rials in 2012 and finally average total cost of hospitalization in studied population was reported 11,751,818 Rials. If we calculate inflation rate based on increase of dollar price, estimated costs for hoteling, paraclinic, treatment and total costs would be 11,609,103 Rials, 4,444,165 Rials, 5,492,669 Rials, and 25,853,999 Rials, respectively. In mentioned study that was conducted in 2006, cost of hospitalization per person, amounted to 16024 dollars for children with cerebral palsy [19]. According to dollar rate that was 9220 Rials in 2006, the estimated cost would be 147,741,280 Rials. If we calculate inflation rate based on increasing of dollar price, the mentioned number equals 528,792,000 Rials in 2012 that is much higher than the one evaluated in present study. In addition, through an investigation in Denmark, hospital costs of patients with CP were estimated about € 52,000 [20]. According to Euro rate that was 13,500 Rials in 2009, the estimated cost would be 702,000,000 Rials. With consideration of the inflation rate the mentioned number equals 1,638,000,000 Rials in 2012. Therefore costs of hospitalization and total costs between previous studies and the present study are extremely different. It should be noted that the data were gathered and were evaluated from the patients that were admitted into public hospital. Thus the costs would be different compared to freestanding children’s hospitals.

On the other hand, adequate levels of Physical Activity (PA) and physical fitness provide psychological and physiological advantages [22,23]. An active life optimizes patient`s physical performance in daily life especially in individuals with CP [24], since patients with CP have low levels of physical fitness [25-28] and high amount of sedentary time [29]. Therefore performing a lifestyle intervention for the patients with CP might be cost-effective or cost-saving rather than represent no intervention to enhance physical behavior and fitness [30].

In conclusion, cerebral palsy is a costly disorder imposing a huge burden on families of the patients and the health care system, as well. Evaluation the costs associated with this disorder would be helpful in determining required budget and facilitating the lifetime quality of patients and their families. The present study attempted to estimate expenditures but further research is required for better outcomes.