Medical expenses have recently been steadily increasing in China. The Ministry of Health of China stated that the total medical expenses of the Chinese government from 2009 to 2011 were 732.6 billion RMB, with an annual growth rate of 30.17%. Therefore, the appropriate use of limited medical resources is paramount. Thoracotomy surgery can cause severe patient morbidity and significantly affects the respiratory and circulatory systems [1]. Thoracic epidural anaesthesia (TEA) combined with general anaesthesia (GA) has also been widely used in clinical practice [2], especially for thoracic or upper abdominal surgeries and high risk patients [3,4]. Thoracic epidural anaesthesia and analgesia (TEAA) remains a preferred technique for the challenging and painful perioperative period of thoracic surgery [5]. TEAA with local anaesthetics has been reported to benefit stable haemodynamics intraoperatively and lessen pulmonary complications postoperatively [6,7]. Efficient analgesia with TEAA also results in early mobilisation, enabling painless ventilation and decreased morbidity and mortality [8]. Epidural block has been argued to increase the cost and risk of thoracic surgery anaesthesia [9]. Costs and benefits are both important for patients. Thus, the cost and effectiveness of TEA combined with GA should be further studied. In this prospective, randomised and double-blind study, the authors aimed to compare the clinical features and costs of TEA combined with GA and GA alone for thoracic esophagectomy. We tested the hospital stay and patient satisfaction as the primary endpoints and time to extubation, intraoperative anaesthetic dosages and fluid transfusion, postanaesthesia care unit stay, visual analogue scale score and anaesthesia-related complications as the secondary endpoints.

This study was an open-label, randomised and controlled clinical trial. Following IRB approval (Zhongshan Hospital, Fudan University), a total of 80 patients [18 years old to 65 years old; body mass index of 18-30; American Society of Anaesthesiologists (ASA) physical status I and II] undergoing selective thoracic esophagectomy were enrolled in this study. The exclusion criteria included dysfunction of the heart, liver or kidney, electrolyte disturbance, neuromuscular disorder, immune disease, endocrinological disorder, drug allergy and contraindications for TEA. The patients were removed from the study if: 1) postoperative mechanical ventilation or sedatives were required or 2) a second surgery was required during the study. The patients were randomised using a random number table to receive TEA combined with GA (TEA group) or GA alone (control group). This study was conducted in accordance with the declaration of Helsinki. This study was conducted with approval from the Ethics Committee of Zhongshan Hospital, Fudan University. Written informed consent was obtained from all participants.

An epidural catheter was placed at the T7-8 interspace in the TEA group, and the analgesic effect was confirmed. Anaesthesia was induced intravenously in both groups with fentanyl (2 μg/kg to 3 μg/kg), propofol (1.5 mg/kg to 2 mg/kg) and succinylcholine (1 mg/kg to 2 mg/kg). A left-sided, double-lumen thoracostomy tube (Batch number: USA0604-2005; male, #37; female, #35) was inserted and confirmed by bronchofiberoscopy. Anaesthesia was maintained with sevoflurane (Baxter, Deerfield, USA; batch number, 00784 S046F712) at 0.7 to 1.1 minimal alveolar concentration (MAC), and muscle relaxation was provided by vecuronium bromide. In the TEA group, additional 5 mL epidural doses of bupivacaine 0.25% and adrenalin (1:2,000,000) were administered at 1 h intervals. Heart rate, arterial blood pressure, central venous pressure, pulse oximetry (SpO2) and bispectral index (BIS) were monitored intraoperatively (Aspect Medical Systems, Mansfield, USA). BIS was maintained between 40 and 60, and the heart rate and arterial blood pressure were maintained within 20% of the preoperative values. Additional fentanyl and vecuronium were used as needed. Patient-controlled analgesia was used after extubation with IV doses of morphine in the control group (continuous 0.6 mg/h to 1 mg/h, bolus 2 mg to 3 mg, 300 mL total) and epidural analgesia in the TEA group (bupivacaine 0.125% + morphine 20 μg/mL, continuous 3 mL/h to 4 mL/h, bolus 3 mL to 4 mL, 300 mL total). The patients were monitored postoperatively in the postanaesthesia care unit (PACU) and returned to the ward when the Aldrete score was ≥ 9.

The primary endpoint of this study investigated whether TEA combined with GA would improve the hospital stay and patient satisfaction indicators. The secondary endpoints focused on whether this kind of anaesthesia would affect time to extubation, intraoperative anaesthetic dosages and fluid transfusion, PACU stay, visual analogue scale (VAS) scores at 4 h and 1 d to 5 d postoperative and anaesthesia-related complications. The patients were asked to answer a questionnaire with 10 questions to assess their satisfaction scores before being discharged from the hospital (0=most unsatisfactory, 10=most satisfactory).

The documented expenses did not cover the operation room routine costs, medical staff salaries or depreciation expenses of the monitoring equipment. We only calculated the direct medical expenses, including bed, treatment, medication, laboratory test, surgery and anaesthesia expenses. As both groups had similar types of surgical procedures with assumptions of similar costs, surgery costs were excluded. The bed costs were calculated for each patient based on their length of hospital stay. The treatment costs referred to all costs of treatment given in the ward. The anaesthesia expenses included intraoperative anaesthetic expenses (costs of anaesthetic procedure, materials, monitoring and drugs) and postoperative anaesthetic expenses (costs of analgesic pump, analgesic drugs in the pump, additional analgesic drugs, antiemetics in the pump and additional antiemetics). The costs of sevoflurane were estimated by calculating the product of cost per MAC hour and surgery time. All estimated costs per MAC hour were based on a duration of 60 min and the following formula: Cost per MAC hour (RMB)=[(Concentration) (FGF) (duration) (MW) (cost/mL)]/[(2412) (D)], where FGF is the fresh gas flow rate in L/min, MW is the molecular weight in g, cost per mL is in dollars based on the average wholesale price and D is the density in g/mL. Sevoflurane calculations were based on a concentration of 2.05%, MW of 201 g and density of 1.51 g/mL [10].

Sample size determination was based on data from our preliminary experiment. We calculated that a sample of at least 68 patients would need to be enrolled to achieve 80% power (α=0.05, β=0.2). We chose 80 patients for this study to avoid off cases. The continuous data were represented as mean ± SD and compared using the student’s t-test. Non-parametric data were analysed using the Kruskal-Wallis rank sum test, and categorical data were analysed using the Pearson’s Chi-square test. A P value>0.05 was considered to indicate statistical significance. Statistical analyses were conducted using SPSS 11.5 (SPSS, Chicago, IL).

Eighty patients scheduled for thoracic esophagectomy were enrolled in this study. Table 1 summarises the demographic and clinical characteristics of the study population. No significant differences were found between the two groups in terms of age, sex, height, weight and ASA physical status (P>0.05).

Table 2 summarises the anaesthetic dosages, crystalloid and colloid fluid transfusion, blood loss and urine volume during the operation. The doses of fentanyl, propofol, vecuronium and sevoflurane in the TEA group were significantly decreased compared with those in the control group (P<0.05). 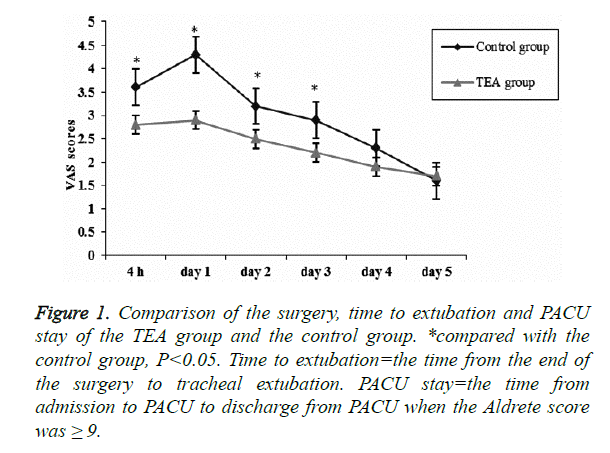 Comparison of expenses between the two groups

In our study, the incidence of pruritus was 60% (24/40) with epidural dose of morphine and 25% (10/40) with IV doses of morphine, which was consistent with the findings of previous studies [15]. However, the symptoms in both groups were mild, and no intervention was needed. Intravenous use of morphine can lead to dizziness and hypersomnia, which are closely related to the blood concentration of morphine. Epidural use of morphine can significantly decrease the frequency of these side effects. We also found that the TEA group had fewer patients with dizziness and hypersomnia, and thus had significantly higher patient satisfaction. Postoperative nausea and vomiting (PONV) served another important function in patient satisfaction and cost. PONV was reportedly as unbearable as postoperative pain, and 78% of the patients were willing to pay $61 to $113 in the prophylactic treatment of vomiting to improve the postoperative recovery [16,17]. PONV did not differ significantly between the TEA group and the control group in this study. The reasons might be that: 1) male patients predominated in both groups, 2) thoracic surgery was not a risk factor for PONV and the surgical time did not differ significantly between the two groups and 3) sevoflurane and opioids were used in both groups.

Our observations suggest that the TEA group had significantly shorter time to extubation compared with the control group, which might have resulted from the lower dose of sevoflurane, muscle relaxants and analgesics used during the operation. TEA was reported to have potential sedative effects and could decrease the dose of sevoflurane required in general anaesthesia [18,19]. The local anaesthetics used in TEA can diffuse through the dura and spread cranially, directly affecting the central nervous system and resulting in decreased MAC [20-22]. Meanwhile, decreased doses of muscle relaxants and analgesics can minimise the postoperative muscle relaxation and respiratory inhibition, resulting in prompt and smooth emergence. This scenario might also be the reason why the TEA group had significantly shorter PACU stay compared with the control group. High turnover rates in the PACU can improve the utilisation efficiency of the operation room and the medical staff schedules, especially when high workloads are expected [23].

According to our results, the TEA group had significantly increased intraoperative anaesthetic procedure costs because of epidural block. The use of epidural anaesthesia reduced the drug doses and thus decreased the drug costs. Earlier extubation in the TEA group caused lower monitoring costs. Patients in the control group had higher VAS than those in the TEA group until day 3 after surgery. These patients had to pay more for analgesia pumps, antiemetics and additional analgesic drugs, such that their postoperative expenses were significantly higher than those of patients in the TEA group. Bed costs were closely related to the length of hospital stay. Mean hospital stay can determine the medical costs and is also a direct indicator of the efficient use of medical resources [24]. The efficient use of medical resources is an important aspect of any treatment regimen [25]. Shorter hospital stays can improve the bed utilisation and turnover rates, is effectively minimising the costs of hospital resources. In agreement with our findings, previous work has demonstrated that TEA and postoperative epidural analgesia can significantly decrease the frequency of perioperative adverse cardiac events and lung infections, leading to shorter hospital stays and better prognoses [26]. Our study consistently found that the TEA group had two days less hospital stay compared with the control group, which significantly lowered the medical costs.

Our study has a number of limitations. First, we did not calculate the indirect medical expenses such as the operation room routine costs and medical staff salaries. Second, the observation time was relatively short, and we did not perform a post-discharge follow-up. In the future, we may conduct further research with a larger sample size and a longer follow-up time.

The anaesthetic regimen serves an important function in the recovery and prognosis after esophagectomy. The choice of anaesthesia must not only meet the requirements of the surgery, but also promote postoperative recovery. TEA has higher intraoperative anaesthetic expenses and possible complications owing to the epidural block. However, our results show that TEA does not increase the total medical expenses and results in shorter hospital stay, better postoperative analgesia, less anaesthesia-related complications and improved patient satisfaction compared with GA alone. No severe intraspinal anaesthesia-related complications occurred in this study as well. Hence, TEA combined with GA is a cost-effective anaesthesia regimen for thoracic esophagectomy.