Patients presented with poisoning-related suicide attempts is one of the most problematic cases of the emergency services. The most important reason for this being the failure to decide the department of the hospital in which these patients should be admitted to, following consultation. The objective of this study is to emphasize the cost- lowering effect of treatment and follow-up of such suicide cases in Emergency Departments (ED) instead of intensive care units. A total of 791 adult patients with suicidal attempts were retrospectively examined and their clinical and demographic data were included. In addition, the costs of their treatment in the ED, Intensive Care Unit (ICU) and Psychiatric Clinic between 01/01/2007 and 31/12/2011were compared. When patients were classified by their month of birth it was found that patients who born in January had the maximum tendency to commit suicide (n:227, 28.7%), while those born in December were the least to do so (n:30, 3.8%). Of all the patients, 122 (15.4%) were followed-up in Anesthesia Intensive Care (AIC), 639 (80.8%) in the Emergency Department Observation Unit and 30 (3.8%) in the Psychiatric Clinic.When costs of the patients who could receive the same medical treatment in case of necessity were compared; mean cost of the patients were found to be $ 665.44 for the patients treated in AIC, $ 204.09 for patients treated in EDs and $186.85 for those received treatments in the psychiatric clinic. We defined that it would be profitable if the intoxication cases were followed-up in the ED observation units and that ED’s could be used more effectively than ICUs.

Suicidal behavior is increasing over the years in many countries and is recognized as a universal problem today. According to data from World Health Office (WHO) more than 800,000 persons die by suicide annually [1].

Today, poisoning-related suicide attempts are one of the most common cases of suicides, and this is a sociocultural problem which continues to affect human life in various ways. Intake of medicines for suicide is wide in the developed countries, while accidental poisoning is more common in the other countries. Today, this issue remains important because of both health costs and sociocultural impacts [2-3].

According to 2011 data derived from 57 poison control centers in the USA, approximately 2.3 million poisoning cases (0.74%) have been reported. Of more than 2 million suicide cases which occurred in the USA, 78% were reported to be treated at home without presenting to the Emergency Departments [1].

Despite suicidal attempts being one of the most important problems encountered in the EDs in our country, it is difficult to reach to a reliable morbidity and mortality statistics due to the lack of proper records.

The number of poisoning cases admitted to the EDs account for 0.46-1.57% of all cases [4,5]. Poisoning cases may result in severe outcomes depending on the factors and duration of hospital stay. Some of these patients may require to stay in the ICU for further care following an accurate and effective treatment in EDs [4,6]. Unfortunately since the number of beds are limited in ICUs, it is thought that increasing the number of intermediate intensive care units or emergency observations would result in better and inexpensive service for the follow-up of these patients.

Objective of this study was to reveal our societal lacks resulting from a retrospective examination of suicidal attempts that lead to both heavy medical expenses and sociocultural damage and shed light on the mortality and morbidity data of drug intoxication.

A total of 791 adult patients presented for drug intoxication, hanging, alcohol intoxication and organophosphate drug intake to our ED, between January 2007 and December 2012 were included in the study. All patients had undergone acute treatment and also had consultation with the psychiatry clinic before discharge. They were retrospectively examined and their clinical and demographic data were analyzed. A comparative study was done on the cost of treatment of these patients in the ED, intensive care units and psychiatric clinics.

Anova, t-test, correlation analysis and Roc analysis were used for the continuous data, while Chi-square test was used for the classifications. Descriptive statistics were expressed as the case numbers and percentage (%). The data showing a normal distribution were expressed with mean + standard deviation. Values of p<0.05 were considered statistically significant.

Number of the patients presented to our ED due to suicide is given in Table 1. Among the patients who could receive the same treatment in case of necessity, mean cost of the patients hospitalized in AIC was found as $665.45, in ED as $204.10 and in the psychiatric clinic as $186.85 (Graphic 1). 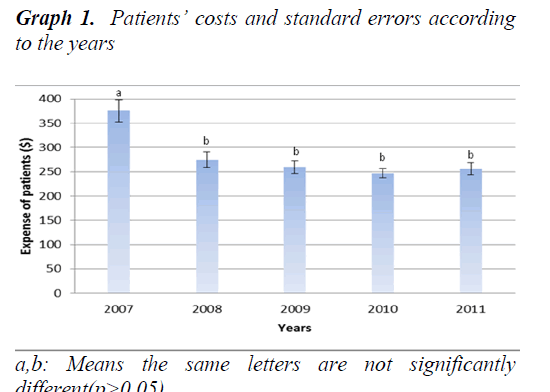 Graph 1: Patients’ costs and standard errors according to the years 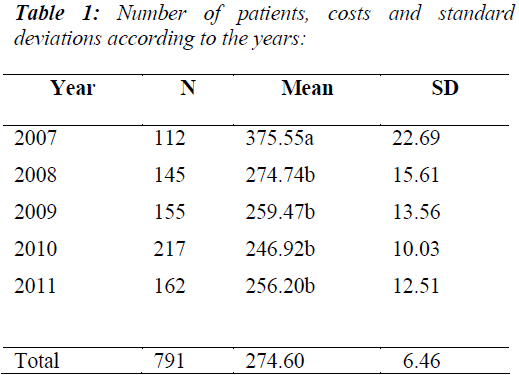 Table 1: Number of patients, costs and standard deviations according to the years:

When suicide attempts were classified according to the months of birth; patients born in January were the most common to attempt suicide (n:227, 28.7%) while patients born in December were the least to do so (n:30, 3.8%). No significant correlation was found in terms of the months and seasons (p>0,05).

When the suicidal patients were classified according to the month of suicidal attempts; most attempts were observed in December (n:83,10.5%) while the least attempts were in May (n:44, 5.6%). This classification was carried out in order to understand whether there was a difference between education season and summer holiday, but no significant difference was found between the months (p>0,05).

Table 2: Distribution of the patients according to the hospitalization services.

When length of stay in ED was analyzed no significant difference was found. Mean length of stay was found to be 2.81 hours and standard deviation as 0.9814 in the patients who were hospitalized in ED.

Table 3: Classification of the patients according to the type of suicide

When the causes of taking suicidal drugs were examined; history was unknown for 8 patients (1%) since they did not answer the anamnesis question, while 738 (93.3%) reported suicidal drug intake and 45 (5.7%) accidental intake. Accidental intakes occurred due to unintentionally intake of hydrochloric acid, bleach and pesticides found in the kitchen or cellar. 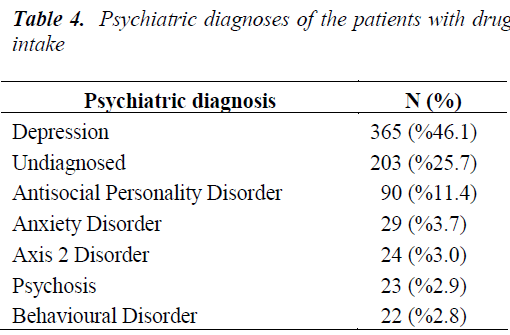 Table 4: Psychiatric diagnoses of the patients with drug intake 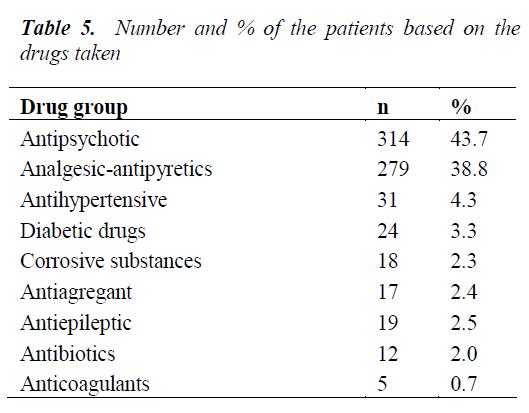 Table 5: Number and % of the patients based on the drugs taken

Correlation analysis carried out yielded a significant correlation between Hb, RDW and MCV in the patients having the diagnosis of depression, while these values were not correlated in the other diagnoses (Table 6).

Table 6: Correlation analysis of Hb, RDW and MCV in the patients diagnosed with depression

Poisoning is a clinical condition developing from taking a drug or a toxic substance via various ways and at a level to damage the body, which occasionally results in death.

Poisoning has been one of the major problems that concerns the society since ancient times [7]. Even if small amounts of any substance; chemical, physical or organic; which is ingested, inhaled, absorbed or injected, results in damage to the structures and impair the functions, this substance is called as poison, and this event is known as poisoning. [8].

There are numerous studies in the literature about the poisoning agents used for suicides. Pekdemir et al. found antidepressant drugs as the the most common agent (16.9%) [10]. In a study by Kaygusuz et al; the most common drug exposure was antidepressants by 46.1% and multiple drug intake by 53.5% [12].In a study by Pınar et al conducted with all age groups between 1989 and 1990; 16.8% were defined as analgesic, 9.7% pesticides, 8.7% ethanol, 7.7% anticonvulsants; 7.0% caustic, 6.0% tricyclic antidepressant, 5.4% hydrocarbon, 5.1% antihist-aminic and 4.7% carbon monoxide poisoning according to the drug substance, while the mortality rate was found as 0.8% [14]. In a 1-year, data review by Özköse et al. with 228 adult poisoning cases; 75.8% of the cases were found to be poisoned, while 29.7% of these cases were found to be through analgesics with 78.9% of these cases were suicidal [19]. In a study by Kurt et al. in Aydın region; 34.7% of the patients who were poisoned intentionally exposed to the chemicals [16]. In a study by Kekeç et al. in Kayseri region; 54.5% of the substances taken in the poisoning cases were drugs and 80% of the patients intentionally exposed to the chemicals [17]. When in our study suicide cases were analyzed in terms of the drug groups; 503 patients (63.6%) have taken multiple drugs, while 288 (36.4%) patients have taken single drug or chemical. Of the drugs taken; 204 (25.8%) were antipsychotic and 135 (17.1%) analgesics and antipyretics. We attributed this to the fact that mental and depressive disorders are becoming more common now-a-days, and that these drugs can be readily obtained from pharmacies without a prescription.

When drug intoxication cases were grouped according to the years; an increase was seen from 2007 to 2010 with a peak value of 217 in 2010 which decreased in 2011. Number of the patients were observed to decrease in parallel to the awareness raising work and increase in the number of psychotherapy work in the hospitals.

1. Use of antidepressants and antipsychotics as suicidal drugs have increased as these are easily found at home.

2. Given the fact that the persons accidentally exposed to dangerous chemicals are mostly the elderly and women; we defined, as a protective factor, that women should be carefully protected from the chemicals they use at home and that dispensing drugs to the elderly, specially neuropsychiatric drugs should be done by their relatives.

3. In numerous studies; differences in female to male ratio and accidental or suicidal intaking of the chemical substances was attributed to regional sociocultural changes and adaptation of the young population to that culture.

4. In our study, we found that a profit of 461.35$ could be made by following-up the patients in EDs and in this way, ICUs could be used more effectively for other patients.

The authors thank the Refik Saydam Hygiene Center of Ankara, Turkey for testing the serum samples, and our colleagues from the Turkish Ministry of Health for their contributions.

No conflict of interest and no funding source to declare.

The study was performed in accordance with the Declaration of Helsinki for Human Research, and was approved by the institutional ethics committee.