Background and Aim: Understanding the correlation between the development of Dysphagia and change in the cervical alignment after cervical spine surgery in patients.

Methods: From 2017 to 2020, 198 patients were treated with anterior cervical decompression and plate fixation where 12 months examination and study follow-ups are undertaken on 172 patients. Along with, the other 154 patients underwent anterior cervical disc replacement where 12 months extensive follow-ups were commenced on 98 patients. The questionnaire was distributed among 270 patients under 12 months follow-ups to investigate the onset and time of appearance of dysphagia, symptoms, relief, treatment plan and other health issues associated, if any. After getting the detailed feedback, all the patients were divided into the dysphagia group and the control group, to determine the excessive cervical lordosis change and other risk factors were associated with the dysphagia symptom or not.

Results: The results showed that 12.8% of patients have postoperative dysphagia in anterior cervical discectomy in fusion group and 5.1% of patients have in cervical disc replacement group. According to the regression equation, the excessive change of C2-C7 angle significantly increases the incidence rate of postoperative dysphagia. It was also observed that, the incidence rate of postoperative dysphagia was significantly greater in patients whose C2-C7 angle change more than 5 degree compare to the patients has less than 5 degree C2-C7 angle. The assessed parameters like Sex, age, BMI, operation time, blood loss, surgery approach, revision ratio, the number of surgical segments, the highest surgical segment, and C3 segment doesn’t affect the occurrence of dysphagia.

Anterior cervical decompression and discectomy, plate and screw instrumentation, bone graft and fusion, (referred to as Anterior Cervical Discectomy and Fusion (ACDF)) are the most common procedure for cervical spondylosis which is proven to be very effective and safe in clinical practices. Also, the patients undergoing ACDF surgery shows the post-operative dysphagia symptoms, a most common complication that occurred in ACDF group varied differently from 4%-71% [1-25], although, very rare cases of severe dysphagia are observed.

Miyata and Neo [3,4] reported that excessive change in O-C2 angle results in the oropharyngeal volume reduction, leads to the severe dysphagia and even respiratory distress after operation, especially during the fusions of the upper cervical vertebrae at hyper flexion position. However, fewer researchers have investigated the impact of change in C2-C7 angle (cervical lordosis) and the occurrence of dysphagia after anterior cervical spinal surgery. Therefore, the present manuscript documented the retrospective case study that investigates the relationship between change in C2-C7 angle and dysphagia. This case study is very helpful for medical practitioners to understand and control certain range of C2-C7 angular variations contributing towards in lowering occurrences of dysphagia after operation. Meanwhile, to further understand the details of other parameters affecting the occurrence of dysphagia, the clinical and operative characteristics of different patients are collected and examined. The clinical data and parameters including gender, age, BMI, operation time, blood loss, type of surgical procedure (anterior/ posterior), revision surgery, number of surgical segments, the superior segment of surgical cite, whether the third cervical vertebrae was included is analysed using Logistic regression method.

All 270 patients participated in the study completed a questionnaire (Bazaz dysphagia questionnaire) [1] during the follow-up including the onset and time of appearance of dysphagia, symptom relief, treatment plan and so on. In order to determine the C2-C7 angular variation and other risk factors association with the dysphagia symptom, 270 patients are divided into two groups: dysphagia group and control group, with 12 months follow-up study. The patient inclusion criterion is as follows:

i) No preoperative dysphagia symptom;

ii) No diagnosis of cervical neoplasm;

v) Patients could make routine follow up by telephone interview;

vii) No diagnosis of schizophrenia or neurotic symptoms;

viii) No diagnosis of oral diseases after surgery.

The patient exclusion criterion is as following:

The patient under investigation undergoes operations through the anterior surgical approach using the Smith- Robinson technique. The surgical approach varied for every patient depending on the operative cervical spinal levels, including left-sided or right-sided methodology. To avoid the recurrent pharyngeal nerve injury, the operative locations lower than cervical lever C6 require the left-side methodological approach, whereas, both left- side and right side methodological approaches could be used in operative levels higher than cervical lever C6. The patients are further divided into two groups, anterior cervical instrumentation (ACDF) group and Cervical Disc Replacement (CDR) group, on the basis of surgical procedures. Instrumentation and implants are performed using plates and screws (AO, Synthes) method on ACDF group (Figure 1A) and Bryan artificial disc prosthesis (Medtronic) method on CDR group (Figure 1B). 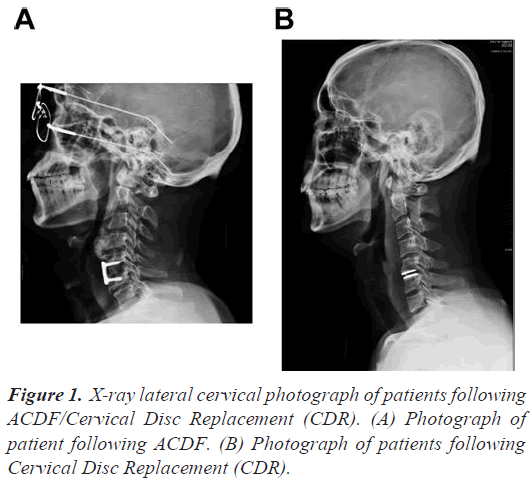 The C2-C7 angular variations, before and after surgery, analysed using radiography of the cervical neutral and lateral views. All the images are captured with the same body position and conditions by experienced technicians.

All the patients undergoes preoperative and postoperative cervical neutral and lateral radiography. The C2-C7 angle is define as Cobbs angle between C2 lower endplate and C7 lower endplate (Figure 2). The variation between preoperative and postoperative C2-C7 angle is expressed as dC2-C7. The measurements of angular indexes in radiographs are calculated using PACS system (GE healthcare, Milwaukee, WI, version 4.0). 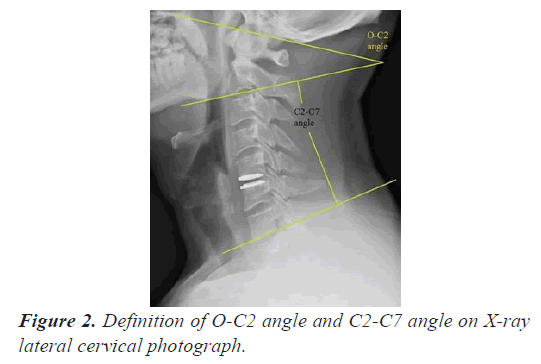 Categorical variables undergoes a descriptive analysis. Continuous variables are presented as Mean ± SD and analyse using Student’s t-test. Chi-square test is performed to examine the involvement of single specific factor with postoperative dysphagia. Binary logistic regression models are used to explore the relationship between postoperative dysphagia and the changes in the angle of cervical spine. The other influencing factors, with the need for dysphagia occurrence (yes/no) as dependent variable and the change between preoperative and postoperative C2-C7 angle, sex, age, BMI, operation time, blood loss, surgery approach (anterior/posterior), proportion of primary surgery (revision surgery), the number of surgical segments, the highest surgical segment, or C3 segment are considered as an independent variable. Statistical analyses are performed using Statistical Product and Service Solutions (SPSS) software (version 19.0, SPSS Inc, Chicago, IL, USA). A value of P<0.05 (two-tailed test) is consider as significant.

Patients with dysphagia are further divided into 3 groups according to Bazaz’s grading system:

i) 11 patients in mild dysphagia group,

ii) 11 in moderate dysphagia group, and

These patients are excluded from schizophrenia or neurotic symptoms. 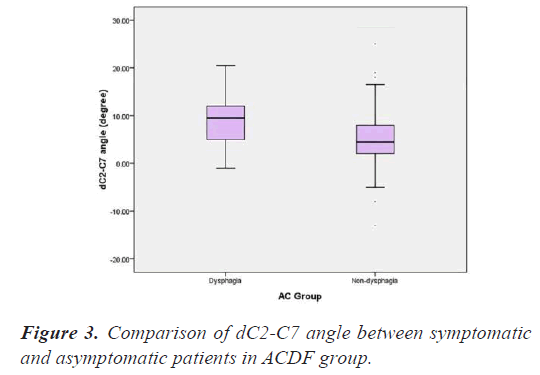 Figure 3: Comparison of dC2-C7 angle between symptomatic and asymptomatic patients in ACDF group. 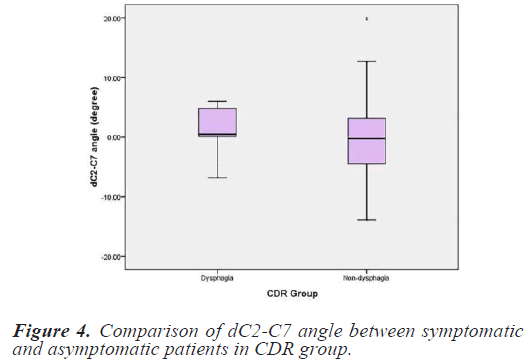 Figure 4: Comparison of dC2-C7 angle between symptomatic and asymptomatic patients in CDR group.

The factors influencing the dysphagia are further examined by multivariate regression analysis. According to the regression equation, the change in dC2-C7 angle (P=0.001 in the univariable analysis) significantly increases the prevalence rate of dysphagia. Meanwhile, the parameters such as, sex, age, BMI, operation time, blood loss, surgery approach (anterior/posterior), revision ratio, the number of surgical segments, the highest surgical segment, or C3 segment does not affect the occurrence of dysphagia (Table 2). Moreover, the prevalence rate of postoperative dysphagia symptoms in patients with dC2-C7 angle more than 5 degree is higher compare to the patients with dC2-C7 angle less than 5 degree (RR 2.85, P=0.002) (Figure 5). 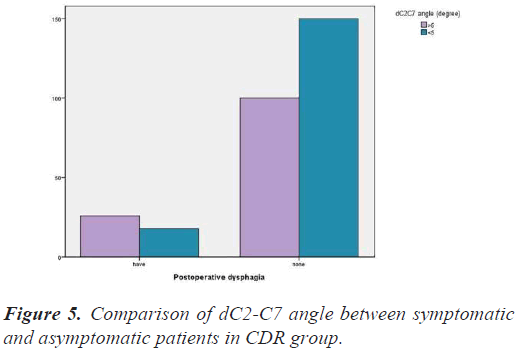 Figure 5: Comparison of dC2-C7 angle between symptomatic and asymptomatic patients in CDR group.

Various researchers have studied the development of postoperative dysphagia after cervical spinal surgery that ranging from 4%-71% [1-25]. In recent years, similar studies have been reported in China. The differences in the development of dysphagia in patients might be attributed to the inclusion criteria, design scheme and statistical method. The results in present study shows that the occurrence of dysphagia is 12.8% (22/172) for the ACDF group patients and 5.1% (5/98) in CDR group patients. Swallowing requires precise coordination of neuromuscular events in different organs, including oral, pharynx, laryngeal and esophagus. The process of swallowing is divided into four parts: the first two named as oral pre-phase and oral phase, are voluntary movements involuntary dominated by human awareness; the other two named as throat phase and esophageal phase are involuntary movements. In cervical spinal surgery, total or partial neuromuscular dysfunction of these parts during any stage of patient life might leads to the symptom of dysphagia after surgical process [2].

The mechanisms involved in the development of postoperative dysphagia after cervical spine surgery are currently in research phase and detailed investigation is still needed. Smith-Hammond [2] consider that the development of postoperative dysphagia might be related to the phases of the throat which is divided into five segments; epiglottis closure, retraction of the base of tongue, extrusion downwards of pharynx, closure and lift of laryngeal, and relaxion of the upper esophageal sphincter. Masahiko Miyata and Neo [3,4] reported that the excessive change in O-C2 angle at occipital-cervical fusion results in the reduction of the oropharyngeal volume, leading to severe dysphagia and even respiratory distress after operation. They further observed that the change in C2-C7 angle, not O-C2 angle, shows significant impact in the occurrence of dysphagia. The result shows that, the dC2-C7 angle is different for symptomatic patients having dysphagia compare to the asymptomatic patients, which is also supported by Logistic regression.

In addition, its observed that the overall occurrence of postoperative dysphagia significantly increases with dC2- C7 angle having value greater than 5 degree, depicting that the surgeon should pay attention in controlling the range of dC2-C7 angle during operation in order to reduce the symptom of postoperative dysphagia. In-line with the research observations of Smith-Hammond [2], its assume that beyond a certain range of dC2-C7 angle, the forward protrusion movements of the posterior pharyngeal wall reduces the oropharyngeal volume, thereby, affecting muscular control of the pharynx compression and laryngeal lift, eventually leads to the development of dysphagia. Although, the direct evidence in support of dC2-C7 angle have not been missing. Hence, this hypothesis explains the mechanism of action of increase in dC2-C7 angle and postoperative dysphagia.

27 patients developed dysphagia after operation, including 22 patients in ACDF group and 5 patients in CDR group. According to the dysphagia classification method proposed by Bazaz et al. [1], 11 patients are graded as ‘mild dysphagia’, 11 patients as ‘moderate dysphagia’ and 5 patients as ‘severe dysphagia’. No direct relationship is observed between dC2-C7 angle and the degree of dysphagia which might be attributed the symptoms of dysphagia are a subjective human experience. Further investigation on the other factors affecting the occurrence of dysphagia, the clinical and operative characteristics are gathered. Logistic regression is performed for analysing the clinical data, including gender, age, BMI, operation time, blood loss, type of surgical procedure (anterior/ posterior), revision surgery, number of surgical segments, the superior segment of surgical cite, whether the third cervical vertebrae is included. No direct relationship is observed between the obtained results and postoperative dysphagia.

The assessment of dysphagia in this retrospective study is based on the subjective experience of the patients. Most of the patients with dysphagia after operation lack anatomical examinations such as, barium meal test, and laryngoscopy. In future, the prospective studies, involving larger group of patients, are required to achieve more concise results and conclusions to further guide the surgical approaches and substantially lowering the rate of postoperative complications.

Dysphagia is well known complication developed after cervical spine surgery. The overall rate of dysphagia development is 12.8% after ACDF procedures and 5.1% after CDR procedures as observed in the investigation. Although, the rate, probability and severity of dysphagia complications reduces with the time. Cervical lordosis change is an important influence factor of postoperative dysphagia after cervical spine surgery. Age, gender, BMI, AC or PC procedures, operative time, blood loss, primary or revision and number of levels operated on does not significantly increases the prevalence of postoperative dysphagia.

The Authors declares that there is no conflict of interest.