Medicinal plants are the oldest known source for the treatment of diseases. The use of plants and plant extracts for isolation of pharmaceutical compounds has received increasing attention from researchers over the past decades. We determined the antibacterial activity of dried black lime (Citrus aurantifolia) extracts on Gram-positive and Gram-negative human pathogens, including Enterococcus faecalis, Staphylococcus aureus, methicillin-resistant Staphylococcus aureus (MRSA), Escherichia coli, Pseudomonas aeruginosa and Salmonella typhimurium by using agar well diffusion methods. Crude extracts were obtained from different organic solvents and from sterile distilled water as an aqueous solvent. Considerable antibacterial activity was observed for the methanolic extracts, particularly against E. faecalis. P. aeruginosa was the most susceptible among the Gram-negative bacteria. HPLC analysis of methanol dried lime extracts revealed a peak with a retention time of similar to that of the standard gallic acid, which is known to have potent antibacterial activity.

Plant-derived products have been used for medicinal purposes for many centuries. Herbs and spices, which are generally considered safe, have proven to be effective against certain ailments [1,2]. According to the World Health Organization, approximately 80% of the global population use herbs to treat ailments, with a lower usage in developed countries than in less developed countries [2]. As bacterial resistance to pharmaceutical agents becomes more common, several studies have focused on the antibacterial activities and potential use of plant-derived products, such as dried lime.

It is well-established that citrus fruits contain a wide range of bioactive compounds, such as phenolics, flavonoids, vitamins and essential oils, which are mainly responsible for the healthbeneficial effects, namely antimicrobial, anticancer, antiinflammatory, and antioxidant activities [3,4]. Lime (Citrus aurantifolia) is a shrub originally native to South East Asia and countries of the Middle East. The constituent flavonoids from the leaves, stem, roots, and flowers are known for their anticancer activity and antibacterial potential [5], antibacterial and antifungal properties [6,7] and anticancer and immunomodulatory effects in humans [8]. A previous study conducted on citrus fruits indicated that the Minimum Inhibitory Concentration (MIC) of lemon (C. lemon L.) peel was found to be 1:20 in the presence of methanol for Pseudomonas aeruginosa and MIC of 1:20 in the presence of acetone for Salmonella typhimurium [9]. Lemon and lime extracts were also found to inhibit the growth of vegetative cells and the spores of microorganisms, although the non-inhibitory concentrations of lemon extracts were found to be very low, at approximately 10 ppm against Bacillus species and some lactic acid bacteria [10]. Another study confirmed the antibacterial activity of lemon against S. aureus, E. coli, and P. aeruginosa, with a mean zone of inhibition of 15-30 mm, which was suggestive of the presence of flavonoids, tannins, alkaloids, glucosides, saponins, and terpenes that are believed to have potent therapeutic activity [10]. Gallic acid, a flavonoid has been validated through an HPLC analysis technique to have a retention time of 3.60 min, which was in agreement with other pharmaceutical studies [11].

Pre-dried lime pieces, dried at room temperature, were purchased from a local market in Riyadh, Saudi Arabia. The dried lime fruit samples were ground into a powder and 10 g was extracted with 100 ml of methanol, acetone, and ethanol, and water. The samples were incubated for 3 d at 27°C in a rotating shaker at 120 rpm (Innova Lumberick, Thomas Scientific, Germany), filtered through Whatman (number 2) filter paper and aseptically filtered through a 0.45 μm filter (Millipore, Merck, USA) [10]. The filter-sterilized DLEs were stored in sterile Eppendorf tubes at -4°C until use.

Antibacterial activity was assayed by using the agar well diffusion technique described by Das et al. [12]. This activity was evaluated through the measurement of the inhibition zone around each well loaded with the extract. Each of the microbial suspensions prepared was loaded on sterile Muller Hinton agar plates surface (Oxoid, UK) by using sterile cotton swabs. The loaded plates were then perforated at equal intervals with a sterile cork borer (diameter, 6 mm). Seventy microliters of each of the DLEs (acetone, methanol, ethanol, and water) was loaded respectively into the appropriate wells. The plates were left to stand for 30 min at room temperature and then incubated at 37°C for 18-24 h.

Antimicrobial activity was evaluated through the measurement of the inhibition zone. All tests were performed in duplicate and the mean size of the inhibition zone was recorded in millimeters. Standard antibiotic discs (Oxoid, UK) of ampicillin (10 μg), vancomycin (30 μg), trimethoprimsulfamethoxazole (25 μg), and tetracycline (30 μg) were used as the positive controls and comparative agents for the study of the efficacy of the DLEs.

Analytical High-Performance Liquid Chromatography (HPLC, Shimadzu, Japan) was used to determine the predominant chemical constituents of the methanol DLE, compared with a standard gallic acid (GA), by separation on a C18 column at 25°C. Briefly, 30 μL of GA and methanol DLE were each filtered through 0.45 μm syringe filters (Millipore, USA). The filtrate was then injected onto the column for a total run time of 45 min, with UV detection at 254 nm. The mobile phase was water: methanol: tetrachloroacetic acid in the following ratio (90:1:1).

The comparison of the antibacterial activity of DLE with that of standard commercial antibiotic discs is shown in Table 1. The average inhibition zone of the methanol DLE was the largest against E. faecalis (28 mm), followed by S. aureus and MRSA, for which the average inhibition zone was 21 mm (Figure 1A). All DLEs used for E. coli resulted in zones of inhibition of between 15 and 16 mm (Figures 1B-1D). The methanol and acetone DLEs used against P. aeruginosa resulted in zones of inhibitions of 26 mm and 25 mm, respectively (Figure 1E). Similarly, the methanol DLE used for S. typhimurium resulted in an 18 mm zone of inhibition (Figure 1F). These data were comparable with that obtained for the standard antibiotic discs, in which the inhibition zones varied between 22 mm and 28 mm, which indicated the potent antibacterial activity of the extracts. 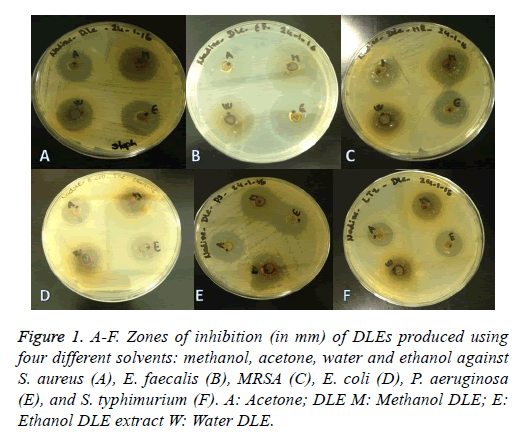 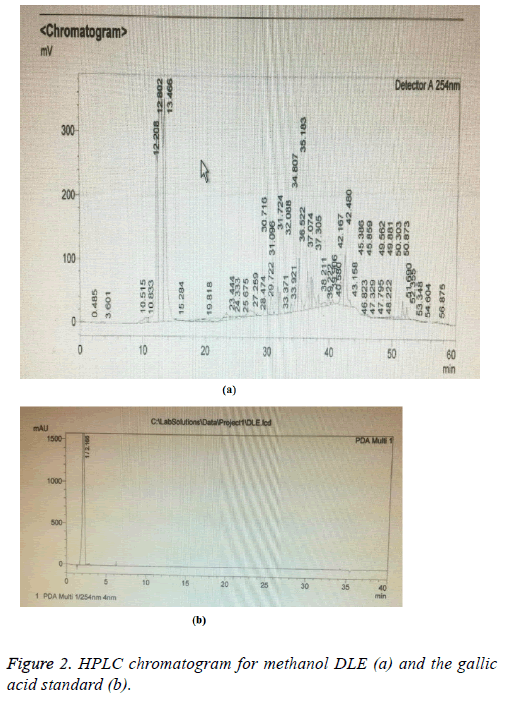 Figure 2: HPLC chromatogram for methanol DLE (a) and the gallic acid standard (b).

Over the past few decades, the antibacterial potential of plantderived extracts has been studied extensively owing to the emergence and increased resistance of several microorganisms to pharmaceutical agents [1,2].

Note: The diameter of the zone of inhibition (mm) is presented as the mean of three replicates. SXT: Trimethoprim-Sulfamethoxazole.

The results obtained in this study indicated that the antibacterial activity of DLEs was highly correlated with the presence of phenolic compounds, particularly gallic acid.

The DLEs, in particular the methanolic extract, exerted significant antibacterial activity against Gram-positive and Gram-negative human pathogens, including S. aureus, E. faecalis, E. coli, MRSA, P. aeruginosa and S. typhimurium. The DLEs were found to contain gallic acid, which may be the cause of their antibacterial activity and may represent a promising lead for the development of a clinical treatment.