Correlation between hyperhomocysteine and serum cystatin C in diabetic nephropathy

The aim of this study was to investigate the changes and correlations of plasma Homocysteine (Hcy) and serum Cystatin C (Cys C) under different urinary albumin excretion rates in diabetic nephropathy. According to the 24 h urinary albumin excretion rate, 90 type 2 diabetes patients were divided into three groups: normal albuminuria group (n=27), microalbuminuria group (n=37), and macroalbuminuria group (n=17); 30 healthy subjects were included as controls. Fasting plasma glucose, glycosylated hemoglobin, triglyceride, cholesterol, serum creatinine, Hcy, and Cys C levels were determined, and the bivariate correlation analysis was used for linear correlation analysis. The Hcy values of the three groups were 8.46 ± 2.72, 9.43 ± 2.13, and 13.52 ± 5.24, respectively; these values were significantly different (P<0.01). The Cys C values of the three groups were also significantly different (P<0.01). As urine albumin excretion and aggravated glomerular filtration function increased, Hcy and Cys C levels also increased, showing a positive correlation (r=0.641, r=0.892, and r=0.765, P<0.01 in three groups, respectively). Combined detection of Hcy and Cys C can be used to predict the impacts of Hcy on glomerular filtration function and degree of renal damage of diabetic nephropathy. Blood Hcy levels should be evaluated at an early clinical stage.

Diabetic Nephropathy (DN) is a major microvascular complication of diabetes and the main cause of end-stage renal disease. With the rapidly increasing incidence of diabetes worldwide and as survival time of diabetic patients is prolonged, the prevalence ratio of diabetes-caused chronic kidney diseases is also increasing each year [1]. In recent years, numerous domestic and international epidemiological surveys have shown that Homocysteine (Hcy) is an independent risk factor of cardiovascular diseases [2]. Hcy has also been linked to neurological disorders [3], aging [4], and all-cause mortality [5]. Most researchers also predict that Hcy is related to the microvascular complications of diabetes [6,7]. Elevated Hcy levels in the blood caused by deficiencies in sulfur amino acid metabolism were reported to be associated with vascular disease [8,9]. Protein homocysteinylation and oxidative stress are directly triggered by Hcy [10]. Hcy is formed during methionine metabolism by S-adenosyl-Lhomocysteine hydrolase, which catalyses the reversible hydrolysis of AdoHcy to Hcy and adenosine. Hcy has emerged as a more sensitive indicator of cardiovascular disease and of microvascular complications of diabetes. Cystatin C (Cys C) is a secreted protein found in cerebrospinal fluid, saliva, urine, and semen. The highest and lowest concentrations are in the cerebrospinal fluid and urine, respectively [11]. Cys C can also freely permeate the glomerulus. After degradation of renal tubular reabsorption, nearly no effect is detected under physiological conditions Cys C stability factor. Cys C is constantly produced via glomerular filtration excretion in the renal tubules that is reabsorbed completely degraded [12]. In many diabetic patients with renal failure requiring renal dialysis, Glomerular Filtration Rate (GFR) in renal clearance can be estimated and the status of renal function can be further evaluated in diabetic patients [13]. Numerous reports confirmed that serum Cys C is an ideal endogenous indicator of glomerular function and can be used as a specific and accurate assessment marker for evaluating glomerular filtration function. Therefore, Hcy and Cys C in type 2 diabetes patients were detected to determine the changes in these indicators at different DN stages and to analyze the relevance of these changes.

Ninety type 2 diabetes patients diagnosed in our hospital from August 2007 to December 2007 were enrolled and met the diagnostic criteria of ADA (2014 edition); 32 cases were male and 28 cases were female, subjects were aged 30-69 years, and diabetes duration was 0.5-18 years. This study was conducted in accordance with the declaration of Helsinki. This study was conducted with approval from the Ethics Committee of Shanxi Medical University. Written informed consent was obtained from all participants. According to the 24 h urinary albumin excretion rate, the patients were divided into three groups: normal albuminuria group (UAER<30 mg/24 h, n=27), microalbuminuria group (UAER 30-300 mg/24 h, n=37), and macroalbuminuria group (UAER>300 mg/24 h, n=17). Three groups were matched for age, gender, and disease duration, and the serum creatinine levels of all selected subjects were<115 M. The exclusion criteria were as follows: had fever, urinary tract infections, or other kidney diseases within the last month, had ketoacidosis or acute complications such as hyperosmolar nonketotic coma, combined with other cardiovascular and peripheral major vascular complications and high blood disease, administrated folic acid, vitamin B12, and vitamin B6 within the past 3 months, administrated metformin, carbamazepine, phenytoin, and diuretics within the past month, others diseases, such as non-diabetic nephropathy-caused renal failure, pernicious anemia, leukemia, thyroid function loss, and psoriasis, which would disturb the metabolism of vitamin B12, vitamin B6, and folic acid, smoking or quit-smoking for less than 1 year, caffeine administration, long-term alcohol consumption and high methionine diet, or had performed regular alternative therapy. Thirty healthy subjects were included as controls, including 10 males and 10 females, aged 30-65 years, without hypertension, cardiovascular diseases, endocrine diseases, or other chronic diseases, and did not take folic acid, vitamin B12, or vitamin B6 for the past three months.

Twenty-four-hour urine specimens were collected from all subjects and preserved in 10 ml benzoic acid. The total amount of urine was recorded after mixing, and a 3 ml specimen was sent for UAER detection; after fasting for 10 h, 3 ml overnight fasting venous blood was sampled, placed in a heparin tube, centrifuged within 1 h of sampling at 4°C to separate the plasma for immediate Hcy level detection, and stored in the cold. Another 3 ml blood was centrifuged within 3 h of sampling and the serum was sent for Cys C determination. 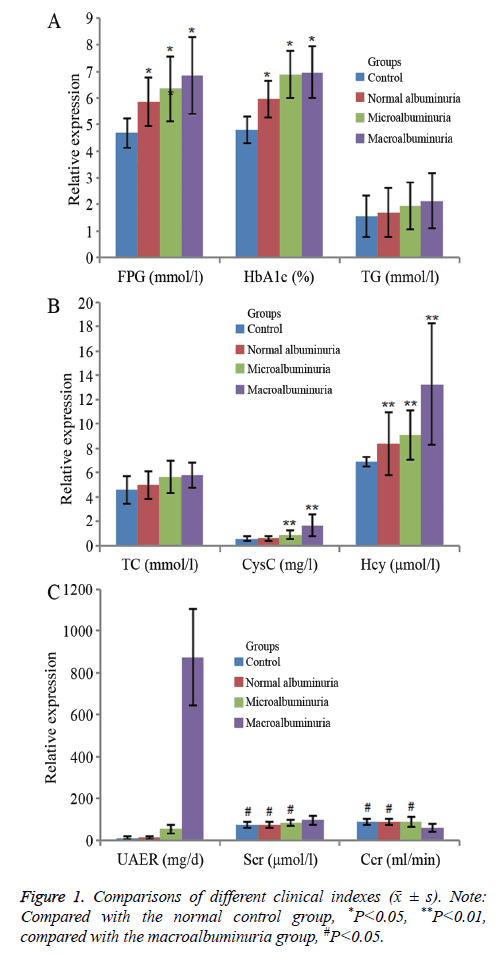 Comparison of Hcy and Cys C 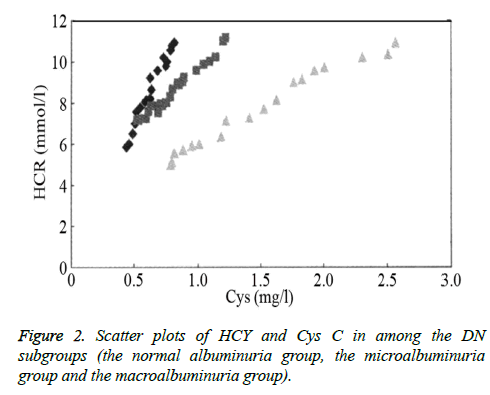 DN has a complex pathogenesis and is a severe microvascular complication of diabetes and the main cause of diabetes-related mortality and mutilation. Epidemiological surveys have shown that the mortality rate of DM patients with DN is 30-fold higher than in those without kidney disease complications; therefore, early diagnosis and treatment of DN is important for improving the quality of life of DM patients [14].

DN is known to be closely related to high blood sugar, hypertension, and high cholesterol. Numerous domestic and foreign studies in recent years have shown that Hcy, as a vascular injury amino acid, is associated with DN. Additionally, Cys C was confirmed to be a sensitive and specific indicator of glomerular filtration function. Thus, we examined the changes and correlation of Hcy and Cys C in different DN periods. Hcy is a cytotoxic and genotoxic endogenous pathogenic factor and may cause blood vessel damage through various mechanisms, thus leading to atherosclerosis [15,16]. The kidney is not only the Hcy excretion organ, but also its metabolic organ. Hyperhomocysteinaemia (Hhcy) would mutually influence renal function impairment in DN patients [17]. Most studies showed that Hhcy was related with UAER and DN and considered Hcy as the UAER factor, independently from hypertension, diabetes, protein intake, and renal function [18]. This study detected Hcy levels during different DN phases and found that with decreased glomerular filtration function, blood Hcy concentrations increased, and Ccr and Hcy were significantly negatively correlated (r=-0. 623, P<0.01).

Cys C is one of the 9 subtypes of serum cystatin C and can freely pass through the glomerular filtration membrane and completely reabsorbs in the proximal tubule but does not return to the blood cycle. However, the renal tubular does not secrete Cys C [19]. Thus, Cys C can be used as an indicator of GFR and is considered a sensitive and specific index of renal functions. Recent studies suggested that the renal clearance rate of Cys C is the same as that of the radionuclide mTc- DTPA. Recently, Rule et al. also evaluated Cys C as a predictor of GFR and found partial improvement in the accuracy of GFR prediction values using this marker [19-21]. Numerous studies have confirmed that serum Cys C concentrations are significantly negatively correlated with GFR. When glomerular filtration function is subjected to minor injury, the blood Cys C concentration increases, gradually aggravating disease situations [22,23]. This study also showed that Cys C was significantly negatively correlated with UAER and Ccr. When Scr and Ccr were normal, Cys C was increased; thus, Cys C may be useful for earlier detection of glomerular filtration dysfunction.

Cys C may be useful for measuring GFR; as a factor involved in DN vascular injury, Hcy can be detected in combination with Cys C to determine the effect of Hcy on GFR, detect early DN damage, and more comprehensively evaluate early diabetic kidney damage from different perspectives. Additionally, detection of this marker may enable early clinical intervention for Hhcy in diabetic patients to reduce DN incidence, prevent and slow DN progression, and help to change the DN course. We found that the Cys C level in the microalbuminuria group was significantly higher than in the normal albuminuria group, indicating that during the early diabetic kidney damage stage, Cys C shows corresponding changes and thus can be used as an indicator for the early diagnosis of type 2 DN. Simultaneous detection of Cys C and Hcy may improve the accuracy of UAER in DN diagnosis. Hcy increases during early DN stages, and Hcy levels were positively correlated with UAER levels, further suggesting that Hhcy is related to the degree of DN microalbuminuria. Thus, with increasing urine albumin, glomerular filtration dysfunction, Hcy level, and Cys C level also increase; Hcy and Cys C showed a positive correlation and were much more significantly correlated during early DN stages.