Neonatal hypoglycemia is a common disease. The occurrence rate of hypoglycemia in healthy full-term child is 1%-5%, and that in small gestational-age and preterm children is 15%-25% [1]. Severe hypoglycemia can cause brain cell death, leading to irreversible brain dysfunction [2]. Harris et al. [3] find that, the neurologic dysfunction caused by hypoglycemia mainly includes the attack of difficulty in motion development, vision, learning and behavior and long-term epilepsy. Infantile spasms are the catastrophic epilepsy syndrome, and the typically characterized seizures include nodding- or huddle-like spasms, Electrocardiogram (ECG) hypsarrhythmia and psychomotor development delay. The prognosis of this disease is poor, which can lead to severe neurocognitive dysfunction [4]. The cause of infantile spasms is not very clear. The patients with infantile spasms are divided into symptomatic cases and cryptogenic cases, and the symptomatic cases account for 60%-85% [5]. Currently, there are more than 200 known etiological factors for infantile spasms, including perinatal cerebral damage, congenital brain abnormality, brain trauma, intracranial hemorrhage, and genetic metabolic diseases (including tuberous sclerosis), chromosome abnormalities (including Down syndrome) and infections [6]. In this study, we analysed the clinical features, imaging findings, EEG characteristics, treatment and prognosis of infantile spasms children with history of hypoglycemic cerebral damage in neonatal period. The objective was to provide a basis for prevention and treatment of this disease.

One hundred and six children diagnosed with infantile spasms from July 2013 to April 2015 in the Third Affiliated Hospital of Zhengzhou University were selected. The data of the perinatal period and growth and development were collected. The corresponding physical examination and laboratory tests, including imaging (brain MRI or CT), EEG, blood biochemistry and metabolic screening were performed. Finally 21 children with early hypoglycemia brain injury were screened. In these 21 patients, there were 13 males and 8 females. The birth weight was 2.200-4.950 kg, with average 3.106 kg. The gestational age was 37-41 weeks (including 1 case of twins). All 21 patients had no sepsis, intracranial infection, electrolyte imbalance or genetic metabolic disease. There were 3 cases of hypoglycemia complicated with asphyxia. One hundred and six children patients without infantile spasms in our hospital were selected as control for investigating the hypoglycemia history. This study was approved by the ethics committee of The Third Affiliated Hospital of Zhengzhou University. Written informed consent was obtained from the family of all patients.

The inclusion criteria of hypoglycemia were as follows: i) The blood glucose level within 24 h after birth was less than 2.2 mM/L, and that after 24 h was less than 2.2-2.8 mM/L [4]; ii) The patients had one or more neonatal hypoglycemia manifestations including low reaction weakness, paroxysmal cyanosis, convulsions, irritability, apnea, lethargy, refusing milk, and so on.

The diagnostic criteria of hypoglycemic cerebral damage were as follows: (i) The patients had clinical non-specific symptoms of hypoglycemia, or had severe hypoglycemia (0-1.7 mM/L) history; (ii) The blood glucose level was less than 2.0 mM/L; (iii) The neurological dysfunction (coma, convulsions, etc.) appeared during the period of hypoglycemia or after a period from hypoglycemia correction; (iv) The skull imaging examination or brain function examination showed changes in brain structure or function; (v) The brain injury caused by hypoxic-ischemic cerebropathia, severe infection or abnormal brain development was excluded. 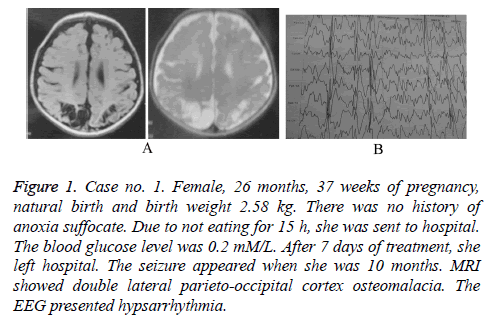 Figure 1: Case no. 1. Female, 26 months, 37 weeks of pregnancy, natural birth and birth weight 2.58 kg. There was no history of anoxia suffocate. Due to not eating for 15 h, she was sent to hospital. The blood glucose level was 0.2 mM/L. After 7 days of treatment, she left hospital. The seizure appeared when she was 10 months. MRI showed double lateral parieto-occipital cortex osteomalacia. The EEG presented hypsarrhythmia. 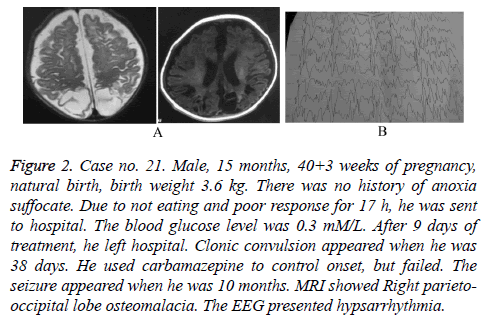 Figure 2: Case no. 21. Male, 15 months, 40+3 weeks of pregnancy, natural birth, birth weight 3.6 kg. There was no history of anoxia suffocate. Due to not eating and poor response for 17 h, he was sent to hospital. The blood glucose level was 0.3 mM/L. After 9 days of treatment, he left hospital. Clonic convulsion appeared when he was 38 days. He used carbamazepine to control onset, but failed. The seizure appeared when he was 10 months. MRI showed Right parietooccipital lobe osteomalacia. The EEG presented hypsarrhythmia.

In 21 infantile spasms children with history of hypoglycemic cerebral damage, the follow-up time for 20 patients was 6 months or more, with 3 months for 1 case. In all cases, only 1 case received combined oral topiramate and levetiracetam treatment after steroid pulse therapy, and obtained a long-term control of disease. The control rate of 21 cases was 4.76%. The remaining 20 patients were treated with 3-9 kinds of drug for 4-53 months. The drugs were mainly steroids and anti-epileptic drugs, including methylprednisolone, adrenocorticotropic hormone, prednisone, vigabatrin, prop sodium valproate, topiramate, levetiracetam, clonazepam, carbamazepine, lamotrigine. However, the disease did not achieve full control, and the cognitive, motion coordination and language development of patients were poor. Two patients showed cortical blindness (Table 3).

In this study, we have conducted the etiology survey on 106 cases of infantile spasms in nearly two years, and there are 21 cases of children can be traced with a clear history of brain injury, accounting for 19.81%. This further confirms the relationship between hypoglycemia cerebral damage and infantile spasms. Occipital lobe is the visual center, and many cases of seizures have photosensitivity. The brain MRI of photosensitive epilepsy shows that, the occipital cortex sense has a high sensitivity to light [11]. Ferlazzo et al. [12] found that, the visual cortex has too high excitability when subjected to receiving photosensitive stimulation. Porciatti et al. [13] believe that, the visual center damage may have special reaction to photosensitive stimulation, leading to seizures. Therefore, the occipital injury induced by neonatal hypoglycemia prone to infantile spasms may be due to that, the occipital lobe of the brain in infancy is the most light-sensitive region to accept external stimulation [8]. The incubation period of infantile spasms caused by hypoglycemic cerebral damage in children is 0.5-30 months. It is difficult to predict the time of occurrence of infantile spasms for children with hypoglycemia brain injury. Therefore, the periodic EEG examination is necessary for children with hypoglycemic brain injury.

Glucose is the only energy source for a long time for the brain development in neonatal period. The long-term hypoglycemia may cause irreversible damage to nerve cells [14]. There are many causes for hypoglycemia. From 21 infantile spasms children with history of hypoglycemic cerebral damage, the main reason for hypoglycemia is late open milk, poor sucking and improper management. The traditional view suggests that, the gestational age birth through normal healthy full-term children do not need routine screening and monitoring of blood glucose. The new-borns with high risk factors should be monitored with blood glucose within the first 24 h after birth [15]. In these 21 cases, the time of hypoglycemia onset is 1-8 days after birth. There are 3 cases with risk factors. This prompts us to pay close attention to the blood glucose of children who have no obvious risk factor level or those who have 1 day age.

In this study, the MRI, CT and EEG of these 21 infantile spasms children with history of hypoglycemic cerebral damage show that, the head MRI and CT are mainly manifested with parietal occipital softening and glial scar, accounting for 76.19%, including 3 cases with neonatal period hypoxia asphyxia. However, the relevant literature finds that, the skull imaging of cerebral damage caused by lack of oxygen is mainly manifested with the lesion in watershed area and periventricular white matter, which generally does not cause characteristic occipital injury [16]. Therefore, these 3 cases are attributed to hypoglycemic cerebral damage. In EEG, the hypsarrhythmia and occipital dominated epilepsy wave distribution after treatment are the most common, which is consistent with previous literatures [7,17]. The reason of the special vulnerability of occipital region to hypoglycemia is unknown. It is generally believed that, this susceptibility is related to occipital lobe, which is the most productive part for neonatal axonal growth and synapse formation [18]. However, we believe that, this vulnerability may be related to that the occipital lobe is the earliest region for cerebral cortex development [8]. In this study, the treatment and 6 months of follow-up of 21 children show that, only 1 case obtains longterm control, with control rate of 4.76%. This is far less than the long-term (≥ 6 months) control rate (24.52%) of infantile spasms children with the same period of hospitalization.