This study aims to evaluate the clinical efficacy of core decompression with bone grafting combined with perifemoral arterial infusion (CDBG-AI) in treating stage I-II osteonecrosis of the femoral head (ONFH). A total of 40 patients (40-70 years old) with stage I-II ONFH were enrolled. Initially, these patients underwent core decompression plus implantation of allogeneic bone and CaSO4 particles; 5-7 days later, they received arterial perfusion of a thrombolytic drug and vasodilator into the exterior and interior femoral circumflex arteries, obturator artery, and inferior gluteal artery; the perfusion was repeated at the 3rd, 6th, and 12th postoperative month. Imaging changes in the femoral head were observed 1 year later; the visual analogue score (VAS) was used to evaluate symptom improvement, and the Harris score was used to evaluate function. Among the 40 patients, signs of necrosis disappeared in four cases, 32 cases showed no changes on imaging, and four cases progressed to stage III; the VAS scores showed symptom relief in 36 cases, but four cases showed either no relief or aggravated symptoms; the Harris scores showed improvement in 36 cases, and worsening condition in four cases. Routine CDBG-AI could effectively improve the prognosis of less than stage II ONFH and delay its progression.

Osteonecrosis of the femoral head (ONFH) is a devastating multifactorial disease that affects 20,000 persons each year in the United States [1]. Although the etiology of ONFH has not been definitely delineated, the risk factors include corticosteroid administration, alcohol consumption, trauma, and coagulation abnormalities [2]. In 2003, as one of the important treatments for severe acute respiratory syndrome (SARS), high-dose corticosteroid therapy also caused many cases of ONFH, which then was defined as a severe sequela of SARS. A retrospective study, which included 539 cases, revealed that 24% of the patients administered corticosteroid therapy was diagnosed with ONFH [3].

According to the suggestions of the Association Research Circulation Osseous (ARCO) [4], ONFH can be divided into 5 stages: in stage 0-stage II, patients mostly have mild to moderate pain with imageological changes; however, in stage III-stage IV, collapse of the femoral head is typical, and ultimately requires a standard total hip arthroplasty (THA) [5].

In the past, patients with less than stage II ONFH received medication and closed treatment to relieve pain; many treatments have been developed, including pharmacologic agents and physical therapy. Among the pharmacologic agents, statins were used in the early 21st century [6,7], followed by anticoagulants [8,9], prostacyclin [10,11], bisphosphonates (Bps) [12-14], aspirin (which was found to be able to prevent disease progression in young adults in one prospective cohort [15]), and osteonecrosis (which might be a promising therapy for early stages) [16]. Physical therapy is also used to improve prognosis in ONFH; extracorporeal shock-wave therapy (ESWT) [14] and electromagnetic therapy [17] both showed effectiveness in early ONFH due to increased ingrowth of neovascularization and new bone formation. Hyperbaric oxygen treatment is also effective in preserving the hip joint in stage I and II ONFH [18].

Based on prior studies, we used core decompression plus artificial bone implantation, followed by routine perfusion of an antispasmodic and vasodilator as well as thrombolytic therapy in the FH arterial blood supply, aiming to both reduce the pressure on the femoral head and to improve the FH blood supply. The study achieved certain effects as reported herein.

A total of 40 patients with stage I-II ONFH confirmed by symptoms, signs, and imaging results at our department from January 2009 to December 2013 were included. Twenties seven patients are stage I and seventeen patients are stage II in total forty patients, the patients were 40-70 years old and included 18 male and 22 female patients; disease causes: 12 cases of hormone use, 10 cases of alcohol consumption, six cases of sprains, and 12 cases of unknown cause. This study was conducted in accordance with the declaration of Helsinki. This study was conducted with approval from the Ethics Committee of X Provincial Orthopedics Hospital. Written informed consent was obtained from all participants.

The patient first underwent continuous epidural anesthesia, and was then placed in position with the uninjured limb on top and flexed and with the injured limb straight; a C-arm position-guided knife was then used to make a 4 mm incision about 3 cm under the greater femoral trochanter. A solid-center 4 mm bone drill was then used to break the cortical bone; a puncture needle core was then inserted and progressed to the base of the femoral neck; a hollow drill was then used to continue drilling the necrotic base until live cancellous bone was removed. Finally, the solid-center drill was used to drill the necrotic tissue until the subchondral bone was reached; the cancellous bone inside the hollow drill was then implanted into the subchondral bone, and gelatin sponge was used to fill the remaining bone puncture channel after CaSO4 particles and allogeneic bone were implanted.

The uninjured femoral artery was first punctured and a 5 F arterial sheath was inserted; a C3 opacification catheter was used to penetrate into the opposite side. A Terumo microcatheter was then used to super selectively penetrate to the exterior femoral circumflex artery, medial femoral circumflex artery, and obturator artery; 30 mg of papaverine, 20 mg of alprostadil, 80 mg of sodium ozagrel, and 200,000 U of urokinase were diluted in 120 ml and pumped into the above three arteries (40 ml, 30 ml, and 20 ml, respectively). The remaining 30 ml was pumped into the gluteal artery.

Table 1. Changes of femoral head during treatment, including MRI/Harris/VAS. 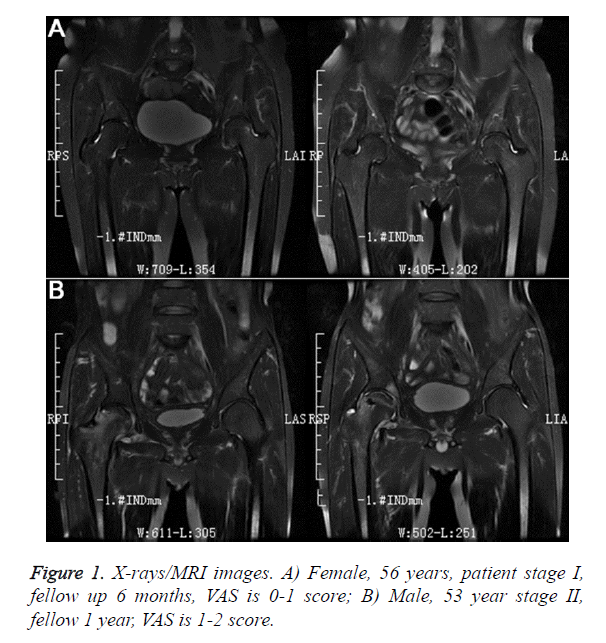 One study showed that core decompression via multiple small drill holes could allow postoperative load-bearing with similar or even better clinical outcomes without prolonged use of an expensive tantalum implant [23]; this was consistent with the findings of a meta-analysis including four randomized controlled trials and two controlled clinical trials of 323 hips with 24-48 months of follow-up, suggesting that core decompression showed a trend toward favorable results, in contrast to other conservative treatment. This could be effective for preventing femoral collapse during short-term follow-up, but an even higher success rate could be expected with biophysical stimulation [24]. Consistent with the above studies, not only core decompression but also simultaneous implantation of cancellous bone, allogeneic bone, and CaSO4 could stimulate angiogenesis. One study enrolled 10 patients for mesenchymal stromal cell transplantation, and thereafter demonstrated the feasibility and safety of a multiplex rehabilitation program [25].

After the pressure was reduced, the vicious cycle of femoral head necrosis could be broken, thus promoting the gradual elimination of metabolites [26]. From this observation, it was apparent that pain was significantly relieved after core decompression, and hip function improved; after arterial injection of high concentrations of an anticoagulant, a vasodilator, and a thrombolytic drug, the blood circulation in the femoral head was further improved, the oxygen supply improved, metabolism increased, and new blood vessels were induced. The clinical efficacy was stable. This observation also revealed that the postperfusion efficacy was relatively stable after core decompression. However, the reasons for ONFH vary, especially in trauma-induced ONFH; whether trauma caused organic injury in the FH blood vessels remained unclear. Furthermore, smoking and drinking habits in some patients were not completely corrected after surgery, with continued damage to microvessels; finally, the conditions in elderly patients were partially related to atherosclerosis. All the above factors might lead to poor outcomes and even further aggravation. Among the four aggravated cases of ONFH, one patient initially exhibited pain relief, but progressed to stage III and required femoral head replacement due to continued heavy drinking. Two cases had persistent pain after trauma; after core decompression, the pain was briefly relieved but the condition became aggravated and progressed. One patient was older than 70 years; pain worsened after core decompression, and a secondary femoral neck fracture occurred. Some studies adopted a porous tantalum rod combined with endoscopy, curettage, autologous bone grafting, and bone marrow aspiration from the iliac crest; among 49 patients (58 hips), 38 hips were in stage II, and no patient developed a serious intraoperative or postoperative complication; the 5-year survival based on conversion to THA was 93.1%, and the rate based on disease progression was 87.9%, which was an encouraging outcome [27].

Because the number of clinical cases was small, with a large age range and complex comorbidities, efficacy requires on-going monitoring.