Objective: To determine the correlation between cord albumin levels and development of hyperbilirubinemia in term healthy neonates. Methods: A Prospective study was conducted on 165 term healthy neonates. Gender, gestational age, anthropometric measurements were taken into consideration. It was ascertained that there was no other risk factor for hyperbilirubinemia amongst the neonates. The neonates were divided into two groups A and B based on the cord albumin levels of <2.8 mg/dl and >2.8 mg/dl. Results: Of the 165 babies included in the study, 126 babies were under Group 1 and 39 under Group 2. 44 babies (34%) in group 1 and 28 babies (71.7%) in group 2 (p<0.0005) developed clinical icterus of which 16 in group 1 and 19 in group 2 required phototherapy (p<0.05). 1 baby in group 2 required exchange transfusion. The sensitivity and specificity of cord albumin in detecting neonatal hyperbilirubinemia in this study was determined to be 71.8% and 65.1%, respectively. Conclusion: Cord albumin levels help to determine and predict the possibility of hyperbilirubinemia among neonates. Hence this can help to identify the at risk neonates. So routine determination of cord albumin can be advocated to keep a track on at risk neonates.

Neonatal Jaundice or icterus neonatrum has been observed in new-born babies for many centuries. It was in the early 18th century that Juncker first differentiated between true jaundice and the yellowish tinge observed in many neonates [1].

About 84% of the new-borns are affected by neonatal hyperbilirubinemia and it is considered as the most common cause for readmission to the hospital during this period [2]. Severe hyperbilirubinemia is when the total serum bilirubin [TSB] level is more than 20 mg per dL and it occurs in less than 2% of term infants and can lead to kernicterus. Hence it is important to evaluate all newborns for clinical signs of hyperbilirubinemia.

Risk factors for the hyperbilirubinemia include cephalhematoma or significant bruising, early gestational age, exclusive unsuccessful breastfeeding, isoimmune or other hemolyticanemia and a sibling with a history of neonatal jaundice [3]. In addition to hyperbilirubinemia, earlier gestational age, hemolysis, sepsis, and low birth weight are associated with the development of bilirubin encephalopathy. As per the guidelines set down by the American Academy of Pediatrics neonates discharged within 2 days of birth must report back for a follow-up visit within 48-72 h after discharge [4].

Physiological hyperbilirubinemia is a result of immature liver cell which have low uridine diphosphoglucuronosyl transferase activity when compared to mature hepatocyte, low concentration of albumin which is a bilirubin binding ligand and increased number of erythrocytes which have a shorter life span. Physiological jaundice is a normal response on the part of the baby due limitations in the ability to excrete bilirubin. Neonates develop an unconjugated hyperbilirubinemia due to increased level of unconjugated Bilirubin above 1.0 mg/dl. Early treatment with phototherapy is effective, simple and cheap. This is the appropriate treatment for exaggerated neonatal jaundice [5].

Liver is the site of synthesis of albumin. It binds to unconjugated bilirubin and helps in the transport. This in turn reduces the bilirubin toxicity on the tissues and thereby competing with tissues for bilirubin binding. Extremely avid binding to albumin may be detrimental, however, because it limits the rate of hepatic removal of unconjugated bilirubin from the plasma [6,7].

Low production of albumin will lower its transport and binding capacity and hence determination of at risk neonates early on will help to avoid the complications associated with neonatal jaundice [8]. It has been noted that there is a dramatic decrease in the hospital stays of healthy neonates over the past few decades. It has been noted that the neonates that appear healthy are usually discharged within 48 hours of birth [9]. Hence it is important to determine the babies who are at risk of developing hyperbilirubinemia following an early discharge from the hospital. Hence the present study was conducted in order to determine the correlation between cord albumin and development of neonatal hyperbilirubinemia.

All the healthy term new-borns during the study period were included in the study after obtaining consent from the parents. Neonates with ABO or Rh incompatibility, Major congenital malformations, Cephalhematoma, Early onset sepsis and Preterm babies were excluded from the study. The data was entered into the Performa in which the gender, gestational age, mode of delivery, anthropometric measurements at birth, cord TSH, Cord albumin and total and direct bilirubin of the babies were noted.

3 ml of cord blood was collected at birth in a SST and was sent for estimation of cord blood albumin and TSH. Cord Albumin was assessed using the Biuret reaction technique using an automated analyzer. Babies were examined daily for the presence of icterus up to the 5th day following which they were discharged. On detecting the presence of icterus, Blood was sent for estimation of Total Bilirubin (TB) and the results were plotted on the chart to identify the type of intervention the baby required. Data was collected as per the Performa after obtaining consent from the parents of the neonates.

The main outcome of the study was inferred in terms of neonatal hyperbilirubinemia. All the data was entered in Microsoft excel sheet and SPSS Version 21.Statistical data were analysed with t test, chi-square test and ANOVA. Sensitivity, specificity, negative and positive predicative value of the tests was calculated. The cord albumin levels having highest specificity and sensitivity was determined with the Receiver Operating Characteristics (ROC) curve analysis.

In the study a total of 165 babies were registered. Out of this 52.7% were female and 47.3% were male. There was no significant difference in the number of male and female babies. Depending on the cord albumin levels the babies were grouped into two: >2.8 mg/dl (Group 1) and <2.8 mg/dl (Group 2). Lower normal limit for cord serum albumin in term babies is 2.8gm/dl [10]. There were a total of 126 babies in Group 1 and 39 babies in Group 2. The mean gestational age was among Group 1 was 39.022 ± 1.144 weeks and Group 2 was 38.194 ± 2.039. It was noted that babies born at a lower gestational age had a higher chance of having a low albumin value and subsequent hyperbilirubinemia (p=0.002). 84 babies were born by normal vaginal delivery and 81 were born by LSCS and there was no significant difference between the babies developing icterus based on the mode of delivery. The anthropometric profile of both the groups were compared and it was noted that only the birth weight had a significant correlation with cord albumin (p<0.001) (Table 1). A significant correlation was noted between the Cord TSH and cord Albumin levels in this study (Table 2).

In the present study we assessed the ability if cord albumin in assessing and acting as a tool for screening for neonatal jaundice. Albumin in a neonate is the major binder of bilirubin and decrease the binding and transport of it [11]. The study group has a uniform representation from both the sexes with no significant correlation. However studies done by Satrya et al. [12] and Maisels et al. [13] had showed that male babies are at a higher risk of developing icterus and subsequent intervention for icterus. But the present study is in correlation with study done by Taksande et al. [14] which states that there is no relation between neonatal hyperbilirubinemia and the sex of the baby. 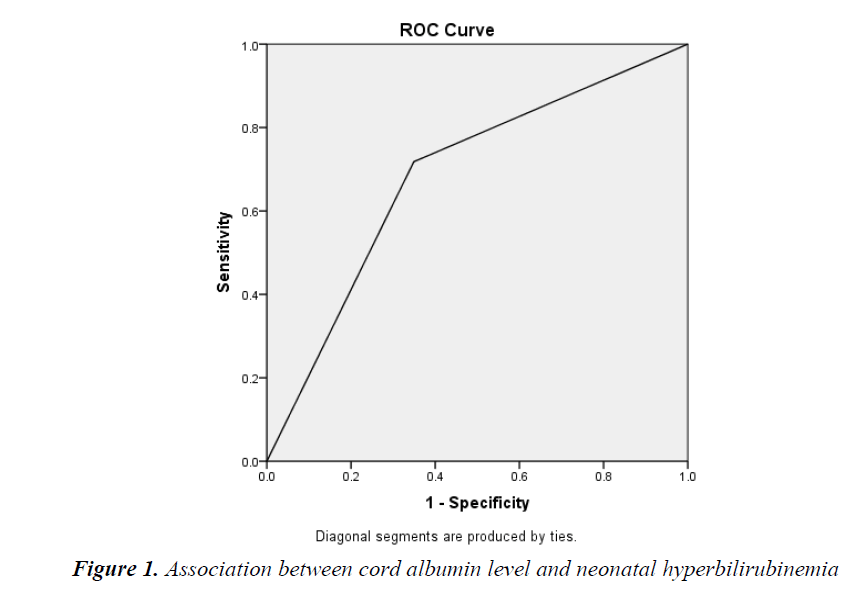 It was noted that there was no relation between the mode of delivery and the development of icterus and the cord albumin levels were not significantly different. This was in correlation with the studies done by Sun et al. [15] and Sahu et al. [16]. When the birth weight of the neonate was considered it was seen that babies born with lower weight had a significantly higher chance of developing of icterus and the babies mostly had low cord albumin levels. Whereas previous studies by Knusden et al. [17], Awasthi et al. [18] had stated that there was no significant correlation between the birth weight and low cord albumin values.

Cord Albumin levels in a healthy term neonate helps to predict the possibility of the neonate having hyperbilirubinemia. It helps to determine the neonates who are at a higher risk of developing jaundice. A value less than 2.8 mg/dl has found to be more associated with clinical icterus. Hence routine determination of cord Albumin along with TSH can be implemented to keep track of at risk neonates.