Construction of Absorption Filter for colorimetry and its performance characteristics

1Department of Chemistry, The Federal University of Technology, P. M. B. 704 Akure, Nigeria

The aim of this study was to device in house a suitable absorption filter for colorimetric analyses. An absorption filter was so constructed using 40% CuSO4.5H2O solution in 8M HCl (w/v) in glass support of 2mm internal diameter. The filter was found to have a nominal wavelength of 540±0.92nm, spectral bandwidth of 41±0.82nm and a peak transmittance of 36±0.40%. The filter offered a sensitivity of 0.81±0.03 for a single beam colorimeter at 540nm. Its photometric linearity was through an absorbance unit of 0.52±0.02 while that of the manufacturer filter was through 0.92±0.03. The significantly lower photometric linearity (P < 0.05) of the filter notwithstanding, it offered a mean value for blood haemoglobin concentration of 122±20g/l which was not significantly different from 124±19g/l obtained with manufacturer filter (P > 0.05). The filter would be suitable for absorbance measurement at 540nm wavelength particularly for blood haemoglobin concentration determination in a developing economy.

Most quantitative analyses performed in the clinical chemistry laboratories involve colorimetric procedures, which are based on the Beer Lambert’s law. The law states that when a monochromatic radiation passes through a solution of absorbing species, the absorbance is directly proportional to the concentration and thickness of the solution in the light path [1]. The law assumed monochromatic light, which is approached only in sharp line emission standard of spectra. All wavelength selection devices (optical filters and monochromators) have minimum entrusted bandwidth. This requires that absorptivity have to be constant over range of wavelength selected, otherwise there would be a departure from the law. The deviation gets increasingly significant for wide band spectral wavelengths [2]. An optical spectral bandwidth in an instrument not only selects the true natural bandwidth, but also has to have acceptable throughput. Thus, wavelength selection devices have to isolate selected narrow bands of wavelengths within a comparatively wide spectral range.

Absorption filters are generally constructed from dyed glass, lacquered gelatin, or synthetic polymers to offer a wide range of applications [3,4]. Certain metal complexes or salts dissolved or suspended in glass produce colour corresponding to the predominant wavelength transmitted [5,6]. Absorption filters are widely used for band selection in the visible regions. Although performance characteristics of absorption filters are inferior to those of interference filters, they are found adequate for many applications in solution colorimetry especially when the spectral bandwidth of the instrument is not much greater than the natural spectral bandwidth of the chromogen being measured [7].

Griffin Colorimeter (Griffin & George Ltd, England) and the like are commonly used in clinical laboratories in developing countries. They are supplied with seven gelatin filters. The filters are not sealed in a special filter wheel and do not form an integral part of the instrument. They are also not protected against finger marks and dust; and can grow moulds in humid climates. Misplacement of any of the filters is frequently encountered, especially so with the Ilford 605 (540nm) commonly used for blood haemoglobin estimation. Spare filters from the manufacturers are expensive and not even readily available. The need to locally construct suitable absorption filters therefore becomes highly imperative. In this study, construction of an absorption filter from copper sulphate solution and its performance characteristics are described.

Construction of the filter

All chemicals used were of analytical grade. CuSO4.5H2O (40g) was dissolved in 8M HCl and diluted to mark in a 100cm3 standard volumetric flask with 8M HCl. Further dilutions were carried out using 8M HCl to obtain 30%, 20%, 10% and 5% solution. The transmittance spectra of the solutions were obtained on ‘Biochrom 4060’ Ultraviolet Visible Recording Spectrophotometer at a scanning speed of 40nm per second, using 8M HCl as a reference. A prototype of the filter holder of a Griffin Colorimeter was cut from a 2.5mm thick black Perspex, obtained from a local market in Ibadan, Nigeria. One end of a glass tube (2mm internal diameter) was sealed in flame (butane/air combustion). 40% CuSO4.5H2O solution in 8M HCl (w/v) was introduced into the tube and 10mm length sealed off. The capsule (the copper sulphate solution in glass support) was set appropriately into the Perspex so as to give approximately the same effective light transmission as the manufacturer filter of the colorimeter. The performance characteristics (sensitivity and photometric linearity) of the colorimeter with the constructed filter using aqueous KMnO4 solution, whose wavelength of maximum absorption is 540nm [6], were investigated.

The sensitivity of a COJ-500-D Griffin Colorimeter with the constructed filter was determining by comparing the slope of calibration curve of aqueous KMnO4 solution with that obtained with the manufacturer filter of the colorimeter [8,9].

The ability of the photometric system (colorimeter/its filter) to yield a linear relationship between the radiant power incident on its detector (proportional to concentration) and the measurable quantity provided by the system (absorbance) was performed by plotting a calibration curve for standard aqueous solution of KMnO4 [9,10].

Blood haemoglobin concentration of ten blood samples determined by cyanmethaemoglobin method [11] with the constructed filter was compared with that obtained with the manufacturer’s filter.

All data were mean ± SD (n = 3). The significance of the differences between means was appraised by student ‘t’ test.

The transmittance spectrum of 40% CuSO4.5H2O solution in 8M HCl (w/v) at 10mm path length is shown in figure 1 while table 1 shows the spectral transmittance characteristics of various concentrations of CuSO4.5H2O solution. The filter constructed using 40% CuSO4.5H2O solution in 8M HCl (w/v) as its colour substrate has a nominal wavelength of 540±0.92nm, spectral bandwidth of 41±0.82nm and a peak transmittance of 36±0.40%. The sensitivity of a COJ-500-D Griffin Colorimeter (Griffin & George Ltd, England) with the constructed filter was 0.81±0.03 using its 540nm (Ilford 605) filter as a reference. Its photometric linearity was through an absorbance unit of 0.52±0.02 while that of the reference filter was through 0.92±0.03. The mean haemoglobin concentration of ten blood samples with the filter was 122±20g/l while the values obtained with the reference filter was 124±19g/l. 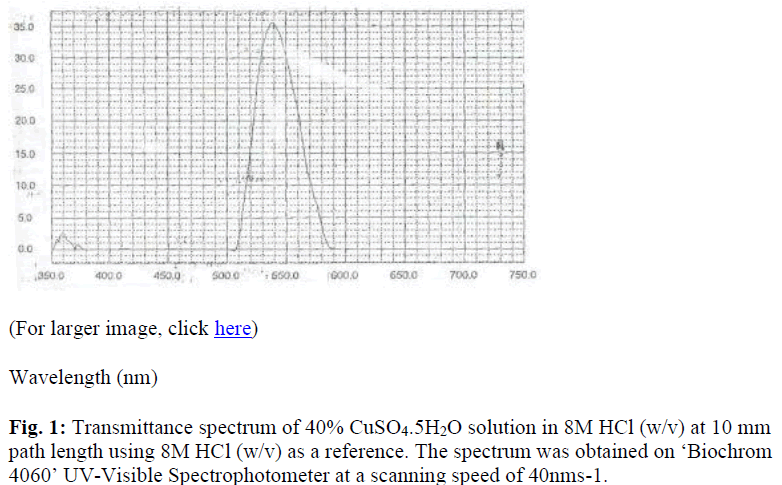 The present research examines the cupric ion as a substrate in the construction of absorption filter and its performance characteristics. The colour of the CuSO4.5H2O solution in 8M HCl (w/v) was green when viewed against white light and its nominal wavelength ranged between 540-550nm. This is in agree ment with the fact that a solution will appear green against white light if it transmits light maximally between 500-580nm [5,6]. The data also showed that variation in the concentration of the salt does not significantly affect the nominal wavelength of the filter (Table 1). Hence, nominal wavelength of a filter is an inherent property of its colour substrate. Since selection of a filter is a compromise between the transmittance and spectral bandwidth, 40% CuSO4.5H2O solution in 8M HCl (w/v) was found the most suitable as colour substrate in the filter. This is because its spectral bandwidth of 41nm is close to the 40nm spectral bandwidth of the 540nm (Ilford 605) manufacturer filter of the Griffin colorimeter used for the performance study.

The sensitivity of the COJ-500-D Griffin Colorimeter (Griffin & George Ltd, England) with the constructed filter was 0.81±0.03 using its using its 540nm (Ilford 605) filter as reference. This is 90% performance of the 0.9 recommended [8,9]. The photometric linearity was through an absorbance unit of 0.52±0.02 while that of the reference filter was through 0.92±0.03. This is significantly lower than the photometric linearity of the manufacturer filter (P < 0.05). In general, up to an absorbance unit of 1.0 is the recommended performance [9,10].

The authors acknowledge the technical assistance of M. O. Ashedu, Glass Blowing Unit, Department of Chemistry, The Federal University of Technology, Akure, in fabrication of glass dimensions in this study.