Congenital lobar over inflation is a rare congenital malformation of the lung characterized by over inflation of a lobe of the lung due to partial obstruction of the bronchus resulting in compression of normal lung tissue. We are describing two cases of Congenital Lobar over inflation (CLO) which presented in early infancy with severe respiratory distress. One of the cases was initially misdiagnosed as Pneumothorax and CLO were thought of only after chest tube insertion failed to provide any relief in respiratory distress. Both the cases were subsequently managed surgically with lobectomy followed by an uneventful recovery.

CLO, previously called congenital lobar emphysema is a rare congenital malformation of lungs. It is characterized by over inflation of pulmonary lobe, with compression and displacement of adjacent normal lung tissues.

The prevalence of CLO is reported to be 1 in 20,000 to 1 in 30, 000 with a male to female ratio is 3:1 [1]. CLO usually involves one lobe, with 47 % involvement of left upper lobe followed by right middle lobe (34%) and right upper lobe (21%) [2]. It presents as life threatening respiratory distress especially within the first 6 months of life due to compression atelectasis, mediastinal shift, hypoxia, and associated hypotension [3].

A two months old baby presented to us with six weeks history of cough, wheezing and progressive difficulty in breathing (Figure 1).

On examination, the child was tachypnoeic with severe chest in drawing, chest had decreased expansion, the trachea was shifted to the right and a hyper resonant percussion note was heard over the left anterior thoracic region. Bilateral scattered rhonchi were present. Other systemic examination was normal.

The diagnosis of CLO was made and the patient was referred to surgery department for surgical management. Postoperatively the patient remained stable with marked improvement in distress seen on follow-up visits of the child. 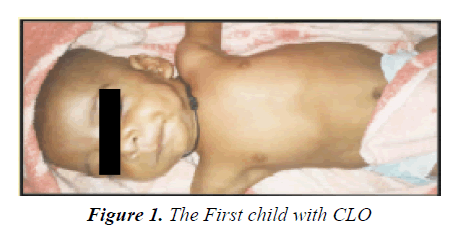 Figure 1. The First child with CLO 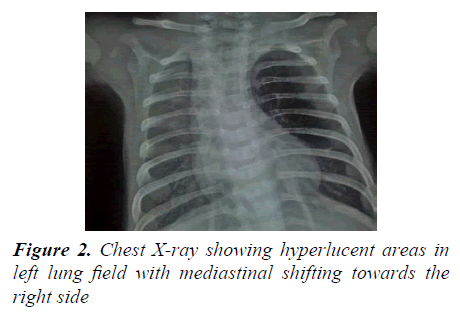 A forty-five days old male baby having severe respiratory distress since birth presented to our hospital after nonresponse to treatment taken at private hospitals (Figures 4-6). There a provisional diagnosis of pneumonia was made initially and the child was given I.V. antibiotics and later on in view of hyper lucency of the left upper lobe with mediastinal shift, pneumothorax was thought of and a chest tube was inserted. In view of no symptomatic relief in the child with any chest expansion on repeat chest X-ray, chest tube was removed and the child was referred to our hospital.

On respiratory examination, less movement of the left upper chest, the trachea was shifted to the right, vocal resonance was decreased on left side and on auscultation diminished breath sound was found on the left side. Other systems appeared normal.

CT scan (Figure 6) showed a hyper lucent hyperextended lobe with midline substantial herniation and compression of the remaining lung. The mediastinum is significantly shifted away from the side of the abnormal lobe. 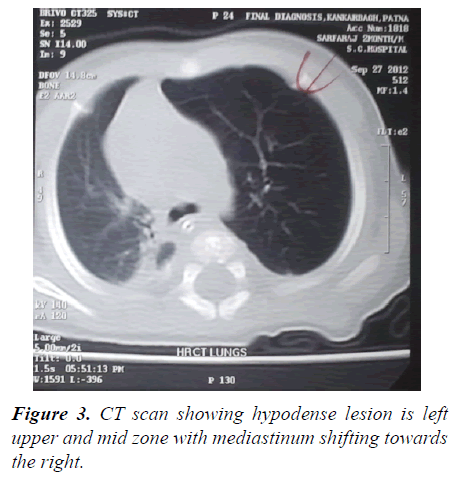 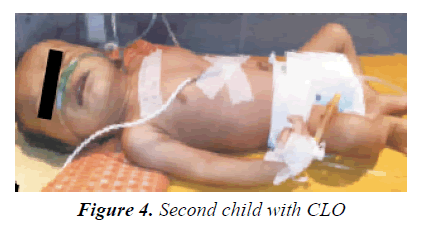 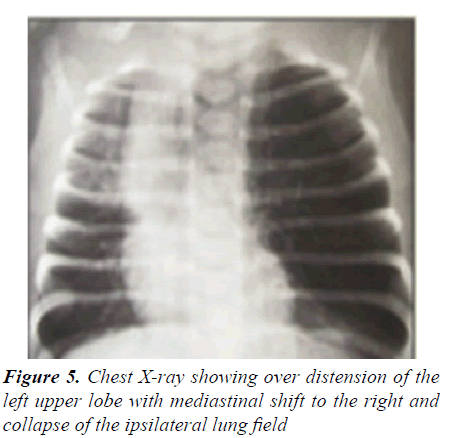 Figure 5. Chest X-ray showing over distension of the left upper lobe with mediastinal shift to the right and collapse of the ipsilateral lung field. 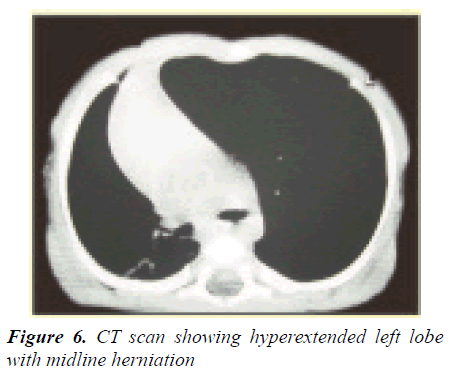 CLO is characterized by over inflation of pulmonary lobe and is caused by localized bronchial obstruction [4]. Overdistension of the airspaces within a pulmonary lobe leads to air trapping and compressive changes in the remainder of the lung and mediastinal shift away from the increased volume results in compression of the contralateral lung [2,4]. The formation of CLO may be caused by abnormal lobar bronchus development, most often it is a cartilage defect, less frequently a muscular coat defect, mucous membrane fold, stenosis, compression of the abnormally located vessel, tumor, etc. [2]. CLO usually involves one lobe, with 47% involvement of left upper lobe followed by right middle lobe (34%) and right upper lobe (21%) [2]. In some rare cases with bilateral involvement, the patient presents with severe respiratory distress, which needs urgent surgical management [5].

Antenatal diagnosis can be done with Ultrasonography which was missing in our case [6]. The diagnosis, although not definitive, is made by clinical examination and chest X-ray and can be confirmed by CT, as we performed in our case. The condition is most commonly confused with pneumothorax leading to ICD tube insertion as done in one of our cases. A series of 3 cases has been described by Tempe et al. [7] which presented with respiratory distress and were mistakenly diagnosed as pneumothorax and an ICD was inserted in all the 3 cases, but later on, all turned out to be CLE [7]. ICD insertion does not help; rather it may further increase the respiratory distress and lead to injury of the lung parenchyma [8]. In CLE the pulmonary vessels extend to the periphery of the hyperinflated lobe and there is no visualization of a pleural line unlike in pneumothorax. Concomitant Congenital Heart Disease (CHD) is also found in 12 to 20% cases of CLO [9]. There were no such anomalies in our patients. Congenital Lobar Emphysema typically causes unilateral hyperinflation. Since it is hyper-inflated, often there is air trapping and the diseased lung does not take an effective part in the respiratory gas exchange. Also, there can be significant air trapping, which can be later revealed in the pulmonary function tests including plethysmograph [10]. Also, the V-Q scan has shown reduced blood supply to the affected lungs, but it is unavailable at most of the hospitals in a developing country like India [11,12]. Children with CLE can present with hypoxia and decompensated respiratory failure. Under those circumstances, those children may need to augment their respiratory pump and in the clinical setting, it can be evident as orthopnea and tachypnea. It is similar to the animal models, where cats try to use their inspiratory muscle activity to compensate respiratory failure as described by the Physiologist Paul Davenport et al. [12]. Özçelik et al. have described the outcome based comparative analysis of 30 cases of CLE, which showed the majority of the children did very well with conservative management. This observation indicates that there may be a need for a more conservative approach in the developing countries, where many of the families cannot bear the cost of surgical management [13].