Glucose-Galactose Malabsorption (GGM) is inherited as an autosomal recessive trait. These monosaccharides are absorbed from the intestinal tract by Sodium-Glucose Co-Transporter (SGLT). GGM is caused by mutation in the gene coding for the intestinal brush border SGLT. Presenting prolonged diarrhea from the first day of life or a few days after birth, when the newborn is exposed to lactose from milk, leading to dehydration, ftt (Failure To Thrive), or death [1-2]. Replacing glucose and galactose by fructose usually, lead to the resolution of symptoms [3]. Hypercalcemia is less common in neonates compared to adults. It is an electrolyte imbalance a condition in which calcium concentration in the blood is above normal (>2.52 Mmol/L). Parathyroid hormone secretion is controlled through the interaction of extracellular calcium with specific calcium-sensing receptors (CaSR’s).

As in this case due to high levels of serum calcium it led to the suppression of PTH. Acquired Nephrogenic Diabetes Insipidus (NDI) occurred as a complication of hypercalcemia. The main characteristic of NDI is impaired AVP-induced water reabsorption resulting in symptoms of polyuria and polydipsia high serum osmolality and low urine osmolality [4]. We report a case of glucose, galactose malabsorption with a complication of hypercalcemia and nephrogenic diabetes insipidus in female infant.

A 35 days old Yemeni female, full term to first degree cousin parents presented with severe dehydration secondary to vomiting, diarrhea and polyuria since birth. The family reported death of another sibling at the age of 15 days with normal other sibling. Mother has multiple small renal stones in addition to repeated lower back pain. Positive history of family members from the mother’s side of having renal calcification, but unfortunately, we couldn’t investigate them as they are not living in Saudi Arabia. 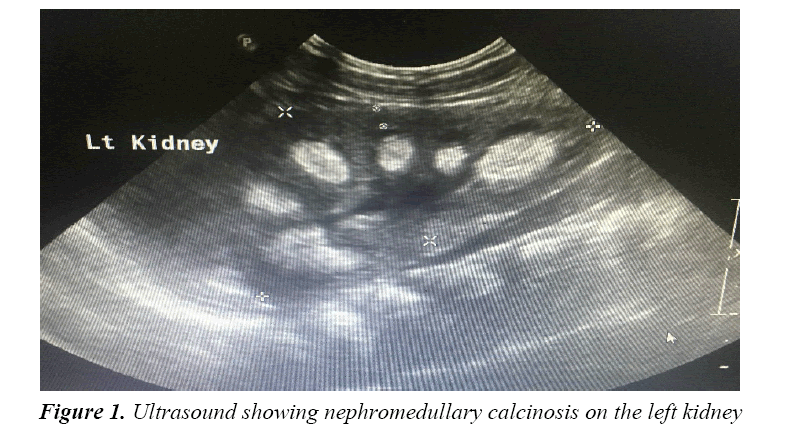 Glucose-galactose malabsorption is caused by mutation in the SLC5A1 gene, which provides instructions for producing the sodium/glucose cotransporter protein SGLT1. The malabsorption stems from mutations in the gene coding for the intestinal brush border sodium-glucose co-transporter (SGLT1). This gene is located on the distal q arm of chromosome 22 [1,2,5].

These monosaccharides have similar chemical structures, and normally they enter into specific cells in the small intestine where they are absorbed and transferred to other cells with the same transport enzyme. Glucose-galactose malabsorption occurred because the transport enzyme does not properly function, as a result of the mutation in sodium-glucose co-transporter located on chromosome 22. GGM is characterized by neonatal onset of profuse osmotic watery diarrhea as a result of accumulation of unabsorbed monosaccharides (glucose, galactose) in the intestinal lumen and can lead to severe dehydration, hypernatremia, metabolic acidosis and weight loss when fed breast milk or regular infant formulas and death if left untreated [2]. Mutational analysis was not done due to its unavailability.

Elimination of glucose, galactose, sucrose and lactose from the diet results in immediate cessation of diarrhea. The diarrhea recurs if the infant fed formula contains any of these sugars [3]. The fructose-based formula is the only effective treatment for these patients. The pathogenesis of hypercalcemia and nephrocalcinosis remains unclear, in our case it was not mediated by hyperparathyroidism, as the level of parathyroid hormone detected was suppressed as mentioned due to hypercalcemia and not due to hyper vitamin D which was normal as revealed. Several factors may therefore have predisposed our patient to nephrocalcinosis. The glucose-galactose malabsorption may lead to hypercalcemia, which would increase urinary calcium excretion. In addition, the lactose effect (by nonhydrolyzed lactose that has a direct enhancing effect on calcium absorption in the ileum), dehydration, and metabolic acidosis may have been contributory factors [6-8].

Management with hydration, diuretics, calcitonin and bisphosphonate therapy. All these therapeutic modalities have been successfully managed to reduce serum calcium within the normal range. The cause of hypercalcemia was unclear, but as an association with GGM as other reported cases in the literature.

In this neonate NDI was caused by hypercalcemia, after stabilization and returning calcium to normal level NDI resolved, indicating that it was transient NDI. Polydipsia and polyuria with dilute urine, hypernatremia, and dehydration are the hallmarks of diabetes insipidus in neonate and children. Neonates who have diabetes insipidus are unable to conserve water and therefore they become severely dehydrated. This defect, which is generally reversible with the correction of the hypercalcemia, may be due to the reductions in sodium chloride reabsorption in the thick ascending limb of the loop of Henle, thereby interfering with the countercurrent mechanism, and in the ability of ADH to increase collecting tubule water permeability.

We recommend awareness of this rare inherited cause of diarrhea with all consequent complications which is important for all pediatricians as it helps in early detection and management of such cases.

Patient parents agreed to use the information (including photographs) in this case report.