Prune Belly Syndrome (PBS), also known as Eagle Barrett syndrome, is a rare congenital disorder characterized by a triad of abdominal wall deficiency, urological abnormalities and in male cases, bilateral cryptorchidism. The live birth prevalence is 3, 2 per 100000 and it is four times higher in twins. Furthermore, there is male sex dominance in reported cases [1]. Uterine or vaginal anomalies can be seen in affected females instead of cryptorchidism. Cardiovascular, respiratory, gastrointestinal and musculoskeletal anomalies can be associated with prune belly syndrome [2]. Neurologic features are uncommon in prune belly syndrome. Herein, we describe a term neonate whom diagnosed as prune belly syndrome with meningomyelocele and pulmonary hypoplasia. To the best of our knowledge, this is a very rare case of prune belly syndrome associated with meningomyelocele.

The male neonate was delivered by caesarean section at 38th gestational week to a 27 year old mother. He weighed 2220 g (<10 p), his length was 51 cm (75-90 p) and head circumference was 37 cm (>90 p). Apgar scores were 4 and 7 at 1st and 5th minute, respectively. He was intubated because of respiratory distress in delivery room and admitted to neonatal intensive care unit. On physical examination, he had intercostal retractions with narrow thorax cavity, an enlarged and splayed abdomen, bilateral cryptorchidism and 4.0 × 6.0 cm sized lumbosacral meningomyelocele as shown in Figure 1. There was a very thin layer on the defect. In lower extremities there was no voluntary motion and deep tendon reflexes were absent. Prenatal ultrasonography was detected oligohydramnios, lumbosacral meningomyelocele and hydrocephaly. Family history was unremarkable and no paternal consanguinity. Posteroanterior X ray graphy revealed hemi vertebra on 3rd lumbar vertebra and vertebral fusion defects as shown in Figure 2. 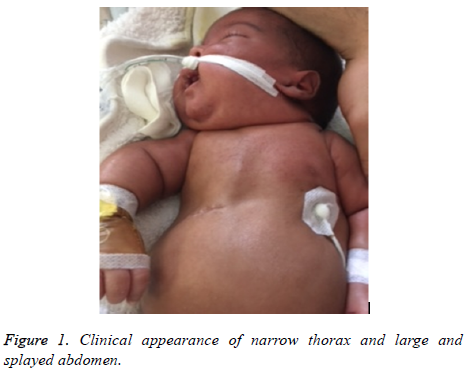 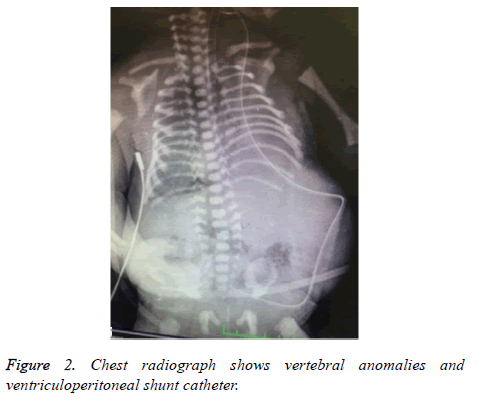 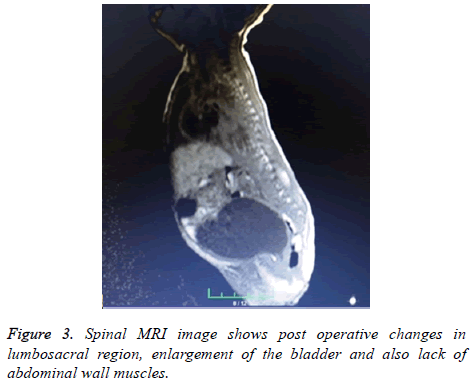 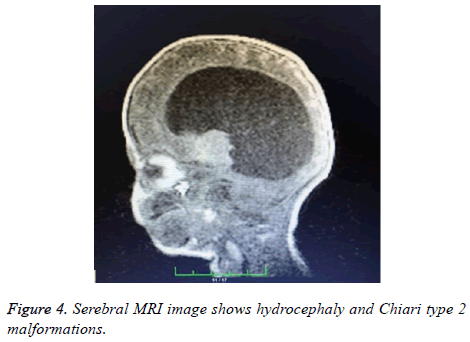 He underwent two operations; first for closing the lumbosacral defect and second for the replacement of ventriculoperitoneal shunt catheter. At the operation room on day postnatal 1, while placing umbilical venous catheter by paraumblical cut down, the paediatric surgeons noticed the absence of abdominal muscular wall.

He was diagnosed as prune belly syndrome and concurrence of lumbosacral meningomyeloce based on present findings. At postnatal 54th day, he died from sepsis and respiratory insufficiency. From birth to death, he required ventilation support in high inspiratory pressures.

Prune belly syndrome’s pathogenesis includes urethral obstruction and a mesodermal developmental defect but the exact etiology is unknown. Obstructive theory supports that severe bladder or distal ureter obstruction causes hydronephrosis and megacystis, results thinning of abdominal wall and undescended testis due to decrease of intraabdominal pressure [4]. The second theory is the failure of mesodermal development [5]. Also, genetic and environmental factors may play a role in the pathogenesis of prune belly syndrome [6].

In embryonic period, notochord derives from mesoderm layer during gastrulation phase. Mesoderm is responsible for the formation of dermis, striated skeletal muscles, urogenital (mesonephrons), pulmonary and cardiac systems, otherwise. It is well known that notochord and somites are the most significant structures responsible for development of future vertebral column. Alterations in this embryologic phase can result in one or more congenital anomalies. Genitourinary system is the most affected system with congenital anomalies of the spine [7].

Meningomyelocele is one of the most common central nervous system congenital anomaly. It is characterized by the herniation of a part of spinal cord and meningeal structures through an open spinal canal. Meningomyelocele is usually associated with hindbrain anomalies, hydrocephaly, bladder and bowel dysfunctions and orthopaedic deformities. In this case, in addition to prune belly syndrome, meningomyelocele, Chiari type 2 malformations and hydrocephaly identified.

Concurrence of prune belly syndrome with central nervous system anomalies is unusual. Only a few report noticed this association. First, Heffner reported two male cases which had absence of abdominal muscles and in collaboration with microcephaly and polymicrogyria [8]. Later Cenani reported a PBS case with meningomyelocele and discussed probability of a new syndrome [9]. Navarro-Arenas et al. reported a 45 year old man with prune belly syndrome who had schizencephaly and bihemispheric heterotopia and they discussed about presence of other embryonic tissues involvement besides the mesoderm layer [10].

As a consequence, in this case, we report a term neonate diagnosed as prune belly syndrome with meningomyelocele and pulmonary hypoplasia. There are only a few instances has been reported with this concurrence until now.

To the best of our knowledge, association of meningomyelocele and prune belly syndrome is very rare. Therefore, we reported this case and according to our opinion, concurrence of these two rare conditions can be explained with the common embryologic pathway. If organ systems that either originate from the same embryologic germ layer or develop at the same time are affected, this will result with associated defects.