Concomitant pulmonary embolism and myocardial infarction in the presence of underlying major thrombophilia, treated with low-dose systemic alteplase: A Case Report and review of the literature

Background: Pulmonary thromboembolism (PE) and Myocardial Infarction (MI) are lifethreatening conditions witch in rare case could be concomitant. Simultaneous onset is related to a single underlying disease, like paradoxical embolism or hypercoagulable state. Case summary: We report the case of a 78-year patient with recent surgery for prostate cancer, presented for acute onset of dyspnea and angina. Concomitant diagnosis of association of PE and inferior ST-Segment Elevation Myocardial Infarction (STEMI) was done by electrocardiography, troponin I change, Computed Tomography Pulmonary Angiogram (CTPA) and Coronary Angiography (CA). Filling defects were presents in both the main pulmonary artery and its branches and at origin of a bifurcation of marginal branch from coronary right artery. Intravenous tissue plasminogen activator (tPA)-alteplase was administered at a reduced dose (50 mg for 2 hours) due to high risk of bleeding. Clinical recovery was excellent. No Patent Foramen Ovale (PFO) was identified, but laboratory results revealed a combined thrombophilia with an abnormal protein C concentration and a heterozygous factor V Leiden mutation. Patient was discharged with Direct Oral Anticoagulants (DOAC) and is free of adverse events at 18 months follow-up. Conclusion: Early recognition of dual pathologies prompted in this case administration of thrombolytic therapy. Our observation showed that low dose tPA, may be a safe and effective treatment option for massive PE and STEMI, particularly in patients at a high risk of bleeding. Long term treatment with DOACs after Venous Thromboembolism (VTE) is a valuable therapeutic option in the presence of combined thrombophilia.

PE and MI are life-threatening conditions witch in rare case could be concomitant. Simultaneous onset is usually related to a single underlying disease, like hypercoagulable state or paradoxical embolism [1,2]. We report the uncommon case of a concomitant PE and inferior STEMI, in a patient with increased bleeding risk and unknown major thrombophilia, successfully treated with low-dose systemic alteplase. 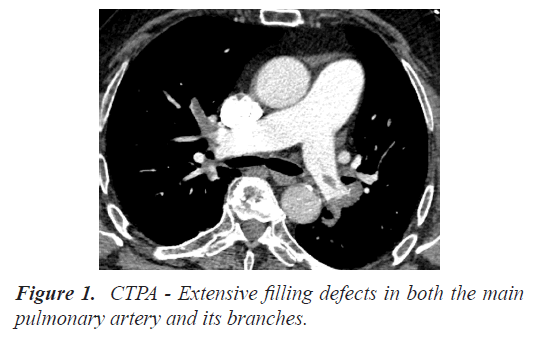 Figure 1: CTPA - Extensive filling defects in both the main pulmonary artery and its branches. 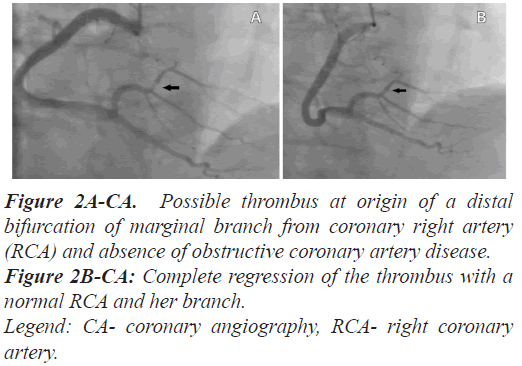 Since the respiratory failure and angina persisted with lowering of systolic BP <90 mmHg, systemic thrombolysis was initiated. Given his age and recent medical history (surgery with multiple transfusions for major bleeding, malignancy) he was considered with high bleeding risk and therefore low-dose alteplase iv (50 mg to run for 2 hours) was administered, without any complications. Enoxaparin (1 mg/kg/dose bid) and clopidogrel (300 mg, then 75 mg/day) were initiated following the r-TPA infusion. After thrombolysis dyspnea was dramatically relieved, the patient’s oxygen requirement decreased, BP was 110/80 mmHg and ST segment normalized.

Transthoracic echocardiography (ETT) with bubbleagitated saline was not diagnostic for PFO, and showed an ejection fraction of 50% with hypokinesia of the inferior wall, enlargement of the right chambers, an estimated pulmonary artery systolic pressure of 50 mmHg, and presence of McConnell’s sign. Venous duplex scan of the lower extremities showed absence of an acute thrombosis. A hypercoagulable status was suspected and further laboratory investigations revealed: troponin I in the ascending phase (14440 ng/L on day 1), normal homocysteine level, absence of antiphospholipid antibodies, antithrombin was 90% (normal 80%-120%), abnormal concentration of protein C with a level of 63% (normal 70%-120%), checked by chronometric and chromogenic methods. A heterozygous Factor V Leiden mutation was also found. Consequently, this patient had a combined thrombophilia.

The patient developed between day 3 and 6, transitory asymptomatic atrioventricular conduction troubles with narrow QRS duration-prolongation of PR interval>200 ms, and than Mobitz block type 1 and 2. On the sixth day a second CA was performed and showed complete regression of the thrombus with a normal RCA and her branch (Figure 2B) and therefore intravascular ultrasound study was not performed. He was discharged with full clinically and ECG recovery and remained on statin and extended anticoagulation with DOAC. At follow-up, 6 and 18 months later, the patient was free from symptoms and no adverse events have been reported [1,2].

Simultaneous occurrence in the same patient of PE and MI is relatively rare and usually ends in a fatal outcome [3]. Diagnosis is challenging because the symptoms, and ECG changes, could be attribute to one pathology [4]. Because the prevalence of PFO is about 27%, most of these cases are related to paradoxical embolism [5]. The prevalence of known thrombophilia’s in VTE trials is lower and ranges from 2 to 18% [6]. Protein C deficiency is a known risk factor for VTE events, but also a risk factor for arterial thrombosis, in particular MI [7,8]. Usually, isolated heterozygous Factor V Leiden mutation does not induce MI, but like in our patient, there have been a few case reports on MI associated with a combined thrombophilia [2,9,10].

Our patient developed a myocardial infarction with non-obstructive coronary arteries (MINOCA) and not surprisingly, one meta-analysis showed an association between MINOCA and thrombophilia [11]. Protein C deficiency has a prevalence of 0.1%-1% in the general population, reaching 2.6% in patients with MINOCA, whereas factor V Leiden mutation has a prevalence of 3%- 7% in Western countries, but affects 12% of MINOCA patients [12]. This patient is at high risk to develop VTE complications, but simultaneous onset of MI and PE was related to his underlying combined thrombophilia. The unusual aspect is that his hypercoagulable state was asymptomatic and probably the association of prostate cancer and recent surgery as risk factors was the trigger for both thrombotic clinical manifestations.

The presence of both PE and STEMI in the same patient is beyond current guidelines, and requires an individualized calibrated approach, especially in the setting of a MINOCA and an increased bleeding risk. Our observation confirms that low-dose alteplase systemic thrombolytic treatment is a safe and effective for intermediate-high risk PE [13,14]. Half-dose lytic therapy with alteplase is not the usual regime for STEMI patients, even if one trial showed that a substantially lower dose of recombinant tPA is effective in Asian patients compared with that required in Western patients [13]. The lower dose alteplase, due to the high bleeding risk of the patient, was the right choice for PE treatment and for STEMI, because the cloth was distal and difficult to resolve with angioplasty. The second CA confirmed the dissolution of thrombus, but also the anticoagulant treatment for 5 days, could had an important role [15].

We choose a DOAC for long treatment after VTE because one post-hoc analysis of RE-COVER, RECOVER II and RE-MEDY studies shows less bleeding and no significant differences in symptomatic VTE/VTE-related deaths between dabigatran etexilate and warfarin in patients with or without thrombophilia [6]. Our case report [Dabigatran 110 mg bid is ongoing, and no adverse events have been reported] is a supplementary evidence that DOACs are a valuable therapeutic option for the treatment of VTE in the presence of major thrombophilia.

• Concomitant PE and MI is not common in the clinical setting and the association is difficult to diagnose because of the similar symptoms and confusing causes. Targeted thrombolytic treatment adapted for specific clinical presentation requires an individualized, calibrated approach, especially in the setting of an increased bleeding risk.

• Combined thrombophilia can be a cause of both PE and MI. Physicians should be highly vigilant in the search of a hypercoagulable status, especially if there is no paradoxical embolism and coronary angiography does not show obstructive coronary artery disease.

• Anticoagulation is still the cornerstone of VTE treatment and in the settings of thrombophilia’s, the evidence we have, suggests that DOACs are safe therapeutic options.

The author/s confirm that written consent for submission and publication of this case report including image(s) and associated text has been obtained from the patient in line with COPE guidance.