Aim: This study aimed to explore the clinical efficacy of Intravitreal injection of Conbercept (IVC) in Diabetic Macular Edema (DME) based on the morphological pattern on Optical Coherence Tomography (OCT).

Methods: In total, 111 cases (115 eyes) with DME were enrolled. They were classified into three groups based on their OCT patterns: Diffuse Retinal Thickening (DRT), Cystoid Macular Edema (CME), and Serous Retinal Detachment (SRD). All cases were treated with IVC (0.05 mg/0.01 ml). The central foveal thickness was measured using OCT. The proportion of capillary nonperfusion was assessed using OCT angiography.

Results: The 115 eyes consisted of 34 DRT, 47 CME, and 34 SRD cases. After IVC, the central foveal thickness in all the groups reduced, and the best-corrected visual acuity increased. The baseline of the DRT group was better than that of the other two groups. The SRD reaction was poor after IVC, and significant differences were found between SRD and DRT or CME. SRD showed statistical significance, but CME and SRD had no significance after 12 months. Foreign body sensation was found in 17/111 cases, conjunctival congestion in 9/111 cases, subconjunctival hemorrhage in 22/111 cases, and postoperative intraocular pressure elevation in 2/111 cases after 12 months. The size of the foveal avascular zone and total avascular area were the same or even greater in eyes with diabetic retinopathy after IVC treatment.

Conclusions: IVC is effective in all three morphological patterns on OCT with fewer complications. In this study, the DRT group showed the best effect.

Diabetes mellitus is a common disease in both developed and developing countries. The duration of diabetes is a major risk factor associated with the development of Diabetic Retinopathy (DR). After 5 y, approximately 25% of patients with type 1 diabetes have retinopathy. After 10 y, almost 60% have retinopathy, and after 15 y, 80% have retinopathy. Among the patients over 30 y old and with duration of type 2 diabetes less than 5 y, 40% of the patients with insulin and 24% of the patients without insulin have retinopathy. These rates increase to 84% and 53%, respectively, when the duration of diabetes is up to 19 y. One-third of the diabetic patients have DR, of whom 7% are affected by Diabetic Macular Edema (DME), which is one of the most important causes of vision loss and legal blindness [1,2]. DME is defined as retinal thickening, which requires a three-dimensional assessment using slit-lamp biomicroscopy and/or stereoscopic fundus photography and Optical Coherence Tomography (OCT) [3]. Many studies are available on DME based on the morphological pattern on OCT. Otani’s et al. put forward that DME could be divided into three types: Diffuse Retinal Thickening (DRT), Cystoid Macular Edema (CME), and Serous Retinal Detachment (SRD) [4,5]. Some eyes had more than one pathological change.

Chronically elevated serum glucose leads to a breakdown of the inner and outer retinal blood barrier. Laser photocoagulation is a traditional clinical trial that has demonstrated its clinical efficacy. However, the conventional (long duration, 100 ms) laser scar expansion in the macula has been associated with enlarged atrophy of the Retinal Pigment Epithelium (RPE) and paracentral scotomas over time [6,7].

Recently, a new drug called anti-Vascular Endothelial Growth Factor (anti-VEGF) was found to be promising in healing DME. VEGF has been implicated in neovascularization and increases vascular permeability [8]. Hypoxia, oxygen-free radical accumulation, and inflammatory mediators result in the expression of VEGF-A [9]. The subsequent breakdown of tight junction-associated proteins within the blood vessels and RPE lead to extravasation of fluid and proteins from the retinal vessels and choroid. The observations in patients and animal models lead to the hypothesis that VEGF is involved in the pathogenesis of DME. Intraocular levels of VEGF are markedly suppressed after intravitreal anti-VEGF [10].

Conbercept, also named KH902, is a recombinant fusion protein containing the second Immunoglobulin (Ig) domain of VEGF receptor1 (VEGFR1) and the third and fourth Ig domains of VEGFR2 and the Fc region of human IgG. This drug potentially inhibits angiogenic pathways involved in DR or other ocular neovascular diseases, and can suppress highglucose- induced migration and sprouting of human retinal endothelial cells by blocking VEGF and placental growth factor. PIGF is another member of VEGF superfamily and also contributes to ocular neovascularization and increased vascular permeability. It can bind to VEGFR1 and have an effect on angiogenesis. Moreover, the affinity of conbercept for VEGF is 50 times that of bevacizumab and 30 times that of ranibizumab. Compared with aflibercept, it has a lower VEGF dissociation rate, higher binding affinity, decreased adhesion to extracellular matrix, and a lower isoelectric point that results in a longer clearance time. The half-life of conbercept has not been calculated in human eyes, but in rabbit eyes, it has been demonstrated to be 4.2 d. A single injection of conbercept in rabbits reduced the ocular-free VEGF concentration over 60 d [11].

This study aimed to explore the efficacy and safety of conbercept, the newest anti-VEGF drug, in treating different patterns of DME.

This observational, retrospective, and noninterventional study involved patients with DME. Among the 115 eyes (54 males (54 eyes) and 57 females (61 eyes)) enrolled for this study, all retinal detachment cases were included in the SRD group (including cystoid cases at the same time), and those without retinal detachment but with cystoid macular edema were included in the CME group. Subjects were included if they had been treated for DME with IVC regularly in the hospital between January 1, 2014, and May 1, 2017. The exclusion criteria included other visually significant ocular pathology such as cataract (cause visual loss apparently) and glaucoma, complications of DR (vitreous hemorrhage, tractional retinal detachment, and so on), loss to follow-up, or incomplete imaging and clinical data.

All injections were given according to a standardized procedure by a single surgeon in an operating room under the complete aseptic conditions with topical anesthesia and insertion of a lid speculum. After disinfection, 0.05 ml of solution containing 0.5 mg of conbercept was injected intravitreally 3.5-4 mm posterior to the limbus with a 30 G (30 gauge) needle through the superotemporal quadrant. Before and after injection, patients were given Levofloxacin eye drop therapy for more than 3 d [12].

All patients were followed up for at least 12 months, and study visits were scheduled at 1 d, 1 w, 1 month, 3 months, and 6 months. Before each treatment and during the follow-up period, they received a complete ophthalmic examination including BCVA, slit-lamp biomicroscopy, dilated funduscopic examination, fundus photography, and OCT. If after injections, the following symptoms were found in the patients: (1) BCVA reduced (>5 letters), (2) Central Fovea Thickness (CFT) thickened (>100 μm), and (3) FFA showing increasing fluorescein leakage, IVC was repeated. Treatment discontinued index was BCVA>84 letters (20/20) in two reviews or stable BCVA in two IVCs.

The pattern of treatment was determined at the discretion of the treating physician. Participants were aged 35-76 y and diagnosed with either type 1 or type 2 diabetes mellitus. HbA1c was controlled at ≤ 10% before involvement in the study and during the treatment period. Visual impairments were due to DME and no other causes in the opinion of the investigator. All eyes included in the study should have a central retinal thickness ≥ 300 μm measured by OCT and BCVA letter score between 20/200 and 20/40 measured by the ETDRS protocol.

A total of 111 patients were enrolled in the endurance extension study between January 2014 and March 2017 (Table 1). 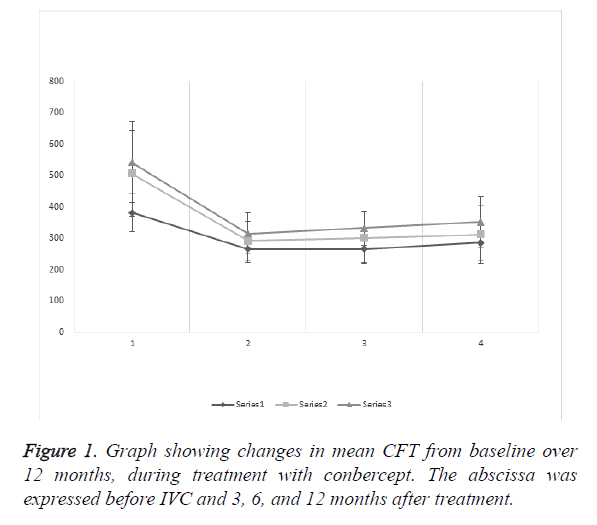 Figure 1. Graph showing changes in mean CFT from baseline over 12 months, during treatment with conbercept. The abscissa was expressed before IVC and 3, 6, and 12 months after treatment. 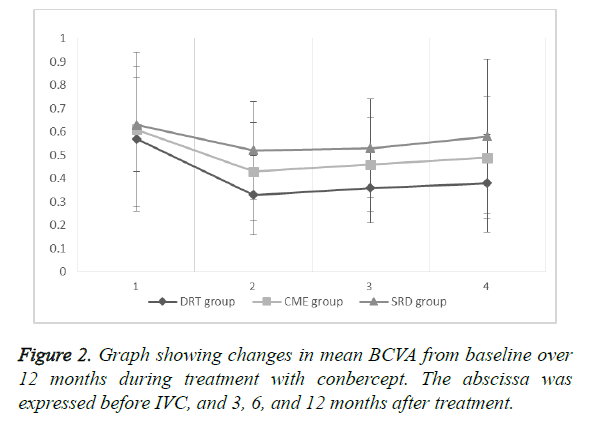 Figure 2. Graph showing changes in mean BCVA from baseline over 12 months during treatment with conbercept. The abscissa was expressed before IVC, and 3, 6, and 12 months after treatment. 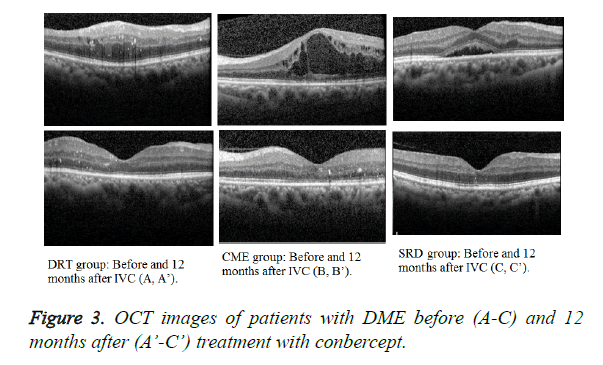 Figure 3. OCT images of patients with DME before (A-C) and 12 months after (A’-C’) treatment with conbercept.

Optical Coherence Tomography Angiography (OCTA) could detect enlargement and distortion of the Foveal Avascular Zone (FAZ), retinal capillary dropout, and pruning of vessel branches. Areas of capillary loss obscured by fluorescein leakage on FFA were more clearly revealed on OCTA. In this study, IVC treatment did not decrease the size of the FAZ and the total avascular area in eyes with DR. Moreover, the FAZ and size of the avascular area had an expansive tendency in some cases (Figure 4). Therefore, it could be concluded that IVC was of no use in retinal ischemia. 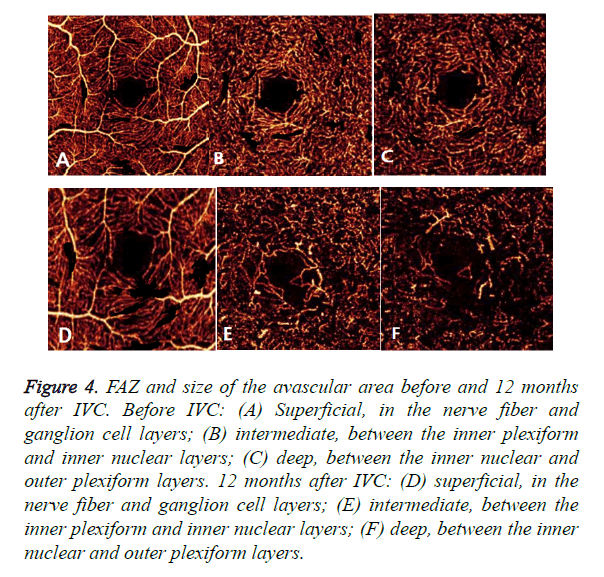 The anti-VEGF drug aims at halting the effects of VEGF on retinal and vascular structures, but it does not alleviate macular hypoxia [15]. Laser treatment can destroy some photoreceptors and induce a complex action on the RPE, thus leading to the reduction of oxygen consumption, increase in the inner retinal oxygen levels, and improvement in retinal hypoxia. Hence, when Modified Grid Laser Photocoagulation (MGP) is used in conjunction with IVC, it helps in reducing the macular hypoxia, decreasing the rate of recurrence of DME, and prolonging the effect of IVC. Furthermore, reduction in macular thickness and restoration of retinal transparency achieved by IVC facilitate laser treatment and reduce the need for high laser energy [12].

This explains why some DME patients showed less effect with anti-VEGF treatment.

Some studies found that DRT had neither cystoid degeneration nor subretinal fluid. Perhaps DRT is the early change in DME, and therefore has a favorable prognosis [16]. According to the histopathologic report in autopsied eyes with retinal edema, DRT initiates in the intracytoplasmic swelling of the Muller cells [17]. Sponge-like swellings in the OCT image may represent intracytoplasmic swelling of Muller cells. According to histopathologic studies, the outer plexiform layer or Henle’s fiber layer is markedly swollen in macular edema. If retinal edema persists, liquefaction necrosis of the Muller cells ensues. Necrosis of the Muller cells and adjacent neural cells leads to cystoid cavity formation in the retina [18]. The histopathologic study of CME demonstrated that cystoid spaces were located not only in the outer plexiform layer but also in the inner plexiform and granular layers and even in the ganglion cell layer [19]. CME in diabetes had been associated with VEGF factors, prostaglandin, and inflammatory cytokines; therefore, anti-VEGF alone had no obvious effect in eliminating CME and improving visual acuity. However, in this study, IVC treatment still could improve function and morphology in patients with CME. Two kinds of cystoids are found: the bigger one located in the outer plexiform layer, and the smaller one in the inner nuclear layer. Whether the type will influence treatment can be a new research direction [20].

The pathogenesis of SRD is mainly retinal pigment barrier dysfunction, leading to extravasation of fluid and proteins from the retinal vessels and choroid. Sustained retinal ischemia and inflammation distort the RPE layer architecture. The destruction of the RPE layer is implicated in the pathogenesis of SRD. No study has reported the role of VEGF, but IVC still can influence SRD [21]. This can be a new research direction in the future.

Compared with preoperative OCTA images, the parafoveal and perifoveal vessel densities were not significantly reduced in eyes with IVC, and the FAZ area and total avascular area were the same or even greater in eyes with IVC. One reason perhaps was that IVC treatment could not modify retinal ischemia symptoms. Another reason was DR normal progression. Macular ischemia is associated with visual function and useful for predicting DR progression. In the age of anti-VEGF therapy for DR, the assessment of macular ischemia may become more important because the effects of anti-VEGF therapy can obscure clinical findings that predict the risk of progression. Thus, OCTA could be used for high-volume applications such as the routine screening of DR [22].

Above all, before anti-VEGF treatment, the prognosis can be predicted based on the OCT patterns.

This single-center retrospective study evaluated the anatomical and functional outcomes during 12 months of follow-up in patients with DME. This study had limitations. This was a nonrandomized, retrospective, and single-centered study, which precluded any estimation of the efficacy or safety of IVC with or without MGP. Moreover, the influential factor of the laser therapy was not excluded during the IVC treatment, although many studies demonstrated no differences in efficacy between the anti-VEGF alone and anti-VEGF plus laser.