Aims: Objective analysis and evaluation of fetal heart rate (FHR) with continuous, sleepless and restless computer action. Methods: The first step was composed of HP 2100A minicomputer, paper-tape puncher and reader for FHR, Teletype keyboard and printer, author?s own program with BASIC interpreter. The second one was MT140 micro computerized simple FHR data printer for single pregnant woman, then the 4th one was central-computerized time-sharing parallel working computer for multiple deliveries, composed of expert system, artificial neural network computer and FHR frequency spectrum analyzer to diagnose sinusoidal FHR and the loss of variability, with rapid and direct pathologic FHR reporting system to attendant physician. The 2nd to 4th ones were TOITU product. Results: FHR data were analyzed and printed FHR continuously, the 4th one resulted significantly reduced perinatal mortality and the loss of cerebral palsy, confirming the effect of direct reporting system. Conclusion: Computerized FHR monitoring system is not only automatically analyze FHR changes, but also clinically improved perinatal medicine.

Fetal monitoring performed by the cardiotocography (CTG) was effective by continuous visual monitoring of obstetric staffs, which was subjective and troublesome, developing inter-observer differences. Maeda created objective FHR score which was objective and possible to be computerized for further improvement. Maeda developed the first mini computerized automated FHR analysis with objective pattern classification [1,2], Dawes analyzed beat-to-beat interval difference which was abnormal if it was less than 4 mS [3-6], while it was claimed because the sauce FHR data was ultrasonic Doppler autocorrelation.

The FHR and ST changes were studied with scalp lead FECG, but needle electrode was canceled by possible mother-fetus viral infection, instead external Doppler autocorrelation FHR was commonly introduced as its variability was similar to direct FECG.

The external technique to study FHR was introduced into the long term FHR variability in computerized diagnosis [1,2]. Also the ultrasound Doppler fetal movement signal made it possible to study fetal actocardiogram (ACG), where even fetal brain function was discussed [7].

The possibility of computerized fetal monitoring was created in single parturient woman by minicomputer and microcomputer, and then changed central computerized analysis of multiple fetuses using the time-sharing computer system [8].

Pathologic FHR changes detected by computer analysis were primarily informed paper written report, but it was changed to direct report to attending doctor by LAN or telephone mail. The direct report will promote the therapeuic process to cure the asphyxic fetus and then reduce the mortality and brain damages [9].

As the continuous fetal monitoring at bedside was time consuming and subjective, computerized fetal monitoring was introduced by Maeda [1,2,8-12], Dawes [3-6], SisPorto system [13] and many researchers after 1980 [14-17].

The purpose of FHR monitoring was to prevent fetal death in the past, while it also aims to prevent cerebral palsy caused by fetal brain damage. It was achieved in the early period of FHR monitoring in Japan as shown in Figure 1, while it was disappointing in Dublin RCT by scalp needle electrode FHR monitoring in the electronic fetal monitoring (EFM), as cerebral palsy did not reduce. It may be caused by the purpose of EFM, which was to prevent intrapartum fetal death, while the fetus was not monitored in pregnancy in the EFM. Also there may be mother-fetal viral infection through the needle electrode. They were the reason why external monitoring was mandatory, as has done in Japan, by the FHR recording by fetal heart tone or ultrasonic Doppler autocorrelation method. 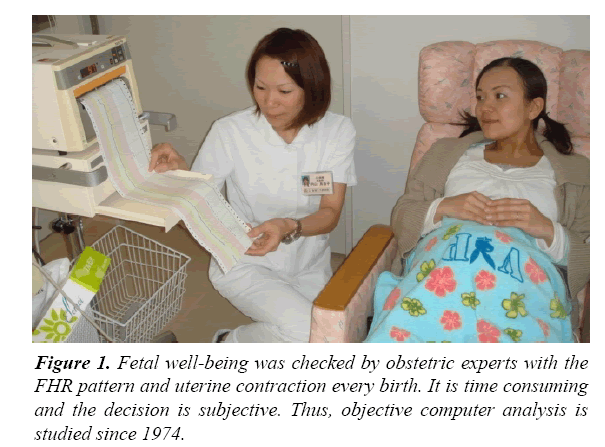 Figure 1: Fetal well-being was checked by obstetric experts with the FHR pattern and uterine contraction every birth. It is time consuming and the decision is subjective. Thus, objective computer analysis is studied since 1974.

Maeda designed and TOITU provided Asia-first fetal monitor with fetal heart tone in 1964, where the FHR was monitored individually by obstetric staffs as in Figure 1, then perinatal mortality and cerebral palsy were reduced. Autocorrelation FHR meter was introduced in 1975, then ultrasonic Doppler fetal actocardigram for the FHR and fetal movement was created by Maeda in 1984 [18]. 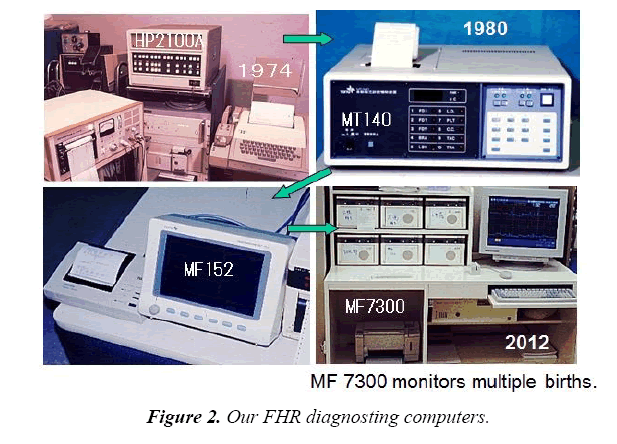 As common FHR patterns were subjective and unable to be analysed by computer, they were numerized in Maedas program, and analysed in 5 min [2].

FHR baseline was determined averaging FHRs in the most FHR data step, and long term variability was the sum of sequential FHR increases (Figures 3 and 4). 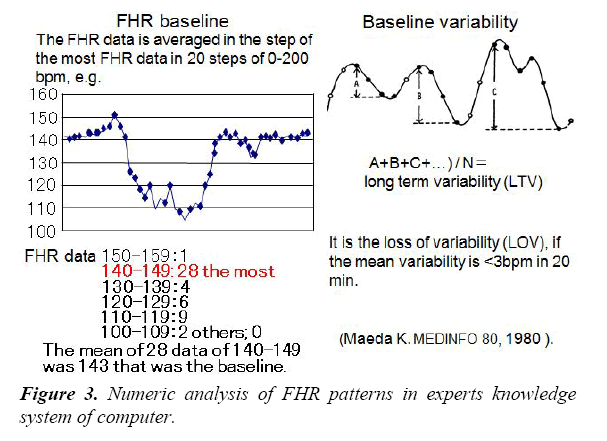 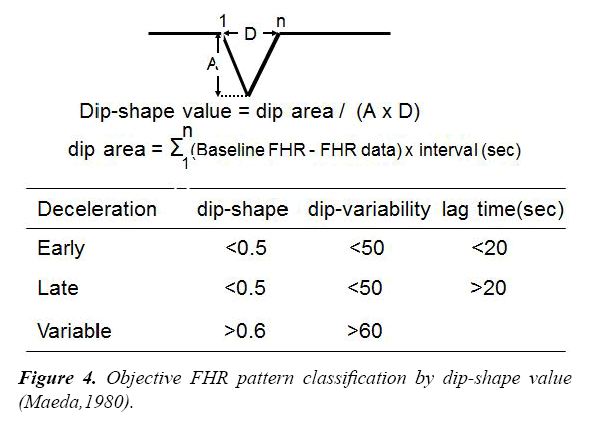 Early deceleration (ED) and late deceleration (LD) was “V” shaped, while variable deceleration (VD) was “U” shaped in visual impression, where the patterns were numerated using “Dip-shape value” as in Figure 4. “Dip shape” was the dip area, which was the sum of FHRs in the dip multiplied by 2 s, divided by the area determined by the product of Amplitude x Duration in Figure 4, where the dip-shape value was less than 0.5 in ED and LD, and larger than 0.6 in VD. The dip variability was larger in VD than ED and LD, thus they were differentiated by computer, Furthermore, The lag time between contraction peak and deceleration dip was larger than 20 sec in LD.

As the FHR pattern was changed to numeric values as shown in Figure 5, which was analyzed by computer, FHR traces were tried to be diagnosed by FHR score (Table 1). Neonatal outcome was damaged by high FHR score as in Table 2.

FHR score is abnormal when it is 10 or more, and severely abnormal if it is 20 or more. (Maeda K et al. Pathophysiology of Fetus, 1969)
FHR score is 5 min sum of abnormality scores, i.e. it is an index of abnormal FHR. The data were studied in non-interventional labors in 1960s.

Ta was the area under the whole power spectrum.

Obstetric staff had to diagnose FHR record sitting bedside in the labor for more than 10 hours in the visual FHR diagnosis in the past. The heavy work was discarded when computer was introduced in FHR monitoring, improving other clinical works to make outcome of patients better at delivery.

Any error caused by subjective misreading of FHR trace did not occur in objective computerized FHR diagnosis, because new technique does not use FHR pattern classification.

Simplification of analyzing technique utilized by computer made the FHR diagnosis more simple and fast than the past visual analysis of FHR curve.

Fetal outcome was predicted by the FHR score, hypoxia index, A/B ratio and frequency spectrum in the computer analysis. 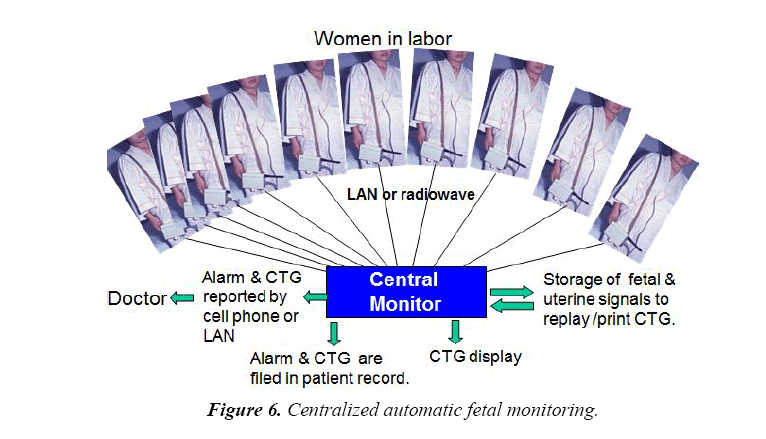 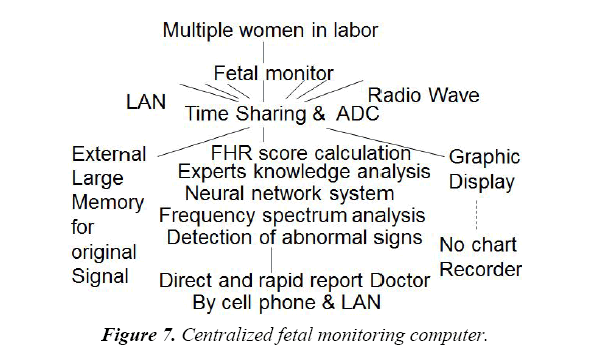 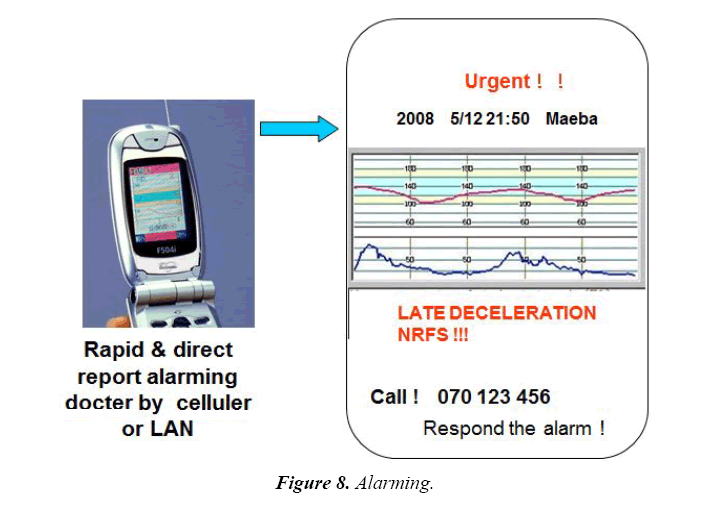 1. Probability (%) to be normal neonate

2. Probability (%) to be suspicious outcome

3. Probability (%) to be pathological outcome

The 3 neural network probabilities were coincided with the FHR scores obtained in the same fetuses [9].

Pathologic sinusoidal FHR, which was severe fetal anemia close to fetal death, was diagnosed by the FHR frequency spectrum analysis of FHR, when the La/Ta ratio was 30% or more and at the same time PPSD was 300 bpm2/Hz or more.

Alarming reports, which was directly and rapidly sent to doctors from computer by cellular phone (Figure 8), LAN etc., are as follows promoting prompt therapy;

Acute bradycardia and its duration results high hypoxia index which is the duration of bradycardia (min) × 100 divided by FHR nadir (bpm) were instantly calculated and reported the doctor to promote suitable treatment.

Loss of variability, reduced variability and loss of acceleration are signs of fetal brain damage, which are reported to the doctor.

NRFS (fetal distress) is also reported to the doctor.

Technical error: large noise or probe detachment is announced to the doctor [8] (Tables 5 and 6).