Background: To systematically assess the effectiveness and safety of tirofiban in patients with non-STelevation acute coronary syndromes (NSTE-ACS).

Methods: We search the online databases in both English and Chinese from inception to 2017 to collect randomized controlled trials about tirofiban for NSTE-ACS patients in early medicine conservative treatment. Two reviewers independently screened literature according to the inclusion and exclusion criteria, extracted data, and assessed methodological quality of included studies.

Conclusions: Compared with routine treatment alone, tirofiban has better therapeutic effects in early conservative treatment for patients with non-ST-elevation acute coronary syndromes, but the incidence of bleeding is relatively high.

Acute coronary syndrome (ACS) is a set of clinical syndromes whose pathological basis is coronary atherosclerotic plaque rupture or erosion, and then complete or incomplete occlusive thrombus form, including ST-segment elevation myocardial infarction (STEMI), non-ST-segment elevation myocardial infarction (NSTEMI) and unstable angina (UA) [1]. Even in the modern treatment conditions, the mortality, myocardial infarction rate and the re-admission rate of patients with acute coronary syndrome are still very high. ACS represents the performance of atherosclerosis of life-threatening. It is usually caused by the coronary atherosclerotic plaque rupture or erosion induced acute thrombosis. During the process of atherosclerotic plaque rupture, the release of inflammatory cytokines and inflammatory response occurs are critical pathologic physiology factors [2].

Percutaneous coronary intervention (PCI) is one of the most effective and common treatment of ACS. Especially for highrisk patients with ACS, clinical benefit of PCI is more pronounced [3,4]. The GP IIb/IIIa receptor antagonist approved listing used in ACS and PCI are in three categories: monoclonal antibody Fab fragment, synthetic peptides (such as eptifibatide), non-peptide biomimetic (such as tirofiban and lamifiban) [5]. In recent years, these drugs used in clinical practice, and have confirmed its efficacy in many clinical studies. However, the application of platelet glycoprotein IIb/ IIIa receptor antagonist in clinical practice still has some detail questions. In this study, we used Cochrane systematic review methods to make a Meta-analysis of randomized controlled trials of tirofiban for acute coronary syndrome patients undergoing percutaneous coronary intervention, in order to correctly assess the efficacy and safety.

The primary outcomes were incidences if cardiovascular events within 1 week and 30 days after treatment, including refractory myocardial ischemia, acute myocardial infarction, and sudden cardiac death. The second outcomes were incidences of bleeding events. JFZ and XDX extracted the following information: the first author, year of publication, age of trial and control group, male and female of both groups, sample size, prevalence of hypertension and diabetes.

We assessed the quality of included studies via the risk of bias tool recommended by Cochrane handbook [6]. This assessment tool consisted of the following seven items: random sequence generation; allocation concealment, blinding including study design and outcome assessment, selected reported data, incomplete data, and other potential bias. We identified each item as low risk, high risk or unclear risk according to reported results of each study when one item was judged as high risk.

We used relative risk to assess the effectiveness and safety of tirofiban in patients with NSTE-ACS. We firstly assessed the heterogeneity within studies through Chi-square test and I2 statistic [7]. Heterogeneity was confirmed when P<0.05 or I2>50%. The random-effect model would be used to pool the results when there was heterogeneity, or else the fixed-effect model would be used. We conducted sensitivity analysis by excluding one studies each time. We used Begg’s and Egger test to assess the publication [8,9]. All statistical analyses were completed on Stata 14.0 version software. P<0.05 was treated as the significant level.

Characteristics and quality of included study

Our initial search returned 458 records, including 456 records through databases searching and 2 records identified through other sources. Finally, 10 studies were included in qualitative synthesis and quantitative synthesis [10-19]. The study selection was presented in Figure 1. The characteristics of included studies were presented in Table 1. Ten studies were published from 1998 to 2014. Six studies were from Asian population and the rest were from European population. The mean age was more than sixty-year old, and included 6405 study subjects. According to the scale, seven studies conducted study subjects through random number table methods, and three followed the order of registration. All studies used blinding methods. The quality of studies was relatively high. 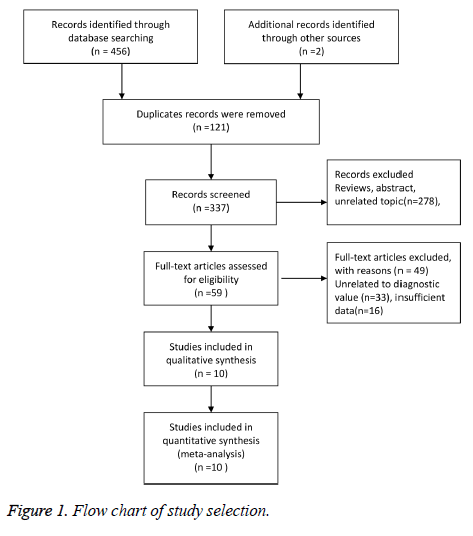 Table 1. Characteristics of included study in the meta-analysis. 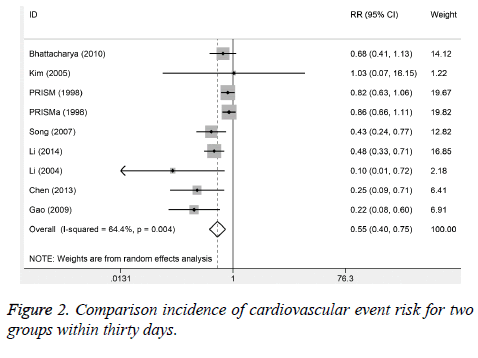 The present study found that tirofiban has better therapeutic effects in early medicine conservative treatment for patients with non-ST-elevation acute coronary syndromes compared with routine drugs. However, patients who received combined tirofiban have higher risks of bleeding. Several ACS treatment guidelines recommend the early use of PCI treatment strategies [20,21]. However, during the pathogenesis of ACS and PCI intraoperative and postoperative have coronary endothelium damage, intimal exposed, platelet adhesion, activation and degranulation and the release of vasoactive substances such as ADP, 5-serotonin, etc., to induce further platelet aggregation activation, platelet glycoprotein lib/Ilia receptor conformational change, expose the fibrinogen binding sites of activated platelets, by the conformational change of the glycoprotein lib/Ilia receptor cross-linking with fibrinogen, and ultimately a large number of platelet aggregation, thrombosis, to cause ACS ischemic complications occurred, form stent thrombosis or mural thrombus, leading to the occurrence of adverse cardiac events [22]. From these pathogenesis of acute coronary syndrome ischemic complications, we can see that, platelet aggregation plays an important role. Platelet glycoprotein IIb/IIIa is one member of integrin adhesion receptors family, is the most abundant platelet membrane glycoprotein, its ligands are fibrinogen, von Wille brand factor, glass connected proteins, fibronectin protein. GP IIb/Ilia receptor antagonists by blocking the final common pathway of platelet aggregation, can effectively improve myocardial ischemia, reduce the incidence of mortality and myocardial infarction of patients [23]. With acute coronary syndrome. And the GP IIb/IlIa receptor is only found in the platelet and macrophage lineage, this feature enables specific treatment of its antagonists, without fearing of causing a wide range of side effects [24]. The appearance of platelet GPIIb/IlIa receptor antagonists is the milestone event in the history of ainti-platelet drug development [25]. Compared with the monoclonal antibody Fab fragment abciximab, small molecule GPI GP IIb/ IIIa receptor antagonist have a higher binding specificity, stronger role, and reversible combination, so, adverse reactions can be discontinued soon by immediately discontinued the drag, and as a synthetic peptide, themselves almost without antigen, do not cause allergic reactions, can be a long time or repeated treatment.

In 2013, expert consensus recommended tirofiban for STEMI patients when patients did not receive enough double resist treatment [17]. Patients with high risk STEMI can be given to tirofiban before they are transferred to the emergency PCI. The GPI is not recommended for patients who have received both treatment and anticoagulant therapy.

This is consistent with the application of GPI drugs in acute ST-segment elevation myocardial infarction and treatment guidelines in 2015 [26]. For UA/NSTEMI patients, early invasive treatment was advised, if only use of aspirin and anticoagulation, tirofiban a combination therapy was recommended. If patients have double resistance treatment, but there are some risk factors such as diabetes, a positive troponin, and ST segment moving, and bleeding risk is low, it still can be used. For patients who are at high risk of bleeding and thrombosis, if they have been treated with double resistance, they are not recommended for early use of tirofiban.

Several limitations should be addressed. Firstly, we only search the published studies, some unpublished data may be ignored. Second, two studies were conducted in 1998, Clopidogrel was not widely used in clinical practice. Our results also found that heterogeneity existed within studies. The reason could be different intervention. Third, these results should be cautious because of different population setting. Further study is required.

In conclusion, early application of tirofiban was recommended for patients with non-ST-elevation acute coronary syndromes. However, the bleeding should be concerned.