Component analysis of prostatic calculi and the causes of calculus formation

Objective: To analyze the chemical components of prostatic calculi.

Method: An infrared automatic analyzer was used to determine the chemical components of prostatic calculi from 86 patients, and the causes of formation and related clinical data were examined.

Results: Magnesium ammonium phosphate and carbapatite were found in 84.9% of calculi, and the difference in the comparison with urinary infection was statistically significant. The components of prostatic calculi differed significantly from those of the urinary tract, and their formation was related to many factors.

Conclusions: Prevention of prostate infection can effectively reduce the occurrence of prostatic calculi; healthy lifestyles and habits are of great significance in calculus formation.

Prostatic calculi have a high occurrence rate, which is related to the improvement in living standards and changes in dietary structure and lifestyle. Prostatic calculi are common, and are related to prostatitis, which can lead to prostatic cancer [1,2], but there is no link between calculi and prostatic cancer [3]. Calculi are formed in prostatic tissue and acini, and are caused by the deposition of calcified substances on the corpora amylacea [4]. Some studies have reported that prostatic calculi are seen in patients with recurrent bacterial urinary infection [5], which may be a cause of calculi. Other causes include radiotherapy, transurethral prostatectomy, prostate stent therapy, and ochronosis due to alkaptonuria. Patients with prostatic calculi usually have no symptoms, but large calculi may result in uroschesis, prostatitis, and chronic pelvic pain syndrome [6,7]. Bladder stones in men with benign prostatic hyperplasia are thought to be secondary to bladder outlet obstruction induced by urinary stasis [8]. It is still not clear whether formation of prostatic calculi is related to benign prostatic hyperplasia. Moreover, there are no uniform standards for treatment and prevention of prostatic calculi. It has been reported that prostate cancer is related to chronic prostatitis [9], but not to urinary calculi [10].

A total of 86 specimens were collected from 86 patients with prostatic calculi combined with prostate hyperplasia, which underwent surgery in our hospital from October 2009 to October 2013. Very small calculi were excluded. This study was conducted in accordance with the declaration of Helsinki. This study was conducted with approval from the Ethics Committee of Yanan University. Written informed consent was obtained from all participants.

All agents were milled to powder in a mortar, and completely desiccated in an HW-3A temperature-controlled drying cabinet for about 48 h (temperature range: 110-150°C). Calculi were collected and washed, and then dried at room temperature. The calculi were also milled to powder. Then, 200-300 mg of dried potassium bromide and 1-2 mg of powdered calculi were combined in a mortar, resulting in an optimal dispersive concentration range of calculi in potassium bromide of 5%-10%. The mixture was then dried in the drying cabinet (100°C) for 5 min, and then milled for about 30 s. Next, the powder was compressed with a performing machine (Qingdao Huaqing Group) at 20 mPa for 1 min; the tablet thickness was about 0.3-0.5 mm. The major components of the calculi were determined using an LIIR20 infrared spectroscopy automatic analyzer. The types of calculi were confirmed according to characteristic band peaks.

Statistical analysis was performed using SPSS 17.0 software and the major indicator was a component ratio. The chi-square test was used for comparisons of multiple groups, and P<0.05 indicated a significant statistical difference. 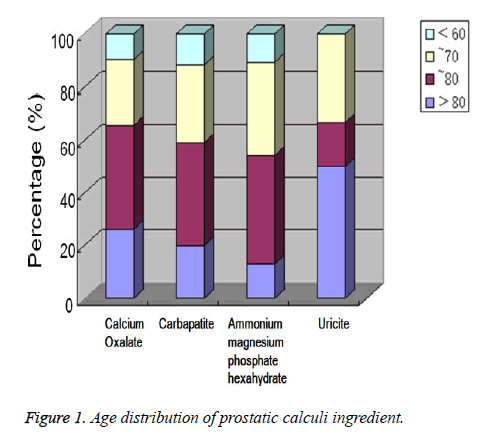 Distribution and complications of prostatic calculi 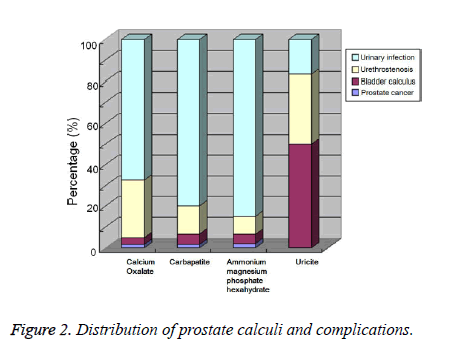 Presently, the mechanism of prostatic calculus formation remains unclear; some reports showed that prostatic calculi are made up of the deposition of sloughed epithelium and prostatic secretions, and the major components include calcium phosphate and calcium carbonate [12]. Possible contributors to the formation of prostatic calculi include infections, which promoted the shedding of epithelial cells and the blockage of prostatic crypts. For example, when chronic inflammation develops in the prostate, the alveoli dilate and the ducts become narrowed; this might result in a backflow of urine into the prostate, and crystals in the urine could precipitate in the glandular tissue and form calculi. In addition, when inflammation occurs, the components of prostatic fluid change, and foreign matter including leukocytes and bacteria increase; inorganic salts or Ca2+ adhere more easily and then form calculi. Other authors suggested that microcalcification inside the prostate was a benign process of intra-prostate dystrophy and prostate dysfunction [13,14]; similarly, there was also a correlation between inflammation, location of bacterial infection, and their duration [15]. Recent studies confirmed that nanobacteria may be a critical etiological factor in prostatitis [16]. It is still unclear whether infections play primary roles or are just a minor complication during the formation of prostatic calculi. This study analyzed the components of 86 calculi using infrared spectroscopy, and the results showed that mixed calculi were the predominant type, with a rate of 80.2%; 26.7% were a mixture of carbapatite, calcium oxalate monohydrate, and calcium oxalate dehydrate; 18.6% were a mixture of ammonium magnesium phosphate hexahydrate, carbapatite, calcium oxalate monohydrate, and calcium oxalate dihydrate. Calcium oxalate calculi and carbapatite had high detection rates in all components of prostatic calculi, at 70.9% and 68.6%, respectively. The above results were in line with previous studies.

Studies have demonstrated that the occurrence of prostatic calculi was related to prostate hyperplasia, prostatitis, and prostatic cancer [17]. Calculi are classified into four types, according to the primary components: calcium, infectious, uric acid, and cystine. Infectious calculi contain ammonium magnesium phosphate and carbapatite [18]; 84.9% of calculi in this study were infectious. Furthermore, an analysis of the relationship between prostatic calculi and hyperplasia revealed that 70.73% of patients had an associated urinary infection, and that infectious calculi comprised of an average 68.6% carbapatite and 53.4% ammonium magnesium phosphate hexahydrate, indicating that prostatic calculi were correlated with urinary infection. It is still unclear whether these symptoms are caused by the calculi or the associated glandular inflammation. Some studies also reported that the major types of lower urinary tract calculi in adult men were simple uric acid or mixed uric acid calculi [19]. Uric acid could promote the formation of calcium oxalate calculi. With prostate inflammation or hyperplasia, expanding acini cause tube narrowing and force urine reflux, inducing formation of calculi [20]. In this study, 6 calculi, including 3 bladder calculi, contained uric acid. This implied that prostatic uric acid calculi might be related to urine reflux. Therefore, in patients with prostatic calculi plus urinary infection, improvement in living conditions, enhanced medical care, and timely treatment of urinary infections would be very important in prevention of prostatic calculi.

In this study, the incidence of infectious prostatic calculi was 84.9%, which was significantly higher than that for urinary calculi reported in a previous study [21]. This indicated that the formation of prostatic calculi is related to prostate infection. Some studies suggested that the recurrence rate of infectious calculi was higher than for other types of calculi, which might be related to recurrent infection of the prostate with bacteria that are difficult to eradicate. One study found that patients with chronic prostatitis/recalcitrant chronic pelvic pain syndrome who received anti-nanobacterial therapy had a decrease in size of some prostatic calculi after therapy [22]. The formation of calcium oxalate calculi was associated with congenital urinary tract deformities, primary hyperparathyroidism, and renal tubular acidosis; moreover, patients whose diet includes foods with high oxalate, protein, salt, tea, and alcohol develop calculi more easily. Uric acid is the final product of purine metabolism, and uric acid calculi are caused by hyperuricemia and hyperuricuria. Acquired uric acid calculi are mostly found in patients with gout, malignant tumors, and gastrointestinal diseases; of course, patients who consume acidic foods, meat, seafood products, and alcohol have a greater risk of developing calculi.

Supported by Scientific research of Yanan University affiliated Hospital (2012YDFY-Y316) and the Key Experimental Programs of Tumor Prevention of Yanan City (No.2014-78).